Marx & Philosophy Review of BooksReviews‘Washington Bullets: A History of the CIA, Coups, and Assassinations’ by Vijay Prashad reviewed by Aidan Ratchford 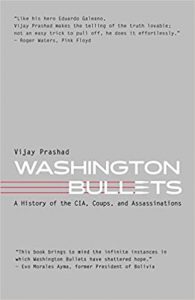 Vijay Prashad
Washington Bullets: A History of the CIA, Coups, and Assassinations

Washington Bullets offers a quasi-encyclopaedic account of United States (US) imperialism, referencing the countless occasions the class struggle has been fractured. It is a short guide to the long history of one country’s quest for ‘preponderant power’ (25), from 19th century colonialism all the way up to the 2019 coup in Bolivia, and modern, more creative methods of subordination. But this is not merely a chronology of all the times Washington Bullets have ‘shattered hope’ (11). There is an underlying structure detailing the historical, legal, and cultural frameworks which have been central to US imperialism, dissecting the various ways Washington has orchestrated the demise of progressive movements. There is, for example, a step by step practical guide of the overthrow of Guatemala’s Árbenz – the US’ very own ‘manual for regime change’ – and a guide to how imperialism has transformed Haiti into a ‘republic of NGOs’.

The history of interference, sabotage, assassinations – the history of crushing revolutions – is not one that can be fully examined in this short volume. Instead, Prashad’s guidebook to US imperialism acts as a springboard for readers for their own journey in understanding imperialism and the role of the US in global politics. Reference is made to economic sabotage in Cuba, Venezuela, and Russia; to trampled revolutions in Afghanistan, Nicaragua, and Grenada; to hybrid wars, outright killings, and other forms of subversion from Burkina Faso to Greece; Iran to Iraq; from Indonesia to Japan. From these small pockets of history readers can both appreciate the sheer ubiquity of US imperialism, and also choose from the numerous case studies of interference to further their own analysis.

In Part 1 Prashad provides a historical context for the emergence of the US as a supreme power, citing the 19th century carving up of Africa for the colonial powers, the ‘internal colonization’ of Mexico (58), and the genocide of the Native peoples as early examples of an imperial identity. Conquests were pursued through legal frameworks, and a concomitant reframing of such policies as ‘spheres of influence’, ‘expansionism’ and ‘frontier settlement’ served to mask the devastation they caused. The foundations of the US as an imperialist power – often orchestrated through legal means – and the paradoxical outward insistence of the US as arbiter of human rights and liberalism, are two fundamentals of this account.

The key argument made by Prashad in the first section concerns the balance of power in the Cold War period. He emphasises that the fundamental contradiction after the Second World War was not between the East and West (Cold War), but rather between the Global North and Global South (imperialism vs. decolonisation). This contradiction shaped US imperialism as the superpower sought to both publicly accept the inevitable process of decolonisation, and privately pursue more covert methods of subversion in the extension of its hegemony.

Two important points are raised in this section and built on throughout. Firstly, it is essential to view US imperialism as shaped by its relation to the movement of decolonisation. While endless acts of sabotage occurred to shatter attempts at genuine national liberation, the revolutionary wave of the latter half of the 20th century represented an opposition to US preponderance, as well as solidarity with, and a protection blanket for, emerging anti-colonial and non-aligned countries. US imperialism, then, held a dialectical relationship with the liberation movements – it was both checked by and a direct further consequence of them; leaders were assassinated and imperial interests were maintained, but the struggles for independence and the revolutionary energy could not be contained. The Third World Project, as well as the Soviet Union, represented genuine material and symbolic support for revolutionary projects across the Global South, and their ultimate collapse has, for Prashad, constituted the biggest impediment to countering US imperialism today.

Secondly, Prashad highlights the mass propaganda that has been integral to US history; much like the assertions of ‘frontier settlement’, late 19th century wars for resources and for expansion in the Americas were framed as ‘liberation wars’. Meanwhile, far-reaching cultural exports in the post-war era helped the most destructive military regime on the planet weaponise ‘freedom’ and ‘free world’ to become synonymous with the nation responsible for subduing freedom throughout the Global South. The complete destruction of Iraq is one of numerous examples in contradiction with the view of the US as a ‘peace-loving’ nation. This cultural investment has been so efficient that half a million dead Iraqi children – a direct result of the US sanctions regime – did not disavow the US as arbiter of human rights.

Part 2 outlines the ‘Manual for Regime Change’, a set of methods employed to remove democratically elected leaders with the audacity to ‘assert the rights of the […] people to its own land and labour’ (74). The processes designed to regain imperial control include fabricating internal dissent, causing economic sabotage, funding opposition groups, assassinating key leaders, and media outlets willing to ignore foreign interference and report a coup as a ‘popular uprising’. The 1950s overthrow of Árbenz in Guatemala represented a blueprint for US-led coups, and as such the book treats this case with far more detail than any other. The nine stages of regime change are striking for the lengths taken to covertly depose a democratically elected leader who attempted moderate agrarian reform. Indeed, readers familiar with any nation in the Global South which has attempted to escape underdevelopment, to challenge foreign monopolies, or simply to advance the health of its people – all of which are paradoxical to US imperialism – will be immediately aware of why the case of Guatemala is the blueprint for coups; these methods have consistently been used against the Global South.

Additionally, Prashad considers the collapse of the Soviet Union and Third World Project, and its two principal consequences. Firstly, these projects, as alluded to above, proved obstructive to US hegemony. According to Prashad, it became much easier without the ‘shadow of the Third World and the Soviet Bloc’ (76) to effect regime change; with no genuine global opposition to US hegemony, it has been far easier to bring forth devastating sanctions regimes, to manufacture political consent for asymmetrical wars, and to isolate nations. ‘Democracy’ and ‘freedom’ remain terms both paradoxical to US foreign policy and intrinsic to their attempts at discrediting genuine democracy and freedom in the Global South. ‘Freedom’ itself does not mean freedom of resources, to eat, to learn, to strive for self-determination; it means free elections and free press – with obvious caveats, and unless of course a leader keen to genuinely develop their nation is elected.

The ‘free world’, now synonymous with the West, and with the US as its ringleader, became such through a combination of cultural investment, construction of institutions, and incessant propaganda (90). This ties into the second important consequence of the revolutionary wave which, for the author, has now been forgotten. While the so-called ‘War on Terror’ became the new permanent replacement enemy for the West, the ‘revolutionary energy’ (56) of the 20th century has been obfuscated; that small nations could defy US imperialism, that real democracy could be taken, not offered up by liberalism, that people could build ‘a new society out of the detritus of the colonial order’ (56). Prashad urges the reader not to allow the national liberation movements to be forgotten, or obscured. We cannot allow the ‘condition of amnesia’ (56) to undermine the revolutionary progress of last century; we cannot allow the West to reestablish itself ‘as the architect of humanity’ (57).

Washington Bullets is an important account of the role played by the US in global politics. Using sources from the CIA itself, Prashad’s book is as much a reminder of what is possible, as it is of the long list of times hope has been crushed. Complex processes are explained unambiguously, which is perhaps its biggest strength; capital infiltration, monopolistic control, propagandist methods – these are all central to the maintenance of US global hegemony – and they are explained here simply yet assiduously. Washington Bullets will not give readers a comprehensive historical analysis of any particular revolution, or of any precise point in US history; but that is not what it sets out to do. This short handbook instead constitutes both a foundational analysis of the history of US imperialism, as well as an eloquent, timely reminder of the need to reclaim the revolutionary energy of the 20th century.

This book exists in conjunction with countless other histories of revolutions and sabotage; it will speak to a much wider bookshelf on CIA plots, economic sabotage, destruction of the class struggle, and the pervasive influence of the West. It is a succinct look at the ways in which capital permeates through institutions, trade organisations, banks, transnational corporations; all the ways that Washington has persistently found new methods in the cultural, economic, political, and military spheres to maintain US global hegemony. But while regional solidarity in the Global South has, for Prashad at least, become the new enemy of imperialism, this is a book ultimately about hope. The ‘defeat of the US in Venezuela’ (142), Global South resistance and solidarity, and, most importantly, the reality of the staggering efforts that have been exerted to crush the revolutionary wave, despite which there remains resistance; and therein lies the optimism and the lesson to take from Washington Bullets.