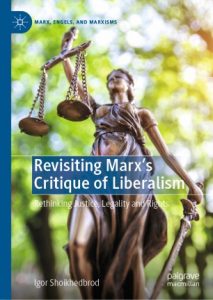 Igor Shoikedbrod has given us a strongly argued and rigorous engagement with Marxist theory, which is – in the opinion of this reviewer – a great pleasure to read, and from which there is much to learn. However, the title is perhaps misleading. Marx never provided a critique of liberalism as such, as a political ideology. I will turn finally to what Marx thought of Liberals, or Whigs as they were then called.

In my view the title to Chapter 5, “Contemporary Responses to Marx’s Critique of Liberal Justice” gives a much better idea of what the book is about. This chapter contains incisive and powerful critiques of some leading contemporary theorists of liberal justice: John Rawls (141-150), Jürgen Habermas (150-159), Axel Honneth (159-169), Nancy Fraser (169-173). As Igor points out, Marx’s journey from philosophy to law “formed the basis for his critique of formal liberal justice” (173). And these four scholars “have tried either to respond directly to Marx’s critique or to modify his critique in the light of the challenges presented by global financial capitalism.” (173)

Igor, however, goes further than explicating Marx’s “critique of formal liberal justice”. He has a much bolder claim, which provides the backbone to his book: that a “major premise” of the development of Marx’s materialist theory of history was his “new materialist conception of right” (Igor’s emphasis, 34). On the following page Igor explains that this is “historically situated and is based on the view that different standards of right apply in different modes of production”. Igor has chosen to translate the German Recht as “right”, meaning a system of law and justice (2); “rights” would be Rechte. He is quite right not to translate Recht as “law” or “the law”. “Law” and “the Law” are the subject of considerable mystification, even partially concealed veneration, by many “critical legal” and, in particular, “post-modern” scholars. Law is given a status and significance which, for Marx and Engels, it simply did not deserve.

It should be noted that Marx wrote a “critique of political economy”, and on no account a “theory of economics”; and most certainly did not attempt a theory of law. Indeed, in 1843-4 he wrote his Critique of Hegel’s Philosophy of Right, which acknowledges the power of the young Hegel’s critique of capitalist relations (Lukács), while showing how Hegel could not arrive at a materialist diagnosis or recognition of the class struggle.

Igor demonstrates a splendid knowledge of the Grundrisse, Capital, and many other texts by Marx and Engels, and their critics. But there is one important text which does not appear in his book, surprisingly. In 1887, a few years after Marx’s death, Engels and Karl Kautsky published their article Juristen-Socialismus, translated into English and published as “Juridical Socialism” (Engels and Kautsky 1977, see also Beirne 1977). Engels explained – and Marx would not have disagreed – how the main battle cry of the bourgeoisie became “equality before the law”, because their struggle had to be based around legalistic demands. “This solidified a world view based on legal rights … at first the proletariat had embraced the world view of legal rights, and sought weapons in it for use against the bourgeoisie.” Engels and Kautsky insisted that “Marx … presents no legalistic demands at all in his theoretical work … Legal rights, which always reflect the economic conditions of a specific society, are treated only in a very secondary manner in Marx’s theoretical studies, as opposed to the primary historical topic of situating particular circumstances, means of acquisition, and social classes in specific periods.” But they also insisted that socialists would not fail to present certain legalistic demands: “Every struggling class must therefore formulate its demands as legalistic demands within a program … however, no existing socialist party has thought of making a new legal philosophy of its program, and this will not happen in the future.” For example, the workers’ struggle for the ten hour day, which occupies a significant part of Capital.

This position was paraphrased by Peter Schöttler in 1993 as follows: “… there is indeed no proletarian or socialist legal ideology (just as there can be no socialist philosophy of law), but there are proletarian, or socialist, legal demands, and these are necessary, nay indispensable, if the proletariat wishes to articulate its interests politically in opposition to the bourgeoisie and the bourgeois state. The political class struggle includes making legal demands.” In fact, Engels and Kautsky – and Marx – provided the strongest support for Igor’s position.

Chapter 4 is entitled “The Normative Argument for Communist Legality”. Again, the title is perhaps misleading, since this chapter contains to my mind the best critique – indeed demolition – of the “commodity exchange theory of law”, better known as the Commodity Form Theory or CFT, of Evgeny Pashukanis.

Contemporary “Pashukanists” include China Miéville, Robert Knox, and Grietje Baars (see my 2020 review in Marx & Philosophy Review of Books of her monumental The Corporation, Law, and Capitalism, a thoroughly Pashukanist work).

Pashukanis worked out the most rigorous and interesting attempt at a Marxist theory of law, his General Theory of Law and Marxism, in 1920-21 in Berlin while employed as the legal adviser to the Soviet Russian delegation negotiating the Rapallo Treaty with Germany. He wrote it in 1923. The General Theory was published in Russia in 1924. Of course, 1921 was the year in which Lenin introduced the New Economic Policy, described by him as an “economic system that would include ‘a free market and capitalism, both subject to state control,’ while socialized state enterprises would operate on ‘a profit basis’.” After Lenin’s death, Stalin changed course dramatically in his “great break” of 1928.

As Igor notes, “Although Pashukanis grants that recourse to law will still be necessary during the transition from capitalism to communism, he leaves no doubt about the withering away of law in developed communist society.” (103) That conclusion follows inevitably from Pashukanis’s commodity form theory of law – law, for him, is achieved under developed capitalism. Law will be replaced by administration. As Igor shows (107), Pashukanis’s most significant departure from Marx was his derivation of legal relations from commodity exchange relations.

Igor demonstrates (106) that the shortcomings of Pashukanis’s theory can be summed up on four levels. First, Pashukanis conflates three distinct concepts – positive law, legal validity and juridical personhood, under the unitary umbrella of the legal form. Second, he derives all legal phenomena from generalised commodity exchange relations, which forces him to confine his analysis to private law, and property law in particular. Third, he cannot make sense of public law, so that for him democratic planning takes the form of a purely technical process. And fourth, he contradicts Marx’s central claim that “legal relations stem from historically specific productive relations”.

The New Economic Policy demanded courts and a Civil Code – in essence the German Civil Code enacted in Russia in the mid 19th century. After Stalin’s turn to full state control, centralised planning, and forcibly collectivised agriculture, Pashukanis was forced to retract his theory, and to acknowledge, with Pyotr Stuchka, that there was indeed a new “socialist law” in the USSR. Engels had, as noted above, stated categorically that there could be no such thing. Pashukanis, having played a leading role in drafting the “Stalin Constitution” of 1936 with its chapter on human rights, was denounced as an enemy of the people, sentenced to death, and shot in September 1937. He was posthumously rehabilitated in 1956, after Stalin’s death.

Throughout his book Igor insists that “rather than envisioning the transcending of rights under post-capitalist conditions or material abundance and solidarity, Marx’s dialectical approach pointed to the transformation of civil and political rights on the basis of a communist mode of production that would aim at meeting the multiplicity of human needs. This position goes against conventional liberal and Marxist interpretations, according to which Marx was hostile to individual rights and predicted their obsolescence in the communist society of the future.” (208)

Marx’s new materialist conception of right leads to the conclusion that communist production would require legal relations of its own. Scott Newton (2016) that the USSR suffered from an over-abundance of law and legal regulation which could hardly be described as socialist. I entirely agree, and Igor provides ample textual support for this argument.

However, there is one point at which I do not agree. Igor mobilises Engels’ 1845 Speeches at Elberfeld in support of the proposition that although Engels was convinced that communist society would eliminate the root causes of crime and property disputes, he acknowledged that individual conflicts could still arise and would demand resolution by arbitrators (122). That is placing too much weight on Engels’s passing remark, I think. Igor is quite right to add that “Marx did not detail the future `laws’ of communist society; this task was left for the associated producers themselves.” (124)

Lastly, I turn to Marx’s scorn for the British Liberals (or Whigs). In his 1852 “The Elections in England. –Tories and Whigs” Marx wrote in his usual pithy and satirical manner: “It is evident what a distastefully heterogeneous mixture the character of the British Whigs must turn out to be: Feudalists, who are at the same time Malthusians, money-mongers with feudal prejudices, aristocrats without point of honor, Bourgeois without industrial activity, finally — men with progressive phrases, progressists with fanatical Conservatism, traffickers in homeopathical fractions of reforms, fosterers of family — nepotism, Grand Masters of corruption, hypocrites of religion, Tartuffes of politics.” One might think that this is not a bad description of the Liberal Democrats of today, especially in their coalition with the Tories under David Cameron and Nick Clegg.