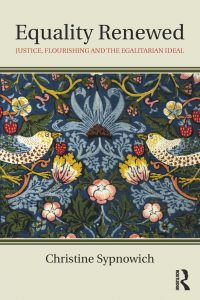 Özer Barış Tunçel is a PhD candidate at Istanbul Technical University. He is currently writing …

As Christine Sypnowich states, the ideal of equality has had a great impact in political movements, public policy and philosophical debate in twentieth century, and yet things haven’t gone well for the ideal; egalitarian principles have been challenged from inside and outside of the egalitarian milieu, the postwar welfare state has withered away, and ‘the gap between people from rich and poor countries has grown, while within affluent countries there is a widening gap between the haves and have-nots’ (2). So, what went wrong? Sypnowich argues that criticism from within the egalitarian framework, and ‘the neutralism of liberal political thought’ (4) has disoriented theorizing about the ideal of equality.

Equality Renewed, in this regard, offers a project that aims at both the ‘retrieval and innovation’ (4) of the ideal of equality through a distinctive currency of egalitarian justice: flourishing. Themes from Marx, in this regard, hold a significant place in Sypnwich’s theory and we see them occur again and again in different topics from racism to gender, the good life, material equality, commonality and so forth. The first two parts of the book are dedicated to tackling the problem of difference – along with race and sex, the two issues that ‘challenge the commonality inherent in equality’ (32) – and neutralism and multiculturalism as responses to it. As for the third and last part of the book, Sypnowich here explicates her flourishing approach to equality, through evaluations, comparisons and refutations of the challenges that come from different camps in contemporary political philosophy. In doing so, she covers a lot of ground and touches upon a wide variety of thinkers and topics.

In chapter 1, Sypnowich addresses the problem of difference in egalitarian political philosophy, and claims that there is an undeniable tension between difference and equality as a political ideal. Even with egalitiarian motivations, the politics of difference ‘threatens to undermine the idea of membership in a common project’, and this commonality is the ‘precondition of any effort to remedy inequality among persons’ (25). Thus, ‘social justice is not best pursued by the politics of difference or identity’ (16). Since ‘the purpose of cultural accommodation is to enable the full participation and flourishing of all citizens’ (31), we should ‘focus on the interests that accrue from different identities and the extent to which they point to inequalities that require political redress’ (Ibid), to enable equal flourishing for all.

Chapters 2 and 3 continue in this vein and discuss race and gender respectively. With regards to race, Sypnowich claims that through unjust treatment, racism diminishes the quality of life of the oppressed, and by causing a range of ‘social ills’, it diminishes the quality of life for all (43). However, what needs to be done is not to be colour conscious in a way which might turn into ‘reverse discrimination’ and ‘burden the apparent beneficiary’ with arbitrary benefits (41). We should rather be ‘provisionally colour conscious’ to make ‘those hitherto barred from flourishing to have the opportunity to fulfil their potential’ while staying within a theory which is based on ‘the idea of commonality’ and using flourishing as a common measure (49). As for gender, Sypnowich claims that ‘sexual equality should abandon the attempt to ascertain the nature of sexual or gender identity’ (61). For sexual equality, instead of trying to settle the nature of gender, we should broaden ‘the scope of possible pursuits, for both sexes, and finding the means to make that possible’ (Ibid).

Chapters 4 and 5 tackle liberal neutralism and muliticulralism respectively. Sypnowich argues that Rawls’ neutralist response to difference and pluralism about the good render theories like his vulnerable, for even the values he endorses such as reason, impartiality and cooperation need justification ‘by reference to a substantive conception of the good’ (71). Thus, the concept of neutrality is ‘dubious’, and is accompanied by a concept of ‘neutered, unreal person and a sphere beyond value’ (83), based on an ‘artificial segregation of politics from comprehensive moral views about how we are to live’ (82). To remedy this problem, Sypnowich argues that ‘we can take the leap and commit to a conception of human flourishing’ (84). The problem of liberal multiculturalism, on the other hand, is that it lacks a ‘normative assessment’ (91) of the minority cultures it aims to preserve. If we take the flourishing approach, then different cultures would be preserved only if they foster their members’ ‘self-determination and capacity to live well’ (104). If they fail to do so, then state intervention and programmes of cultural reforms are justified (99).

In chapter 6 Sypnowich defends material equality from the point of flourishing against the libertarian challenges of the levelling down objection, the role of talent, and partiality (113). She argues that material inequalities ‘tend to snowball’ and are ‘cancerou’” (117) as they almost always result in unequal wellbeing, thus need to be eliminated in order to achieve equal flourishing. Taking this point further by evoking Marx’s idea that the free development of each is a condition for the free develpment of all, Sypnowich claims that ‘human flourishing can be hampered by inequality, no matter where one is in the economic hierarchy’. Even if one is rich in a society where others are destitute, one still does not have ‘a high quality of life’ (126).

Sypnowich finally presents her case for equality of flourishing and its components in chapter 7. She claims that ‘the answer to the question “equality of what?” is flourishing’ (132), for the distribution of ‘resources, goods or income is, after all, merely instrumental to the fundamental goal of living well’ (7). Flourishing, according to Sypnowich has three constituents, namely: ‘the ability to choose […] how to live’, ‘objectively worthwhile pursuits’, and ‘personal contentment’ (140). With regard to equality of flourishing, Sypnowich claims that due to several factors, like one’s character, ‘some inevitable shortfalls in flourishing’ (143) has to be accepted. But if equal flourishing is not possible, this seems to cause a problem for equality of flourishing as an ideal, since she herself claims that ‘equal human wellbeing’ is the proper aim (122) of her project. Her solution to this predicament is to adopt a ‘staggered threshold strategy’ where ‘we must first focus on equal achievement of flourishing at a low threshold, then moving on to raise individuals to a higher threshold, and then higher’, so that ‘even those who are disadvantaged in talent and ability have an adequate level of flourishing’ (145). However, she also states that ‘unequal allocation of resources and unequal flourishing’ is permitted ‘so long as the threshold is met’ (144). At this point, Sypnowich’s ‘a lack of interest in equality above the level of sufficiency’ and ‘a lack of interest in perfection below sufficiency’ (146) strategy obscures the egalitarian motivations of her project.

In chapter 8, Sypnowich tackles the the worry that perfectionism may licence the illiberal coercion of people’s choices. Sypnowich does not shy away from perfectionism, claiming that to enable people to flourish, ‘society […] should seek to provide favourable conditions for choice’ (156) as autonomy can be diminished by bad choices (159). While she acknowledges that ‘coercion is at odds with both flourishing and equality’ (157), she argues that ‘incentives and social institutions that promote the valuable can be permissible’ (159), as long as they are discussed ‘properly in the domain of democratic debate in light of the particulars of the case’ (170).

In chapter 9, Sypnowich associates her ideal of equal flourishing with the concept of the public good, arguing that it is ‘a precondition for the promotion of individuals’ greater and more equal flourishing’ (181). The public good, on the egalitarian flourishing account, ‘refers to a common commitment to the background conditions for human flourishing which feature in the public domain’ (182), and ‘has an equalising effect because it involves an emphasis on participation in public institutions’ (183). Finally in chapter 10, Sypnowich dwells on the question of cosmopolitanism and global justice, arguing that we have ‘cosmopolitan duties’ (196) to promote flourishing.

Throughout the book, Sypnowich engages with various debates within contemporary political philosophy in a highly critical and detailed manner. In evaluating the debates in contemporary egalitarian political philosophy, Sypnowich manages to show that the answer to the ‘equality of what’ question needs to be multidimensional, contrary to the claims of luck egalitarians who are ‘mired in odd debates and concerns’ (221) in trying to defend material equality, or relational egalitarians who are preoccupied with ‘citizenship and the regard of others, to the neglect of economic inequality’ (141). Her engagement with the problems of race, sex and culture from a commonality perspective is quite illuminating, and her remarks on the impracticability of liberal neutralism towards the good is a powerful claim about the contradictory nature of contemporary liberal political philosophy, for as she strongly puts it: ‘the liberal is not neutral about the reasons for being neutral’ (80).

Nevertheless, there is an important shortcoming when it comes explicating the framework of the constituents of flourishing, which is a crucial element of Sypnowich’s project as a whole. As mentioned above, Sypnowich argues that the ability to choose, objectively worthwhile pursuits, and personal contentment constitute flourishing. She, however, does not specify how much weight each one of these components has in the assessment of one’s level of flourishing or how they interact with one another. Sypnowich only states that ‘there will be tradeoffs’ and that one could not be counted as flourishing if ‘any one component is too lacking’ (141), leaving the framework rather unclear. As she argues that ‘a theory of equality should focus on the quality of people’s lives’ and that ‘flourishing is both a subjective and objective measure’ (171) in accordance with this purpose, it would have been more efficacious if she would have discussed its structure in a more detailed manner.

All in all, Equality Renewed is an extensive and illuminating work of political philosophy which draws sources from a vast range of thinkers from Aristotle to Marx, Morris, Rawls, Dworkin and many more. This diversity enriches Sypnowich’s project and arguments while making her work engaging for a wide audience, and is a distinctive feature of the book. She manages to establish flourishing as a distinctive position within the liberal egalitarian framework, and opens up a new chapter for the debates on equality and justice.