Marx & Philosophy Review of BooksReviews‘Unlearning Marx: Why Soviet Failure was a Triumph for Marx’ by Steve Paxton reviewed by Mark Cowling 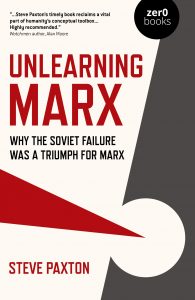 Steve Paxton
Unlearning Marx: Why Soviet Failure was a Triumph for Marx

Mark Cowling was a Professor of Criminology and Marxism at Teesside University. He is the editor of …

Unlearning Marx is an interesting but uneven book. Its basic claim is that the Soviet Union offered a way of modernising the czarist empire and preparing it for the arrival of capitalism, which arose with the collapse of the Soviet system. Plainly this is a massive undertaking, particularly in a mere 184 pages. Not surprisingly then, some aspects are dealt with more thoroughly than others.

Unlearning Marx is partly a matter of reading Marx whilst forgetting what Lenin, Trotsky and Stalin had to say. Paxton also wants to get away from the idea that the failure of the Soviet Union and various other attempts to create socialism show that it can never work (3). Some of these, such as Kampuchea under the Khmer Rouge, can be disowned fairly easily (6). Very many regimes of what was ‘actually existing socialism’ were derived from and similar to the USSR (7). The Soviet period prior to the rise of Stalin was initially marked by a desperate attempt to retain state power (8). But the basic problem in the former czarist empire, says Paxton, was that capitalism had not sufficiently developed the productive forces (9). Despite this, there was some basis in Marx’s preface to the second Russian edition of The Communist Manifesto that the Russian peasant commune could pass directly into the higher form of communist common ownership, provided that a Russian revolution became the signal for revolution in the West, a position to which Lenin and Trotsky were committed. The failure of revolutions in the West meant that the Soviet experiment could not, according to Marx, deliver a viable socialist society; and in this sense Marx’s work is vindicated by the Soviet failure to achieve socialism (11-12).

Paxton goes on to give an account of historical materialism which follows that of Cohen in Karl Marx’s Theory of History – A Defence (Cohen 2000). This gives a rigorous defence of technological determinism. Specifically, historical change is driven by technological development, and economic structures arise and persist because they promote technological development; when they cease to do so, they are liable to be overthrown. Paxton accepts the view that capitalism developed in England on the foundation of increased productivity on the land (20).

Some critical observations: the Mensheviks, Kautsky and Rosa Luxemburg all pointed out that the Bolshevik coup was fundamentally undemocratic, in that the Bolsheviks were very well short of an electoral majority. Any viable government in Russia would have been socialist, but one with a better electoral base would have secured better legitimacy. Also, although Cohen’s account of historical materialism is very well argued, a whole variety of other possibilities also have some foundation. These include: relations of production determinism; economic determinism; scepticism – in other words a variety of possibilities all work some of the time; a view of society as an organism.

Paxton makes two more contentious claims, namely that capitalism did not exist in Russia in 1917, and that the preconditions for it were not present. Thus, without intending to do so, the Soviet regime facilitated the transition from feudalism to capitalism (22). Even by 1917, capitalist production relations had penetrated the lives of no more than 10% of Russian peasants and workers; agriculture was very inefficient, and there was little effective industry (23-4). The Stalin period expropriated the peasantry and concentrated some of them into large-scale farms by extremely harsh measures, resembling those practised in the West much earlier, while others became industrial workers in the newly-developed large-scale industries, thus providing the foundations for capitalism, the actual transition occurring from 1989 onwards (26-8).

Paxton moves on to a discussion of the way in which Marx defines class, and how this can be applied in various circumstances. In general, he follows accurately the approach taken by Cohen, but he extends this, by, for example, arguing that people working within the gig economy are basically proletarians despite enjoying ‘the illusion of ownership’ (39). He then moves on to consider intermediate class locations occupied by people such as technocrats, using analysis from Cohen, Elster, Roemer and Hodges.

In the next section Paxton considers feudal relationships, starting with England. In broad terms he sees serfs as lacking the full ownership of their labour-power, unlike proletarians. Serfs are subject to coercion by the feudal lord, which is the means by which surplus is extracted from them (51). Although pre-capitalist modes of production engage in some production for exchange, they are mainly concerned with use-value. They are definitely not aimed at the continuous expansion of exchange value characterised by capitalism (53).

He then moves on to the definition of feudalism, basing himself on Cohen, and he also mentions Paul Sweezy, Maurice Dobb, and Eric Hobsbawm. The interesting issue is, obviously, the question of how and to what extent capitalism had developed in the Russian countryside. It is very strange that he does not discuss Lenin’s The Development of Capitalism in Russia (Lenin 1970). In this volume Lenin looks at numerous statistics gathered by the Zemstvos, and claims that capitalism has developed to a considerable extent, and that therefore the Narodnik idea of founding communism on the Mir, or village community, simply will not work. Clearly, Paxton thinks that Lenin is mistaken, but he surely needs to argue the case. And where the development of capitalism from feudalism in England is concerned, it is also strange that he does not mention Brennan and his ideas (Aston and Philpin 1976), widely regarded as a classic.

Considerable space is then devoted to Cohen’s account of modes of production and of social structure, and of Rigby’s criticisms of Cohen. Need, he asserts, is a relative concept, and there can be periods of stagnation which can last for centuries. The eventual conclusion is that revolution is to be viewed as a process rather than as a moment – presumably in the Hegelian sense of the word (53-64). Paxton then defends Cohen’s account of functional explanation (64-70).

Paxton then moves on to discussing Russian agriculture in czarist times. A quick search of a university library catalogue produces about 130 books and around 4,900 articles on this subject. This leaves Paxton’s discussion looking rather thinly researched. However, on the basis of his analysis he concludes that the extent of proletarianization on the land was insignificant (86). There were lengthy debates between Lenin, Mensheviks and the Socialist Revolutionaries on the land question, and it is surprising that Paxton does not mention these. After quite a lengthy discussion Paxton concludes that agricultural wage labour was little developed by 1917, amounting to most 1.42% of the population (94). Industrial and rural wage labour amounted to, at the most generous estimate, 8.9% of the population (96).

When it comes to the bourgeoisie, Paxton shares the view of many other commentators that the Russian bourgeoisie was weak, and heavily dependent upon the state, on the one hand, and foreign finance on the other. His overall conclusion is that capitalism was little developed by the time of the revolution (100-1).

Paxton notes that the land was nationalised immediately after the revolution. The Bolsheviks adopted the policy of the Socialist Revolutionaries, who represented the peasants; they could not in fact do anything different (106). He rightly describes War Communism as a system designed to ensure the survival of the regime. He then follows the standard view of the New Economic Policy (NEP) as a temporary retreat to encourage the growth of capitalism and increased productivity on the land. However, the vast majority of peasants remained middle peasants: kulaks and agricultural labourers were a small minority (107-17). He accurately presents the dilemma which led to the end of the NEP: relying on the kulaks to raise agricultural productivity would be slow, but would conciliate the peasants; collectivisation would antagonise the peasants generally, but would facilitate modern agricultural methods (125). Paxton deems collectivisation a success: agricultural productivity in Russia in 1913 was below the level of England in 1600; by 1939 it was at the level of England in the mid nineteenth century (129). Paxton moves swiftly on to Soviet victory in the Second World War, de-Stalinisation, and the end of the Soviet Union. He does not identify precisely why the Soviet system collapsed. For this we should look at its failure to produce good consumer goods, and its failure to embrace computerisation, which requires a greater degree of political freedom (cf. Castells 2000; Cowling 2014).

Paxton tries to deal with a massive subject in a short book. Not surprisingly, he does not get to grips with the massive literature on Russian agriculture. He particularly fails to really discuss Lenin’s views about the development of capitalism on the land, and should perhaps have reduced his discussion of Cohen in order to spend more time on land reform. Paxton’s idea that the Soviet period achieved a transition from feudalism to capitalism is interesting, but really requires a much longer book in order to give it a proper airing.