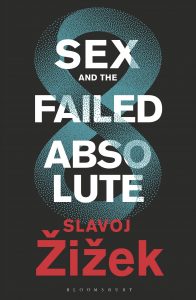 Slavoj Žižek’s Sex and the Failed Absolute has been marketed as ‘the most rigorous articulation of his philosophical system to date’, a book which aims at nothing less – to quote the dust-jacket itself – than ‘a new definition of dialectical materialism.’ This ‘new definition’, is, for all that, not unfamiliar to Žižek’s readers, drawing on Hegel, Lacan and Marx to posit reality as the product of a constitutive failure or incompleteness, a dynamic incommensurability with which the ‘impossibility’ of sexuality is perhaps our closest point of contact. Indeed the aforementioned thinkers weave their way through a familiar ecology of pop-culture references, jokes and topical issues in cultural criticism, with significant content ‘shamelessly paraphrased from Wikipedia’ (181, 198, 270), and some passages picked up quite directly from Žižek’s other works. In this sense, we may well be justified in substituting, for the adjectives ‘rigorous’ and ‘new’, the more appropriate descriptors ‘humorous’ and ‘provocative’ – a substitution I by no means intend disparagingly.

The book’s overarching thesis is that dialectical materialism must be properly understood as the functioning of a constitutive impossibility at the metaphysical heart of ‘things’, an unorientable ‘gap’ or ‘incompleteness’ which serves as the paradoxical condition for their auto-production. Žižek’s recurrent model for this ontological impossibility is the topology of the Möbius strip, a three-dimensional object with one surface, which is, geometrically speaking, ‘unorientable’, and as such the location of a fundamental indeterminacy which calls for a representational choice. As Žižek explains in the book’s introduction:

The form of immanent contradiction captured by the Möbius strip, alongside other unorientable surfaces – the cross-cap and the Klein bottle – is thus marbled throughout the book, which is itself structured around four key ‘theorems’, each of which explores a philosophical instance of this contradictory figure. These theorems, in turn, are each augmented by a corollary and several scholia, providing ‘explanatory comments which apply the basic thesis to a singular (and sometimes contingent) topic’ (8).

The first such theorem sees Žižek return to his arguments in The Parallax View (2006), according to which reality itself is constituted in the perceptual disconnect between its realist and transcendental dimensions. Here, in the strongest of the book’s chapters, Žižek channels Kant, in particular the Kantian antinomies of reason – those contradictions which, for the latter, emerge when we finite beings attempt to conceive of transcendent reality. Famously, for Kant, noumenal ‘things-in-themselves’ are fundamentally unknowable, given that they must always be mediated through our subjective representations. Thus, to take a well-known example, our reason encounters an irresolvable tension between the deterministic causation of the laws of nature, and the absolute spontaneity required in order for subjective freedom to adhere.

For Kant, these antinomies indicate the fundamental limits of our knowledge of the transcendent Absolute. For Žižek, however, in a characteristically Hegelian manoeuvre, these limits or impossibilities are commensurate with the nature of the Absolute itself, as he explains:

In other words, the very nature of reality’s ‘completeness’ is its inability to ever fully totalise or be complete. The Absolute can only ever be thought – indeed must only ever be thought, if it is to allow for such ethico-political possibilities as freedom or revolution – as ‘failed’, the subject of a constant revision.

Žižek’s second theorem extends this model into the terrain of Lacanian psychoanalysis, and the notion of sexuality itself as the site of a fundamental lack or incompleteness – a result of the constitutive castration which will enable Lacan to claim that il n’y a pas de rapport sexuel [there is no sexual relation]. The purport of this skirmish with sexuality is perhaps already evident. If sex constitutes our most immediate and dramatic experience of impossibility and incompleteness (the impossibility of ever realising a desire structured as lack) it is therefore, according to Žižek’s theoretical universe, our ‘brush with the absolute’ (107), that sublime moment at which all established orders are called into question and at which we become aware of the radically dialectical (or impossible) character of reality.

Theorem III pushes further into the realm of political ontology, where, through a series of examples – the strangely a-political politics of fascism, the interchangeable hierarchy of Church and State, the proliferation of sexual identities ‘derived’ from a dominant masculinity – we encounter a Hegelian metaphysics of immanent contradiction, of objects which ‘ex-ist […] out of their own impossibility’ (219). Theorem IV, meanwhile, links this ontological incompleteness to the necessary persistence of abstraction, not as a feature of human thought, ‘but the most basic feature of reality itself whose organic unity is always and by definition ruined’ (343). If reality is, in other words, never fully contiguous or complete, our attempts to think it must always encounter abstraction conceived in Hegelian terms, as ‘the excess of abstract negativity which cannot be sublated into a concrete totality’ (345) – a fact which results in the persistence of certain forms of abstraction in even the most ‘immanent’ or ‘materialist’ of philosophical schemas (Deleuze, Butler).

Central again, here, is Lacan, and his notion of the ‘barred subject’ – a subject which is symbolically ‘thwarted’ or ‘castrated’, in such a way as abstracts it from any ‘flat’ ontology of things. As Žižek explains:

The bar simply means that subject is not an object. In this sense, the bar is constitutive of subjectivity, it is Lacan’s name for what Freud called Ur-Verdraengung, the primordial repression, not the repression into-the-unconscious of any determinate content but the opening-up of the void which can then be filled in by repressed content. To put it succinctly, the (future) subject is interpellated, the interpellation fails, and subject is the outcome of this failure (370).

Thus we come full circle, with the ‘failed’ antinomies of reason reflecting a fundamental incompleteness of reality itself, and a symbolically barred or castrated subject as the most immediately accessible instance of this more general metaphysical failure. The gradual elaboration of this thesis, as I have said, is rich and entertaining, and (as is always the case with Žižek’s best work) offers exciting and accessible inroads to some very difficult thinkers. Given, however, the book’s self-identification as a major metaphysical treatise, some comment is required as to the status of its philosophical claims, some of which remain unconvincing.

Indeed there is a great danger against which no book is safe – particularly when it aspires to observations of a certain ‘universality’ – that of being read alongside something more convincing. And unfortunately for Žižek, I found myself reading, alongside his work, a book which effortlessly attained the kind of ‘universalism’ to which Žižek’s system aspires – Tyson Yunkaporta’s Sand Talk: How Indigenous Thinking Can Save the World. Without lapsing into a lengthy discussion of the latter here, it suffices to say that Apalech man Yunkaporta’s nuanced and sophisticated advocacy for a subjectivity in profound equilibrium with its ecology, of a humanity which is absolutely contiguous with animal, vegetal and cosmic patterns, and of a reality which is conceived as fundamentally adequate or ‘complete’, immediately suggested some of the Eurocentric presuppositions which Žižek inherits from Hegel’s essentially teleological thought. It appears, indeed, to have eluded Žižek that unqualified narratives around the incompleteness or imperfection of reality have long tended to be symbiotic with a telos of expansionism and ‘progress’ which threatens the very future of life on this planet.

This is not to naively valorise ‘other’ cultures as possessors of some simple, esoteric knowledge more adequate than that of the ‘Western tradition’. The critique of Žižek is a much more pointed one – his metaphysics is flawed in the terms of this tradition itself. We need look no further than that quintessentially Enlightenment figure, Benedict de Spinoza, for whom the superstitious fabrication of a two-world metaphysics could only be overcome by a radical immanence commensurate with the proposition, ‘by reality and perfection I understand the same thing.’ The radicality of this position – according to which none of life’s superabundant potentialities for differentiation or individuation can be denied by reactionary exercises of political power – is utterly commensurate with a revolutionary ‘materialism’ which might be worthy of the name. Indeed an alternate tendency in Western metaphysical thought, threading its way through Spinoza, Nietzsche, Bergson and Deleuze, which rejects as dangerous nihilism any ‘denial’ or denigration of life, is perfectly compatible with an ontology like that described by Yunkaporta, according to which ‘reality’ or ‘nature’, far from incomplete or fundamentally imbalanced, is characterised by immensely sophisticated systems of equilibrium – such as may well see that recent European invention, ‘homo economicus’, shortly expunged from the Earth.

To rehash, indeed, an old (Deleuzo-Guattarian) critique of Freud, the presupposition that desire is constructed around a fundamental incompleteness or ‘lack’ – alongside that of the subject as constituted through a triangular Oedipal structure – may well hold for the bourgeoisie of nineteenth century Vienna. It encounters difficulties, however, in attempting to account for the plurality of human life in general, much less the metaphysical structure of reality itself. Here, indeed, it may well replicate a familiar history of intellectual imperialism, which would extend the neuroses of capitalist subjectivity to every corner of the real. This is not to reject universalism in favour of some kind of hopelessly pluralist or status quo ‘postmodernity’, but rather to defend the possibility of a genuine universality, so concrete as to find its expression in the utmost diversity of human cultures. Žižek’s ‘new materialism’, to my mind, falls short of this essentially political task.