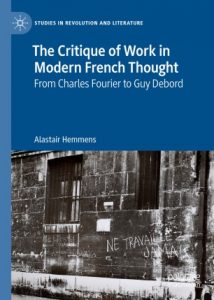 Alastair Hemmens
The Critique of Work in Modern French Thought: From Charles Fourier to Guy Debord

Under capitalism, life is work and work is life. To imagine a world beyond it is sheer blasphemy. Yet, a growing number of titles over the past decade have begun to do just that. They have promised, at the very least, a more critical analysis of work. Capitalism, they say, is in an intractable crisis: the crisis of work. The goal now is not simply the liberation of labour but, rather, the liberation from labour. Among these titles, we can now include Alastair Hemmens’ The Critique of Work in Modern French Thought: From Charles Fourier to Guy Debord. Hemmens differs in many respects from other recent critiques of work. He avoids techno-utopian speculation and in the few moments universal basic income is mentioned, it is given short shrift. Furthermore, the tradition of French anti-work theory he surveys – Fourier, Lafargue, Breton and Debord – has, in large part, been neglected or only superficially referenced within contemporary critiques of work (4). Whilst Hemmens provides an insightful and often unique approach to his analysis of French anti-work theory, he is concerned primarily with one single problem: how might we take the critique of work literally? (14).

Hemmens finds the resources for such a critique in the Marxian tradition of Wertkritik and the ‘critique of value’ school ‘associated with the German-language journals Krisis and Exit!’ (Ibid). As such, this book serves as a useful introduction to a tradition that remains relatively obscure to English readers. Drawing on the work of critical theorist Robert Kurz, the central philosophical claim of the book is ‘that there are really only two possible ways of understanding and approaching the critique of work’ (6). Hemmens dubs one approach the ‘phenomenological mode of analysis’ (Ibid) and the other as the ‘categorical critique of work’ (194). The former, following Kurz’s distinction, is indebted to the ‘exoteric’ reading of Marx and the latter to the ‘esoteric’ reading. The clear advantage of this distinction is that it does not search in vain for a ‘true’ Marx who just so happens to lend legitimacy to one’s own position, instead arguing that aspects of ‘both approaches can be found’ (6) within his work. A potential disadvantage, nevertheless, is that through installing this opposition one risks foreclosing thinking through Marx’s apparent contradictions.

In the ‘exoteric’ side of his work, Marx is said to be the ‘political economist par excellence’ who adopts a ‘progressivist and positivistic conception of labour and the development of productive forces from bourgeois idealism’ (9). I will not go into a detailed dispute here on whether this really is an accurate description of any side of Marx’s work. Suffice to say, the sense in which Marx acted as the ‘political economist par excellence’ is extremely dubious to me. Nevertheless, ‘exoteric’ Marxism – understood more broadly as a tradition in which ‘Marx is believed to have ‘corrected’ political economy by revealing the ‘theft’ of the full value of the workers’ labour that is carried out by the capitalist class’ (13) – is certainly a useful description of long-standing misinterpretations. As Hemmens rightly argues, such a description wrongfully envisages capitalism ‘to be primarily a system of personal domination’ (Ibid). Hemmens contends that ‘exoteric’ Marxism results in a phenomenological critique of work which proceeds on the basis of ‘an empirical, historical, ethical and moral critical analysis’ (6). Work as such is assumed to be unproblematic but ‘might become so under certain conditions’ (Ibid). Because an implicitly positivistic analysis begins from a critique of empirically perceived objects, ‘“work” per se could never be the object of critique, only specific phenomena that fall under its rubric’ (7).

For the literal critique of work, Hemmens turns to ‘esoteric’ Marxism, and the ‘critique of value’, in order to demonstrate the superiority of a categorical critique of work. As Hemmens puts it, labour is ‘not a neutral fact of all social life […] rather it is a historically specific social form that establishes the grounds for an impersonal, subjectless, and abstract domination that gives a historical “directionally dynamic” character to phenomenological reality’ (16). Work as a general category for all ‘abstract expenditure of human energy’ (194) is only understandable, Hemmens argues, from within societies held under the sway of the value-form. From the perspective of a categorical critique of work, the phenomenological analysis is limited insomuch as it cannot contend with work and labour as real abstraction. Similarly, Hemmens argues, it is beset with the ‘philosophical baggage’ (7) of much modern thought. The dizzying array of baggage here includes but is not limited to: positivism and empiricism, enlightenment theories of the subject, Cartesian dualism, the proletariat as capitalism’s gravediggers, ‘homo-faber’ as human nature, and Marx’s concept of ‘species-being’. Having foregrounded this distinction between two differing possible critiques of work, Hemmens deploys it as means to assess the contemporary relevance of the French anti-work theorists. As he states clearly, they are relevant today because ‘they contain, to a greater or lesser degree, elements of a ‘categorical’ critique of labour’ (33). It is a cruel irony that the work of these French thinkers remains relevant only insomuch as it lives up to the work of a German critical theorist, i.e. Robert Kurz. This is not a criticism, we can agree that this is almost always the way one should assess French philosophy. Perhaps this reviewer differs on which German we should choose.

Throughout his readings of Fourier, Lafargue, Breton and Debord, Hemmens gives a clear and accessible account of the importance of their anti-work sentiments to their overall projects. He sheds new light on the centrality of this aspect of their work and in so doing provides a compelling re-assessment of their respective projects. Fourier is given due credit for his influence on the tradition of anti-work French thought, with Breton having been a ‘great reader’ of his (107). Furthermore, Hemmens does not rehearse the now well-worn Marxist criticisms of Fourier as too ‘unscientific’, ‘utopian’, etc. (72). Rather, he attempts to demonstrate how Fourier’s critiques of work, which views modern work as ‘intrinsically at odds with human being and […] an affront to the very order of the universe’ (47), are undermined by his commitment that any utopian society would aim ‘to realise the most rational and utilitarian expenditure of the energy contained in the social body’ (71). A further critique made, in which the influence of Moishe Postone is evident, notes how Fourier ‘is one of the forerunners of modern Antisemitism’ (65). Hemmens points to Fourier’s uncritical embrace of ‘the idea of the separation of society into “productive” and “unproductive” persons’ (65) and his analysis of how this contributes to Antisemitic discourse is a timely intervention at a moment when the rise of a far-right politics of resentment coincides with the ‘crisis of work’. Of all the theorists assessed, there is no doubt that Fourier, though an important interlocutor for his successors, contributes the least to a critique of the category of labour as such (47).

Lafargue, Breton and Debord are seen to be somewhat more successful in their contributions to a categorical critique. Though, at times, they too are let down, in Hemmens’ opinion, by an uncritical reification of capitalism’s ‘social ontology of labour’ (14). Hemmens, nonetheless, highlights the aspects of their work which could prove fruitful for contemporary critiques of work. Lafargue’s position that ‘“work”, and not “God”,’ is the ‘true object of worship in contemporary society’ (86), is a powerful rejoinder to those who see capitalism as a purely secular force. Elsewhere, Debord’s characterisation of the spectacle as ‘nothing other than the economy developing itself for itself’ (145) chimes with the ‘critique of value’ and the acknowledgement that under the domination of the value-form ‘an impersonal, abstract and quantitative social form organises society and not the human beings themselves’ (144). So far, so good. It is in Hemmens’ treatment of Breton and the surrealists, however, where the philosophical shortcomings are most evident. To be clear, this is not to say that Hemmens does a bad job of detailing Breton’s anti-work commitments. It is Hemmens’ seduction by surrealist fantasies with which we might take issue. In my view, this is what constitutes the fundamental shortcoming of the whole book.

Hemmens shares the surrealist desire to overcome both the ‘vision of mankind as homo faber’ and the ‘very distinction between subject and object’ (131). To paraphrase André Gorz, farewell to the species-being! When Hemmens does criticise Breton – this is characteristic of his criticism of Fourier, Lafargue, Debord and Marx too – it is on the basis that he ‘accepts the notion that labour is a material necessity’ (119). Hemmens argues that this refers to a ‘broad, and meaningless, definition of labour as the fact that people have to feed, clothe and shelter themselves’ (Ibid). Underlying Hemmens’ anti-positivist critique of labour lies a dogmatic positivism. Against mediation, against concrete universality, against generalisation per se, Hemmens prefers the minutia of particularity and immediacy. Humans are material, living beings. That people have to ‘feed, clothe and shelter themselves’ implies that the human has needs regardless of the specific historical and social mediation of those needs. What Hemmens misses is that the very concept of need introduces a split into the subject and the split between subject and object. A minimal definition of the human as a socially labouring, producing and consuming animal is not necessarily an unwelcome inheritance from ‘Enlightenment philosophy’ (8), nor a reflection of the value-form’s domination; it is the basis on which Marxist critique stands. By taking the critique of work to its limits, Hemmens has demonstrated, in my view at least, the limits of the critique of work.