Marx & Philosophy Review of BooksReviews‘Of Concepts and Methods: ‘On Postisms’ and Other Essays’ by K. Murali (Ajith) reviewed by Joshua Moufawad-Paul 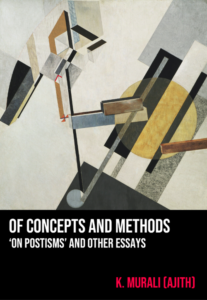 K. Murali (Ajith)
Of Concepts and Methods: ‘On Postisms’ and Other Essays

A significant problem with reviewing a collection of essays is the temptation to write a series of mini-reviews in lieu of focusing on an overarching theme, the latter of which is readily available in a book written as a singular document. This problem is compounded when it comes to Of Concepts and Methods by K. Murali, known by his nom de guerre ‘Ajith’, where many of the collected essays are worthy of their own separate reviews. For those unfamiliar with the author, Ajith is a revolutionary intellectual who has spent the large portion of his life underground in Naxalite circles, India’s Maoist movement. In 2015 he was captured by the Indian state; most of the essays in this collection were written during his incarceration. There is thus a vitality and immediacy to the writing, what the reader should expect from work produced by a revolutionary intellectual. Until now Ajith’s work was part of subterranean revolutionary literature – printed in illegal journals and reprinted in international movement periodicals – known mainly by those connected to or interested in the people’s war in India. Post-incarceration, his work is finally being printed and distributed for a larger audience (thanks to the efforts of the small radical European publishing house Foreign Languages Press), with Of Concepts and Methods being the second new collection published, and it truly does deserve attention. After all, these days it is not often that we get to read contemporary work by Marxist philosophers connected to living communist movements whose life choices prove that, as Marx once quipped, ‘the weapon of criticism cannot replace criticism of weapons.’

If there is something that unites the pieces that comprise Of Concepts and Methods that stands above the multiple essay topics, it is the fact that Ajith is a rigorous and non-dogmatic historical materialist philosopher who is invested in thinking thought according to a concrete analysis of concrete situations. On the one hand, he is not interested in eclectic explorations that, rejecting orthodox Marxism, meander into the realm of obscurantist speculation. On the other hand, he has little patience for formulaic Marxist orthodoxy that prefers mechanical thinking to materialist investigation. In the collection’s introduction he writes:

A constant theme running through all of these essays is that of deepening the critique of mechanical thinking. In this process, I have also tried to engage with views critical of Marxism. The guidance has been the thinking that, both in its emergence and advances, Marxism has drawn from its critical engagement with diverse streams of thought and subsequent synthesis. Its future depends, very much, on retaining and employing this quality in close relation to the practice of “changing the world.” (35)

Hence the first, eponymous essay examines the ‘postist’ (post-modernism/post-structuralism/post-colonialism) rejection of Marxism on the part of Indian intellectuals, demonstrating how Marxism can develop and grow by learning from these criticisms as well as provide a better accounting for social phenomena. In doing so he is able to critique mechanical and Eurocentric variations of Marxism while demonstrating a critical and creative application of historical materialism. Rather than being yet another Marxist critique of postmodernism, this essay is driven by the desire to make sense of the author’s social context and ground it in world history. He asks: ‘How then can we bridge the rupture inflicted by colonialism that cut us off from our thought traditions? How can we ensure their live presence in contemporary thought? We must begin by accepting the material basis of the rupture.’ (56) To accept, understand and theorize this ‘material basis’ requires the tools of the living Marxist tradition (particularly the non-Eurocentric Maoist tradition of which Ajith is a part) since the various ‘postisms’ ultimately can only provide idealist accounts and solutions. And Ajith demonstrates how historical materialism can better account for the same phenomena – colonialism, post-colonial dependency, cultural imperialism, etc. – that its critics also seek to explain but fail to concretely grasp.

In some ways the first essay is a microcosm of the collection. That is, it lays out a dialectical conception of universality and particularity that becomes a guiding theme:

universality is not engendered by “claims” of its trans-historical relevance. That quality is something attributed to it. The source and location of such attribution lies outside universality. By its very nature any universality is relative. That is so because it is conditioned by the particularities it expresses. It resides in those particularities with all their specificities. Therefore, the attribute of being “trans-historical” can be given to a universality only by forcibly separating it from the concrete relations it was abstracted from. Idealism and metaphysics tear apart the dialectical relation of the universal and the particular. They then go on to impose a rigid hierarchy with the universal as supreme. They do not grasp the idea about a material object as a thought product arrived at through abstraction from that material reality. Instead the object is declared to be a manifestation of the “idea,” or as being defined, determined, by the “idea.” Enlightenment thought’s normative models were grounded in such inversions. (43)

Take, for example, the essay ‘On the Laws of History’, which attempts to think a universalist notion of historical unfolding but through the particular circumstances of India. Despite rejecting a crude linear conception of history that is sometimes drawn from Marxism, Ajith argues that the alternative – a rejection of meta-narratives and a focus on particularities divorced from categorical abstraction – leads to its own abstractions that also ignore multiple particularities. Noting that Lenin ‘points out how every [historical] law is a freezing of reality,’ (89) Ajith argues that ‘Marxist categories and laws [should] be applied as abstractions that grasp some essentials and provide orientation. We would be able to refine and enrich them further through creative application.’ (90) According to this perspective, he examines how the historical materialist axiom that history is the history of class struggle applies to caste without simply conflating the categories of class and caste. Through this examination, and his creative application of Marxist historical categories, Ajith demonstrates that ‘[h]istory as it evolved was never linear. […] Even then, the movement of this complex, chaotic whole does reveal certain laws. One can determine certain analytical categories.’ (95)

With linear Marxist conceptions of history in mind, though, it should not be surprising that Ajith addresses Marx’s writings on British India in the penultimate essay. Indeed, it would be remiss for an anti-imperialist Indian Marxist to not address this topic, especially since the post-colonial theorists Ajith examined in the first essay use these writings as evidence for an intrinsic Eurocentrism in Marxism. There are generally three ways of treating Marx’s writing on British India. The first is the aforementioned post-colonial dismissal of historical materialism that is found, for example, in Edward Said’s Orientalism. The second is an attempt to deny Marx’s orientalism by claiming his historical analysis was correct or at the very least partially correct, with Indian Marxists such as Aijaz Ahmed and Prabhat Patnaik, and Marxist historiographers such as Kevin J. Anderson, arguing for such an understanding. The third reading, provided by Samir Amin and Robert Biel among others, is that Marx’s analysis was indeed Eurocentric and incorrect but that historical materialism itself can account for this error because it stands above its individual theorists. Unsurprisingly, Ajith belongs to the third category. Indeed, despite his differences with post-colonialism, he upholds Said’s criticisms of Marx (but not his criticisms of Marxism) while castigating Patnaik for declaring these articles ‘a real classic on Indian history.’ (180) More importantly than placing himself in the above-mentioned third category, however, Ajith argues how historical materialism, as a living science, has developed beyond Marx and his social-historical limitations to actually provide the tools necessary for thinking the phenomena that Marx could not properly think. (187) In doing so he notes that Marx, despite his Eurocentric failings, was able to zone in on the problematic of caste as a ‘decisive impediment’ (188) and that ‘what stands out is his effort to apply materialism in the study of the history and society of the Indian sub-continent, paying keen attention to what he then knew as its particularities.’ (189) Here the necessity of developing a concrete analysis is undermined by a failure to correctly synthesize the particularities and grasp the universal through this synthesis. Hence Marx failed to provide a concrete analysis of the concrete situation, but this speaks to the limitations of individual theorists rather than the collective, living enterprise of historical materialism that stands over and above its interlocuters, no matter how important and clever these thinkers were. Indeed, in ‘The Maoist Party’ – one of the few essays in this collection written before the author’s incarceration – Ajith argues that we need to get beyond the discourse of great man theorists and instead, while recognizing the names of the development of the science, hold each of these theorists up to the rigorous criticism of historical materialism (175-176).

There is, as noted from the outset, much more in this collection than what is highlighted here. Multiple essays demand their own treatment and examination, especially those that investigate ethics and historicity, and longer reviews and discussions could be written about many of them. The few weaknesses that exist are largely circumstantial due to a combination of the essay format that limits the depth of discussion and regional specificity. For example, Ajith talks about the importance of the thesis of the ‘Black Nation’ in the US without an awareness of US settler-colonialism and the national self-determination of indigenous nations – a significant lacuna in Stalin’s work on the national question that recognizes a transplanted ‘Black Nation’ but is silent on the colonized indigenous nations (205). But these weaknesses are few and far between. What makes this collection exciting and refreshing is the feeling that, with every essay, you are reading a Marxism that refuses anti-intellectualism while remaining creative and accessible.