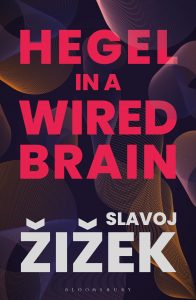 One of Slavoj Žižek’s latest books, Hegel in a Wired Brain, serves as his contribution to the growing stock of work being published in honour of German idealist G.W.F. Hegel’s 250th birthday. Žižek, an antihumanist from the outset, has been discussing posthumanism for over a decade, with it emerging as a central component of his thought in his magnum opus Less Than Nothing (2012) and the more recent Sex and the Failed Absolute (2019). But the present book is devoted to the concept in a unique way not previously explicit in his work.

The wired brain – which ‘refers to a direct link between our mental processes and a digital machine’ (13), the theoretical origins of which can largely be traced to Ray Kurzweil’s notion of Singularity, and the actual prospect of which is now more than just a science-fictional fantasy, as evidenced by Elon Musk’s neurotechnology company ‘Neuralink’ – serves as a concrete point of departure for the book, but one would be wrong to refer to the text as a commentary on the wired brain in all its specificity. Rather, it is an intervention on the question of how even the prospect of the wired brain impacts our understanding of what it means to be a (free) human and what such impacts disclose about the wired brain’s (im)possibility.

But why Hegel in a Wired Brain? Hegel’s famous ‘Owl of Minerva’ comment in the preface to Elements of the Philosophy of Right certainly plays a role in the spirit of the text; only once something is dying and has been quilted by a successor can philosophy then ‘paint grey on grey’ and retrospectively apprehend its truth, hence why Žižek sees the nascent actualization of the wired brain as the inaugural opportunity to truly begin thinking the human as such. Žižek states that the book is ‘not a study of Hegel’ but rather one that takes a ‘Hegelian approach’ (12). Žižek is notorious for acting in fidelity to masters like Kant and Hegel by subordinating the letter of their systems to their underlying creative impulse and the present work certainly continues this tradition. He asserts that to be a Hegelian today is to ‘take Hegel not as a conclusion but as a starting point and ask: how would our present state of things look from this starting point?’ (2). In other words, if Hegel was writing his Philosophy of History today, toward what conclusions would his dialectical spirit lead us?

For those familiar with his enterprise, Žižek’s Hegel is not the Hegel of totality, teleology and seamless logical development that most postmodern thinkers caricaturize him as, but rather the quintessential thinker of immanence, contingency, historical openness and parataxis (the latter being a new addition to Žižek’s list of Hegelian predicates, although a rather peculiar one given the seamless transitions that characterize Hegel’s groundbreaking Science of Logic). In an ostensibly Hegelian fashion, Žižek paratactically structures the present book, consisting of seven essays and a long-winded epilogue.

Chapter one examines the possibility of a posthuman police state, wherein subjects are unlikely to be able to become conscious of their very unfreedom. The following chapter discusses the limitations of the wired brain and interrogates whether the worldly ‘obstacles’ from which its proponents desire to liberate us, such as language and death, can actually be eliminated without also eliminating that which they appear to obstruct, such as free communication and immortality.

Chapter three examines the possible socio-political consequences of the wired brain, on account of the fact that the latter will undermine the centrality of the self-sovereign individual presupposed by liberalism. Žižek poignantly ponders what new forms of domination and exclusion might arrive with the wired brain, but in a properly Hegelian (viz. non-eschatological) manner, avoids making normative judgements on the wired brain itself, as one cannot jump ahead of history to pre-emptively evaluate its outcomes. Again, it is the wired brain’s effectivity Žižek interrogates – if it does successfully emerge, it will institute a new normative horizon which will render any moral assessment we make from within the current context superfluous.

The fourth and fifth chapters elucidate the quasi-theological dimension of the wired brain using much of Žižek’s already-developed philosophy of religion, criticizing what many proponents of the wired brain see as its potential to redeem us from the Fall as it were; that is to say, to make us like God. For Žižek, the Fall creates the dimension from which it fell – it posits its own presuppositions and thus any notion of redemption or reconciliation cannot but be conditioned by that which it seeks to flee. This is perhaps the book’s most crucial insight, which also has import vis-à-vis other utopian visions, such as Marxist communism; while the wired brain is anticipated by many as an emancipatory prospect, it can only be designated as such from the perspective of the current symbolic landscape. ‘Every image of [the Nietzschean] “overman”’, Žižek writes, ‘is an illusory projection which only has sense from within the horizon of our human finitude’ (140). True emancipation ruptures the symbolic coordinates from which it emancipates itself, and thus cannot be theorized prior to its arrival, an insight which it would behoove much of the contemporary left to recognize.

The penultimate chapter, an incisive essay on the reflexivity of the (Lacanian) unconscious, departs from the book’s streamline, carefully balancing a dialogue between theory and contemporary exemplifications, but nonetheless serves as one of Žižek’s most cogent expositions on the subject to date (although, it is unfortunate that the book’s most rigorous discussion is grounded in Lacan rather than its title figure). He perspicaciously makes the case that the unconscious reflexive gesture by which one chooses one’s own existence may elude the wired brain entirely (95), and thus may render the latter impossible. Žižek also ponders whether the ‘virtual coordinates’ that negatively supplement our interactions, vital to communication even if only in an absential way, will persist in the wired brain. Will the presence of absence which invariably informs our quotidian subjective experiences be discernible?

The final chapter builds upon the insights of the preceding by predicting not only the problems with which the wired brain will present us as human subjects, but also by exposing the impracticalities which this utopian vision fails to account for, such as the impossibility of individual subjectivity’s elimination without eliminating the human altogether. Žižek asks: ‘What if Singularity is not (or, rather, will not be) an immersion in a collective space but an extremely solipsistic state’ wherein each Self will be ‘reduced to its selflessness, no longer a self as opposed to others in an intersubjective space’? (109). Žižek is certainly at his Cartesian apotheosis here, but rather than dogmatically asserting the latter’s validity, in a properly Hegelian fashion he simply illuminates the wired brain’s theoretical presuppositions and lets their internal contradictions unfold themselves on their own terms. In so doing, Žižek confirms both the necessity and the inescapability of the Cartesian stance which proponents of the wired brain aim to supplant.

One should note in passing that the effects of the now-trite Deleuzo-Guattarian exhortations to eschew subjectivity and intuitively tend toward the flux of the ‘molecular’ (similar to the telos of Singularity) are clearly identifiable in contemporary Western culture, particularly online. While such commands – which remain foundational to the work of today’s foremost Deleuzo-Guattarian posthumanist interlocutors, such as Rosi Braidotti – were intended to propel us toward a world devoid of false universalisms and repressive structures, they have had inverse effects (an obvious result of drawing conclusions regarding what is to be done from foundationalist philosophies): an increase of self-referentiality and hyper-fragmentation. Thus, Žižek sharply hits the mark in questioning whether the wired brain, insofar as it is proposed as a vehicle to transcend (what appear to be) the obstacles that block our collective passage into divine collectivity, will be successful or whether it will simply cause subjectivity to ‘persist in its negation in an even purer form’ (142).

Finally, the epilogue serves as both a quilting point for the book, as well as a possible standalone text, comprising the book’s central elements and shading them with an eye toward the possibility of a digital apocalypse, with its economic, social and sexual consequences considered. He asserts that the eventual rise of the wired brain will indeed be apocalyptic, but after etymologizing the latter (‘uncovering’ in Ancient Greek), he suggests that the type of apocalypse to which it will give rise remains unbeknownst. Though it is clear Žižek is anything but a wired brain enthusiast, he truly abstains from taking sides and adopts, as he often does, the disinterested position of the psychoanalyst and takes the question of the wired brain seriously. His basic conclusion is that we should not assume the wired brain, if it somehow proves to be possible in concreto, will bring us into liberated territory, but rather to a space defined by even more stubborn contradictions than those which define human experience today. While some may deride this as typical Žižekian pessimism, we ought to keep with the book’s Hegelian spirit and enact a dialectical reversal so as to see this pessimism as resolutely courageous and endowed with the emancipatory impulse that is a necessary supplement to leftist politics in the present landscape.