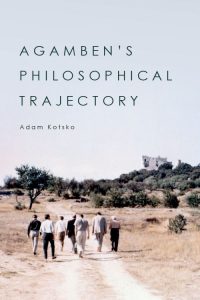 Paul Gorby is pursuing a PhD at the University of St. Andrews. His research focusses on critical …

Attempting to present an overview of the trajectory of any philosopher’s thought is a daunting task, and one made all the more difficult when the subject under discussion is a philosopher as challenging and varied in his thinking as Giorgio Agamben. Thankfully, however, Adam Kotsko’s new book, Agamben’s Philosophical Trajectory, does a masterful job of weaving together a narrative of Agamben’s work as a whole while consciously avoiding the trap of treating Agamben’s 60-year career as possessing an impossible consistency. While this book was not written as an introduction to Agamben, its comprehensive and chronological coverage of his oeuvre means that it can serve as a fantastic starting point for those new to the often extremely challenging thinker. At the same time, it can work as a means for those who are familiar with some of Agamben’s writings to get a grasp on his wider project. Even those well-versed in Agamben’s political theory, for instance, will benefit from Kotsko’s discussion of Agamben’s earlier writings.

One of the first issues those seeking to read Agamben face is the question of where to start. For those interested in the political writings, which brought Agamben fame in the English-speaking world, the most obvious course is to read the Homo Sacer series, however even determining what order to read these works in is challenging. Aside from the first title, every book in the series was published out of order relative to its placement in the series, and as the series expanded into new volumes, the ordering of books within the series changed as well. To further confuse matters, some books serve as prequels to others in the series, despite being published after the books they supposedly precede. While Agamben himself has insisted on the architectonic ordering of the series – publishing in both English and Italian an omnibus edition of every book in this order– Kotsko’s study provides a very productive chronological reading. This approach helps to clarify some issues, especially those of methodology, which may confuse even the most careful readers of the Homo Sacer project. For this reason, this reviewer would recommend that those seeking a starting point for the work of Agamben begin with Kotsko’s book and then attempt the Homo Sacer series in the architectonic order.

Following an introduction which lays out the purpose of the book and its placement relative to related literature, Kotsko’s first chapter outlines Agamben’s writings from the 1960s to early 1980s. This work is largely non-political in nature, focusing on questions of linguistics and poetics. Aside from offering an outline of the major works from this period, this chapter has two central purposes: the first is to argue that, contrary to much received opinion in Agamben scholarship, the early works do not ‘lay the foundation’ (15) for the political writings, as though Agamben already had plans to transition from linguistics to politics. Kotsko’s second purpose is to claim that Agamben’s work of this period is consciously apolitical because he ‘viewed the politics of his time as beneath contempt’ (16) on account of the supposed necessity of choosing between Western capitalism and totalitarian Communism. While the former argument is made convincingly, on the second point Kotsko’s analysis is arguably at its weakest. It makes sense for Agamben to have rejected the false choice between the USA and USSR, but this hardly explains his refusal to engage with politics altogether, especially considering that even at this time Agamben was drawing from politically-inclined thinkers such as Hannah Arendt, Walter Benjamin and Guy Debord. Many thinkers during the Cold War refused both Western capitalism and Soviet Communism while still engaging in political critique, so the question of why Agamben initially shunned politics cannot be explained simply by reference to the historical context.

Moving into the 1980s and 1990s, Agamben’s work begins to take up the political, and these early political writings are the subject of Kotsko’s second chapter. The works from this period include the essays which came to be collected in Means Without End, the idiosyncratic The Coming Community and the first two volumes written for the Homo Sacer project: Homo Sacer and Remnants of Auschwitz. Here we see the development of some of the central issues which would come to define Agamben’s political thought: sovereignty and the state of exception, the notion of bare life and the idea that the concentration camp constitutes the paradigm of modern politics. Kotsko also provides an excellent reading of the much-misunderstood distinction at the core of the Homo Sacer series: the division Agamben draws from ancient Greek thought of zoe and bios. The former refers to the mere biological fact of life, while the latter articulates a form of living proper to an individual or group. Agamben’s desire to overcome this division is central to the trajectory of his thought, and while the figure of the homo sacer – the person excluded from the political-legal system and therefore exposed to the unmediated violence of sovereign power – is central to his understanding here, Kotsko is quick to point out that Agamben does not understand the figure to be liberatory. Rather, it is the notion of ‘form-of-life’ which Agamben sees as offering potential to overcome the zoe­–bios distinction in a positive and emancipatory way.

In the third chapter, Kotsko covers the remarkable range of material which Agamben produced in the first decade of the 2000s. The chapter is an exceptional piece of writing, covering immense ground with great skill; discussed are three works in the Homo Sacer series (State of Exception, Stasis and The Kingdom and the Glory) as well as books and essays external to the project but often closely related to it (such as The Signature of All Things, The Open and essays collected in Nymphs, Profanations and What Is an Apparatus?). Here Kotsko’s capacity for summary is at its best, offering excellent reports of the central arguments of these crucial works, and effectively explaining the relations between the works included in the Homo Sacer project and those adjacent to it. Of particular note is Kotsko’s discussion of The Kingdom and the Glory, one of the longest works by an author noteworthy for his short and densely packed books. The book is a sprawling one, moving from the ancient Greek notion of oikonomia, to medieval theological debates, to the contemporary relation between government and media. While Kotsko does an excellent job of explaining how Agamben’s argument holds together, he still demonstrates ‘the extent to which [Agamben] is barely holding together the various threads’ (125) due to his lack of a clear methodology. The chapter closes with a discussion of The Signature of All Things, Agamben’s attempt to develop and articulate his archaeological methodology, which is influenced by but distinct from Foucault’s archaeological and genealogical methods. While many would still understandably be critical of Agamben’s ‘less empirical than intuitive’ (131) method, Kotsko’s discussion is helpful in clarifying how it would come to influence the remainder of the Homo Sacer project.

In the fourth chapter, Kotsko’s intimate familiarity with Agamben’s work comes to the fore, as we move into works which Kotsko himself translated. These include works from the Homo Sacer project such as The Sacrament of Language, Opus Dei, The Highest Poverty and the series’ final volume The Use of Bodies. Some of these books are arguably among Agamben’s most challenging and least accessible, in part due to their intense focus on theological issues which can feel divorced from the political issues that attracted many to Agamben’s work. Kotsko’s detailed discussion of these writings leaves the reader, even the reader familiar with Agamben, feeling on much more stable ground and far more certain of how, for example, the examination of Franciscan monks in The Highest Poverty relates to the rest of Agamben’s political project. Nevertheless, a reader unsympathetic to Agamben may come away from this chapter frustrated that the trajectory of Agamben’s political philosophy reaches its apex in the notion of inoperativity, a concept not worked out in practical terms beyond the idea that ‘something like a general strike […] could be what Agamben has in mind’ (177). Agamben is an undoubtedly brilliant thinker, but as this remark from Kotsko makes clear, a limitation of his thought is how heavily it leans towards the abstract at the expense of the practical.

In the final chapter, Kotsko discusses the works published since the conclusion of the Homo Sacer series, including Agamben’s memoir which remains untranslated into English. This phase, as Kotsko points out, marks a return to themes and issues central to Agamben’s earlier works, and, as the publication of a memoir makes clear, takes on a much more reflective tone. Once again, Kotsko proves himself to be an adept reader of Agamben, summarising intricate and fascinating material into short discussions, always with an eye to the common themes that have preoccupied Agamben throughout his life. The chapter concludes with a discussion of Agamben’s decision to publish the entirety of the Homo Sacer series in a single volume and reflects on the issues of ordering and chronology which can serve to perplex new readers.

In his conclusion, Kotsko reflects on the ways in which Agamben’s works have often felt both highly contemporary and out of step with the historical moment. His writings on how Western states are founded on exclusion and encampment came on the cusp of Western preoccupations with migration and refugees, and his examination of the theological roots of contemporary economic notions preceded the financial crash by a matter of months. Nevertheless, Agamben’s work also shows signs of being out of touch with the mood of his time, as his recent controversial comments on the coronavirus lockdowns have shown. However, for Kotsko, the value of Agamben’s work is that it encourages us to question the very foundations of so much of our contemporary society and how it is structured. The great value of Kotsko’s book, in my opinion, is that it offers readers an ideal overview of Agamben’s thought, allowing them to think through important, epoch-defining issues of politics and philosophy alongside one of the most important and challenging philosophers of our age.