Marx & Philosophy Review of BooksReviews‘Hegel, Marx, Nietzsche, or the Realm of Shadows’ by Henri Lefebvre reviewed by Kaiyue He 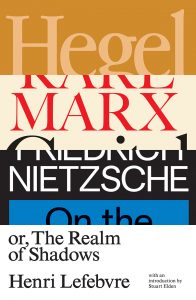 Henri Lefebvre
Hegel, Marx, Nietzsche, or the Realm of Shadows

At the age of 74, philosopher and sociologist Henri Lefebvre published his Hegel, Marx, Nietzsche, or, The Realm of Shadows (1975), between The Production of Space (1974), and The Critique of Everyday Life (1981). The book cover combines those of three other books, including Hegel’s The Difference Between Fichte’s and Schelling’s Systems of Philosophy, Marx’s Capital and Nietzsche’s On the Genealogy of Morals: Ecce Homo (1887). This combination indicates Lefebvre’s understanding of the modern world through these three foundational thinkers.

Hegel, Marx, Nietzsche opens with a lengthy introductory chapter on ‘triads’, followed by three sections on each thinker and a conclusion and afterword. In the introduction, Stuart Elden, author of Understanding Henri Lefebvre: Theory and the Possible, provides a detailed summary of the interactions of Lefebvre’s works and the theories of the three German philosophers, as well as Lefebvre’s contribution to the scholarship on each of them. This background knowledge gives readers an overall understanding of the context of Lefebvre’s book and helps to locate the influence of Hegel, Marx and Nietzsche on different aspects of Lefebvre’s theory.

In ‘Triads’, Lefebvre deals with the ‘Hegel-Marx-Nietzsche’ conjunction and the continuity and discontinuity between the works of these thinkers. In his view, Hegelian thought is focused on one word and one concept, the state; Marxist thought strongly emphasizes the social and society; and Nietzsche meditates on civilization and values (3-4). These three figures are regarded by Lefebvre as stars in one constellation. His book focuses on studying the links and tensions of their theories in the context of modernity. In this chapter, Lefebvre also explicates the rationale behind his choice of the triadic thought and of three German thinkers at the gateway to modernity. ‘Hegel would be the Father, the law; Marx, the Son and faith; Nietzsche, the Spirit and joy’ (30). Through this triadic model, Lefebvre compares the relations of three thinkers’ theories to the Trinity. He aims to reveal a picture of the modern world in all its complexity and contradictions through a detailed investigation of their ideas.

In ‘The Hegel File’, drawing on Hegel’s philosophical works, such as The Phenomenology of Spirit, Science of Logic, Philosophy of Right and Aesthetics, Lefebvre illuminates Hegelianism around the concepts of the state, knowledge and cognition, as well as the dialectic method. He discusses the social status of knowledge in France and in Europe before the nineteenth century and investigates the state’s institutionalisation of cognition ‘in the form of academies and academicism’ (50). For Lefebvre, Hegel emerged as the thinker of the French Revolution. The influence of Hegel on Marx, including Marx and Engels’s challenge to Hegel’s dialectic method and Marx’s modification of the concept of social labour in the Hegelian line, are also thoroughly interrogated in this chapter. As Lefebvre notes, Marx reached a conclusion incompatible with Hegelianism: ‘the state itself is a concrete abstraction’ that ‘demands a foundation’, rather than ‘the celestial transcendence of the Idea’ (76). Rather than following Marx’s approach, Lefebvre observes the inadequacy of explanation about the support that unifies the social ensemble in Marxism. He argues that ‘the support of social relations is space’ and his book The Production of Space includes the analysis of social space (76). Following the explanation of Hegelianism regarding the system of productive labours and the system of needs, Lefebvre expresses his doubts about the Hegelian model of the state, due to its ‘misunderstanding [of] social class’ (81). This chapter ends with the definition of knowledge, cognition and science as three key concepts of Hegelianism.

In ‘The Marx File’, Lefebvre deals with the term ‘Marxism’. In his opinion, Marx’s thought does not take the form of a system as ‘Marxism’ and Marx’s theoretical projects remained incomplete. What Marx’s writings contain is better than a system; they represent ‘a vocabulary, a terminology, a language’, argues Lefebvre (92). By contrast, ‘“Marxism” exists only in the form of an interpretation’ (96). Lefebvre goes on to address the question of whether the contemporary world is Marxist or not and remarks that ‘Marx’s thought […] has been changed into ideology; the radical critique of the state by Marx, Engels and Lenin has been changed into state doctrine’ (120). The second focus of this chapter is the comparison of Marx’s thought with Hegelianism. Lefebvre observes not only Marx’s harsh critique of Hegelianism, but also his appropriation of Hegel’s materials: ‘[m]ore Hegelian than Hegel, and yet profoundly anti-Hegelian’ (97). Lefebvre further illuminates the differences between Hegel and Marx’s analyses of the social classes and the relations of production as the social basis of the political state. In terms of the forecasts in Marx’s writings, Lefebvre notes that Marx’s short-term predictions about ‘the end of competitive capitalism’ can be matched with historical facts and his long-term prophesy of ‘the coming of automatic machinery and the automation of production’ is accurate (102). As Lefebvre concludes, ‘economism and productivism drawn from Marxism and justified by appeal to Marx […] have invaded the modern world’ (126).

In ‘The Nietzsche File’, Lefebvre points out the misunderstanding of Nietzscheanism in France and in Germany and emphasises the importance of studying Nietzsche’s original texts. He illuminates Nietzsche’s critique of modernity, his glorification of poetry, as well as his thunderous declarations against the state and Germany, which are contemporaneous with The Gay Science and Thus Spoke Zarathustra. More comparisons between the theories of Hegel, Marx and Nietzsche are made in this chapter. Lefebvre puts forward that the common ground between the Marxist project and Nietzsche’s thought is their opposition to Hegelianism as a theory of the state. Apart from this, Nietzsche is critical of Hegel’s theory of history, language and knowledge. Lefebvre explicates Nietzsche’s theory of language, which is opposite to that of Hegel. For Nietzsche, language is poetical and creative and is ‘a power of metamorphosis’ (157). Lefebvre also illuminates the relationship between the Nietzschean theme of ressentiment and the Hegelian concept of alienation, as well as the similarities and differences between the Marxist project and Nietzsche’s thought. At the end of this chapter, Lefebvre offers a detailed explanation of Nietzsche’s theory of the body. For Nietzsche, ‘the body contains depth’ and the body of poetry, music and dance is full of energy (184). It is considered by Nietzsche to be fundamentally opposed to power.

In ‘Conclusion and Afterword’, Lefebvre summarises the perspectives of Hegel, Marx and Nietzsche, and proposes that we need to read the work of all three to have a full understanding of modern society. He concludes that space is where the objective (socio-economic) and subjective (poetic) intersect. This indicates that Lefebvre’s theory of space, expounded in The Production of Space, is influenced by the theories of these three thinkers.

This book is also useful for academics or students to work on the philosophy of these three thinkers and recognise their relevance to modern society. On the one hand, it points out the neglected aspects of the theories of each thinker. In ‘Marx File’, for example, Lefebvre highly recommends Marx’s The Critique of the Gotha Programme, arguing that the theory of social surplus product has been neglected by most Marxist currents. Lefebvre also notes Nietzsche’s prediction of ‘the end of ends’ (‘God, “man”, history, capitalism, the state, and subsequently the human species and even life on planet “earth”’) ahead of other writers (194). At the same time, Hegel, Marx, Nietzsche deals with the major concerns of modernity, such as the common ground and differences of state capitalism and state socialism (80). Lefebvre’s approach to conducting a comparative study is also valuable in its own right. His triadic model provides exemplary comparisons of the theories of Hegel, Marx and Nietzsche on their key concepts. Overall, this book is highly commendable and should be read alongside Lefebvre’s theoretical works to afford the reader a richer understanding of the origin and theoretical background of his philosophy.