Marx & Philosophy Review of BooksReviews‘The Question of the Left and Its Future: Notes of an Onlooker’ by Mir Shamsuddin Adib-Soltani reviewed by Kaveh Boveiri 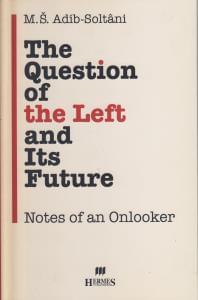 Mir Shamsuddin Adib-Soltani
The Question of the Left and Its Future: Notes of an Onlooker

In the contemporary Iran, and notwithstanding the sanctions imposed by the United States and its allies, the expensiveness of books, and the restrictions imposed by the government, the progressive books are generally well embraced. A new translation of the Grundrisse published just last week is the last example: the 1100 copies of the book will be undoubtedly sold in a few months.

That being said, although Marxist books in particular are being widely translated in Iran, the number of books written by Iranian leftist writers writing from within the boundaries of Iran is extremely limited.

Now, imagine a scholar who knows Ancient Greek, German and English good enough to translate Aristotle’s Organon, Kant’s Kritik der reinen Vernunft (Critique of Pure Reason) and Hamlet into his mother tongue, Persian; then add to your list a dozen of languages at a similar proficiency; then remind yourself that this scholar is a physician. You may expect that if he publishes a book on his longtime intellectual engagement, it should be a mega-synthesis – you are right. You may also think that once such a book is published, it must have remarkable reverberations – you are wrong! Why almost no reverberation in Iran? Partly, because the book was written in English. Why not abroad? Perhaps because it was published in Iran and the author is not known overseas.

The fruit of an ‘inner urge’ (4), The Question of the Left and Its Future adopts a phenomenological-critical approach and addresses the question of the left in its relations to global issues – references to Iranian culture and political issues are very limited. In reading this book, the level of erudition is indescribable. It is very difficult to find a major thinker in general or a philosopher in particular, from antiquity until today, whose work is not addressed. In some cases, the precision becomes very close to obsession. For instance, for the same term, ‘petit bourgeois’, there is a reference to Oxford Dictionary, Le Petit Robert and Universal-Duden! Adib-Soltani presents his views in a spiral form: the same issues discussed somewhat emphatically here are later addressed (mainly in postscripts) with more reflected insights.

In early pages, Adib-Soltani reminds us of two points: ‘Leibniz called his philosophy ‘active eclecticism’’ (12) and also ‘in philosophy ideas are more important than proofs, whereas in mathematics it is the proof that is important’ (4). His book bears similarities with both of these: his not fully-fledged synthesis is more like a juxtaposition of an extremely wider range of insights, from quantum mechanics to mathematics and logic to theories of socialism, for which sufficient arguments and proofs inevitably cannot be mobilized in a two-hundred-page manuscript.

The book is presented in two parts. While these are not originally written to be published in a book, their relation is not quite unclear.

The first part, ‘On the Question of the Pre-Modern, the Modern, and the Post-Modern’, with the presentation of some generalities, paves the field for the second part. He introduces three conceptions of truth and relates each of them to one of the three eras of human history: the ontological conception of truth is related to the non-modern or premodern era, the epistemological-logical conception to the modern era and the constructive conception to the postmodern era.

The relation of this part to the second becomes clear when we ask where left finds itself in this cartography. The second part, which bears the same title of the book, is a philosophical elaboration of socio-political but also economic aspects of questions of the Left.

Why does the Left belong to the modern era? Because it is not conceivable ‘without the Cartesian / Kantian concept of the ‘subject’’; it is ‘basically rational and scientific’; ‘it is inherently intertwined with the idea of progress’; it has an inherent tendency to change the status quo; and finally because it adopts a critical ‘futuristic approach’ (39) towards the status quo. The main representative of the Left, Karl Marx, this polymath, who thinks in terms of totalities and ‘out-Hamlets Hamlet’ (53): the fictional character is introduced as ‘the Proto-left-winger’ (45). Marxism, according to Adib-Soltani, transforms justice as a virtue into a concrete, practical social justice, conceptualizes it, and shows how it may be achieved.

Marx, however, is criticized on different grounds both on minor issues, for having confused ideologia and idialogia in classical Greek in his dissertation, for instance, and on major issues for being less progressive than many as regards women’s rights. He was ‘so engrossed in class-struggle as not having paid any serious attention to gender or race’ (118). He, along with Engels, ‘failed to appreciate the spiritual needs of human beings’ (122). Still other important problems are addressed: Given that limitation and its measurement is an ontological feature of the physical world, what are the limitations of the abundance attributed to the postcapitalist society? We need to address crises in our modern era while we take these into account. The relation between class and more abstract arts, such as music, also requires further elaboration. More importantly, Marx’s economic model is said to be incapable to respond to the complexities of our era. Regarding the word ‘dictatorship’ in the dictatorship of proletariat, the reader finds one of the abundant cases where he uses a humorous tone: ‘If I had been Marx’s editor, I would have beseeched him, ‘Herr Doktor Marx, for goodness’s sake, please change this word!’’ (107). Stylistically, throughout the book, and particularly in his criticisms, the writer engages the reader to think along with him: ‘Now dear reader, what do you think?’ (38), ‘Is not the antithesis between mental and physical labour already disappearing?’ (83).

Such a book would be missing an imperative issue if it did not tackle the classical question: ‘What is to be done?’ On this, Adib-Soltani has a lot to say. In what he proposes, he hopes that he ‘won’t prove to be a kibitzer’ – the person who offers unwanted advice or commentary. Before everything, we should admit that ‘the Left cannot hope to proceed with Marx’s and other Marxist classics’ doctrines alone’ (149). He reformulates the opening of the Manifesto: ‘Two spectres are haunting Europe and America: The Spectre of Karl Marx and the spectre of socialism’ (191).  But to fight for socialism, and if we want to go beyond ‘Long live alkalinity – Down with acidity’ the best way ‘will be to produce a positive different idea and present it to the public’ (23). In adopting an evolutive standpoint, he says that instead of the dictatorship of the proletariat we need the hegemony of the proletariat or rather the democracy of the proletariat – not social democracy but democratic socialism. With regards to social movements ‘The Left should continue to champion the cause of democratic socialism / socialist democracy, the cause of social justice’ (157). For this ‘a new and more sophisticated economic model must be constructed for establishing democratic socialism’ (164). Politically this entails both ‘a loose world government’ (173) and ‘direct accountability of the government to the people’ (174). For this, ‘the Left has to rely more on Human Reason itself instead of history’.

Politically this means the simultaneous cultivation of the left and right, and in a more abstract level, the cultivation of dialectics and formal mathematical logic. In this way, we will have the sublation (Hegel’s Aufhebung) of ideas, their negation, further elevation and preservation, their rise to a higher level without bearing the negative features they bore. In doing this, Marxism, which belongs to the modern standpoint can propose an identity for a postmodern world, if by postmodern one understands an era with the decomposition of identity as its characteristic. He expresses his dream with infatuation: ‘It would be fascinating if one day all the eligible human beings voted for a single world parliament’ (177).

In the end of the book, the reader will be astonished by the number of provocative, but admittedly mainly unargued theses put forward in the book, less so when the extension and the depth of the knowledge of the writer is reminded of.  On the side of the reader, here as throughout the book, Adib-Soltani, reiterates what is found in the beginning of the book: he wants the reader to help ‘carrying out this project and for presenting the ideas contained in it, in a clear and succinct fashion.’ (21)