Marx & Philosophy Review of BooksReviews‘Only People Make Their Own History: Writings on Capitalism, Imperialism, and Revolution’ by Samir Amin reviewed by John McKay 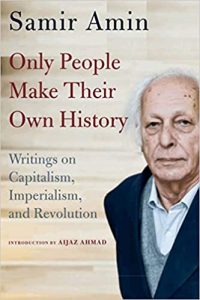 Samir Amin
Only People Make Their Own History: Writings on Capitalism, Imperialism, and Revolution

For many of us the later writings of a great thinker offer a particular allure – the mature reflections on a life’s work, the winnowing of major themes and long-term passions, the admissions of mistakes or the elation of being proved right all along. Sometimes these swansongs disappoint, but not this one! For those of us who have studied and gained much from Amin’s many writings over the years, the opportunity to have in one relatively compact volume some final thoughts on the key arguments advanced and elaborated over a long and productive career is extremely valuable. The book contains 13 papers published in the Monthly Review, beginning in 2012 and ending with one that appeared in October 2018 just after Amin’s death in August. An introduction to the volume by Amin’s friend and colleague, the Marxist philosopher Aijaz Ahmad, provides a short summary of Amin’s life and career and puts his ideas into their broader context.

Sharing any time at all in Samir Amin’s company was very much like sharing a patch of sunshine in the midst of the grey and the dark. His physical frame was rather small and began giving away whiffs of frailty in the last years, and yet his movements remained agile, exuding enthusiasm, as if the body was forever electrified by reservoirs of political and intellectual energy (31-2)

I first met Samir Amin in the late 1960s when he visited the University of Dar es Salaam where I was working in a rural development research institute. I was then very young and dazzled by both the promise – or so it seemed then – of the socialist revolution being pioneered by Julius Nyerere and by the excitement of discussing development issues in what I still regard as the most challenging and rewarding university environment in which I have ever worked. Part of the stimulation was provided by the regular visitors that were attracted to this hotbed of ideas, and one of these was Samir Amin. He was not yet as famed as he was to become, of course, but he had a certain presence, a quiet confidence and sincerity that demanded attention. Some years later I shared a conversation with him under a mango tree in India, a vivid experience that has stayed with me ever since.

Aijaz Ahmad highlights some of the major elements and lines of argument in Amin’s many writings, suggesting that there were two phases in his exploration of major themes in development: between 1957, when he completed his doctoral thesis in Paris, and 1970, a focus on a general theory of capitalist accumulation and the impact on individual countries; and after 1970, when he wrote more on the political history of imperialism, the responses by national liberation movements and structural changes in capitalism as it creates and responds to new conditions. Here both major themes are represented in Amin’s last articles. The first two contributions ‘The political economy of the Twentieth Century’ and ‘World Poverty, Pauperization and Capital Accumulation’ demonstrate his ability to portray and explain the forces underlying great sweeps of development in global capitalism, while ‘Contemporary Imperialism’ and ‘Revolution from North to South’ focus on responses to current global trends. Other essays explore recent developments in China, the dangers of political Islam – which he regarded as assisting the forces of modern imperialism – and the return of Fascism in contemporary capitalism, but it is Amin’s contribution as a major thinker about Marxist thought and its importance in the current phase of capitalist expansion that for me are the real gems in this collection – and as is emphasised in the introduction Amin “was one of the rare diamond cutters of the age” (32).

Reflecting on Amin’s rich and productive life, Aijaz Ahmad suggests that for Amin the foundational moment for the global order in the Post War period was the making of the ‘imperialism of the triad’ made up of the United States, Western Europe and Japan. The goals of this core group – as well as the responses that have eventuated and might appear in future – resonate throughout these essays. For those of us grappling with the formulation of a development theory that can replace the neoliberal paradigm that is still dominant – although widely criticised and now showing distinct cracks in its edifice – these essays offer much food for thought and a huge measure of inspiration. Amin is usually portrayed as a proponent of dependency theory, a perspective that has been subjected to much criticism, but in this volume we can see how he has risen above many of the shortcomings that are levelled against this school of thought, and how the ideas that he has pioneered can be indispensable ingredients in a post-neoliberal development theory. Amin’s theoretical position, as he describes it, is much closer to that of Paul Baran and Paul Sweezy than some of the other dependency theorists such as Andre Gunder Frank and is thus more dynamic and historically informed. Both the Centre and the Periphery are constantly changing, and as a result their linkages and interactions are always being modified, but the basic structures of imperialism and exploitation remain. In the modern world, he argues, new forms of polarization have crystallised around what he calls ‘five new monopolies’ that benefit the nations of the triad: the control of technology, global financial flows, access to global natural resources, media and communications, and weapons of mass destruction. The identification of this structure allows Amin to be much more specific about exactly how exploitation takes place at a global scale. One of the most frequent criticisms of dependency theory – apart from its perceived static and ahistorical nature – has been its inability to describe just how the mechanisms of exploitation actually operate, but here Amin points to one of his key theoretical contributions, his research on the ‘law of globalised value’(221-2). This law of value, and its results on the ground, are not the result of pure economic rationality that can be separated from social and political forces: rather it is the condensed expression of the five new monopolies. Amin explored these ideas in much more detail in his The Law of Worldwide Value published in 2010, but the concepts echo throughout this collection, and offers us a way of moving forward with a more sophisticated way of viewing the dynamics of contemporary imperialism.

Amin’s contribution to value theory has, of course, not been without its critics. In some quarters he has been criticised for moving beyond conventional Marxist analysis, but at several points in this collection he meets this argument full on. Indeed, Aijaz Ahmad opens his introduction with a quotation from The Law of Worldwide Value in which Amin stresses the necessity for Marxists, while recognising the unequalled power of Marx’s writings, not to stop at Marx but to start with him. The radical critique that Marx initiated is itself “boundless” but is “always incomplete and must always be the object of its own critique” (7). For Amin, Marx must be read rigorously but also creatively to aid our understanding of capitalism as it manifests itself through ongoing evolution. This belief was one of the major themes throughout his writings and appears at many points in this collection. His rigorous approach to Marxist analysis appears here in several essays, notably ‘Reading Capital, Reading Historical Capitalisms’ but at the same time there is a constant insistence that these tools of analysis must always be refined, improved and applied to new situations. This message is particularly clear in two of the most impressive contributions: ‘Revolution or Decadence: Thoughts on the Transition between Modes of Production on the Occasion of the Marx Bicentennial’ and ‘The Communist Manifesto, 170 Years Later’. Here Amin stresses the role of the peoples of the South in fighting against imperialism, recovering control of their own natural resources – taken from them not only by outside powers but also “internal colonialists” (103) – and moving towards a socialist transition. This is, he suggests, a new wave of independent initiatives from the peoples of the South as they- to echo the title of the collection – seek to make their own history.

This then raises the big question of how, and starting from where, a successful struggle against imperialism can be mounted. In spite of numerous setbacks for the cause, Amin never lost his sense of optimism, especially in the ultimate ability of peoples to make their own history. He continued to insist that the peasantry still made up half of the global population and remained a potent force for change. Conditions in the periphery, which is always subject to the merciless exploitation of both internal and external colonialists, are always unstable and often on the verge of revolution. This was a new and potent force, he insisted right to the end of his life. Unlike many others he never really gave up on China and its potentially constructive role in this global struggle. Until land in China becomes fully privatised, he argued, one should never believe that the country had returned to capitalism. As we know, debate in China on the land ownership question is still very polarised, but it says much about the man that gave us so many insights in his writings, and whose character and considerable strengths appear so clearly through the essays in this volume, that his constant message was to never give up hope, continue to develop our analytical tools and constantly refine them to deal with new realities.