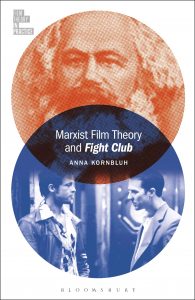 Damian Winczewski is a doctor of philosophy from University of Szczecin. He holds also master of …

Marxist Film Theory and Fight Club, despite its catchy title and relatively small volume, is a serious book that will benefit both those interested in Marxism itself and those whose interests lie within film studies more generally. This is facilitated by the structure of the book which is divided into two parts. In the first part, the author begins with a concise narrative of what Marxist philosophy is and what it concerns, taking into account the crucial role of political economy and criticism within Marxist thought. In the following, it is, above all, a story about dialectics and its main categories. According to Kornbluh, materialistic dialectics fit perfectly well in the analysis of social formations as well as in reflection on culture and art. Contradiction turns out to be the main category allowing for the study of forms existing in social life, as well as those found in films, literature or works of art.

Speaking more specifically about film, the author skillfully maps successive concepts: mode of production, ideology, creative labor, and mediation. It is worth noting that Kornbluh in her relationship to Marxist philosophy remains closest to Althusser (and also Żiżek) due to her understanding of ideology as a kind of practice, action, and not as “false” beliefs exemplifying “false consciousness,” which was popularised by the young Lukacs. Also, in her understanding of other basic categories of Marxism (like base and superstructure etc.) she is faithful to the works of the French philosopher. For someone familiar with Marxist philosophy, the first parts of the book that move the ABC of Marxism may seem trivial. However, it is essential to appreciate that the author herself seeks out the links between the dialectic of society and the dialectic of film production and links them with Marx’s well-known statements on culture and art. She analyses, for example, his statements on taking photographs and the similarity of the ideological image of the world to the vision in an ancient camera obscura (45-6). Importantly, she emphasises the concentration of historical materialism on the quota of social formations, which also seems to apply to cultural products such as film. The narrative in the book is conducted in such a way that people who are proficient in Marxism can learn something about film studies, while film scholars can learn a lot about Marxist philosophy.
The final fragments of the first part of the book first appears to be the most interesting. There, Kornbluch juxtaposes Marxist film theory with the dominant trends in film studies. She criticised ‘auterism’ – a position assuming that film work is an epiphenomenon of its author’s awareness and genius, and New Historicism, derived from Michel Foucault’s tradition of research on power relations. Kornbluh notes some similarities between the Marxist and the Foucauldian school, but immediately afterwards she accurately points out the latter’s shortcomings claiming, “a new historicist reading of film limits itself to analysis of particular, to the exclusion of theorising about and with film” (67). Despite the infatuation of many on the left with Foucault, Kornbluh rightly stands in opposition to his philosophy, which, according to some contemporary critics, by its focus on particularisms may have been close to the ideology the neoliberal order. For similar reasons, the author rejects auterism as an approach focused on individuality. She shows in various ways that Marxism has a definite advantage in this field because: “Marxists regard the complex social field as simplified by the capitalist whole; interpreting from the point of view of this whole intensive means counterbalancing the particulars of historical circumstances with the generalities of historical tendencies” (66). In other words, the author argues that Marxism of all the theories provides an opportunity for the most comprehensive study of film as opposed to other trends.

While the final chapters of the first part of this book are focused on the Marxist film expert’s workshop, the next part is devoted exclusively to the film Fight Club. This section reflects well the complexity of Marxist film theory as a lens that differs it from one-sided reviews in typical movie journalism. It is often the case that not only bourgeois publicists but also leftist amateur film critics analyse the well-known products of pop culture on the Internet. However, their methodology tends to boil down to an analysis of dialogues of characters and their particular, individual actions. On this basis critics are judging political and economic relations in a given film, and evaluate it as “progressive” or “reactionary.” In this way particular film threads are marked as revolutionary, conservative, feminist, nationalist, etc. In a result many leftist journalists are producing one-sided analyses of popular productions such as Game of Thrones for example, and advertise their reviews as “Marxist analysis” of particular movie or television series. Instead, Kornbluh’s book convincingly shows the advantage of Marxist film theory, which is that it focuses on film form allowing one to reflect on the film in practically all its aspects including its conditions of production. It takes into account both the economic conditions of film production and analysing the film itself from both its technological and ideological aspects. Thus, the author shows how professional Marxist film analysis differs from amateur interpretations stating:

“Rather than try to decide what side of the class war a particular film is on, we can instead emphasise the process of situated interpretation as itself a social practice, connected to other practices like consumption and struggle, but most importantly, ongoing in time. Interpretations do not get finished, because the context of interpretation keeps evolving” (83).

In the author’s vision, film studies should, therefore, focus on the contingency of the film work and the temporality of their current interpretations looking to the work of Frederick Jameson as a model for her Marxist approach to film.

The richness of Marxist film theory is revealed by the author’s own analysis of Fight Club. Using examples from the film, the author shows and justifies the applicability of all the categories, concepts and other elements of Marxist film theory she mentioned earlier. Although she refers to both Jameson and Żiżek, her analysis is entirely original and directly anchored in Marx’s thought and his remarks on dialectics and form. As it was indicated above, Kornbluh does not make final judgments about the “class nature” of Fight Club. However, she is looking deeply for the wealth of contradictions of capitalist production the film highlights, as well as the contradictions of the film itself, starting with the fundamental contradictions of the film as a product of capitalist entertainment – a box office Hollywood film with high-grade actors, poorly paid scriptwriters, which carries subversive content in theory (106). The film’s promotional campaign, the director’s intentions, and conflict with the producers, as well as the fate of the film in its DVD version are all considered, while on the following pages, we are dealing with a multifaceted analysis of the film plot. Here Kornbluh equally takes into account acting, the events taking place during the action, the way of shooting, the narration, as well as the editing, the work of the camera and other technical aspects, which, as she convincingly proves, have a significant influence on the interpretation of individual scenes in this picture.

In this way, Kornbluh goes far beyond the aspects that can be intuitively performed by an average Fight Club viewer. Yes, like others, she emphasises that the main character is a typical example of ‘white-collar,’ describing that the character seems to be affected by the alienation of life in capitalism. After experience of a dissociation of his personality and, through his alter ego, he creates a quasi-anticapitalist group of subversives, who are going from self-destruction to destruction of the financial centre of the system. Above all, however, Kornbluh undermines popular myths about Fight Club, whose critics focused on particular factors. The most popular critics say that Fight Club is a proto-fascist film: “because it depicts a long sequence of a populist insurgency with intense libidinal investment in a charismatic leader”. (101) and anti-feminist, because the dialogues in the film mock the characters. The author refutes these interpretations focusing not on what the characters in the film say, but what they do placing emphasis on the class conflict between white-collar workers and blue-collar workers outlined in the plot of the film. What is more interesting however, is her attention to the whole model of production created by a subversive group led by the main character of the story. Although the cinematic Project Mayhem looks like an exclusive group of men focused on nihilistic violence, the author convincingly proves that in reality the action of the film shows that their goal is to create a new mode of production. She claims this frame is feminist by nature. No matter that the group is made up of men. It is crucial that the whole “revolutionary” process begins with a typically feminine domestic work. This kind of work gave foundation for the more complex production forms undertaken by the characters in the film (122). The author shows that the leitmotiv of the film is social reproduction, which is the basis of every model of production (123). It also takes into account the work of the camera and the sound background, which emphasises the “dark” character of the capitalist mode of production. The activities that seem to be self-destructive in the film are interpreted as creative destruction. Kornbluh convincingly argues that the main character’s self-destruction allows him to free himself from the fetters of alienation and take collective action to deal with the trauma of life in capitalism. It is on this basis that the film reflects how “personality disorder is not developed due to an individual trauma, like an abusive childhood, but the diffuse systematic catastrophe of working in the insurance industry” (133). She shows in other examples that self-destruction is a political act and it is in this way that physic and social transformation are interlinked in the film (136).

These are just a few of the most striking examples, from the rich, seventy-three-page analysis of Fight Club. The author also formulates several remarks relating to editing and how the film shows the ideology of cinema as such through selected scenes and shots. Nevertheless, Kornbluh is far from formulating enthusiastic assessments, noting aptly that after the film was broadcast, underground boxing clubs started forming, however these were not circles of people struggling for better access to social services. But from other hand she shows that historical events of recent years, such as the financial crisis, actualized problems highlighted in the film and created specific “cult” around it. I will not reveal more detail from the content of the book, as it is worthwhile for the reader to discover for themselves the richness of Marxist film theory explored in the book.