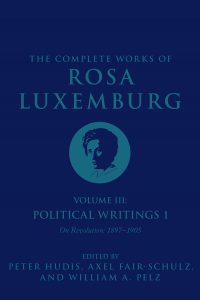 The volume of the Complete Works of Rosa Luxemburg’s writings includes her political works on revolution between 1897-1905. Vol. III is the first of 3 volumes in the third rubric of the series, ‘On Revolution’. This volume basically contains her writings and reports for journals and newspapers, especially on the 1905 Russian Revolution.

Luxemburg writes her works in different languages, such as German, Polish, Russian and Yiddish. Some of them are published with her signature and some under pseudonyms or anonymously. With the appearance of this volume, Luxemburg ensures us an idea of revolution which is always at the core of all her writings from the political to economic. The basic questions of this volume are what revolution refers to and why it is so important. Moreover, questions of strategies or tactics are discussed around different topics. These works written in different languages not only aim to advance the existing revolutionary movement, particularly in 1905 Poland and Russia, but also to demonstrate what kind of methods are necessary for social, political and economic transformations.

The anti-authoritarianism and the demand of democracy against absolutism penetrates these early writings of Luxemburg. Following Marx, Luxemburg’s support for (revolutionary) democracy as an anti-authoritarian view continues to be relevant. This volume may open a fresh discussion on Luxemburg’s thought and provides a new source for left-wing politics. In Russian Parties Controversies (1905) as a problem of strategy, she presents her concern about the fiction in the Russian party of Mensheviks and Bolsheviks (172). Against this division (1903) among the Russian party, she insists that they belong together because they have the same program and the same tactics (172-73). Although she considers this split as ‘a fact of life’ (173), her fear is that this split creates a division among the workers.

The idea of split among workers is dominant all of her writings from early to later. In this regard, her idea of autonomy of a nation is worth mentioning because from the early writings she underlines the conciliation of the Russian and Polish working-class against the idea of the self-determination of a nation. Luxemburg criticizes those who would demand autonomy in Poland. According to her, without a demand for the republic in Russia as a socialist program, the idea of autonomy does not make sense and is absurd (143). The class struggle in Poland can only exist in the spirit of class solidarity. This solidarity and the freedom of Poland is only possible side by side the Russian working class (339). Her idea about the right self-determination remains always in contradiction with Lenin’s idea of the autonomy of a nation. Even though her 1905 polemics with Lenin find a middle ground, in 1908-9 with Luxemburg’s article on the National Question and Autonomy and in 1911 with the polemic on the split between Mensheviks and Bolsheviks (Luxemburg 2004a), the conflict between two re-appears.

Luxemburg conflicts with Lenin over the category of revolution, a category which includes some important elements such as spontaneity, the role of party and the self-emancipation of a nation. As is known, Luxemburg discussed with Lenin particularly between 1903 and 1904. In her polemics with Lenin, Luxemburg disagreed on the national question, the concept of the party body and the mass and mass actions, all issues that can be found in this volume. Lenin, in his famous 1902 work What is To Be Done?, attacks the view of spontaneity as bourgeois ideology (Lenin 1961: 384). He accuses Luxemburg for conceptualizing working-class political struggle in terms of spontaneity. Luxemburg in turn attacks him for his ‘hierarchical elitism.’ While Lenin considered Luxemburg as having misunderstood him in particular terms of the organization and centralization of the party, Lenin still regarded Luxemburg as a great revolutionary thinker of the era.

Independently of her conflict with Lenin, another important subject discussed by Luxemburg in this volume is the woman question. In the modern sense of the term, Luxemburg is not a feminist but is always interested in the women question. In this regard, Heidi I. Hartmann helpfully differentiates the idea of feminism from the woman question: ‘The “woman question” has never been the “feminist question.” The feminist question is directed at the causes of sexual inequality between women and men, of male dominance over women. Most Marxist analyses of women’s position take as their question the relationship of women to the economic system, rather than that of women to men, apparently assuming the latter will be explained in their discussion of the former’ (Hartmann 1979: 2).

Luxemburg is interested in the woman question within her theory of the oppressed, of freedom and consciousness, hierarchy and anti-authoritarianism (Aznar 2015: 243). She is always combatting with the patriarchal system or men’s mentality, in particular her contemporaneous comrades’ patriarchal mentality. Thus, she claims that women can be as successful as men in the battlefield during the struggle. She underlines the equality between men and women in politics. This political demand is not rooted in the antagonism between man and woman. The struggle for women’s right can be defended by proletarian methods and struggle. Luxemburg takes the women question in consideration with her idea of universalism. A dialectical relationship between the universal and individual or particular helps explain her approach to the women question along with the national question. Women as particular or individual find their liberty and emancipation in the universal struggle of working-class. Yet it is also worth noting that in some of her later writings, Luxemburg defends and fights for women’s suffrage and in her 1914 Proletarian Women, she highlights the struggle of proletarian women all around the world against colonialist and capitalist exploitation (Luxemburg 2004b).

As we can see, the fundamental concern or interest of these early writings is the revolutionary tactic, strategy or method. She therefore argues different topics, from the woman question to terrorism, in relation to tactics. In this regard, another important problem Luxemburg mentions relates particularly to our own age: terror and terrorism in relation to the importance of party organization. In The Russian Terrorist Trial, published in 1904 in Vorwärts, terrorism is related to the existence of tsarist absolutism. For Luxemburg, the basic question is not what terrorism is but why terrorism exists. Individual terrorist activities exist and will continue to exist because ‘absolutism in Russia produces spontaneous terror, in a manner identical to how the bourgeoisie’s class hegemony in Western Europe produces anarchy’ (22). According to her analysis of the terrorist attacks, the oppression of people within tsarist absolutism creates its opposite, that is, terrorism. She writes that ‘we must say that the rise of terrorism in Russia is always a sign of the revolutionary movement’s weakness, even if this sounds paradoxical’ (21).

Terrorist acts have a ‘paralyzing effect rather than arousing action’ (94) and awakens vague hopes and expectations of people who might end up relying on the ‘miracle-working invisible arm of the terrorist “avengers”’ (ibid). Luxemburg’s writings on terrorism point towards a common approach also to be found in Lenin: the importance of political struggle through an organization, a political party or organ. This can be seen in each of their criticism of Blanquisim (Lenin 1972: 339-40; Luxemburg 1903), which believes in conspiracy as a political method and desires immediate revolutionary transformation. Luxemburg suggests struggle in a political, social and democratic manner, but as an individualistic exercise. Only a fully class-conscious and powerful people’s movement can prevail against terrorism (21). Once more, her theory of (class) consciousness appears as a basic element of struggle and history.

Lenin and Luxemburg agree on the way to acquire class consciousness and training through praxis. From these early writings, and from Lenin’s criticism of her understanding of spontaneity, we find two different modes of the formation of working class consciousness: 1.) Luxemburg’s spontaneity and 2.) Lenin’s systematic and organizational priority of education through ‘enlightened workers and from among the intellectuals’ (Lenin 1961: 500). Through these writings and reports, Luxemburg defends and strengthens her view on the education of masses in relation to their self-consciousness and spontaneous activity.

It is within this discussion that we discover Luxemburg’s idea of historicism. Here, consciousness plays a historical and processual role. Thus, while history for Luxemburg is a process of self-consciousness through economic and political struggles, it is also determined by a very significant and prominent stage of consciousness. History becomes here a means for the realization of freedom. While Luxemburg refers to a particular historical situation, by no means does she does she subscribe to fatalism. Rather, history decides and determines what is coming as a result of human initiatives and activities. History is a crucial element of rational determination and consciousness is a basic component of working class struggle. In this regard, her historicism is similar to that of Hegel. However, the spirit of history is the activities of the working class itself and so her historicism would in fact be closer to Marx. Such is the case that after analyzing and examining her writings in this volume, her conception of history or her historicism, oscillating between – or more precisely combining – Hegel’s consciousness and Marx’s proletarian struggle, can be rediscovered.

In sum, the debates found in Luxemburg’s writings in this volume refer especially to the concept of freedom and consciousness in relation to the concept of history, or more precisely to her historicism. These ideas are at the heart of her ideas on revolution, terror, censorship, women, etc. The revolutionary movement based on the class consciousness of the proletariat leads freedom itself (63). While for Luxemburg the particular character of revolution is to be a spontaneous–conscious movement, this does not mean that a revolutionary movement ought to be blind and without leadership.

On the whole, the volume gives the impression of a continuity between her early and later writings. Certainly the reports and observations within the volume surrounding the concept of revolution pave the way for Luxemburg’s intellectual development. Undoubtedly these writings together with the forthcoming volumes will expand on these ideas of revolution and history.