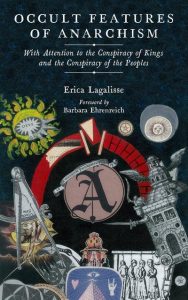 Erica Lagalisse’s Occult Features of Anarchism: An Initial Treatise on the Liberatory Cosmology of Western Anarchism, The Relation of Socialism and Pantheism & The Hermetic Tradition in Modern Politics (attending to both the Conspiracy of Kings & Conspiracy of the Peoples) With Relevance to Current Struggles Against Tyranny And Practical Challenges of Coalition Politics in the 21st Century is, needless to say, worthy of plaudits for its subtitle alone. Part academic monograph, part political intervention, Lagalisse pursues two distinct, but related, themes in the book. On the one hand, Lagalisse embarks on a historical enquiry into the ‘hidden correspondences between classical anarchism, Renaissance magic, and occult philosophy’ (11). On the other, Lagalisse takes up the question of ‘conspiracy theory’, noting the increasingly common presence of the phrase in contemporary political discourse while exploring its epistemological value and the power claims bound up with its pejorative usage.

An anthropologist by training and an activist in anarchist politics, the research Lagalisse presents in the book has its origins in her personal experience as a political activist. The historical section of the book, which comprises its first eight chapters – forming by far the larger part of its contents – was stimulated, she explains, by the gender bias and uncritical atheism Lagalisse encountered among anarchists in a Zapatista collective in her native Montréal. In the intellectual genealogy of anarchism she furnishes, these two themes – gender and religion – are combined. Their respective histories are shown to be, in part, entwined.

Lagalisse argues that modern anarchism developed on the basis of ‘overlapping syncretic pagan cosmologies that behold the immanence of the divine’ (18). More specifically, she identifies the Corpus Hermeticum – a collection of texts written in the first or second centuries A.D. and rediscovered during the Renaissance, which impart the mystical insights of ancient Egypt – as ‘a fount of modern left politics’ (20). Lagalisse seeks to show how the Hermetica ‘was fundamental to the emergence’ of Freemasonry and the various revolutionary brotherhoods of the eighteenth and nineteenth centuries such as the Illuminati, ‘the Charbonnerie and Carbonari, the Mazzinians and le Monde’, which served as seedbeds for subsequent radical movements (36, 48). Lagalisse avers that the influence of the Hermetica also continued to impress itself on antiauthoritarian movements through the figures of Spinoza and Hegel, who were both, she suggests, in some way indebted to it. Attending to the question of gender, Lagalisse argues that, as magic was beginning to gain intellectual traction in the early modern period, women practicing it were persecuted as witches; according to Lagalisse, women were the subject of a ‘gendered class war’, purged from the public sphere, and kept henceforth in a position of subordination in both society at large and among radical groups like the Freemasons (30).

Occult Features of Anarchism is a consistently thought-provoking book, replete with interesting insights. Lagalisse adroitly documents, for example, the Illuminism in the International Workingmen’s Association. She shows how many of the IWMA’s members had a background in Freemasonry and how this shaped the new movement in subtle and significant ways. Most interesting of all perhaps, Lagalisse skilfully reveals the Masonic origins of communist and anarchist symbolism, including the red star and the circle-A; she illuminates the link between ‘the (neo)pagan May Day celebration and today’s anarchist May Day marches’; and she sheds light, similarly, on the ‘pantheistic revolutionism’ espoused by the young Bakunin (54, 55). Yet, despite its many merits, the historical analysis Lagalisse provides in the book is not always convincing.

Certainly, Occult Features of Anarchism deserves some latitude in this regard, since Lagalisse tackles a large, unwieldy topic and does not profess to offer conclusive answers. However, in numerous instances the case for intellectual influence she posits seems less plausible than one of simple affinity. The evidence furnished, for instance, for Hegel’s familiarity with the Hermetica does not yield the certainty that Lagalisse claims for it. Indeed, there is, throughout the book, a tendency to generalise, overstate certain arguments, and trade in essentialist language. Thus, rather than simply noting the demonstrable relationship between ‘utopian socialism, anarchism, and Marxism’ and the ‘syncretic cosmology’ she reconstructs, Lagalisse makes the former ‘rely’ on the latter, and terms such as ‘the European historian’, ‘the anarchist person’, and ‘working people’ are deployed without inhibition in the text, overlooking the immense diversity which inheres in such categories (18, 29, 86, 94).

Due to the ambition of Lagalisse’s imaginative and compelling research, detail is also often sacrificed to chronological scope, resulting in various casualties – Herbert Spencer, for instance, is presented as a Hobbesian as opposed to a one-time proponent of altruism; and the publication of the first English translation of the Communist Manifesto is assigned to the president of the Association of American Spiritualists in 1872, when in fact the Chartist journal, The Red Republican, published Helen Macfarlane’s translation in 1850. More seriously, the interpretation of Marx Lagalisse advances is somewhat flawed. For example, Marx, she suggests, ‘believed that democracy was the motive force of history’, but this was clearly technology and, in turn, class struggle (67). Similarly, Lagalisse claims that, for Marx, ‘the essence of the state was democracy itself’, whereas the conventional view, certainly, is that Marx viewed the state as an instrument of class rule (67). Finally, before concluding that the ‘world did not need to be “disenchanted” before modern antiauthoritarianism could occur’, but had rather to be ‘reenchanted’, Lagalisse might have distinguished more clearly between the occult philosophy cleaved to by some anarchists and socialists and the secularised religions also adopted at that time – varieties, most frequently, of the Comtian religion of humanity – for there was little reenchantment in the latter (74).

These criticisms are by no means destructive of Occult Features of Anarchism’s central historical thesis – the argument, namely, that antiauthoritarianism has ‘a particular theological thread’ running through it (17). On the contrary, they merely call for greater nuance in its exposition. But this need for more precision applies to some of its more explicitly political content too. The most significant omission here is postanarchism, for postanarchism neither insists ‘on a disenchanted universe’ nor does it adopt the strictly vertical model of oppressive power focused on the state that Lagalisse assigns to Western anarchism tout court (75). Nonetheless, for this reviewer at least, the real strength of the book resides precisely in its normative political analysis.

Just as the first section of Lagalisse’s book had its origins in activism, so with its concluding section on ‘conspiracy theory’. Lagalisse judged that, on account of the widely circulated theory of global power involving Freemasons and the Illuminati, which transforms the latter into contemporary equivalents of ‘their historical adversary, the Holy Alliance’, ‘it might be politically useful to clarify the record on these topics’ (11, 9). More interestingly, though, on the basis of her experience as an activist, Lagalisse discerned how the phrase ‘conspiracy theory’ ‘has come to function as a euphemism justifying class exclusion’ in radical politics (101). On a more general level, the phrase, she rightly avers, is ‘used specifically to refer to popular (subaltern) ideas for the purpose of disqualifying them from respectable consideration’ (90). To be a ‘conspiricist’, on the conventional view, is to lack rationality. Yet history abounds in conspiracy – one need only mention Watergate, Project MKULTRA, and Operation Northwood, to name some prominent North American examples. Making exceptions for its wilder, David Ickean varieties, Lagalisse thus encourages us to consider if the subaltern conspiricist might actually sometimes ‘be offering positioned insight’ (102). With resounding insight of her own, Lagalisse suggests that ‘only to the elite observer should it be surprising that persons in oppressed groups find the activity of dominant groups “suffused with intentionality” that elites cannot see’ (102).

It is certainly possible to quibble with aspects of Lagalisse’s analysis. Her resistance, for example, to providing a definition for conspiracy theory is misguided. It is perfectly reasonable to use the term – defined, say, in Cass R. Sunstein and Adrian Vermeule’s formulation, as ‘an effort to explain some event or practice by reference to the machinations of powerful people, who attempt to conceal their role’ – in a non-pejorative way (Sunstein and Vermeule 2009, 205). A conspiracy theory does not cease to be a conspiracy theory because it is true. Lagalisse might also have stressed the distinction between justification and truth, that is, the grounds upon which one might legitimately hold a conspiratorial view and its essential falsity. It does seem, however, that in claiming that ‘theories of “conspiracy” are rapidly dismissed by intellectual elites precisely because they uncomfortably highlight disavowed agency among persons of the professional class’, Lagalisse is on firm ground. Within reason, her conclusion – reminiscent of Lenin’s pithy reflection on politics, ‘Who whom?’ – is apposite: ‘There is no politics without conspiracy. The question is simply “who” is conspiring to do “what.”’ (103).

Lagalisse offers similarly astute appraisals of concepts such as ‘cultural appropriation’ and ‘intersectionality’, where she warns against ‘applying the logic of property to culture’ and detects, with the help of Pierre Bourdieu’s multifaceted notion of capital – economic, cultural, social, and symbolic – ‘class power’ being ‘laundered as “good politics”’ (76, 99). But it is, above all, her rejection of the vulgar Popperian theory of conspiracy theory and her sociological take on its popularity which impress most.

Occult Features of Anarchism is an idiosyncratic book, not without flaws. But – with or without its subtitle – it is a triumph. It constitutes a valuable contribution to both the growing literature on anarchism and religion and the literature on conspiracy theory.