Marx & Philosophy Review of BooksReviews‘Karl Marx and the Birth of Modern Society: The Life of Marx and the Development of His Work (Volume I: 1818-1841)’ by Michael Heinrich reviewed by Chris Byron 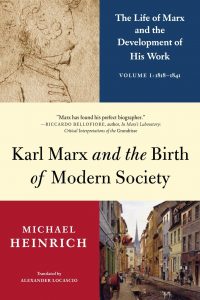 Michael Heinrich
Karl Marx and the Birth of Modern Society: The Life of Marx and the Development of His Work (Volume I: 1818-1841)

Michael Heinrich opens the first volume of his biography on Marx and the modern society he grew up in by noting that ‘Marx probably would not have wanted a biography, and certainly not one planned for multiple volumes’ (9). Seeing as Marx did not desire a personal biography, and that dozens already exist, Heinrich’s project raises the question: why write this book at all? While this review will diverge from the ubiquitous praise being offered elsewhere and offer some slightly critical commentary, it can confidently be said that Heinrich’s completed biographical series will easily eclipse previous Marx biographies. In fact, it is doubtful that the problems outlined below will reemerge in subsequent volumes.

Heinrich offers three justifications for writing a new Marx biography, noting that unlike other biographies, his ‘is concerned with the historical process in which Karl Marx developed as a person, as a theorist, as a political activist, and as a revolutionary’ (ibid).

The first justification Heinrich offers is that too many Marx biographies are character driven, attempting to distill Marx the man, and what it would be like to spend an evening with him drinking liquor and pontificating about revolution. Heinrich believes this is a foolhardy project, especially given the gaps in documentations that may allow for a more robust picture of Marx’s character.

His second justification is that past biographies do not take into account Marx’s life and thought ‘in equal measure’ (25). That is, other biographies overemphasize either Marx’s life or thought. Heinrich’s claim accurately depicts two other Marx biographies, namely Francis Wheen’s overemphasis on Marx’s character, at the cost of theoretical development, and Sven-Eric Liedman’s overemphasis on theory, although done quite well, at the cost of character. Wheen’s biography, among many others, is routinely criticized throughout Heinrich’s footnotes, and the criticisms consistently register as cogent.

The final justification Heinrich offers is that he intends to properly detail the works and life of Marx by portraying the ‘historical context’ in which Marx lived (29). These three justifications coupled with Heinrich’s introduction make it clear that depicting the ‘birth of Modern society’ is intended to justify a new Marx biography. Detailing modern society allows Heinrich to bridge the gap between Marx’s life and thought. Moreover, since Marx was a theorist of modern society, Heinrich’s detailing the context as an objective narrative component dovetails nicely with Marx’s aim to critically theorize modern society as a new social-phenomenon requiring scrutiny. This opening gambit – to place Marx within the historical context of modern society and its development – is what simultaneously hinders and emboldens Heinrich’s first volume.

The book contains three chapters, each taking up a third of the book. Since archival documentation of Marx’s early life is miniscule, one would think that the first chapter titled ‘Forgotten Youth: 1818-1835’ would be quite short. Instead, it’s just as long as the two subsequent chapters. Three pages of chapter one detail what Heinrich can derive about Marx’s youth (not much), and the remaining pages focus almost exclusively on Marx’s family, their lineage and the surrounding political and religious landscape. Thus, the first third of Heinrich’s Marx biography has nearly nothing to do with Marx, bending the stick, it can be argued, too far in the narrative of modern society. It may be doubted that many academics, scholars and individuals interested in Marx’s life really desire such an extensive summary of Marx’s father, and his familial relations. That said, Heinrich does break new ground in depicting Marx’s relationship to his father. Furthermore, whereas past biographies were too quick to believe Marx’s mother was a dullard, Heinrich notes the evidence that such claims are wanting. Heinrich routinely does a great job of showing how many commonplace claims about Marx are dubious (e.g. that Marx engaged in a pistol duel, was too egotistical for familial concerns, that his Jewish background might engender self-loathing, or that the Westphalens considered the Marx’s beneath their station).

Chapter two details Marx’s life from 1835-1838, when he attended university, and chapter three focuses on Marx’s intellectual developments from 1838-1841, ending with a twenty-page summary of Marx’s doctoral dissertation.

It can be suspected these are the two chapters by which readers will be most rewarded, especially chapter three. Yet similar to the first, there remains an overemphasis on modern society and historical context, at the cost of Marx biographizing. Frankly, it isn’t until the final thirty or so pages detailing Marx’s dissertation that Marx’s thought – distinct from his life – was touched upon with unique insight and detail. However, one will learn intimate details about the political, religious and educational landscape of nineteenth century Berlin. Hegel and his colleagues are remarkably detailed both in their thought and political lives. Moreover, the common theorists associated with the young Marx, such as Bruno Bauer, Arnold Ruge and Ludwig Feuerbach, are given excellent early treatment in the volume.

Most Marx scholars associate Marx with the ‘young’ Hegelians and/or ‘left’ Hegelians, believing Marx and his comrades developed a leftward assault against the ‘old’ and more conservative ‘right’ Hegelians. Scholars often perceive this young-left versus old-right paradigm as focused on the political aspects of Hegel’s thought. Heinrich contends otherwise. Although there are plenty of family resemblances among those theorists occupying either the left or rightward Hegelian trend, Heinrich nevertheless shows that there are no clear criteria for determining who belongs where.

Heinrich argues that this old-right versus young-left historical dichotomy is a product of twentieth century scholarship and not an accurate reflection of the actual historical context in which Hegelian battles were being waged both concretely through civil appointments, and in the ethereal air of theory. Moreover, much of the confusion surrounding Hegelian positioning is due to the fact that few scholars realized that religion was politics in nineteenth century Germany. In a society without a stark state-church separation, being publicly secular was a political act that was often met with state persecution. Relatedly, being pious and patriotic often entailed good civil appointments.

Heinrich demonstrates that theology is the primary focus of Marx and his critical colleagues. Their rebukes of modern society focus on religion. Heinrich goes into extensive detail about what Marx was probably reading and researching between 1835-41, concluding that contrary to common wisdom Marx had an early and persistent interest in theology: ‘from the beginning of 1840 until the spring of 1842, Marx had planned at least five publications concerning the philosophy of religion’ (288). The young Marx wrote religiously themed poems and read many theological works. Although ‘Marx’s studies in the philosophy of religion were not reflected in independent publications, they did not remain without effect. In all of Marx’s work, in particular in Capital, there are numerous quotations and allusions to the Bible as well as reference to theological topics’ (ibid). That religious themes percolate throughout Marx’s writing ‘is due to the studies in the philosophy of religion that Marx conducted between 1838-1842’ (ibid).

Many scholars have failed to notice Marx’s intimate knowledge of theology and the degree to which this knowledge is contained in the totality of his mature critical works. Heinrich is a welcome exception. Norman Geras once argued that ‘theological niceties’ were not an actual part of Marx’s theory of fetishization and reification, and that Marx’s references to religion were ‘inexact’ analogies (Geras 1986: 59). Geras’s view was taken up by many other scholars (Sayer 1979: 67; Callinicos 2014: 148; Bhasker 1979: 57). Yet it can be argued upon a close reading that Marx suggests capital to have replaced a former organizational conception of God. Marx argued that the ‘power of Egyptian and Asiatic kings and priests or the Etruscan theocrats in the ancient world has in bourgeoise society passed to capital’ (Marx & Engels 1975: 260). Capital itself is the God of modernity. Generating surplus value is a form of genuflection, and defending capitalist social relations is shoddy apologetics. Marx’s goal was to exorcise the religion of capitalism: ‘The religious reflections of the real world can, in any case, vanish only when the practical relations of everyday life between man and man, and man and nature, generally present themselves to him in a transparent and rational form’ (Marx 1990: 173). Heinrich’s biography, with its emphasis on religious critique as political critique, is excellent in fortifying this long-overlooked Marxian point.

Given that Heinrich’s analysis of Marx’s life and thought really picks up where archival documentation of Marx’s life and thought exists, and that subsequent volumes will rely on periods in Marx’s life where such documentation exists in greater detail, any aforementioned grievances about this volume are entirely irradiated in the expectations of future installments. Also, Heinrich has indicated that the future volumes will be longer. The slight feeling of having overpaid for a Marx biography that contained very little Marx biography will expectedly cease hereafter. When Heinrich is finished, these volumes will stand as the quintessential Marx biography. Future volumes will undoubtedly elicit excitement, and this reviewer is elated that Marx’s relationship to religion and theology may finally become a staple of theoretical Marxist discussions.