Marx & Philosophy Review of BooksReviews‘Marx Worldwide: On the Development of the International Discourse on Marx since 1965’ by Jan Hoff reviewed by Richard Westra 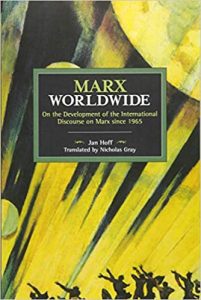 Jan Hoff
Marx Worldwide: On the Development of the International Discourse on Marx since 1965

Richard Westra is University Professor at the Institute for Political Science, University of Opole, …

Jan Hoff’s Marx Worldwide provides a masterful examination of development trends in Marx studies from the 1960s to present. There is no other book I am aware of which covers its ground in terms of breadth and overcoming of language barriers; the latter in particular has acted as a huge impediment to circulation of innovative thinking in Marxism – sometimes blocking its spread for decades allowing theorizations to be inadvertently heralded as original in one linguistic region when, in fact, their problematic had initially been explored much earlier in another.

Hoff’s treatment of developments in Marxism may be divided for purposes of this review into two intersecting discussion domains, geospatial and thematic. Both are contextualized in the opening chapter by the way Marx debate was pried from the controlling hands of worldwide communist parties beholden to Moscow and Stalin. In thematic terms such prying entailed liberating the notion of theory and practice in Marxism where theory constituted Stalinist vulgarized historical materialism as a determinist creed and practice the alleged proof of that creed in socialist policy of the Soviet Union to be slavishly imbibed across the communist international. Theory, as Hoff recounts, assumed a broader definition which began to consider Marx’s critique of political economy in Capital and the Grundrisse. Practice was turned towards new forms of class struggle including that of radical Marxist student movements mentored by academics initially associated with Soviet directed communist parties but who began to follow alternative intellectual courses such as the figure of Louis Althusser. In the geospatial context Hoff follows the efforts of socialists in Europe, Britain, Latin America and Asia in carving out new modalities of socialist practice.

The arrival of Marxism at an alleged crisis crossroads, as Hoff explains, was captured in the Anglo speaking world by writings of British Marxist Perry Anderson in his widely read Considerations on Western Marxism, published in the mid-1970s and followed up in the next decade In the Tracks of Historical Materialism. In these Anderson suggested Anglo thought on Marxism was exerting a gravitational pull on the field to become its new focal point. Yet for Hoff, both Anderson’s claim of Britain as the center of Marxian thought and that of Marxism in crisis were vastly overstated and ignored precisely when that fecund global flowering of Marxian discourse that his book elaborates upon. After all, Marx’s pithy theory of historical materialism is made up of but a few paragraphs. And its vulgar version which fell into crisis, where theory is supposedly verified by a close connection between activities of socialist parties or movements and its precepts amounted to the crudest empiricism and was unbecoming of a genius like Marx in any case. Further, debates surrounding historical materialism are hardly exhaustive of discourses on Marx’s research program. Capital, Volume one, in fact, was Marx’s opus published in his lifetime and fecund expositions of its analysis of the capitalist mode of production were being undertaken around the world, in Japan in particular, during the time Marxism qua historical materialism was purportedly beset by crisis as discovery and translations of the Grundrisse and successive unpublished drafts of Capital were sparking intense Marxist interest in Europe and the world well beyond its Anglo regions.

Indeed, the bulk of Hoff’s writing is absorbed by his geospatial exploration of key thematic engagements with Marx’s critique of political economy as covered by the foregoing as well as manuscripts of the early 1860s, subsequently published as Theories of Surplus Value. The thematic engagements and their geospatial debate include questions of the ‘object’ and ‘method’ of Marx’s theorizations, that of a potential ‘break’ in Marx’s thinking from his ‘young’ period of thought to a ‘mature’ Marx, issues of the distinction Marx makes in Capital and the critique of political economy between a logic of ‘inquiry’ and logic of ‘exposition’, debates over value theory and ‘value form’, the relation between Marx and Hegel and the dialectic as manifested in Capital and, finally, the question of an unconsummated ‘six-volume plan’ of Capital.

Rather than offering woefully thin treatments of Hoff’s complex discussions of each theme what follows will take up the interrelated questions of Marx’s object and method in his critique of political economy and how this foregrounds debates over value theory and that of the distinction between mode of discovery and exposition or ‘presentation’ in Marx’s Capital. Though even here, readers be warned, it is not possible to deal fully with Hoff’s deep probing of global positions on these topics.

Questions of object and method in Marx studies are often associated with Althusser’s attempt to define Marx’s ‘theoretical object’ as part of Althusser’s upholding of Marx’s Capital as a founding work of a new science in his echoing of Marx’s own words. Whereas for Althusser, the new science purportedly established by Marx was a renewed version of historical materialism, around the world vastly divergent analysis were proceeding which accepted Capital as a project in its own right with the study of the capitalist mode of production as its object. Already in 1950s Japan, as Hoff puts it, the ‘Capital-exegesis […] of theoretical Stalinism [interpreting] Marx’s main work as providing proof of a historical inevitability […] of the transition from capitalism to dictatorship of the proletariat’ (20) was being denounced as a travesty of Marx’s thought. Writings by Japanese Marxian economist Kozo Uno, in particular, emphasized how economic laws formulated by Marx in Capital to explain the inner logical operations of the capitalist mode of production would never have been advanced as ‘laws’ by Marx if they were self-defeating.

Through the 1970s, 1980s and 1990s, and bolstered in the 1980s by Die Marx-Engels-Gesamtausgabe (MEGA) project, which incidentally benefitted from East German (and later German) and Japanese cooperation in producing the most comprehensive collection of Marx-Engels writings (a full one fifth of its print edition being sold in Japan) Hoff notes (113), saw debates over Marx’s object and method morph into those on value theory in Capital and to prompt interventions from international scholarship, for example: Latin America (Enrique Dussel, who developed extensive commentaries on all four drafts of Capital; ‘no equivalent work’ of which, Hoff declares pace Anderson (198), ‘has ever been undertaken within the Anglo-Saxon world’); Iran (Ali Shamsavari); India (Jarius Banaji); Thailand (Pichit Likitkijsomboon); Vietnam (Trai Han Hac); Poland (Marek Siemek); France (Jacques Bidet) to indicate but several.

Issues within value theorization which are explored, as highlighted by Hoff, include its status vis-à-vis ‘classical’ political economy as an approach to economic phenomena from a ‘qualitative’ rather than merely quantitative perspective, the virtually unanimous global debunking of a purported ‘logico-historical’ method in Marx’s opus claiming it tracks capitalist development out of a so-called ‘petty-commodity’ precursor, the question of ‘fetishism’ introduced by Marx in his discussion of the commodity and the role this concept plays in the wider project of critique of political economy, and the part dialectical epistemology plays in the ordering of categories and ultimate scope of Capital. As elaborated by Hoff, this issue draws into debate Marxists such as Michael Heinrich of Germany, Chris Arthur of Britain and Kozo Uno in Japan.

However, not completely laid bare to the extent I believe it warrants is Hoff’s examining of the distinction between what Marx refers to as his logic of discovery and that of presentation. To be sure, Hoff does review the worldwide treatments of the debate here including important writing by Dussel adverted to above, as does Hoff begin to address the connection between answers to this question and stances in debate themes itemized above, including the place of Hegel in Marx’s theorizations, the unconsummated ‘plan’ of Capital, a potential ‘break’ in Marx’s thinking and so on. But what emerges from Hoff’s explorations is the way detailed textual excavations of Marx’s corpus, including the MEGA for hidden hints by Marx relating to his intentions prior to actually writing Capital, combined with epistemological issues in value-form discussion.

Yet, it is precisely here where Marx demonstrates an uncanny prescience that could have been felicitously corroborated by some discussion of frontier debate in the philosophy of science which holds vital lessons for Marxism in its quest to specify the scientificity of Marx’s critique of political economy and its procedures. After all, what critical realism philosophy of science, refounded in the hands of Roy Bhaskar, establishes is that all new sciences begin by hypothesizing existence of a discrete theoretical object based upon evidence of its peculiar effects which defy explanation by existing theory. But the kind and scope of the science that a scientist such as Marx grasped is necessary to produce knowledge of the new object; it is determined by the ontological characteristics of that object.

Instructively, Hoff does cover this critical realist philosophy of science dictum in asserting ‘the Marxian [method] is not the result of arbitrary criteria […] but must correspond to this object’s own internal structure’ (201). It is for this reason, as alluded to by Hoff (102), that Japanese Marxian economist Kozo Uno, who immersed himself when in Germany in the 1920s in Marx’s three volumes of Capital, would later eschew the Marxological debates over this or that letter Marx wrote and this or that discrepancy in various manuscripts of Capital, to follow the logic of the object ‘itself’ in developing his positions on value theory and other thematic issues alluded to above and in his ultimate refinement and completion of Marx’s project.