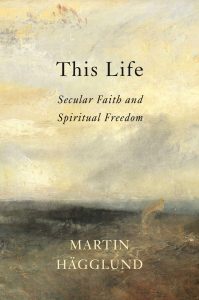 Mathew Abbott is Senior Lecturer in Philosophy at Federation University Australia. His current …

Martin Hägglund has written a book on secularity and socialism that combines systematic ambitions with great intellectual clarity. This Life: Secular Faith and Spiritual Freedom reads Kierkegaard, St. Augustine, Proust, Karl Ove Knausgaard, Marx and Martin Luther King Jr. to lay down profound critiques of religion and capitalism. With its defence of the integrity of secular life, convincing account of human distinctiveness and revolutionary critique of liberal democracy, Hägglund’s book makes breakthroughs that should be of interest to anyone working in critical theory or European philosophy. And remarkably, the work has done so while successfully addressing a broad non-specialist audience. As well as academic and leftist publications, it has featured in The New Yorker, The Boston Globe, New York Magazine, The Wall Street Journal, USA Today and Vogue Italia. It has been praised by the likes of Robert Smith and Emily Ratajkowski. It has already sold in the tens of thousands. That a serious contribution to radical thought could make such an impact is worthy of attention.

Analytic philosophers like to distinguish themselves from ‘continental’ thinkers by comparing the obscurity and opacity of their rivals’ philosophical writing with the clarity and precision of their own. This had particular currency in the heyday of the reception of postmodern French thought in the humanities departments of Anglophone universities, when disciples of Derrida, Foucault and others picked up style as well as ideas from their masters. The implication of such comparisons is typically that unclear prose is the result of unclear thinking. Yet the style of Derrideans and Foucauldians could be grounded in the philosophies they defended, which sought to chart the limits of sense and experience. Hägglund is a professor of comparative literature at Yale who wrote his first book in English on Derrida. But This Life is oriented by Hegel, and extends and challenges the best current Hegel scholarship. The book also draws on some of the more exciting and unorthodox figures in contemporary analytic thought, including the analytic Hegelians. It shares their commitment to rigorous argumentation but without partaking of the methodological and political conservatism characteristic of analytic philosophy. And despite its self-professed clarity, work in that tradition rarely finds audiences outside of professional philosophy, let alone outside the academy.

Hegel seems to have thought that doing philosophy in the way he wanted required him to put serious pressure on the German language, but one of his deepest insights is that there is nothing we cannot think, nothing unintelligible. Ludwig Wittgenstein (a thinker whose similarities to Hegel are startling on first apprehension) argued that we could never draw a boundary around the thinkable because doing so would require us to ‘find both sides of the limit thinkable’ (Wittgenstein 2001: 3). Perhaps philosophers who pursue the limits of thought fail to see that in positing limits they inevitably transgress them. Maybe they are happy to embrace that contradiction. But we do not need to think of thinking as imposing order on the world (and so as something with an outside). In their different ways, both Hegel and Wittgenstein sought to show that our concepts let reality be what it is, that thought does not stop short of reality but goes ‘all the way out’ (McDowell 1994: 13) to it. Hägglund’s book is replete with language of ‘conditions of intelligibility.’ And when he argues, for example, that the condition of the intelligibility of the living as living is that it ‘exhibits the purposive activity of self-maintenance’ (183), this is not a claim about how we construct the living but a claim about how we must take the living and hence a claim about living beings themselves. If ‘to be is to be intelligible’ (Pippin 2018: 77), then conditions of intelligibility are also ontological conditions. That kind of realism is crucial to the philosophy This Life does. It is part of what distinguishes it from work in the tradition from which Hägglund emerged, which is challenged so thoroughly by the ideas in this book and the method of presentation it employs.

The work is divided into two parts. The first presents arguments against orienting human life around the infinite or the eternal. The most striking of them may be this: ‘God has nothing to teach you about moral responsibility, since he cannot even understand a moral problem’ (170). Hägglund’s thought, which clearly owes something to profound to Heidegger’s existential analytic, is that only finite beings can be responsible to others, because responsibility is internally related to our vulnerability to the risk of loss; it follows that an eternal, infinite being could ‘never understand what it means to care for someone as irreplaceable’ (170). Developed out of a brilliant critique of Kierkegaard’s Fear and Trembling, the argument is provocative but powerful for how it takes commitments regarding ethics and vulnerability that are shared quite widely among continental philosophers to their necessary conclusion (atheism).

Less powerful in certain ways is the notion of secular faith running through the first part of This Life, which Hägglund opposes to religious faith. He defines the latter as a desire for the eternal and the freedom from care it seems to offer, while secular faith is oriented around concern for the finite in the face of its ultimate fragility. Hägglund does not argue that the religious are motivated only by religious faith in his sense; rather, religious and secular faith represent divergent orientations for every human life, and to the extent that the religious are oriented by temporal concerns they too are practicing secular faith. When a religious person mourns the loss of a loved one, then, their mourning is ‘animated by a secular faith in the irreplaceable value of a finite life rather than by a religious faith in eternity’ (62). Though a fair response would require confronting Hägglund’s arguments regarding risk and loss, theists may find his account simplistic for reducing religious faith to a desire for an eternity beyond all care. Others may wonder about the implausible prominence the account seems to give the notion of faith in general, as though some form of abiding belief must saturate literally all our cares, projects and practical commitments. Why must my ‘caring for someone or something that is vulnerable to loss’ (6) necessarily involve faith, secular or otherwise? Hägglund is insightful on vulnerability but to say I must ‘believe’ the life of my beloved ‘is valuable’ (45) seems falsifying.

The second part of This Life contains the book’s interpretation of Marx, its arguments for socialism and its account of human distinctiveness. The latter is grounded in a Hegelian distinction, which Hägglund draws with an unlaboured elegance untypical of contemporary Hegelianism, between natural and spiritual freedom. Because animal instincts are already expressive of norms, it is a mistake to contrast the behaviour of animals with the norm-governed actions of human beings. Freedom is not the particular province of spiritual animals because the animal as such is naturally free: an agent for whom something is at stake in its activities, which can succeed or fail in its pursuits, and for which things can go well or badly. The difference that arises in spiritual life does not merely negate but transforms the natural freedom inherent in all of animal life. We must determine the norms in light of which we act because, for self-conscious animals like us, the validity of those norms ‘is always implicitly and potentially explicitly at issue’ (176). This is a persuasive way of pitching a central Hegelian insight, which has significant potential for philosophical anthropology because of how it refuses to set rationalism against materialism. Hägglund’s invocation of Sebastian Rödl’s work in this context shows just how useful it could be to Marxists (194-6).

The last two chapters of This Life present a fruitful reading of Marx. Rather than oppose the Marx of Capital to the young philosopher, Hägglund reads his masterwork back through the notions of free activity and species-being laid out in the Paris manuscripts. That is a standard gesture in readings of Marx in this tradition, of course, but Hägglund’s reading gets its originality from how he grounds concepts in the accounts of finitude, natural freedom, and spiritual life outlined in previous chapters of This Life. Resisting certain biologistic and narrowly naturalistic tendencies in Marx himself, Hägglund gives ontological valence to his notions of life, species-being, living labour and living individuals. Though the book does not explore them, a similar move could have deep implications for contemporary eco-socialist work seeking to develop a red green politics out of Marx’s concept of metabolism.

One of Hägglund’s main achievements is fleshing out the concept of surplus value through his account of the surplus time that emerges from the capacity of all living beings to ‘generate more lifetime than is required to secure the means of survival’ (213). It is only because we enjoy surplus time that surplus value can be produced, because capitalists realise it in the portion of the week that remains after workers have produced the value needed to secure their own survival. And though this surplus time is a feature of life in general, only for spiritual animals – creatures with a self-conscious relationship to their own finitude and so to the limited time of their lives – does the question how they ought to spend that time arise. Yet capital organises our lives into an economy that captures our surplus time, denying the capacity for self-determination inherent in spiritual life and violating the very principles of freedom liberalism claims to realise. As with his account of spirituality, Hägglund’s interpretation of surplus time avoids separating human animals from the rest of nature without straying into the confusion and moralism of posthumanism and the new (so-called) materialism. It also forms the basis of the book’s major contribution to theorising socialist society, which Hägglund defines as a form of life measuring wealth ‘in terms of socially available free time’ (303) based on collective ownership of the means of production and labour according to needs. He calls this ‘democratic socialism’ but there is nothing reformist about these goals, which would require the end of profit and the wage relation.

It is exciting to find a book with conclusions like these speaking to such a wide audience. What if the approachability of This Life is a function not simply of Hägglund’s talents as an author and faith in the capacity of non-specialists for serious thought but of new clarity in the critical project: the kind that can emerge when the balance of social forces begins to shift? The book leads the reader to hope that soon enough we will look back on postmodernism, posthumanism and professionalised analytic philosophy as expressions of intellectual disorientation and stagnation shaped by a period of political retreat.