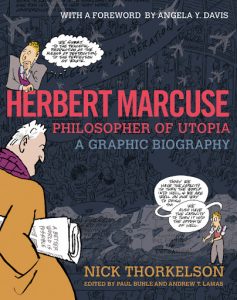 In some respects, the writings of Herbert Marcuse could be construed as quite dated. But, frighteningly perhaps, his critique of one-dimensional society and the psychological repressiveness of modern life seems all too relevant to our own era, with its mainstream resurgence of racist and nationalist ideologies amid both a dizzying consumerist culture and a profoundly neoliberal political economy. Like his famous Frankfurt School colleagues, Max Horkheimer and Theodor W. Adorno, Marcuse was well attuned to the ways that daily life in advanced industrial civilization showed tendencies toward fascist curtailments of freedom, even – especially – amid the only apparent freedoms afforded by commodity consumption and the entertainment industries. But unlike his colleagues, who are commonly interpreted today for their pessimism in the face of these phenomena, Marcuse maintained his belief in the utopian possibilities within this same cultural ensemble. For instance, virtually alone among his famous Frankfurt School colleagues, Marcuse descried in jazz, the beatniks, later hippies and other forms of popular culture and its adherent manifestations of resistance, or what he called ‘the Great Refusal’. Marcuse saw the value of play, of pleasure as a political issue, and he celebrated the freedom of the imagination. It is therefore perhaps appropriate to have a biography of the great social critic in the form of a comic book, with all the irreverence and humor to be found in that medium.

Nick Thorkelson’s Herbert Marcuse, Philosopher of Utopia: A Graphic Biography fills the bill wonderfully. Edited by Paul Buhle and Andrew T. Lamas, who are themselves scholars and activists in the Marcuse tradition, Thorkelson’s biography elegantly combines a basic life story of Marcuse from his childhood in Berlin to his death in 1979 with an informative summary of his ideas, his major works and his influence over others along the way. Thorkelson’s artistic style reveals a tendency toward the playful, with plenty of simple, even caricature-like drawings one might expect to see in an editorial cartoon, mixed with detailed tableaux that can heighten and give greater force to the text accompanying the imagery. Between direct quotes, references to pop music lyrics or protest songs, and even personal interviews with friends and family of Marcuse, Thorkelson – who at times even appears in the text himself, adding a touch of metafiction and personality to the whole affair – manages to produce a portrait of a man in full, the writer as well as teacher, husband, activist and ‘reluctant guru’. The result is an engaging narrative that can be enjoyed by readers who know nothing of Marcuse and longtime Marcuse scholars alike.

Thorkelson, a cartoonist who was himself involved in radical politics and the student movements during the 1960s, is especially adept at capturing the spirit of Marcuse’s writing, which is at once rigorously philosophical, drawing from the traditions of Kant and Hegel up through modern phenomenology and Marxist social theory, and also inventive and playful, delighting in those aspects of life that resist the ‘reality principle’. In this way, Thorkelson is able to maintain a jubilant spirit and sense of humor even when dealing with rather somber topics, such as war, antisemitism, racial discrimination, social unrest and so forth. Marcuse’s utopianism, which for him was the dialectical counterpart to any critique, is well represented in Thorkelson’s title, which breathes new life into that grand slogan from May 68 Paris – ‘Power to the imagination!’

The biographical account is divided into seven chapters, proceeding more-or-less chronologically from Marcuse’s youth and experience during World War I and the Weimar period, his studies of philosophy (Marcuse was a student of Edmund Husserl) and his association with the Frankfurt School, his flight to the United States, where he worked with the Frankfurters in exile while also providing studies of the authoritarian personality to the US government, then to his postwar experience as a professor at Brandeis, where he would meet his most famous student, Angela Davis, and later the University of California, San Diego, at which point he became what Thorkelson calls a ‘reluctant guru’ to the anti-Vietnam protesters and others seeking to change the world. In the course of this presentation, Thorkelson spends time on both Marcuse’s key publications, such as Reason and Revolution, Eros and Civilization, One-Dimensional Man, An Essay on Liberation and The Aesthetic Dimension, and his interpersonal relationships, both professionally (e.g. his sometimes testy relationship with Horkheimer and Adorno) and more intimately (e.g. his close friends, wives and children). Although brief, just a little over one hundred pages, this ‘graphic biography’ is a superb and fitting introduction to Marcuse’s life and work.

Angela Davis provides a foreword in which she reflects upon her own personal experiences as a student and protégée of Marcuse in the 1960s and 70s, while also making a strong case for Marcuse’s continuing relevance in our world today. She notes that her writing of the foreword coincides with the fiftieth anniversary of the Events of May 1968, the student and worker rebellion in Paris that were, in part, inspired by Marcuse and imbued with the spirit of his utopian philosophy. She notes that Marcuse was in Paris at the time, taking part in a UNESCO conference, and he addressed the militants directly. Davis also points out that it was around this time when, as a graduate student, she studied with Marcuse, learning about Hegel and Marxist theory, but also embracing the ways that critical theory must also address the antiwar movement. Thorkelson devotes a number of pages to Davis’s work with Marcuse and beyond, and Davis has continued to bring Marcuse’s legacy to bear on her valuable work. As she puts it, ‘Herbert Marcuse’s ideas continue to reveal important lessons. The insistence on imagining emancipatory futures, even under the most desperate of circumstances, remained – Marcuse teaches us – a decisive element of both theory and practice’ (vi).

In the afterword, Andrew T. Lamas provides a brief essay, titled ‘Let a Thousand Flowers Bloom’, in which he affirms the value of Marcuse’s immanent critique, ‘challenging and subverting the present with its own alternative possibilities’ (107). For example, Lamas explains that ‘from a Marcusean perspective’, the seemingly paradoxical slogan, ‘Demand the impossible!’ means ‘demand that which the system has labeled impossible but which can be delivered through a reorganization of society’s priorities and procedures’ (Ibid). This is an absolutely crucial insight for our times, when – as it has now becomes almost a cliché to observe – it is easier to imagine the end of the world than a different social and economic system for that world.

As befits a scholarly introduction, Herman Marcuse, Philosopher of Utopia, ends with a helpful list of ‘Further Reading’, featuring selections from Marcuse’s own writings along with a wealth of secondary materials. Undoubtedly, Thorkelson and the editors intend for this work to serve as a point of departure for further explorations of Marcuse’s work and legacies in our own time. It is a great starting point, but it also a delightful read in its own right, and one that is all too timely.