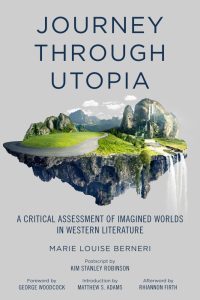 Arianna Bove is an independent scholar. She was a Lecturer in Politics and Ethics at the University …

The builders of utopias claimed to give freedom to the people, but freedom which is given ceases to be freedom.

Not many might have heard of Marie Louise Berneri, anarchist activist, journalist and public intellectual. She was only thirty-one when she died in childbirth. A brief, intense life lived in the eye of the storm between 1918 and 1949 across Italy, France, Spain and Britain.

Under review is her major work, published posthumously by the legendary anarchist publisher Freedom Press in 1950, and written whilst pregnant with the child she would lose and who would lose her. A Journey through Utopia was commissioned by the publishers; the brief: to edit a collection of extracts from the most famous utopian literature. But Berneri went well beyond it and produced an anthology to stand the test of time, primary texts which she not only introduces, but dabbles with her own commentary.

For those who don’t know her, Marie Louise Berneri was born in Tuscany, Italy, and in the early days of Fascism her family home was a meeting place for its opponents. She was four when her father Camillo was arrested for refusing to plead allegiance to the regime. After he fled to Paris, the family suffered intense state surveillance until they joined him in 1926; Marie Louise was eight. Having fought in the Spanish Civil war, Camillo was executed in Barcelona under suspicious circumstances in 1937, at forty. The execution was mandated by Stalin: in articles on the journal Guerra di Classe [Class War], Camillo had begun to expose the Soviet involvement in the Spanish Civil War denouncing the counter-revolutionary forces that were infiltrating the Republican movement, articles Marie Louise often translated into French. His execution galvanised his wife Giovanna’s militancy, who by this time had opened a small shop in Paris and become a point of contact for militants in the capital until her own arrest in 1940. She was eventually sent back to Italy to serve a prison term for subversive activities. By then, Marie Louise had moved to London where she spent her last twelve years engaged in a plethora of activities, organising, propagandising, writing, sheltering comrades from persecution. Most notably, for Freedom Press she edited the publications Spain and the World (renamed Revolt! after Franco’s win) and was a leading light of the anarchist movement in Britain and abroad. During her work in the second world war for the journal War Commentary, she was charged with sedition and prosecuted alongside British anarchists, but later acquitted in a trial that received much public attention and ultimately support for freedom of expression and her publishers. Prior to the work under review here, Berneri had published Workers in Stalin’s Russia, an exposé of Soviet realities based on evidence from workers’ accounts, printed twice in ten thousand copies, a truth there was as large an appetite for as were the forces mobilised to repress it.

It is in the introduction to Workers in Stalin’s Russia that we find the clue to the spirit motivating her Journey through Utopia. There, she claims, “The destruction of a mirage is an unpopular task. The man in a desert who is trying to convince his exhausted companion that the coveted oasis he sees in the distance is only a dream is likely to be answered with curses. […] But if the illusions about the happiness of the Russian people must be crushed, the belief in the need and the right to happiness and justice for mankind must remain.”

Whilst not particularly systematic or consistent, her introductions and commentaries in the anthology under review here are of interest as much as her compendium of excerpts. Indicative of her time, but only to a point: absent are the trodden tropes of Marxism vs. anarchism harangues, as is a stance, critical or otherwise, on the famed debate of scientific versus utopian socialism. Berneri was not one to follow other people’s agendas. As tributes by her memorial committee, and her work as activist and journalist attest, Berneri sought to make sense of events and ideas for herself away from the pressures of this or that “party line”.

This is reflected in her choice of texts. Arranged chronologically, the selection can surprise at times. Detectable throughout is her desire to make space for lesser known authors, texts, and events, and improve the classical canon of utopias. Spanning from Plato to Huxley, this is no ordinary anthology. When it comes to the utopias of the English revolution, for instance, much is made of Winstanley’s manifesto, the 1649 The New Law of Righteousness, and of the 1652 The Law of Freedom, his portrait of an ideal commonwealth, written in the wake of the end of the Diggers of St George’s Hill experiment and, like many other utopias, borne out of defeat. The Law is reproduced in large parts, with Berneri’s engaged commentary, to rectify the near oblivion of this figure from England’s history. Odd characters with less followers are also brought in the fray; amongst them Gabriel de Foigny, libertine and free spirit, exiled from Geneva, author of 1676 A new discovery of Terra Incognita Australis, where a sexless society beyond religion is portrayed in colourful tones. And surprising is the space granted to Christianapolis, which is both chastised for its religiosity and praised for its reliance on workers’ guilds and education.

Berneri’s commentary is informative and insightful, though her judgements at times seem rather harsh. For instance, Campanella is a madman seeking the recognition of the very Church that excommunicated, tortured, and threw him in and out of jail, and his City of God described as the product of a compromise with the authorities. Or Rabelais, included in the anthology for The Abbey of Theleme, is only there as a guilty pleasure. Amongst all Renaissance utopian writers, whom Berneri criticises for granting little personal freedom due to a reaction against the disintegration of society brought about by the new individualism of their times, Rabelais is credited for standing out as an outlier and Berneri obviously admires him, but his utopia is blamed for benefiting the aristocracy alone. Or Francis Bacon, whose New Atlantis, Berneri laments, contains “a wealth of detail which is as tedious as it is superfluous” and speaks of the dangers posed by “scientists without conscience”. Reflecting on the harnessing of nuclear energy in her own times, Berneri ascribes to the scientist “a sinister role”, but when Francis Bacon was writing, scientists were combatting idolatry, religion, and its political authority, and these were different times indeed.

An important theme emerges as Berneri moves closer to her times; an underlying criticism of Soviet Russia is evident in her treatment of all utopias said to prefigure it. In her view, the structure of society in countries where “social revolutions” took place (at the time, Russia and Spain), “resembles more that described by Utopian writers than that foreseen by Marx or Lenin” (209). This is not to praise them: Berneri observes that even fascist regimes were forced to adopt measures of social reforms advocated by socialists.

And herein lies her ambivalence. Berneri both wished to warn against utopia and quench a thirst for radical change. She believes that so long as utopias merely point to an ideal life and do not turn into a plan, they are harmless, but “a plan […] is a lifeless machine applied to living matter” (8).

Her assessment of nineteenth century utopias is particularly fierce and unforgiving. They are boring – like “affectionate mothers who’d kill their sons with kindness” (217-219). True: the level of homogeneity required by the social arrangements of, say, Bellamy’s Looking Backward is unsettling; and uniformity, centralisation and state-control not welcome. Berneri put it thus: “Insistence that ‘the will of the people is sovereign’ leaves one sceptical, for he does not tell us how a whole nation can agree in every small detail of life” (234).

Individual freedom remains paramount and the way Berneri believes it can express itself is through art. Thus, the generous twenty-page long section on William Morris does not come as a surprise: an individualist and a revolutionary, Morris’s position approximates the closest to Berneri’s own. Praise is given not only to the arrangements of his utopia, but also its method: Morris refrains from pontificating about issues he is not knowledgeable of, unlike “so many writers of utopia who imagined themselves to be oracles in everything, from baby-rearing to town-planning, from house-work to individual production”. Morris’s News from Nowhere lacks the “dullness and artificiality” typical of utopias of his period (259).

A worthy journey, and in good company. But one is struck by Berneri’s lack of appreciation for utopia as a literary or rhetorical device, an artillery of social criticism. For instance, Berneri refrains from engaging with seventeenth and eighteenth century utopias preoccupied with philosophical and religious problems because “however much one may feel tempted to examine these satirical works,” she claims, “they cannot be included here, for they are just the opposite of ideal commonwealths” (174). One can’t help but wonder why this is the case: satire is strangely being dismissed, yet its role in structuring the ambiguity of the utopian genre cannot be denied, especially given its inventor wrote Utopia in the style of serio ludere, making it a hallmark of so many, if not the best, utopias to come. And harmless they were not.

Important to mention is the critical apparatus included in the anthology. Foreword, Introduction and Afterword that not only rightly aim to present the author, but also follow in her footsteps, with a comprehensive review of utopias from 1949 to our days. The anarchist approach of the contributors, free from orthodoxies and their priestly pretences, is comprehensive, generous and ultimately useful: a place from where a reader can travel much further afield in all sorts of directions.

The saying “don’t let the perfect stand in the way of the good” is poignantly repeated by contemporary politicians, egregious censors of the political imagination, and sums up a prevailing and disturbing anti-utopian sentiment of our times. Berneri too had a dislike for perfection; for her, what is perfect is not free (309). But perfect merely means accomplished.

The question remains, can there be a loss of freedom in utopian aspirations? Or isn’t what most utopians sought to accomplish instead freedom itself? Eliminating the poverty that makes us shackled, dispensing with the inequality that wants us to be servants, destroying customs, cultures and traditions that bend our bodies to ceremonial postures, debunking schools of thought that reduce us to intellectual vassals, abolishing the privileges that impose arbitrary restraints. Where these are the accomplishments of utopias, perfection is freedom, but one that is no more than a starting point. Because what one does with freedom remains unwritten and, perhaps, for some, even unthinkable.