Marx & Philosophy Review of BooksReviews‘Europe’s Fault Lines: Racism and the Rise of the Right’ by Liz Fekete reviewed by Julius Schneider 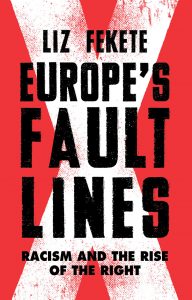 Liz Fekete
Europe’s Fault Lines: Racism and the Rise of the Right

Cas Mudde recently described in The Guardian the 2010s as ‘the decade of the far right’. It might indeed be argued that its shift from the margins of society into the political mainstream has been the defining feature of global politics in the previous decade. In Europe especially, the extreme right has managed to safely secure its position as an electoral force, participating in government coalitions and dominating many of today’s policy discussions. Given these sweeping changes, it is not surprising that the populist radical right is nowadays a heavily researched phenomenon in academia and many commentators offer their opinions on where these diverse political actors are coming from, why they are so popular right now and what might be done to stop them.

One such attempt is Liz Fekete’s Europes Fault Lines: Racism and the Rise of the Right, which draws on her experience from working for over 30 years at the Institute for Race Relations and as an editor of Race & Class. This enables her to analyse the current political conjuncture from a unique position, being both firmly in touch with developments at the level of civil society and in academia. Her book is a timely contribution to spotlight the worrying increase of institutional racism in nation-states, the complicity of mainstream parties in enabling the rise of the far right and, especially, a radical critique of current ‘exit extremism’ programmes. As will be suggested below however, the book sometimes takes an overly deterministic approach when discussing the role of globalisation and post-industrialisation for the rise of the extreme right.

The burdensome exercise of clarifying the terms of the debate surrounding the themes of the book is first apt. There has been a proliferation of terms to unite and differentiate radical right political actors. Fekete differentiates between the extreme right, far right, ultra right, hard right and New Right. We will focus our attention on the first three. With ‘extreme right’ are meant political parties running for office and positioned to the right of traditional conservative parties. While they might want to radically alter the current state of affairs, they accept the basic rules governing a polity and reject the use of violence. This is the main difference with the ‘far right’, which does not speak out against violence and has, for example, a larger shared background with a particular countries’ fascist past. Surprisingly, for Fekete, the German Alternative für Deutschland can be considered a far right party, a view that could be challenged. While this point is beyond the scope of this review, it shows how difficult it is to apply labels to constantly evolving parties, which are made up of different wings and often might demonstrate internal variations between federal and local branches. Lastly, under ‘ultra right’ Fekete considers extra-parliamentarian and counter insurgency movements like ‘The Identitarians’ or the English Defence League.

One particular incident exemplifies both logics: on the eve of the city festival celebrations in the German town Chemnitz in August 2018, a middle-aged man was stabbed to death supposedly by, important for the developments to follow, an asylum seeker. Over the next few days, riots ensued in the Saxon city, as a variety of right-wing alliances called for protest marches. Those marches were frequented, according to the Office for the Protection of the Constitution, by a ‘who’s who’ of the German neo-Nazi scene, calling it an ‘obvious closing of ranks’ by the ultra right with more moderate elements of civil society. Notwithstanding the warnings, local police were heavily understaffed and could not – or did not want to – stop the violent attacks on foreign-looking passersby. These attacks, detailed by journalists or evidenced through video recordings, were described as intentional ‘houndings on immigrants’. After a couple of days finally police reinforcements were called in and the situation calmed.

But the Chemnitz riots also showed the active part state organisations can play in making extreme right views acceptable in society. After the incidents, the head of the Federal Office for the Protection of the Constitution, Hans-Georg Maaßen (Christian Democratic Union of Germany), gave a remarkable interview. He stated he had ‘no reliable information’ that ‘houndings of migrants’ had taken place in Chemnitz and that he had ‘good reasons to believe’ that a video showing one such hounding was doctored. As it turned out, he had no reason whatsoever to believe that the video was doctored and after public outrage had to enter early retirement. Hence, we can find here not only inadequate responses over extreme right agitation, but also the spreading of, effectively, far right conspiracy theories by the state.

It is with this state complicity that Fekete highlights a major challenge for the left. Namely, the impenetrability of those branches of the state like the police and the intelligence services, which make it almost impossible to stop the spread of extreme right viewpoints and conspiracy theories. Hence, we can summarise that to ‘argue that the extreme right is the main carrier of racism is to miss the point’ (116), but that instead there are many different breeding grounds from which their viewpoints spread.

Fekete’s most refreshing and original analysis concerns the ‘Exit programmes’ of various European countries, which aim to re-integrate radicalised citizens into society. These ‘Exit strategies’ exist on different levels, from EU-wide to national and local initiatives and cover all kinds of extremism. Naturally, Fekete is particularly interested in the implementation of the re-socialisation of white extremists and neo-Nazis. She shows how, in contrast to counter-radicalisation programmes for Islamists, white extremists do not have to show remorse for their crimes. Instead, various ‘Exist schemes’ actively provide a culture of white victimhood and pursue an overly psychological approach. Extremists here do not have to come to terms with the ideology they upheld, nor acknowledge the violence their viewpoints entail, but are excused for their deeds. This is because they, apparently, only sought guidance and a sense of belonging in joining white extremist groups, fleeing an increasingly diverse social sphere, where they can’t find their place. Hence, they are considered as sheep who have strayed too far from the flock, from which they need to be guided back. Additionally, Fekete argues that the ‘Exit programmes’ denounce anti-racist voices calling out known neo-Nazis, because this branding supposedly creates ‘a hostile environment that hinders the successful exit from white supremacism’ (134). In summary, ‘Exit programmes’ are hugely ineffective because they gloss over the political convictions of extremists, further establishing the myth of white victimhood and are therefore incapable of genuinely changing extremist viewpoints, which continue to spread at the grassroots level.

While de-radicalisation programmes at the grassroots level are remarkably unsuccessful in providing lasting change, there is another set of explanations, which Fekete mentions at various points. These are popular in both academic and non-academic commentaries, from the political left to the political right. The story usually goes like this: processes like globalisation and post-industrialisation produce an identity crisis in the neglected sectors of society, which increasingly turns people towards the extreme right. These fears lead to a prioritisation of cultural cleavages over economic cleavages and the left has to therein ‘win back the losers of globalisation’, who ‘vote against their own fundamental interests’. We can take issue with these kinds of explanations since they re-introduce a mechanical point of view concerning developments within society, almost rendering them inevitable. Instead, it can be argued that processes such as globalisation do not have actor-like qualities and do not create ‘identity crises’ by themselves. Instead, attention ought to be paid to how political actors actively create, shape and perform those ‘identity crises’. Even if it were the case that we could hold globalisation wholly accountable, this does not mean that the ‘neglected sectors in society’ automatically turn to the right, but that they could also have been susceptible to left-wing critiques of financial capitalism or neoliberalism’s perverse focus on the isolated, self-responsible individual. Of course we know that this doesn’t frequently occur. But explanations rendering this development inevitable are inferior to accounts focusing on the active role the extreme right plays in structuring political identities or the complicity of state structures and traditional parties in facilitating their rise. Naturally, Fekete mainly holds the latter view and even criticises ‘this tendency – to treat white extremists as the passive damaged goods of global change and not actors in their own right’ (132), but at different points retreats to the easy, mechanical explanation (e.g. 5, 32, 81).

While it is clear that there is no simple way out of the dilemma, Fekete mentions positively the role left-wing popular-democratic mobilisations can play. For her,

‘[t]oday’s socialism, like anti-fascism, must defend cultural pluralism, a basic tenet of democracy […] Democratic renewal needs its tribunes and its electoral parties, and without them, the authoritarian right will remain in power. But political parties can no longer challenge the extreme right through centralised machine politics, media and spin. The left must be rooted in local communities, supporting new models of economic and community regeneration based on self-help to give people hope and dignity’ (176).

While we can wholeheartedly support localised forms of resistance and the fight for a vibrant, anti-fascist social climate, the struggle for consent, for which the extreme right is increasingly winning the Gramscian war of position, should not be forgotten. Previous identifications with the left are increasingly failing and a new story is needed, around which different sectors of society can rally. Such a new historic bloc could be structured around issues such as anti-austerity, anti-inequality or a Green New Deal.

In conclusion, Europe’s Fault Lines is a rather easy read, written for a wide audience. It does not focus on narrow academic debates, but gives a broad overview of the worrying developments related to the rise of the right in the recent decade. In doing so, it sometimes moves too quickly from case to case and context to context, but this can be excused for the sake of painting the larger picture. Nevertheless, on occasion, the complete disregard of theory is noticeable. For example, a constructivist media theory could have supplemented the various examples given regarding the media’s role in the rise of the extreme right. But otherwise this book is useful for many people, as those placed in academia, practitioners in civil society and the interested reader can take valuable insights from it.