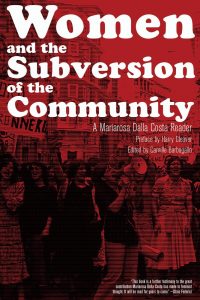 Kaitlin Peters is pursuing a PhD in sociology at York University in Toronto, Canada. Her work is …

Women and the Subversion of the Community brings together a collection of essays written by seminal Marxist Feminist scholar and activist Mariarosa Dalla Costa, which had previously been unavailable to an English-speaking audience. The texts cover a wide range of topics related to the exploitation of women’s reproduction under capitalism, including Dalla Costa’s political activism in Italy during the 1970’s with the Wages for Housework Campaign and the Italian feminist political group, Lotta Feminista (Feminist Struggle). While the majority of the essays speak to the political and economic climate of Italy from the early 1960’s to the late 1970’s, the continued relevance of Dalla Costa’s work in understanding women’s condition under capitalism is clear. The reader will recognize that Dalla Costa’s incisive decipherment of the relationship between economic crisis, state policy, masculinist medical institutions, and women’s limited roles as wives and mothers, continues to inform women’s current condition. Importantly, the collection acts to inform social reproduction theory by demonstrating the evolution of Dalla Costa’s thinking about reproduction under capitalism. While Dalla Costa begins by focusing on women’s domestic role in service to capital, she concludes by rethinking the question of reproduction to include the exploitation of the environment and the degradation of its reproductive powers.

The collection begins with Dalla Costa’s early writings where she establishes the theoretical foundation for her political activism with the Wages for Housework campaign in Italy. Beginning with an argument that most readers will be familiar with, Dalla Costa explains that the unpaid and undervalued work women do in the home is essential for capitalist accumulation. Namely, the drudgery of unpaid domestic labour, the physical act of bearing children, and the emotional labour women do for their husbands are necessary for the reproduction of the working-class, enabling labour power to be used by capitalists in the production process.
Dalla Costa’s theorization of women’s position under capitalism provides theoretical context for the collection’s transition to her political activism, including with the Wages for Housework campaign. The central demand of the campaign was that women should be paid for the work that they do in the home. While readers will likely be familiar with Wages for Housework and the central premises of social reproduction theory, Dalla Costa’s theorisation of the campaign in relation to popular working-class movements during this time period may be unfamiliar to some. In Dalla Costa’s review of her work with Wages for Housework, she provides historical context to explain why the movement was considered so revolutionary at the time. By organizing women who had traditionally been marginalized in working-class movements, Italian feminists were rejecting the strategy of the Operaismo movement, an Italian theory and political movement that was popular during the 1960’s and early 1970’s, which focused exclusively on the experiences of factory workers and their role as agents of revolution.

In rejecting the idolization of the factory worker and focusing on the home as a site of struggle, Dalla Costa centers the experiences of women as labourers and in doing so provides a more useful strategy against austerity for the contemporary period. As developed economies bear witness to deindustrialization and declining unionization rates, it is not only exclusionary to focus on the revolutionary potential of factory workers, but it also makes little sense to primarily focus on a class that has been rapidly eroded. Dalla Costa’s focus on the productive value of women’s work in the home also provides an effective rebuttal to contemporary liberal feminist propositions that suggest that gender equality can be achieved if women ‘lean in’, working double shifts as both paid workers and unpaid workers in the domestic sphere.

The next set of essays in the collection introduces Dalla Costa’s interrogation of the Italian state’s response to women’s resistance during the post-war period. Dalla Costa notes that lowered fertility levels in Italy during this time was met with a swift response by the Italian state, which attempted to use emigration to both increase the supply of labour power and stratify the working-class. In many cases, the Italian state was successful in stratifying the working class, pitting those in the Global South and southern Italy against those in northern Italy’s industrial triangle. Emigration also retrenched an imperialist division of labour that saw racialized immigrant women doing reproductive work that Italian women would not or could not do. It is in her discussion of emigration that Dalla Costa highlights the dynamic interplay of resistance between capital and women as drivers of history. Dalla Costa notes that the gains of emigration were not unilaterally made by capital. Highlighting Italian women’s agency, she demonstrates that emigration was often taken up as an opportunity by women who moved to the cities where they could escape the burden of domesticity and hard farm life in the country. In this way, Dalla Costa demonstrates Italian women’s agency as they navigate and potentially transform barriers into opportunities. In recognizing women’s ability to resist capital, Dalla Costa does have the tendency to speak about decreasing fertility levels and marriage rates as if they were primarily the consequence of Italian women’s decision to resist the limited roles available to women as wives and mothers. This kind of oversimplification, which may have been purposeful on Dalla Costa’s part, provides a somewhat romantic narrative of Italian feminist resistance. As such, sometimes the essays can read as more of a feminist rallying cry, portraying idealized women-worker actors, than an accurate portrayal of Italian women’s condition and thought during this time.

The remaining third set of essays in the collection explores the state’s participation in engineering women’s roles as wives and mothers for the benefit of capital by focusing on social welfare policies in America under Nixon and Roosevelt. Dalla Costa problematizes the American welfare state, stating that so-called progressive social policies were used to entrench a traditional family model with its basis in the authority of men in the home. Under Roosevelt’s New Deal, women’s unpaid role in the home was taken for granted, despite women’s increasing participation in the labour force. The New Deal called for women to become conscientious household managers in the new economy where they would play a critical role in producing the labourer as a form of ‘investment’. Dalla Costa notes that Nixon’s proposed Family Assistance Plan further attempted to entrench men’s authority in the home, preventing the breakup of the nuclear family by attaching assistance to a male wage rather than given directly to women. As such, Dalla Costa genders the welfare state, demonstrating that increased social spending is not synonymous with improved conditions for the working-class at large. Rather, the American welfare state was used to entrench a gendered form of class that consigned women to the home where they could be exploited for their reproductive labour.
The collection then shifts to introduce Dalla Costa’s thoughts on how the masculinist medical profession, and the literal demonization of female healers, was used to mechanize women’s bodies for the benefit of capital. The criminalization of abortion guarantees a stable supply of labour power for capital, and the mutilation and excision of women’s reproductive organs purported to eradicate pathologized sexuality that prevented women from benignly accepting the positions of wives and mothers. Dalla Costa strongly condemns procedures including clitoridectomies, ovariectomies, and hysterectomies, considering them to be nothing more than tools used to guarantee women’s submission to capital. This is another moment when the reader cannot help but acknowledge the contemporary relevance of much of Dalla Costa’s work. The rise of right-wing populist politicians, and their weaponization of traditional gender ideology around the globe, has made the question of whether a woman’s body is her own a contentious debate once again.

However, for this collection of essays to be even more contemporarily relevant, it would have been useful for Dalla Costa to connect her expanded understanding of reproduction and the degradation and the environment with women’s reproductive health. Her current analysis suggests that procedures, including hysterectomies, are largely punitive tools used by the medical profession to produce submission in women. While this is a useful interpretation of medical intervention, it is important to consider that such procedures, namely hysterectomies, can also be important for the maintenance of women’s health in the face of environmental degradation. Scientific literature has demonstrated that capitalism’s impact on the environment, including the presence of high levels of industrial pollutants, is directly impacting human health, including women’s reproductive health (Trabert et al. 2015). As such, hysterectomies are partially a response to the environment’s inability to sustain life, which is a consequence of the capitalist system itself.

The collection ends by demonstrating Dalla Costa’s expanded understanding of reproduction under capitalism to include the exploitation of the land and its reproductive powers. Here, Dalla Costa’s more recent essays contribute to what has become an avalanche of public opposition against capitalism’s contribution to environmental degradation and the contemporary climate crisis. For Dalla Costa, any social movement that resists the exploitation of reproduction under capitalism must also be a movement around land and the environment. She suggests that international movements of solidarity must be established to resist land privatization and the expropriation of Indigenous peoples because it is through the continued expropriation of people that capital is able to continually re-establish itself along sexed and racialized lines. Ultimately, the environment and women are both exploited for the purpose of capital accumulation, yet done so within the purview of certain limits, lest we are unable to reproduce at all.

In establishing the value of Women and the Subversion of the Community, its continued relevance exceeds the scope of both the state of working-class resistance and the condition of women in the face of neoliberalism and austerity politics. Many of these essays act as calls to action against not only the exploitation of women’s reproductive labour, put also limited leftist strategy that would confine working-class movements to the idealized and increasingly irrelevant factory worker. At the same time, Dalla Costa’s theoretical thought and political action provides a much-needed rebuke to current liberal feminist formulations and serves as a useful strategizing tool for working-class mobilization against capitalism’s destruction of the environment and the ability of the community to reproduce itself.