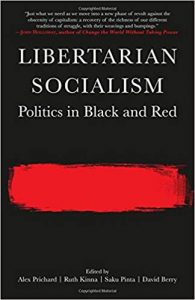 Jade Saab is a Lebanese/Canadian writer based in Scotland. He is working toward a PhD at …

This collection of thirteen essays threads through various movements and intellectual works that can be categorized into the loosely defined term of ‘Libertarian Socialism’. Readers would be pleased to know that the collection does not put forward a prescriptive synthesis of the ‘Black and Red’ but rather uses historical examples to tease out the many contradictions and difficulties that arise in creating such a synthesis, theoretical or practical (organizational) and asking whether or not is such a synthesis would even be desirable or if it is time to move beyond such attempts altogether towards something new.

The essays touch on the theoretical domains of Syndicalism, Council Communism, Autonomism, the Situationists and Carnival Anarchism. Theoreticians discussed include Gramsci, Sorel, Guérin and C.L.R. James, to name a few. By highlighting such various theories, movements and leaders, the collection transcends the overdrawn discussion over, what is perceived to be, the original split of the First International between Black and Red and completely obliterates any illusions of a static revolutionary left stuck worshiping historical ghosts at the altar of dogma.

Although the essays are not directly linked, they are ordered in a way that reflects a sort of chronological continuity, starting with theoretical investigations into splits between black and red and ending with the Situationists and Anarchism in the 1970s. An introduction by Ruth Kinna and Alex Prichard highlights the main arguments of each essay and the three objectives of the collection as 1.) presenting the relationship between Marxism and anarchism as fluid and porous, 2.) to explore the overlaps and tensions between various Marxisms and anarchisms, and 3.) shedding light on the socialist movements and how they have related to their historic context and were fuelled by the borrowing of ideas. Interesting reflection is also provided on the dominance of Marxism in the field of revolutionary socialism and how criticism of anarchist movements is wrongfully tied to a failure of theory as opposed to historical material conditions – a leniency quickly furnished to justify failures found in ‘Marxist’ revolutions. Weaknesses of the collection are identified as a gender imbalance of the theoreticians reviewed and a geographic focus European and North American subjects. Regret should also mentioned for the collection’s lack of exploring the cultural and artistic expressions that have attempted to bridge the Black and Red divide.

We can group the essays based on the themes of theories, movements and leaders. Under the first theme of theory, chapters two, three seven, eleven, and twelve can be correlated. Here, Paul Blackledge and Ruth Kinna, in chapters two and three, put on a fierce defence of Marxism against the implied individualism and liberalism of anarchism. Blackledge argues that an essentialist view of human nature advocated by anarchists in relation to power leans and borrows from liberal aphorisms and notions of freedom. As such anarchists fetishize the individual and remove them from their social context in the name of rejecting authority. Here, for example in the false equivalence put forward by Stirner who equates any form of struggle with self-sacrifice in the name of metaphysical notions such as state, class, nation, god, etc., completely undermines the self-emancipatory doctrine found in the collective action prescribed by Marxism. This, according to Blackledge ‘acts as a fundamental barrier to conceptualising a real democratic alternative to capitalism’ (30). Kinna takes a similar approach in questioning the role of the concept of the individual in anarchism. Her essay highlights the divisions within anarchism itself, suggesting a break between individualists, egoists, mutualists and communists with the first two being open to the maintenance of private property with a greater focus on anti-statism. This diversity is levelled against those who dismiss anarchism as fundamentally individualist, but by leaning on the work of William Morris, shows the weaknesses in non-communist anarchism by demonstrating how the threat of competition and inequity continues to be present. This theoretical weakness is tied to the same lack of discussion on the function of democracy discussed in Blackledge’s essay.

Chapters seven by Saku Pinta reflects on council-communist views and critiques of the Spanish Civil War. Chapter eleven by Benoît Challand discusses the theoretical approach of Socialism ou Barbarie in France, and chapter twelve by Jean-Christophe Angaut does the same in regard to the Situationists. Pinta highlights how ideological tensions were exacerbated against the backdrop of anti-fascist struggle in Spain and how this exacerbation led to confusion and extreme adjustment of political practice. Through the eyes of council communists, a critique of the CNT-FAI’s performance during the revolution is provided. Criticism levied include the need for more organizational coordination and the capitulation to the liberal and Stalinist idea of the united front. It is worth noting that this criticism is placed on a backdrop of acknowledged success. Challand’s discussion of Socialism Ou Barbarie (SouB) centres around the role of spontaneous self-organization. This ideological discussion was taking place in an environment of Trotskyist factionalism which made the uniting work of SouB more difficult. This combined with rigid leadership that handicapped SouB’s potential for cross pollination.

Angaut’s essay similarly focuses on the role of ideology, but this time in how the Situationists attempted to reincarnate Marxism along the lines of the Hegelian philosophy from which both Marx and Bakunin drew. As such the Situationists attempted to go back before the split in the First International while incorporating sociological analysis about modern alienation.

Where the first two essays in this theme show the rigidity of anarchism and Marxism, the second two show their pliability. This goes down to the method of analysis where the first pair take a purely theoretical approach, whereas the second group show how against the backdrop of historical conditions, practice leads to greater ambiguity and flexibility.

Under the second theme of movements, Lewis H. Mates, Andrew Cornell and Toby Boraman reflect on syndicalism in Durham Coalfields (chapter four), anarchism in the US (chapter nine) and carnival and councilist anarchism in Australasia (chapter thirteen). These essays have a similar overlap to the previously discussed theme; however, they are different as they show a specific focus on practice.

Mates’ essay tracing the ideological origins of syndicalism through the various splinters of Marxist groups illustrates how organizations with the Marxist heritage can include anarchists or even become dominantly interpreted as anarchist movements due to slight alterations in practice. The essay brings into fine focus the struggle between maintaining ideological purity and developing movements with more focused appeal to contemporary conditions. Conrell’s essay focuses on how anarchists in the US borrowed from civil rights movements to forge practices of resistance that lean on pacifism, cultural revolution and prefigurative community-building through autonomous small groups. Finally, Boraman discusses how an analytical shift from class division based on production to a division of ‘order-givers’ and ‘order-takers’ leads to the development of two distinct anarchist trends in Australasia, the first situating itself within the white-collar workplace and the second encouraging ‘festival-like’ rebellion against work itself with an emphasis on committing petty crimes.

What all these essays have in common is highlighting how slight and even no variations in theoretical analysis can lead to wide ranging differences in practices within the same movements. It is unfortunate however that some of these essays, especially chapter four, read more like a genealogy of movements as they fail to link the impact of their analysis to present day discussions.

Under the third theme of leaders, we have discussions on Georges Sorel (chapter five), Antonio Gramsci (chapter six), C.L.R. James (chapter eight), Daniel Guérin (chapter ten) and Michael Hardt and Antonio Negri (chapter fifteen). Similar to the last theme, what these chapters bring together is the difficulty in situating individual thinkers as either exclusively Red or Black, especially if their thought has evolved over time (which it always does) and as their social circles seem to include people from various tendencies.

Renzo Llorente suggests that Sorel’s take is neither anarchist nor Marxist but a successful synthesis of a coherent anarcho-marxism. From Marxism, Sorel borrows themes of historical materialism, the centrality of the class struggle, the precondition of economic development and self-emancipation. Themes here include anarchism, anti-statism, anti-parliamentarianism and a commitment to the general strike, even if in mythical form. This results in a synthesis of practice to which most anarchists and Marxists can subscribe. However Llorente notes that some Marxists may be unpersuaded by the hard-line anti-political character of this synthesis as it provides priority to the economic struggle.

A similar study is taken in the essay on Gramsci by Carl Levy, which examines the development of the theoretician’s thought. Leaning on the concept of counter-hegemony, a case is made by Levy that Gramsci’s socialism was ‘more libertarian’ than Lenin’s particularly due to its disdain for advancements in capitalism as a hindrance as opposed to a gain in proletarian identity. Nevertheless, Levy argues that Gramsci’s dismissiveness of anarchist movements in Italy and support of Jacobinism saw him move closer to Bolshevism.

Christian Høgsbjerg’s analysis of C.L.R. James highlights the fragmentation of Marxist thought between Leninism, Trotskyism and Stalinism and James’ analysis of the Russian revolution as influenced by Kropotkin is examined. David Berry undertakes a similar analysis of Guérin’s synthesis of Marxism and anarchism after his break with Trotskyism. Here we find Guérin’s effort to rehabilitate anarchism as exclusively socialist as well as his criticism of overtly libertarian readings of Marx. His efforts on both however only resulted in an ‘approximation’ of a theory of libertarian communism. Finally, David Bates’ analysis of Hardt and Negri highlights, again, the importance of updating one’s analysis to match changes in labour composition and which specific issues need to be highlighted.

Apart from the minor criticism levied above concerning the somewhat dry genealogy of movements, another criticism is worth noting. Throughout the essays, differentiations are made between ideology, theory and practice even though none of these terms are ever clearly defined. This is peculiar for a book dedicated to proving the porousness of ideas. Dedicating space at the introduction, as opposed to providing brief summaries of the essays, would have gone a long way in helping the reader determine which fault lines are being studied while giving the collection a more cohesive feel.

Aside from these criticisms, it can be easily said that the editors of Libertarian Socialism: Politics in Black and Red, by weaving through the themes of intellectual leadership, movements and theory, meet the three objectives set out in the book. Readers will find it hard to walk away from the collection without a feeling that the future of the radical socialist movement will flourish along the lines of some sort of libertarian socialism, even if its form has yet to be uncovered.