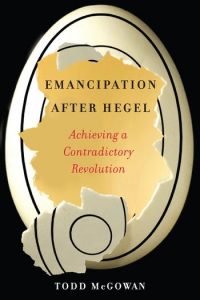 Emancipation After Hegel sets out to free Hegel from the peculiar straitjacket that finds him locked into categorically opposed interpretations. Similar to the way in which Nietzsche has been conscripted by the political right but also esteemed by the left, Hegel is frequently criticised and condemned for espousing totality yet also adopted as a progressive thinker of contingency and freedom. Then there is the problem of Hegel’s dense prose that at times approaches the opaque and which sometimes goes beyond it into a realm of the indecipherable. For McGowan, the obscurity of the prose style is related to Hegel not having a suitable language available for his philosophy of contradiction. The terms bequeathed by German Idealism were bereft of the kind of conceptual grammar that Freud, conceiving of an unconscious contradicting conscious wishes, would later be able to provide. This is quite a piece of ‘whatifery’ and McGowan devotes a chapter to making the case that Hegel would have found traction in the idea of the desiring subject engineering its own failure. The employment of Freudian language would probably have still failed to satisfy Russell or Popper’s objections, concludes McGowan, but it might have ‘won over Theodor Adorno or Georges Bataille’ (53).

As such, this sparklingly articulate book seeks to rewrite the old-school post-it note for Hegel’s philosophy, ‘thesis, antithesis, synthesis’, with one word: contradiction. The antithesis to any thesis is not something of an oppositional nature but an internally constituted and intractable self-negation that undermines its own identity. A simple instance of this provided by McGowan is the assertion that we cannot be certain of any would-be claim to knowledge. The logic of this blatantly tears the ground out from under its own feet because the assertion itself is a claim to knowledge and therefore is itself open to sceptical doubt. The book’s wager is that such an obvious self-undoing instance is the tip of a dialectical iceberg that carries what is emancipatory in Hegel’s thought.

Hegel’s fabled Absolute is theorized by the author as a psychoanalytic parallel to Lacan’s traversing of the fantasy. Recognising that there is no fully constituted object at the end of the rainbow entails acknowledging that the only available satisfaction derives from the seeking of it, rather than in its finding.

If every thesis is capable of undermining itself, then contradiction is epistemologically unavoidable for Hegel; ‘the thought of contradiction is the essential moment of the concept’ (Hegel, 2010: 745). Hegel’s absolute, misleadingly and mystically capitalized in translation as the Absolute, is the recognition that contradiction cannot be synthesised because there is no coherent whole that could accommodate it.

Contradiction is unavoidable and this is seen to entail the destabilising of statements of identity because of the way they rely on difference. McGowan’s example, the statement that ‘Leonard Nimoy is mortal’, is seen as a failure of predication because the category of mortality applies to others; it has to be understood in a context of other mortals and, because it cannot avoid otherness, it fails to identify Leonard Nimoy. Similarly, ‘Leonard Nimoy is the actor who plays Spock’ may purport to be a statement of identity but it implicitly references other actors playing other roles. Epistemologically, identity depends on difference and only emerges through the failure of predication: ‘identity consists in being separation as such, or in being essentially in the separation, that is, it is nothing for itself but is rather moment of separation’ (Hegel, 2010: 358).

It is the understanding (Verstand) that creates separations and multiplicities, positing the entities of the world as distinct. Yet there is no oneness prior to this. What the understanding separates is undifferentiated to begin with and some original wholeness is just a retrospective result (71). For Hegel, it is reason (Vernunft) that recognises difference as essential to identity and – the step that leads to his positioning within what would become psychoanalysis – this includes self-identity. The subject’s failure to coincide with itself fuels the lack of self-identity that creates a contradictory being driven by desire. McGowan’s explications that read Hegel in the light of Freud (relatively little is said about Lacan) are characteristic of his ability to unpack Hegel’s dense prose and relate it to contemporary life. Reason, contrary to the image of the rational person as solemnly rising above desire, is what allows the subject to grasp and live a contradiction-ridden life. He characteristically provides a quotidian example – opening a doughnut shop in a capitalist economy – in the light of Hegel’s contrast in the Phenomenology between what he calls ‘virtue’ and ‘the way of the world’, to bring out what McGowan calls the ‘impurity’ of reason (74-8).

Emancipation After Hegel positions itself in orbit around a rejection of reading Hegel’s metaphysics as pre-critical and, contrarily, champions him as the philosopher who located Kant’s antinomies not in subjective limitations but in things themselves. In an important chapter, ‘The Insubstantiality of Substance’, McGowan defends an ontological claim for Hegel’s much discussed remark about substance being subject. This defence allies an interpretation of Hegel not with the likes of Robert Pippin but principally with Slavoj Žižek, Catherine Malabou and Adrian Johnston. Echoing Žižek’s reiterated argument in Sex and the Failed Absolute, contradiction is constitutive and, because it is at the heart of everything, whatever arises is necessarily inconsistent and ‘not-All.’ What we think reality ought to be – something substantial and whole – is deeply thwarted by its own impossibility of being. Moreover: ‘[t]he speaking subject can appear because being suffers from a failure to be self-identical. If being were one or whole, it could never provide the opening for the emergence of speech’ (91).

A chapter is also devoted to the influence of Hegel’s Philosophy of History – and the way it has shaped simplistic readings of the philosopher as advancing a teleological vision of history progressively marching towards a state of freedom. Hegel is held responsible for the misunderstanding because of the way his work does indeed present a triumphant image of history’s progress but, Philosophy of History being addressed to his students already versed in his philosophy, assumes a background that is not made explicit. McGowan provides this conceptual background so that history becomes an area for discovering ‘the contradictions that strip the authority from figures of authority’ (135). The infamously proclaimed ‘end of history’ is when subjects accept the inescapability of the freedom this discovery brings and acknowledge that they ‘must give duties to themselves rather than receiving them from an authoritative Other’ (136). Support for this interpretation is found in Kojève’s revaluation of the lordship and bondsman dialectic in the Phenomenology of Spirit. The struggle for recognition puts history on the side of servants who can revolt and establish a basis for mutual recognition amongst themselves – and this becomes the moment of the end of history.

Freedom will come to the servants because the power of negation is with them. They experience their own nothingness by confronting the fear of death and through their work the nothingness of the world is also negated. What is negated is the servants’ fond belief in their identity as substantial beings and, given the nature of their transformative work, the equally illusionary belief that the external world is permanently unalterable. Unlike masters, they lose the enthrallment that has tied them to their identity. As developed through Hegel’s accounts of stoicism, scepticism and the unhappy consciousness, negativity is not enough to achieve a proper recognition of the subject’s freedom. What is also needed is the abandonment of belief in a hidden or obscure knowledge that is dependent on the Other – such abandonment being a way of understanding what constitutes absolute knowledge – and McGowan’s down-to-earth example is the child who witnesses its parent acting foolishly in public and being mocked for it. The parent becomes a figure of lack, deprived of the substantiality of its authority, and the child gains freedom. Parental authority has not disintegrated but its aura of mystery has been lost.

In a curious move, perhaps a result of the author’s zealousness in patterning everything around Hegel, Marx is criticised for embedding freedom in an ‘absolute beyond’ (168). The basis for this claim is the way Marx avoids saying much about what a communist society would be like. By leaving freedom to be realized in some future world, argues McGowan somewhat precipitately, he reinstitutes a substantial Other. At times, the author is in danger of using contradiction as a trump card that explains and judges everything.

Emancipation After Hegel covers a lot of ground and broaches a variety of topics but not in a heavy-handed manner. McGowan’s readability, as evident here as it is in his previous book, Capitalism and Desire: The Psychic Cost of Free Markets (2016), is traceable to his ability to relate abstruse ideas to aspects of everyday life and common experiences. His style of writing when offering explanations for difficult terms and ideas results in an admirable lucidity and this makes Emancipation After Hegel a valuable primer for anyone not already well versed in reading Hegel.