Marx & Philosophy Review of BooksReviews‘Creating an Ecological Society: Toward a Revolutionary Transformation’ by Fred Magdoff and Chris Williams reviewed by Justin Bzovy 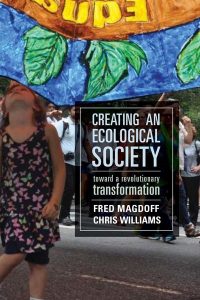 Fred Magdoff and Chris Williams
Creating an Ecological Society: Toward a Revolutionary Transformation

Justin Bzovy has recently left academia to pursue a career in agriculture. He has taught at several …

Magdoff and Williams present and defend a version of ecosocialism, or a vision of an ecological society, on the grounds that ‘we need an economy designed to be at the service of humanity, regenerating and maintaining the health of the biosphere, upon which we and other species depend, an economy without the compulsion for exponential growth, able to function well while constantly evolving’ (284). Their work is split into four main parts. The first two parts attempt to show that capitalism is responsible for the poor health of the biosphere, and that we are not doomed to live in a capitalist society. The latter two parts give us their vision of an ecological society, and how it would transform our agriculture, use of water and energy, and means of transportation. Though I am quite sympathetic with such a vision, there are some issues with their arguments for ecosocialism, most of which rest on how they paint capitalism as the villain. As they put it: ‘We maintain that capitalism, of necessity, operates to create our global social-ecological crisis’ (49). In their view, not only is capitalism, which is characterized by competition, consumerism, and greed, responsible for climate change, but it is also responsible for nearly all social inequalities. See especially their Chapter 4 Capitalism’s Effects on People. Further, in a capitalist society the rich, powerful, and greedy are our social, as well as political, leaders. And thus, capitalism is not only destroying the planet, but it is immoral. The main issue with this book is that the style of argument is unlikely to sway those who aren’t already convinced that there is something wrong with capitalism, though it may nudge those who seek greener forms of making profit off the fence. A far more direct engagement with defenders of the capitalist system would be required to sway the more critical reader.

One problem lies in their reliance on refutation by quotation. The main problem being their use of material from Marx and Engels. Those that hold that communism, rather than capitalism, is the worse of two evils will not be swayed by quotations, and for those that are already anti-capitalist, this constitutes needless preaching to the choir. Part of the problem lies in how quotations are often presented. The style here is to make a general point, for example, that the Earth is not something we own, but something that we are a part of, and then to present a quotation from Marx or Engels that supports the point, for example, `As Marx wrote in Capital, “Even an entire society, a nation, or all simultaneously existing societies taken together, are not the owners of the Earth. They are simply its possessors, its beneficiaries, and have to bequeath it in an improved state to succeeding generations”’ (232). This mode of presentation belies a critical engagement with these texts, and unfortunately leaves the reader with the impression that they would be better off reading Marx and Engels for themselves. Further, the relevance of some of their quotations even within the context of their line of argument is not always salient. For example, the quote from Engels on page 229 appears rather out of place. In that section, the authors are discussing the human capacity to communicate, and the quote from Engels pertains to our ability to discern the laws of nature. The connection is obscure at best. If a revolution is ultimately required for the changes they seek, ecosocialists might try to first win over the court of public opinion.

Oddly, we do not see any engagement with those that present sophisticated defenses of the free market, for example, John Rawls and Robert Nozick go unmentioned, as do a litany of others. Instead we see modern political leaders figuring as the main defenders of capitalism. Though there is sophistication to Magdoff and Williams’ critique of capitalism, and even given the fact that it’s worthwhile to engage with more popular defenses of capitalism, this omission verges on committing a straw man argument. For example, one of the main arguments for capitalism they tackle in Chapter 6, Does “Human Nature” Prevent System Change?, is based on the claim that humans are hardwired for capitalism, which has been voiced, in their examples, by Margaret Thatcher and Nancy Pelosi, among others. The idea here is that we are, to some degree, stuck with a capitalist system. Magdoff and Williams’ attack on this argument involves the unnecessarily strong claim that ‘[t]here is no such thing as a hard-and-fast human nature’ (194). Part of their argument for that claim involves pointing to the fact that capitalism hasn’t always been around.  Capitalism, they suggest, has been around for 500 years, but industrial capitalism for 250 years (184). But if that’s the case, then how can capitalism be responsible for the sorts of social inequalities that predate it? Oppression surely pre-exists capitalism, yet Chapter 4 details how capitalism oppresses. First, arguing that we are not hardwired for capitalism would suffice to make their point without seemingly contradicting the connections they want to draw between capitalism and oppression. Second, despite the fact that they attack popular defenses of capitalism, Magdoff and Williams fail to engage adequately with popular arguments against communism or socialism, such as pointing to the demise of communist states like the U.S.S.R.. However, they do note that a problem with such communist states lies in the nature of their top-down bureaucratic planning (290). But this problem doesn’t receive much attention, though they do favour bottom-up planning. Again, the point I’m making is that these styles of argument are not going to win many converts, but perhaps proselytizing is not the goal of this book.

The most striking portion of the book, Chapter 11 Living in an Ecological Society, focuses on painting a picture of an ecosocialist society and how it differs from the capitalist society of the last few hundred years. Their society is democratic, has a planned economy, and is worker and community controlled.  However, here too there are many claims that might strike an unsympathetic reader as implausible. For example, the claim that travelling with others will be a delight to be savoured in such a society (266). Or the claim that there will be no need for bosses or managers (297). Such claims sound more like advertisements than arguments for the revolution. Without an argument these claims are difficult to evaluate at best. There are also claims about their vision of society that are a bit scary, for example, the claim that ‘[a] huge portion of the population currently work in jobs in the wealthy countries of the North that would not be needed in an ecologically-minded society’ (295). Though there certainly are problems with the job markets in such countries, convincing the people that live there, especially those that enjoy what big cities have to offer, that they would be happier fishing and farming is going to be a tough sell. Again, this reads more like an advertisement for those unhappy in their work. Given the picture of society they are presenting, more needs to be said about how ecosocialists might overcome past problems with collective and state-run farms.

What’s going to be an even tougher sell for those on the other side of the fence is their claim that ‘[i]n order to replace capitalism with an ecological society we need a revolution’ (305). This is the focus of their final chapter, Revolution: Creating an Ecological Society. By revolution they mean ‘[t]he total rearrangement of social power and its reconstitution on the basis of substantive equality’ (309).  Here they discuss the ‘why’ and the ‘how’ of an ecosocialist revolution: which activist movements they see themselves as aligning with, how to build momentum, unify, and further international struggle. In a sense, this chapter reads like a call to arms. Here would have been an excellent place to engage with Marx and Engels’ account of the sort of revolution required to overthrow the capitalist system. Another place would be their Chapter 11, which reads far more like a description of a utopian future than what we see in The Communist Manifesto. Here at least they do recognize a criticism coming from the conservative right, the contention that ‘all revolutions end in tyranny’ (320). The response here is that the sort of revolution they are presenting is more of a continuous struggle or process (328). Again, more needs to be said about how ecosocialists might overcome past problems with similar revolutions. Simply redefining the term is not going to convince those that aren’t already convinced that such drastic measures need be taken.  This will lead only to confusion and talking past each other when ecosocialists do engage defenders of the free market.

Despite these minor issues, which are more to do with how their vision is framed than anything else, there is much food for thought in Magdoff and Williams’ work. This is evidenced by their attention to detail, especially their reliance on empirical data and contemporary ecology and climate science. See especially the third chapter Capitalism versus the Biosphere. There are also thoughtful discussions of many of the contemporary movements they seek to align themselves with, such as Black Lives Matter and the Occupy Movement. But here perhaps it may be better for the reader to examine the details themselves before getting caught up in the ideological struggle. For with some careful thought, one can accept most of the changes they are suggesting, while rejecting their attacks on capitalism.