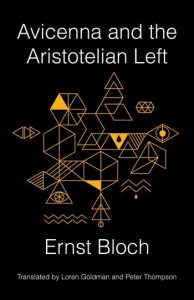 We live in an age when the worst consequences of a certain kind of flat-footed version of scientific materialism are all too apparent, from a studied unconcern about the despoliation of natural environments, through the critical deterioration of air quality in cities all over the world, to disastrous and probably irreversible changes in the Earth’s climate. In this context thanks are due to Loren Goldman (University of Pennsylvania) and Peter Thompson (University of Sheffield) for making this essay from Ernst Bloch accessible to an Anglophone audience for the first time.

Bloch (1885-1977) was a contemporary of the ‘first generation’ Frankfurt School, both enjoying the friendship of some of its best-known members and engaging in dialogue with them as a philosophical ‘critical friend’. However, his interest in the significance of social phenomena such as religion and popular art, as well as his enduring utopianism, set him aside from the mainstream. As this volume demonstrates, these themes are in no way absent from Avicenna and the Aristotelian Left; but they in no way compromise or temper his commitment to philosophical materialism. Rather, as Goldman and Thompson show, Bloch drew attention to the importance of an alternative materialist tradition dating to the pre-Mediaeval Islamist philosopher Ibn Sina (Latinised to Avicenna). In doing so, he anticipated by fifty years the rejection of dualism and the holistic, situated and organically-oriented critical stance which in our own time has come to be associated with New Materialism.

This edition features a useful introduction by Goldman, situating Avicenna and the Aristotelian Left within the context of Bloch’s own works and within Marxist approaches to the history of philosophy. Bloch’s style is known to be difficult in the original German, so it is all the more creditable that Goldman and Thompson have rendered it in a translation which is lucid and readable. The essay itself is concise but learned, supported by excerpts from the original texts and constructing its argument that Ibn Sina’s work lays the foundations for an Aristotelian Left with reference to a range of philosophers from the early Islamic commentators to the European Renaissance. Goldman also shows clearly how Bloch’s insight and optimism chimes with the vital materialism of twenty-first century thinkers such as William Connolly and Jane Bennett.

Focusing on conceptually parallel – though temporally separated – developments in Islamic and Scholastic philosophical interpretations of Aristotle, Bloch proposes that within each tradition the same division emerged. In one strand of interpretation, which he names as the Aristotelian Right, thinkers sought to accommodate Aristotle’s metaphysics of form and matter to religious orthodoxy, doing so by associating matter with the things of the world and form with the spiritual aspects of life, with an inherent implication that the latter was the superior domain. In the other, the Aristotelian Left, Aristotle’s form and matter were seen as interdependent, existing and functioning in a dynamic revealed in the workings of nature, with neither element taking metaphysical or ethical priority.

Bloch argues that the accommodation of Aristotelian philosophy to religious doctrines, with their prior commitments to the pre-eminence of the spiritual, laid the foundations for an impoverished version of materialism which continues to influence Western thinking about science today. Indeed, with reference to the persecution and execution of the Renaissance philosopher Giordano Bruno, Bloch strongly implies that the scientific revolution of the seventeenth century effectively surrendered to the claims of ecclesiastical establishments (of various stripes) to authority in matters spiritual, as a price worth paying for being permitted to diverge from Scholastic orthodoxy in their scientific practice and conclusions. The resultant mechanistically-grounded practice and philosophy of science achieved much, but in the process it developed self-referential justificatory dogmas concerning the proper scope and nature of its practice.

While Bloch’s scholarship is both broad and impressive, one may wonder whether his interpretations of his ancient and Mediaeval sources would be persuasive to specialists in these fields. Aristotle’s treatment of matter and form is the subject of extensive interpretive debate, ranging over both what we know of his own texts and the treatments of them by commentators through the ages. Ibn Sina’s own commentaries, while certainly contested both within Islam and by Christian Scholastics, often suggest a somewhat Platonic version of Aristoteliansm which does not obviously cast him in a materialist mould, even the dynamic materialism which Bloch sees as having been lost in the throes of the theological-philosophical settlements of the seventeenth and eighteenth centuries. Recognising the philosophical debts of one’s own thought (or of one’s own inspirations – as Bloch shows, Marx’s understanding of materialism extended beyond the mathematical and the mechanical) is an important and potentially productive exercise; appropriating the sources of  those debts to a twentieth-century narrative of (admittedly unconventional) naturalism is quite another.

In this context, it is worth noting Bloch’s somewhat eccentric choice of supporting texts and commentary on them, which form the final part of the volume. It is odd, to say the least, that someone interested in the implications for materialism of the dynamic of form and matter found in Aristotle should not explicitly appeal to the Physics, where Aristotle addresses just this topic. The other surprising element is how little of Avicenna we find among these excerpts. There is more from other Islamic philosophers, including the Aristotelian Right commentator Ibn Rushd (Averroës); and also from Giordano Bruno, who emerges as the real inspiration for Bloch’s postulation of an Aristotelian Left.

Bloch’s essay becomes less compelling, to this reader at least, when he bewails the alleged limitations of his Aristotelian Left predecessors and moves to propose how art provides an insight into the workings of the dynamic, supra-mechanistic materialism which he sees imperfectly presented in their work. Bloch’s objection to both Aristotle and his interpreters is that they effectively constrain the form-matter dynamic within a closed system demanded by the teleological commitments present in their metaphysics. His own version of the realisation of this dynamic takes its inspiration from Hegel’s concept of Geist. But in this Bloch risks convicting himself of the very charge which he levels at his Aristotelian predecessors. For Geist itself may be understood as involving a teleology, an unfolding content is formed dynamically within a particular nexus of (material) conditions but whose direction is determined by an objective process of logos embedded in human thought. It is thus hard to make sense of the concept of Geist without some appeal to teleology, albeit one of direction or ‘line’; and such an implied teleology can hardly be held to be more open, or less ‘idolatrous’ in Bloch’s terms, than the teleology of circle which he attributes to the early Aristotelian Left. In committing to an account on which Aristotelian matter and form combine to play out within Geist, Bloch loses the force of his own insight into the Aristotelian form-matter dynamic as an open system. This becomes most apparent in the final part of the essay, in Bloch’s characterisation of art as a force both liberating and perfecting; in this conjunction, with its latent question, “liberating for what?”, Bloch’s utopianism comes to the fore. Goldman reminds us that Bloch understood his particular ‘concrete utopianism’ as an optimistic tendency, a philosophy of hope and realisable creativity; but it is difficult to avoid the thought that the utopian aspirations which Bloch wishes us to grasp as essential to ourselves are just those which conform with Bloch’s own vision of human development. Despite Bloch’s best efforts to work through the ramifications of the principle that the world is animated and self-developing, what counts as a valid expression of this ‘open system’ is unlikely to transcend the normative force of Bloch’s own political-philosophical commitments.

Notwithstanding these caveats, Bloch’s essay is engaging and erudite, bringing to light the philosophical heritage of twenty-first century new materialism and demonstrating that it was not merely a neglected theme in philosophy but was actively suppressed at critical historical moments. Goldman’s introductory essay draws out how Bloch was concerned to establish the Aristotelian conception of self-determining matter in opposition to the restricted picture of matter – in which “everything is present in it, mechanically present” –  which has been inherited by modern science; it also gestures towards the restrictions which post-Cartesian dualist orthodoxy has imposed on our scientific investigations of the world and our political understanding of its possibilities. Goldman and Thompson have worked to bring an important work to our attention; the question now is whether our contemporary Left has the wherewithal to deploy its methodological insights effectively.