Marx & Philosophy Review of BooksReviews‘Landscape between Ideology and the Aesthetic: Marxist Essays on British Art and Art Theory, 1750-1850’ by Andrew Hemingway reviewed by Richard Hudson-Miles 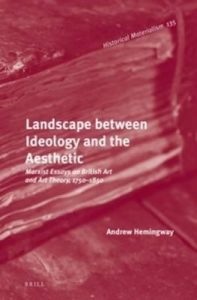 Andrew Hemingway
Landscape between Ideology and the Aesthetic: Marxist Essays on British Art and Art Theory, 1750-1850

Richard Hudson-Miles is an art historian and artist based in West Yorkshire. He is a member of the …

As Andrew Hemingway’s earlier edited volume, Marxism and the History of Art (Hemingway, 2006), indicated, the roots of the ‘social history of art’ can be traced back through the work of Arnold Hauser in the 1950s, to the philosophical complexity of late-nineteenth/early-twentieth century Warburg and Vienna Schools, and ultimately to the materialist conception of history raised by Marx and Engels themselves. However, the publication of T. J. Clark’s ‘The Conditions of Artistic Creation’ (1974), in the Times Literary Supplement, represented a watershed for the discipline of art history in the UK. This essay, immediately following the combative opening chapter of Clark’s book on Gustave Courbet, Image of the People (Clark, 1973), formed something akin to a manifesto for a radical programme of re-reading the art-historical canon through the lenses of Marxism, feminism and, subsequently, deconstruction. This would find its institutional validation at the University of Leeds, where Clark held a professorship between 1976 and 1980, and his influence remains evident. Clark insisted that the discipline of art history should aspire to regain its earlier materialist rigour, foregrounding the conditions and relations of artistic production, which had been lost amidst the conservative retreat towards formalist analysis on the one hand, and the liberal pluralism engendered by the ‘hot-foot pursuit’ of voguish post-structuralist theory on the other. Central to the problematic of this ‘new art history’ was the relationship of the artwork to ideology, a conversation which overlapped with the anglophone reception of the work of Louis Althusser and his followers. Artistic production was thus figured as an act of interpellation within dominant-hegemonic artworld discourses and institutions, and via careful analysis, the artwork revealed as evidential site where those same ideologies could be critically assessed.

Hemingway’s latest book is a self-avowed partisan work of ‘Marxist Art History’ (1), explicitly following Clark’s example (461), and as such a contribution to both the ‘social history of art’ and the tradition of Marxist ideology critique. Spanning over 500 pages, and including eleven lengthy art historical essays, this contribution is significant, and its scope and importance can only be suggested in a short review. This volume ‘extends, supplements, and revises’ Hemingway’s earlier Landscape Imagery and Urban Culture in Early-Nineteenth-Century Britain (Hemingway, 1992), both of which take as their subject the British Romantic landscape painting produced during the period of social transformation labelled by Eric Hobsbawm as The Age of Revolution. Alongside more famous names such as J. M. W. Turner and John Constable, the repeated focus of this book’s analysis is the work of the so-called ‘Norwich School’ of painters, including John Crome, Robert Ladbrooke, John Sell Cotman and his sons Miles Edmund and John Joseph Cotman, amongst others. The stakes of this selection are aesthetic as well as political. As one of the book’s central essays argues (181-213), provincial artists such as these were often marginalised by both their geographic distance from the capital and the London-centrism of the artworld’s discursive apparatus. At the same time, the appellation ‘Norwich School’ is revealed as an incoherent invention of that same art-historical apparatus; a label of convenience, naturalised as art historical fact in the manner of Barthesian myth, which is incapable of accounting for the heterogeneous artistic outputs of the artists above under scrutiny. More interestingly for historical materialists, this same essay exposes the connections between the invention and rise of the ‘Norwich School’ and the acquisitive cultural activities of the immensely powerful Colman family dynasty, industrial capitalists rich on the flour and mustard business, who began collecting the ‘Norwich School’ in 1863, ultimately amassing a collection of 228 oils and 985 watercolours (208). Hemingway shows how the Colman family used this collection to cement their reputation as cultural philanthropists, thus disguising the worst of their employment practices under an image of benevolence, and through the careful curation of an ideological image of progressive and picturesque Norfolk agriculture, aligned their material interests to that of a wider provincial bourgeoisie searching for ‘some basis for municipal and regional pride’ (210). The image of the ‘Norwich School’ then being indivisible from the interests of capital.

Similarly, a fascinating essay on Cotman’s unusually spare landscapes (217-45) reveals them not to be prophetic anticipations of painterly abstraction, ‘before their time’ as establishment criticism has it, but loaded with complex socio-cultural meaning, which would have been readily apparent to an early nineteenth century audience. Via a brief but cutting critique (218-21) of the idealism that underpins the formalist art criticism of Roger Fry or Clive Bell, Hemingway demonstrates how such criticism, by locating the meaning of these pictures as purely internal to the work itself, and imposing neat art historical lineages and narratives upon them post-hoc, amounts to an effective denial of the social which has political consequences for both art history and history in general. In contradistinction, the materialist readings offered by Hemingway fundamentally transform the works under question. For example, Cotman’s painting ‘Kett’s Castle’ (c. 1808-10) depicts a sombre landscape with the ruins of St. Michael’s chapel, the base of the Norfolk rebellion (1549) led by Robert Kett, in the background.  Critic Miklos Rajnai interprets this image formally as one of Cotman’s most abstract works; Hemingway shows that this image actually represents a collective repression, between artist and his public, which effectively buried the bourgeois dread of popular revolution beneath the imagined harmony of an agricultural landscape of ordered private property following the enclosures (233-6).

Hemingway’s book is organised into three sections. Firstly, a survey of method and the historical mediations of the concept of ideology (1-37). Secondly, a section of essays dealing with the relation of eighteenth and early nineteenth century aesthetics to social change and concepts such as taste, gender, class, progress and nationhood (38-213). Finally, a series of exemplary essays, demonstrating the capacity of Marxist art history to reveal these landscape paintings as complex indices of ideological subjectification and ideological practice within the social formation of early nineteenth century Britain. The sustained ‘Theoretical Apologia’ (1-37) will be of special interest to readers of this volume. Not only does this outline Hemingway’s methodology, qua social historian of art, but also doubles as a critical survey of philosophical conceptions of ideology, as they have developed from simplistic notions of ‘false-consciousness’, to the structural binarisations of (Marxist) science and (bourgeois) ideology found in Althusser’s For Marx and ‘Ideology and Ideological State apparatuses’, then onwards through the work of Therborn, Eagleton, Macherey, Hadjinicolau, before culminating in Adorno who, for Hemingway, represents one of ‘the two antipodes of the Western Marxism’, Leninism and Hegelianism (25); the other obviously being Althusser. Hemingway expresses sympathy for the Adornian position, and prefers Göran Therborn’s post-Althusserian The Ideology of Power and the Power of Ideology, to the Althusserian position, rejected as structural left-functionalism, unhelpfully silent on the formation of specific ideologies (8). Instead, Therborn’s dialectical notion of interpellation as ‘subjection-qualification’ is employed throughout to show how these various artists are incorporated within the hegemonic Romantic Weltanschauung, yet via that interpellation, are given qualification to produce art that differentiates that prevailing social order in complex ways, which subsequently can be read as acts of ‘ideological self-disclosure’. At the same time, when Hemingway (following Clark) insists that art must be ‘read in the way an analyst listens to a patient if its latent ideological content is to be perceived’ (461), it is difficult to escape the ghosts of the Althusserian symptomatic reading, unfashionable since Rancière’s devastating critique of its counter-revolutionary effects in Althusser’s Lesson.

Though much of these essays have appeared in print before, their collation within this volume has the benefit of not only producing a sustained single author study into the landscape art of the period, but also a timely reminder and exemplar of the force of historical materialism as a mode of analysis contra dominant hegemonic ideology. Hemingway makes a semi-apology in the preface for the ‘waspish’ tone of the earlier essays, written when ‘theoretical and political battle lines [in art history] were more starkly drawn than they are today’ (xii), and Thatcher’s ideological guru’s were trying to repurpose the image of the British landscape for their own political ends. This reviewer sees no problem with the acerbic tone whatsoever; if anything it is a timely reminder of what Hemingway terms ‘the snobbery and shallowness of establishment art history’ (459), and its complacent mediocrity. The juxtaposition of old essays with fresh content, authored specifically for the volume, not only serves Hemingway’s stated ambition of aligning his prior analysis of British Romanticism with the recent rediscovery of a romantic dimension of the Marxist tradition in ‘William Morris, the young Lukács, and Ernst Bloch’ (1), but also constitutes a dialectical image of the ‘social history of art’ over the last three decades. As such, the book has to be recommended not only as an impressive work of art historical rigour, but also as a timely reminder within the current conjuncture that the stakes of Marxist art history not only concern which class controls the proper names of history, but whether our understanding of our own history, art and culture, and the class basis of them, is rational or ideological.