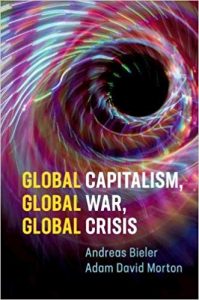 David J. Bailey is Senior Lecturer in Politics at the University of Birmingham. He teaches and …

In this important new contribution to the field of global political economy, Andreas Bieler and Adam Morton present an impressively comprehensive framework through which to understand contemporary global capitalism. In doing so, they provide us with perhaps one of the most complete accounts to date of the contribution that historical materialism can make to the study of contemporary global capitalism and its global political economy. The book proceeds through a series of analytical moves that carefully builds each of the layers of their framework, from ontological questions of structure, agency and internal relations, through to an analysis of the ‘international’ that is underpinned by a rich understanding of the relationship between capitalist relations of production and the political institutions to which they are internally related.

The book engages with literature across the board of both mainstream international political economy (IPE) and the critical and Marxist literature, highlighting key points of difference with each. It brings together in a highly distinctive and impressively coherent manner some of the most important contributions to historical materialism, representing what is clearly a central work in critical IPE and the study of global capitalism. Here we find Marx, Trotsky, Luxemburg, Gramsci, E.P. Thompson, Poulantzas, Meiskins Wood, Federici, and Brenner, all combined in a novel framework that will appeal to all scholars with an interest in contemporary global capitalism – both in terms of getting to the bottom of a number of the key debates that critical scholars have been pondering for several decades, and in terms of doing the theoretical ground work for those seeking a coherent and critical approach to the study of contemporary global capitalism that remains rooted in the principles of historical materialism, whilst at the same time being attuned to the debates that are exercising critical scholars today.

The core argument of the book is that we need an understanding of the internally-related nature of the different elements of contemporary global capitalism (including hegemonic ideas, the ‘material’ structure of the economy, the workplace, the ‘social factory’, the sphere of social reproduction, the state and the inter-state system, and the pressures for international expansion). This, moreover, must be able to provide us with an understanding of the core dynamics that are generating pressure for change and resistance and the trajectories, events and crises that we have witnessed over, especially, the last two decades. These dynamics result from the increasing subordination of human society, under capitalism, to the requirements of profit-seeking capitalist production (and the realisation of that profit); all of which is expansionary, uneven and crisis-prone. In making this argument, Bieler and Morton take on two key challengers. First, they highlight the problems associated with the more mainstream contributions to the IPE literature, which either critique ideas without considering the relationship between those ideas and the structure of contemporary global relations of production (constructivism), or remain intent on fetishizing the market economy (liberalism) or the inter-state system (realism) without considering the way in which these are historical aspects of contemporary global capitalism. Second, they show how a number of Marxist contributions to IPE have failed to take account of the expanded and interconnected nature of contemporary global capitalism – and as a result either erroneously privilege the nation state as the focus of analysis (Open Marxism) or incorrectly conflate ‘the market’ with capitalism (World Systems Theory).

The book proceeds in three parts. The first part introduces a number of important conceptual reflections that form the ontological basis to the approach advanced. This makes the case for a philosophy of internal relations, drawing on Bertell Ollmann, and one which is cognisant of the ‘structuring conditions of capitalist social relations of production’ (p. 44). In doing so, however we also need to understand the role of ideas, and especially the ‘material structure of ideology’ (p.72), particularly as set out by Gramsci.

The second part adds a number of more concrete thematic considerations to this ontological apparatus. This includes an engagement with the ‘origins of capitalism’ debate, in which the authors side with Brenner (against Wallerstein) in the claim that capitalism began with the introduction of mass wage labour in England in the seventeenth century; although interestingly they also incorporate the insights of Anievas and Nişancioğlu regarding the non-Eurocentric origins of capitalism (which, at first sight, the reader might consider to be incompatible). This is framed with specific reference to Trotsky’s theory of uneven and combined development (which highlights the necessarily unequal nature of global capitalism) and Rosa Luxemburg’s claims regarding the inherently expansionary nature of capitalism into non-capitalist spaces. Further, Bieler and Morton set out a theory of the contemporary capitalist state (including those institutions such as the European Union which adopt a transnational state form), which draws on Poulantzas to highlight the competing fractions of capital which jostle for influence, such that the state becomes a ‘material condensation’ of class relations. The approach set out not only focuses on capital, however, as Bieler and Morton draw on E.P. Thompson, Harry Cleaver and Silvia Federici to discuss the way in which working class agency is formed and enacted, including in the workplace, in the ‘social factory’, and in the sphere of social reproduction; all of which creates the possibility for resistance, contestation and rupture.

The third part of the book uses this rich framework to study and illuminate some of the most important empirical developments in global capitalism that have taken place over the past two decades. It is here that we focus most explicitly on the three themes of the book’s title: Global Capitalism, and especially the insights that Bieler and Morton’s approach provide for us with regard to the rise of the so-called ‘BRICs’; Global War, and especially the class-driven expansionary tendencies that motivated the invasion of Iraq; and Global Crisis, with a specific focus on the uneven and combined development of the Eurozone crisis. As the authors show, each of these aspects of global capitalism have, in turn, been met with episodes of contestation and class struggle. Hence, the authors end the analysis by highlighting some of the key forms of resistance that we see in the present, with a much-welcome call for ‘combative ruptures of class struggle’, which of course we need all to contribute towards. The point, after all, is to change it.

One of the key merits of the book is the incredible breadth of radical thinkers that are included in the discussion. For anyone entering the field of critical political economy there can probably be no better starting point in terms of being introduced to the most important debates of relevance to current discussions. That the book does this at the same time as synthesising so many of these contributions into such a coherent framework of analysis is more impressive still. At times, I did wonder whether so many contributions could be brought together in a coherent and compatible manner;  and that the authors were able to do so was key to me being so pleasantly surprised at how well the synthesis worked.

In terms of areas where I might disagree, perhaps I might point to what seems to be a reduction of Open Marxism to ‘state-centrism’. This reading left me with a stronger grasp of the differences between the approach set forth in this book and that of the Open Marxists. But it also left me wondering whether the insights of Open Marxism really are essentially statist. Whilst Bieler and Morton do an excellent job of showing how many of the key contributors to ‘actually-existing’ Open Marxism are state-focused in their analysis, nevertheless Open Marxism could perhaps alternatively be reduced to the claim that ‘the state is a capitalist state’; in which case there seems nothing to prevent Open Marxists from also adopting a conceptualisation of the ‘transnational state as a transnational capitalist state’. If that were possible, then maybe the objections to Open Marxism raised by Bieler and Morton might be less compelling?

Also, in terms of resistance, whilst Bieler and Morton do an excellent job of highlighting opportunities for rupture in the present, I suppose (if only for rhetorical purposes) I have to declare a preference for the ‘Copernican turn’, in which capital, rather than labour, is always-already on the back foot. Rather than labour having the capacity to rupture an unevely combined and expansionary global capitalism, instead we might also tell a story in which global capitalism never quite makes it. In such an account, perhaps, it is the disruptive agency of labour which comes first.

In sum, this book makes a major contribution to critical IPE and Marxist approaches to contemporary global capitalism. Those seeking a theoretically sophisticated and comprehensive account of the key debates within contemporary Marxism and historical materialism, and especially those seeking a framework through which to analyse the contemporary global political economy, can do no better than to begin with (and many will need go no further than) this hugely impressive contribution.