Marx & Philosophy Review of BooksReviews‘Marx, Capital, and the Madness of Economic Reason’ by David Harvey reviewed by Fabian Van Onzen 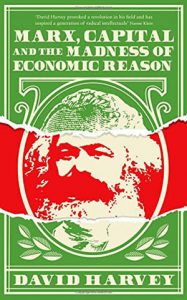 David Harvey
Marx, Capital, and the Madness of Economic Reason

Many young leftists had their first exposure to Marxism through David Harvey’s online lectures on Marx’s Capital. His talks on YouTube, recorded from his seminars at New York University, have had over a million views and resulted in the formation of Marxist study groups around the world. Harvey’s ability to make Marxian economics accessible makes him one of the best expositors of Marxist theory. Harvey has recently published a new book, Marx, Capital, and the Madness of Economic Reason, which is written as a first introduction to Marxian economics. The book builds on some of Harvey’s earlier work, such as his Companion to Marx’s Capital, and introduces the main concepts of historical materialism. Also included is an engagement with recent literature from the Italian autonomist school on the concepts of anti-value, the refusal or work, and the debt economy.

The main thesis of the book is that even though Marx wrote Capital in the nineteenth century, ‘capital is still with us, alive and well in some respects, while plainly ailing if not spiraling out of control, drunk on its own success and excess, in others’ (xiii). Throughout this book, as well as in the rest of his works, Harvey argues that today’s capitalism is much closer to the pure model theorised by Marx in Capital. Contrary to many bourgeois economists who argue that Marx’s Capital was only relevant in the nineteenth century, Harvey argues that it is the most relevant theoretical text for understanding the totality of capitalist society. There is sometimes a tendency for Marxists to focus only on the first volume of Capital, while ignoring volumes two and three or only making isolated references to them. This was the case with Althusser, who in Reading Capital makes his arguments through an analysis of some passages in the first volume, despite his suggestion that Marxists carefully study all three volumes. One of the strengths of Harvey’s approach to Marx is that he discusses his economic doctrine with reference to all three volumes of Capital and the Grundrisse. Although Marx never finished volumes two and three, Harvey views them as essential to grasping capitalist circulation, the service industry, housing and rent, and modern finance capital. Harvey thinks that this approach allows us to analyse the totality of capitalist social relations as opposed to only the domain of the capitalist production of surplus value.

In his first chapter, Harvey examines the capitalist totality with a helpful graph, which illustrates the relationship between capitalist production, the circulation of of capital, and the distribution of surplus value. It helps us to see how every branch of the capitalist totality is interrelated, and how a problem in one sphere will impact all the other spheres. For example, if there is a crisis in the circulation of commodities, then this will halt the production of surplus-value, as the capital needed for social reproduction will be lacking. This could result from a truck-drivers strike or industrial action by warehouse workers, which both stop the flow of commodities and stop the realisation of the surplus value contained in them. Historically, socialist groups have made serious mistakes when they only tried to organise workers who produce physical goods, while ignoring warehouse workers, truck drivers, and other workers involved in the circulation of commodities. This was the case with the American Socialist Workers Party, who in the 1980’s ‘turned towards industry’ because they believed point-of-production workers were the only sector of the working class worth organising. They thereby neglected service workers, public sector employees, and isolated themselves from the larger trade union movement. Harvey’s graph is helpful in formulating a political strategy, as it helps us to see that it is important to organise the entire working class as opposed to merely one sector of it. His analysis makes clear that socialists are needed both in the production of physical goods and the circulation of commodities, as these branches are connected and have effects on each other.

The graph is further developed in later chapters, where Harvey discusses the way in which surplus value is distributed in a social formation through wages, taxes (the state), merchant capital (retail), landlords, and banks. Harvey points out that the capitalist state appropriates a part of a capitalist’s surplus-value in the form of a tax in order to stimulate demand for goods. This is helpful because it can add a layer of theoretical depth to debates around tax policy and the use of public funds. First, it explains why some sectors of the bourgeoisie, such as the executives of large clothing companies, are often fiercely opposed to paying taxes. Instead of paying taxes, this sector of the bourgeoisie would rather invest the surplus-value into advertising and privately stimulate demand for their goods. Second, Harvey can help us to perceive why some sectors of the bourgeoisie, such as the CEO’s of arms-producers like BAE Systems, might support higher taxes. The state could use taxes to purchase their goods, which can then help this sector of the capitalist class to absorb surplus value contained in their goods. For example, the capitalist state might use a larger portion of taxes on defence spending, which then makes the state an important client in the realisation of surplus-value contained in arms, warships, and other military goods. As Harvey points out, the state helps to stimulate effective demand ‘in seeking to procure military equipment, all sorts of means of surveillance, management and bureaucratic administration’ (16).

In chapter four, Harvey engages with an important debate in Italian autonomist theory to analyse the concept of anti-value. Harvey points out that ‘value in Marx exists only in relation to anti-value’ (73). Whenever a capitalist has a large stock of commodities, their capital is temporary negated and exists as anti-value. This could be a stock of goods waiting to be sold, or goods stored in the warehouse of merchant because it cannot be sold. Harvey points out that this devaluation of the commodity can create an economic crisis, so that capitalists are permanently struggling against a potential negation of value. This is reflected through their high investment in advertising to stimulate demand, which is just as important as the production of value. Harvey uses the concept of anti-value to illustrate the multiple ways in which people can resist the bourgeoisie. First, by blocking the realisation of value and devaluing the commodity, a consumer boycott can inflict damage to the bourgeoisie. Harvey notes that boycotts are rarely successful, but may be a good strategy when it is oriented to a strike action. He points out that the working class is the embodiment of anti-value, for the refusal of work is the ultimate act of devaluation. When workers negate value by going on strike, members of the community might support them by boycotting the product in order to further devalue the commodity. Harvey’s beautiful graph of the cycle of surplus-value is essentially a map that traces both the valorisation of the commodity, as well as possibilities for its devaluation and negation.

In the last chapter, Harvey examines the irrationality of capitalism with his concept of ‘the madness of economic reason’. Each of the spheres of the capitalist totality, from capitalist accumulation to the consumption of commodities, are subject to irrational madness. To analyse this, Harvey utilises Hegel’s theory of bad infinity, which is an infinity that surpasses all human knowledge. According to Harvey, ‘contemporary capitalism is locked into the bad infinity of endless accumulation and compound growth’ (173). Despite periodic crises, capitalist accumulation can proceed infinitely, with money-quantities that are humanly impossible to conceptualise. This economic madness is not just connected to accumulation, but also to consumption, which is taken to excesses that result in severe health problems, environmental destruction, and toxic individualism. The irrationality of capitalism is most clearly reflected in the financial sector, where it appears that a monetary investment magically breeds more value simply by circulating. The result of this bad infinity is not endless growth, but the devaluation of the mass of surplus-value during a crisis, and the generalisation of anti-value. Harvey highlights that bourgeois economics refuses to acknowledge the bad infinity of capitalist accumulation, as this would require them to address the irrational contradictions of capitalism. As Sweezy and Baran pointed out over fifty ago in Monopoly Capital, these irrational contradictions cannot be resolved by the capitalist system, but require a socialist, rationally planned economy that puts an end to the value-form. Besides a few references to the Paris Commune and a critique of Chinese socialism, Harvey does not discuss socialist planning, and how a future socialist society might address problems of circulation. This is unfortunate, as it would have been very interesting to see how Harvey would have illustrated the cycle of social reproduction in a socialist society.

I found Marx, Capital, and the Madness of Economic Reason to be a very helpful commentary on some of the main topics and debates in Marxian economics. Harvey’s ability to take an extremely complex body of theory and transform it into a graph helps us to visualise the capitalist totality. Although Marx, Capital, and the Madness of Economic Reason is highly introductory, the book’s multiple graphs and figures will be of interest to those who are well-read in Marxist theory. The level of clarity in his exposition also makes this an excellent introductory text for study groups on Capital or undergraduate courses on Marxian economics.