Marx & Philosophy Review of BooksReviews‘A Happy Future is a Thing of the Past: The Greek Crisis and Other Disasters’ by Pavlos Roufos reviewed by Ross Wolfe 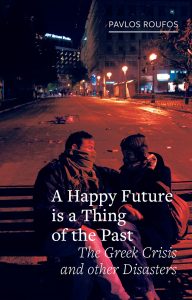 Pavlos Roufos
A Happy Future is a Thing of the Past: The Greek Crisis and Other Disasters

Ross Wolfe is a writer, historian, and architecture critic living in New York. …

Seldom do Marxian analyses weave together politics and economics as seamlessly as Pavlos Roufos in A Happy Future is a Thing of the Past: The Greek Crisis and Other Disasters. Even less often do they manage to pull this off without invoking the authority of Marx, whose name does not appear once in over two hundred pages. Yet Roufos is a Marxist through and through, a fact made clear not just by his abiding concerns but by his casual reference to Hegel and Feuerbach (two thinkers dear to Marx’s heart) as well as to the dialectic of struggles.

As the second title in the Field Notes series, published in conjunction with The Brooklyn Rail under the editorship of Paul Mattick, A Happy Future is a Thing of the Past explores present social conditions with an eye to their revolutionary transformation. The first half of the book is dedicated to a sketch of the postwar history of Greece vis-à-vis developments in global capitalism, while the second half details the movements that arose in response to the sovereign debt crisis. In the former, Roufos interrogates the shift from Keynesian to monetarist policies over the decades; in the latter, he recalls the fury of Syntagma Square and its electoral recuperation in Syriza.

Roufos’ command of the economic data is virtuosic. Making the dismal science (as Carlyle famously dubbed it) exciting to nonspecialists is no small task, but he works figures and statistics into his narrative without skipping a beat. Sometimes the acronyms can be a bit difficult to keep track of – EFSF, LTRO, VAT, TARP, ESM, OMT, to name just a few – but the argument is easy enough to follow. Perhaps a glossary would have been helpful for laypeople to memorize all the commissions, memoranda, treaties and agreements. Nevertheless, the very accumulation of technical jargon adds to the sense of pervasive confusion and suffocating bureaucracy around this issue, as rival governing bodies at different levels of authority jockeyed for position and came into conflict.

From a geopolitical standpoint, Europe and the United States are far and away the most important to Greek affairs. Although connected with the broader international division of labour, its tiny economy prevents it from dealing directly with the rest of the world. Usually any access is mediated by European markets. During the period that immediately followed World War II, reconstruction took place across the continent via the Marshall Plan (outside the Eastern Bloc, of course). Keynesianism came to Greece later than it did everywhere else, only implemented by various parties after the downfall of the military junta that ruled from 1967 to 1974. This same relative delay would be repeated with the sudden shift by PASOK to monetarism near the end of the eighties.

Parts of A Happy Future is a Thing of the Past could be reworked into a general overview of capitalist policymaking since 1945, but Roufos is always attentive to the peculiarities of Greek development. He links the US housing crash of 2008 to the exposure of national banks throughout the Eurozone, which were stuck with toxic assets left over from the subprime mortgage debacle. Because of their exposure, an effort was made to offload some of the financial burden to more peripheral economies like Greece. Various reporting irregularities and statistical anomalies in the 2010 budget made it a convenient target for neoliberal austerity rhetoric, as experts blamed discrepancies on pathological laziness and profligate habits among ordinary Greeks and their elected officials.

Without denying administrative incompetence or endemic corruption, Roufos deftly debunks such myths by pointing out that other EU member states were just as guilty and ran similar deficits. Greece was hardly the only Mediterranean country in this situation. Nor were these problems limited to the so-called Southern “PIGS” – Portugal, Italy, Greece, Spain – as Northern nations such as Ireland and Belgium now found themselves in the same boat. Roufos thus exposes the dominant discourse around ‘lazy Southerners’ as nothing but a ‘moralistic fairy tale’ (114).

Despite this, enough of the public was convinced Greece was in breach of its obligations that fears of economic isolation began to take hold. If the government failed to make good on outstanding debts, the country might be cut off from continental markets. For many, this was a sort of doomsday scenario to be avoided at all costs. To prevent default, the Greek state was forced to accept massive loans that would include strict oversight as part of the terms of repayment. A “Troika” consisting of the European Commission, European Central Bank, and International Monetary Fund was thereby able to impose a fiscal haircut featuring cutbacks, wage freezes, and layoffs.

Of course, not everyone took kindly to such preventative measures. In his treatment of the ensuing unrest, Roufos paraphrases The Eighteenth Brumaire on the temporality of struggles. ‘Social movements are not only confronted by external enemies,’ he declares. ‘Within their ranks, an unequal dialectic is fought in which the past sets its own limits on the future […] But this does not stem from some inherent, ahistorical conservatism; it just reflects the fact that overcoming what already exists necessarily involves a leap into the unknown. [Here] the ability of social movements to enforce the permanent domination of the past by the present remains their most important task’(105). Meditating on the movement of squares may seem old hat nowadays, but lines like these are timely.

Years after Syntagma and associated occupations, the limits of this tactic appear with greater clarity than they did in the heat of the moment. Roufos is sober and unsentimental about these shortcomings, particularly the square movement’s failure to challenge existing institutions or provide a real alternative. Nothing like dual power ever emerged; at most it was ‘an experiment […] played out in a parallel world, one that proclaimed indifference towards established structures and mediations.’ Though appreciative of the “rupture” it represented, Roufos maintains ‘the movement was unable to recognize that, unless such structures and mediations are practically abolished, it cannot escape their clutches’ (106). At times, the informal networks that sprouted up (volunteer clinics, local credit cooperatives) were merely stopgaps replacing rescinded vital
services and banking mechanisms.

Unquestionably, A Happy Future is a Thing of the Past marks an advance in this respect over previous volumes like Revolt and Crisis in Greece: Between a Present Yet to Pass and a Future Yet to Come, an essay collection released in 2011. Written amidst the upheaval taking place in Athens, excellent contributions by groups such as TPTG occasionally succumbed to the immediacy of that which was unfolding before them in the squares. Praising the ‘spontaneous and uncontrolled character of the rebellion,’ (Vradis and Dalakoglou 2011: 118) otherwise insightful pieces mistook this disorganization for a sign of its proletarian bona fides. Less swayed by the constant ebb and flow of events, and with the benefit of hindsight, Roufos is able to show how quickly sporadic outpourings of militancy can exhaust themselves.

However, he retains a healthy skepticism toward the effort of various leftwing parties to mold the movement to fit their pregiven agendas. In a brilliant subsection entitled “Who’s Afraid of Antipolitics?”, Roufos upbraids an early attempt by Syriza apparatchiks to artificially insert themselves into the life of Syntagma. Completely out of sync with the pitch and tenor of the crowd, they endeavored to set the tone for future political discussions by setting up ‘one of the most boring spectacles in the brief history of the square’ (101). Most onlookers felt indifferent to it, and simply dispersed after speakers began lecturing them for hours. Only later, once the squares had been cleared by tear gas and heavy police repression, did Syriza start to get a wider hearing among the populace.

Especially poignant, in the current context, is Roufos’ reflection on the rise of Alexis Tsipras & Co. in 2015. If ultraleft enthusiasm for images of street clashes (“riot porn”) coming out of Greece in 2012 was embarrassing at times, the mindless hype around Syriza in social-democratic outlets such as Jacobin was far worse. ‘[V]arious left (and even radical left) groups, parties and organizations around the world [were] salivating over the announced end of austerity,’ (139) Roufos notes. Riding a wave of popular support, the “coalition of the left” would be swept into office in January of that year. Yanis Varoufakis, a renowned economist and outspoken critic of the Troika, was immediately appointed finance minister.

But the promised change of course never materialized. Quite the contrary: what has happened in the intervening years is roughly the same as that which preceded. ‘Syriza has proven more resilient in implementing austerity,’ writes Roufos, ‘even in areas that all previous authorities avoided or miserably failed’ (156). Following a series of failed debt renegotiations with the Troika – Varoufakis was naïve enough to believe they’d see the error of their ways – Tsipras called a referendum to decide whether Greece would remain in the EU or leave. Today everyone knows this was a bluff, but at the time it seemed a bold move. Just weeks later, however, when Greeks unexpectedly and overwhelmingly voted to leave, Tsipras chose to ignore the results and carry on as usual.

Varoufakis resigned, taking a rare stand on principle, whereas his colleagues acted as if nothing had occurred. Ironically, the Left in power is often capable of pushing through regressive legislation without any pushback from the working class. Roufos foreshadows this early in the book, discussing the socialist president François Mitterand of France during the 1980s: ‘Using the excuse of battling against France’s potential isolation from the European Community, Mitterrand’s Left government embraced monetarist dogma, [g]iving credence to the notion that the Left is quite often more capable of defending the capitalist economy than the Right’ (33). At least in the case of Syriza, there can be little doubt this is true.

Though short on answers, A Happy Future is a Thing of the Past asks the right questions about what befell Greece since 2010. One need look no further for a comprehensive guide to the catastrophe of the present. It is quite fitting that Roufos does not offer positive prescriptions or readymade blueprints; for Marxists, these can only be revealed through practice.