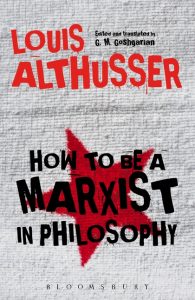 Louis Althusser
How to be a Marxist in Philosophy

How could it have been that the outside of Plato’s academy called not for the brightest and best philosophers to join its ranks, but geometers (129)? In a contemporary context: why is it that an increasing number of philosophers take the formal axioms of set theory as philosophical fundaments without subjecting them to critique? Such examples are exemplary of the question set out within How to be a Marxist in Philosophy: why do certain assumptions, taken from outside the discipline of philosophy, ground its inquiry, and what are the results of this dislocation from one another? One thesis in response to this question — philosophical practice, for Althusser, creates theses in response to questions, as opposed to the solutions to the problems posed by science (21, 35) —, might be because, in the language of both Aristotle and Alain Badiou, mathematics is the language of ‘being qua being,’ and only mathematics expresses the primary qualities of things (Aristotle 1981; Badiou 2011). To presume such a foundation however, for Althusser, would be to ignore the benefits accrued by those who advocate, in this case, the primacy of mathematics and reproduce the relations of production of knowledge. Grounding ontology upon any discourse that exists outside it is, for Althusser, a capitulation to a particular set of interests that are served by, in the example of Plato, geometry (138). The production of knowledge, even in the academy Althusser insists, is much more political than we realise (117).

In making this claim, Althusser splits philosophy in two unequal parts: first is the majority of idealists who, through their quietist acceptance of their relation to socio-political power and an unwillingness to investigate what is at stake in upholding a certain set of objective and universal ‘facts,’ wed themselves to dominant political classes and propagate the conditions of their ideological suppression (33). The second, materialists, are characterised as those philosophers who, because they realise that philosophy is not science (i.e. that it advances theses in response to local questions and does not claim universal validity in its concepts), declares war against the totalising pretensions of the first (49). In foregrounding the social conditions, relations of power and ideological struggle that contextualise our accounts of the world, Althusser pits the abstraction of idealism — a philosophy that he argues repeatedly builds theoretical Towers of Babel upon the rubble of the old (27) — against an atheistic materialism — the philosophy of the Marxist philosopher — which tears down these mythic constructions in order to better understand concrete social practices and where they exhibit (135).

There are at least two significant ways in which How to be a Marxist in Philosophy is an important addition to Althusser’s oeuvre, much of which still remains unpublished. First, in his insistence that the functions of science and philosophy are different, and that idealists are complicit in the operation of state power when they attempt the latter, Althusser provides here a powerful rejoinder to the recent upsurge of indifferential philosophy, who deterritorialise the language of set theory from its origins in mathematics into disciplines as far removed as ontology (Badiou, Meillassoux) and literature (Watkin). Pulling no punches, Althusser is clear that when philosophers talk about the ‘order of orders’ — and here he even name-checks Badiou’s appropriation of set theory four years before the publication of Being and Event (2011) — they ‘also talk about authority, and therefore about power: and since there is no power but established power, that of the ruling class, they plainly serve its power, even if they are unaware of it and especially if they think they are combatting it’ (33-4). Whilst such authors are unlikely to be swayed by his argument, focused as they are on particular ideas that have emerged within the history of thought, this is precisely Althusser’s point: by not taking into account the socio-political role of both their work and the assumptions it maintains, and its relationship to the relations of state power, they are unknowingly complicit with the latter (136-8).

Secondly, and importantly for Althusser scholars who focus on the cohesion of his work, this book also marks the completion of a task he set out 18 years before its publication. In 1966, Althusser sent the first of three Notes to his colleagues in the Theoretical Working Group on Spinoza (Alain Badiou, Étienne Balibar, Yves Duroux and Pierre Macherey, amongst others), in which he outlined a project to establish the relationships of constitution and reproduction of the four discourses comprising the social formation: science, ideology, philosophy and art (Althusser and Matheron 2003: 34-35). Rather than remaining axiomatically distinct from each other (qua Badiou), each discourse, Althusser suggested, expresses objects in a particular manner, but in a manner that doesn’t preclude other discourses from expressing objects in different, potentially both productive and problematic, ways. To take an example from his first Note, the manner in which the concept ‘subject’ is used in science is different, and has different implications, then when it is used in an ideological context, and productive (materialist) philosophical analysis would draw out and clarify these differences (Ibid: 48). In How to be a Marxist in Philosophy, Althusser makes his most systematic account of, first, how this is the case and, secondly, why it is that materialist philosophy is tasked with understanding, demystifying and expressing the relationship between these discourses.

This demystification is, for Althusser, not without its political ramifications and, as ‘struggle in theory’ and constituting ‘acts of war,’ materialist philosophical practice is not simply the process of bringing to bear the teachings of just another philosophical truth against idealism (39). Rather, it is the fight to re-appropriate ideas away from any dominant ideology that claims it can provide the key to truth (39, 113, 117). In this manner, one can be a Marxist in philosophy by allying oneself with the fight against the state’s appropriation of the production of knowledge, and idealism as its tool of doing so. As he has emphasised elsewhere, Goshgarian (2016: 5), Althusser’s long-time and adroitly critical translator, points out, in a highly useful introduction to the text, that the relationship between Althusser’s elaboration of Marxist philosophy and the dictatorship of the proletariat is clear (xxv). Everyone, for Althusser, is accordingly a philosopher, but not necessarily with the language of the philosophers which they may not know, and Marxist philosophy is important because, before Marx, ‘philosophy may be said to have played its role without being aware of the conditions determining it: to have played its role blindly’ (141). Marxist philosophers are therefore important in disrupting the cosy associations between philosophy’s assumed presuppositions and statist ideology, and they do this to help (everyone) ‘invent new forms of community that would make the state superfluous’ (xxix).

Whilst Althusser’s book is important for at least these two reasons (with Goshgarian’s introductory contextualisation and commentary being a third), this is not to say the book is an easy read. The book’s no fewer than 26 chapters bear no relationship to its contents, which reads instead like a matrix of the book’s key ideas linked together with brackets and arrows, and at least 13 instances of putting off discussion to a later point in the book (or indeed another book entirely) becomes grating. Occasionally, Althusser’s tone veers from that of a highly principled academic to that with which your old friend might use over a coffee, and it becomes unclear for whom Althusser intended this book (83). Compounding this ambiguity is the discursive manner with which Althusser addresses this history of thought: his evidently compendious knowledge is often glossed in the manner a friendly Master might use with the children under his care, and readers may be unconvinced by his assertions. How to be a Marxist in Philosophy lacks therefore the persuasive tone of works such as Reading Capital (1970) and Philosophy and the Spontaneous Philosophy of the Scientists (2011), though Althusser’s tour through the history of both key ideas and thinkers is nevertheless enlightening if the reader approaches this book generously.

This tour is embarked upon following an initial seven chapters that distinguish idealism from materialism. Althusser uses this distinction to claim that, whilst idealists follow scientists in their question the entrap the world within one-or-another totalising frameworks, ‘only materialist philosophers are revolutionaries, as they are creators’ (38). The idea of creation is not developed explicitly elsewhere, however it underpins his argument that materialist philosophy poses theses which are born out in practice (whereas idealism relies upon the logical consistency of its hypotheses for it to be called ‘correct’) (41-40). The tour then comprises chapters eight-twenty, associating the core philosophical ideas (truth (41); subject/object (46, 76, 91); epistemology/ontology (55, 75); law and rights (100, 103); theory/practice (112) and key figures in their development with either the idealist or materialist camp (113-4). The final four chapters outline four key theses of materialist philosophy in Althusser’s description, and develop the allegiance of materialist philosophy to both class struggle and Marxism as its call to arms (143). These latter chapters are the most engaging and instructive of all, capturing Althusser’s political zeal into a powerful socio-political critique of the relations of the production of knowledge. If there can ‘be no practice that is not under the domination of an ideology,’ and this includes philosophical practice, then even philosophical practice is ‘a question […] of maintaining or capturing state power and the state apparatuses and […] of controlling and orienting the different practices as a function of the class antagonism that divides society into classes’ (132).