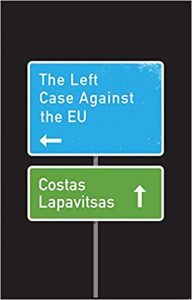 Costas Lapavitsas
The Left Case Against the EU

I attended a book launch of The Left Case Against the EU in London at the end of 2018. The event brought together an impressive panel of Grace Blakeley (New Statesman Economics Editor), Larry Elliott (Guardian Economics Editor) and Chris Bickerton (Cambridge), all of whom heaped praise on Lapavitsas’ book. The launch was chaired by an equally ingratiated Aaron Bastani (Novara Media), and Costas Lapavitsas himself gave a passionate, fiery monologue. There was a real enthusiasm and vigour to the affair, all seats were taken, people were queuing out the door and a forest of hands arose when it came to the Q and A. There was an anteroom where the discussion was pipped in for the fifty to sixty attendees who simply could not fit into the main event. When I came to opening the book, I thus had rather high expectations. Sadly, these were to be a little disappointed.

Lapavitsas does not present the left case against the EU. Rather, a more accurate title would have been: Former SYRIZA MP and esteemed Marxist economist angrily argues that the EU is neoliberal. Demonstrating this unfortunate reality in black and white, in quantitative and qualitative terms, is admittedly an important task, and one which Lapavitsas does with confidence and flair. Yet arguing this thesis alone does not make his publication a left case for leaving the EU, a call which Lapavitsas repeatedly asserts. To merit this weightier appellation Lapavitsas needs to do more; he would need to get involved in the uncertainties and messy realities of secessionist debates. To justify Lapavistas’ consistent call for secession, the question to be asked is not simply ‘Is the EU neoliberal?’ to which we all know the answer. The real question, the harder question, is: ‘Is progressive politics, and the possibility for socialist transition furthered by withdrawal from the European Union?’ While Lapavitsas comes close to engaging with this question in places, particularly towards the end of the book, there is no consistent argumentation on this more pressing and complex dilemma. Ultimately the argument presented in this book is rather simple: that the EU is irredeemably neoliberal, therefore left politics should embrace secession. But this submission is offered without consideration of the myriad complexities which make discussions around Brexit far more angst-ridden for those of us on the left. Lapavistas cannot simply move from thesis one, that ‘the EU is irredeemably neoliberal’ to thesis two, ‘socialist transition is furthered by secession’, without a thorough interrogation of broader socio-political realities. Ultimately, it is this larger examination that complicates, and often thwarts, ‘Lexit’ arguments. This review submits that while the majority of Lapavitsas’ book is sound – he does present a strong case for the EU being built on inveterately neoliberal foundations – he does not succeed in making a left case against EU membership, which is a more complex endeavour.

The manuscript itself is divided into six (very) short chapters. Chapter 1, ‘The European Union and the Left’, offers a brief and somewhat reductive summary of the left’s shifting attitude to Europe over the past fifty years. Chapter 2, ‘The Evolution of the EU: From Maastricht to Now’ is meatier. It commences with an intriguing analysis of Hayek’s predictions on the prospects for European federalist integration. Hayek himself was explicit: European economic integration would almost seamlessly lead to neoliberalism. Lapavitsas is keen to distance his reading from Hayek’s, while drawing out similarities. For Lapavitas, the EU is best considered a ‘transnational juggernaut haphazardly thrown together and rolling in a neoliberal direction’ (19). In the messiness of political reality there is none of the clarity and uniformity of Hayek’s projection.

Chapter 2 is also noteworthy in that it marks the commencement proper of one of Lapavitsas’ core theses: that the current formation of the EU is best explained as an outcome of the ‘hegemonic ascendancy of Germany’ (21). Indeed, Lapavitsas’ claim is even more targeted, that the development of the EU can be charted by following the interests of German export capital. This claim is presented with lucidity and incision, from the European Monetary System through to the latest developments of the Eurozone Crisis (23-32). There is some clear, detailed and impressive argumentation here, which is to be commended.

Chapter 3, ‘The Ascendancy of Germany and the Division of Europe’, draws out these thematics in greater detail. Lapavitsas explains how the development of German hegemony was borne out of the defeat of German labour in the 1990s (45-49). This section is supported by extensive quantitative analysis, with various graphical representations drawing out particular developments. Having established the neoliberal foundations of the EU, and the dominance of German export capital at the expense of German labour in chapters 1-3, chapters 4 and 5 demonstrate the neoliberal animus driving EU policy over the past decade.

Chapter 4, ‘The Eurozone Crisis: Class Interests and Hegemonic Power’, and chapter 5, ‘Greece in the Iron Trap of the Euro’, draw out how the Euro and ‘conditionality’ further the EU’s neoliberal agenda. Lapavitsas explains how ‘conditionality’ is the attachment of clear conditions that must be met for countries to be given loans. He demonstrates how these conditions invariably served to benefit capital over labour, and ‘helped impose a neoliberal policy agenda’ (69). For Lapavitsas, the situation where the southern, peripheral states of the Union were left at the mercy of the neoliberal German ‘core’, capable of asserting its interests via such ‘conditionality’, can be traced to the existence of the common currency. Normally a ‘sudden stop’ crisis would precipitate a currency devaluation, enabling, amongst other results, increased exports and, hopefully, the slow return to equilibrium. In contrast, due to the logics of the common currency, the southern periphery was forced to accept the neoliberal diktats of the ‘unelected and largely unaccountable’ Troika (71); with the inability to devalue their currency they were left without real sovereignty, forced to accept neoliberal policies which were predictably self-defeating. Ultimately, conditionality led to a ‘collapse of aggregate demand’, ‘huge unemployment’ and ‘poverty’ (80). In Lapavitsas’ analysis, three themes are central: first, that ‘the proximate cause of the Greek disaster was the euro’ (85), second, that ‘the deeper source of the problem for the Eurozone as a whole was German domestic policy’ (85) and third, the conditionality attached to the Troika bailouts was ‘brazen’ ‘blackmail’ (91).

The concluding sixth chapter, ‘Seeking Democracy, Sovereignty, and Socialism’, comes closest to engaging with the complex realities of secessionist debates. Here one finds passing discussion on some of the other arguments surrounding the EU which dominate popular discourse: immigration, the refugee crisis, the democratic deficit and the possibility of ‘rupture’ (131). Perhaps the most intriguing passage of the text appears as Lapavitsas builds towards his conclusion, where he states that,‘[t]he Left has become increasingly cut off from its historic constituency, the workers and the poor of Europe, who have naturally sought a political voice elsewhere’ (129).

Yet, returning to the core problem with Lapavitsas’ book, that the ‘workers and the poor of Europe’ (129) have turned to anti-European parties does not in itself mean that their interests are best served by secession. Indeed, one might argue that the sudden rise of UKIP, and its immediate collapse, can be explained by both the EU referendum itself, but also by the ascent of Corbyn to the Labour Party. The presence of a genuinely socialist party has led to the ‘historic constituency of the Left’ (Ibid) slowly returning. One may view a similar dynamic at work in the US, where the triumph of Clinton over Sanders contributed to the rise of Trump. For the American precariat it was Bernie or Bust, and for the British precariat Blairism led to Brexit. The absence of a credible socialist alternative has surely been an important factor in the rise of the populist right, a consideration from which Lapavitsas shies away.

Lapavitsas’ book is overwhelmingly successful as an indictment of the EU as a neoliberal organisation, dominated by the conditional hegemony of German financial and export capital. Yet this analysis alone is not enough to lead to Lapavitsas’ battle cry: total secession. As stated, for such a claim to be justified Lapavitsas would need to demonstrate that secession, in the current conjecture, would be a force for progressive transition. Yet, where he does prescribe the future requirements for such a progressive development, the recipe seems wildly unrealistic under neoliberal executives. While it ‘makes sense in several European countries to raise wages as a means of supporting aggregate demand’ (133), and for ‘Germany … to wean itself from its destructive neo-mercantalism’ (133), in the words of David Ruffin, ‘that ain’t never gonna happen’ under the tyranny of three ‘Ms’: May, Merkel and Macron.

Sadly, the UK and increasing swathes of Europe and the globe are dominated by neoliberal and racist politics. A country does not simply inform its MEPs to vacate the European Parliament, burn all copies of the acquis communautaire and saunter into social democracy. I write this on the eve of the ‘Meaningful Vote’ on May’s Brexit deal. The UK’s withdrawal from the EU has been orchestrated by a fractious Conservative Party responsible for the imposition of a politically driven austerity programme which has done unconscionable harm to the nation’s poorest and most vulnerable. Loud voices within the Conservative Party would be delighted to see the UK adopt a Singapore style economic model. One must thus question Lapavitsas on his own terms: perhaps leaving the European Union, under the current Conservative executive, would do more to further neoliberal economics than to thwart it. Questions of the broader ascendancy of populist, racializing and neo-imperial imaginations are absent from the book. Ultimately, Lapavitsas is convincing that neoliberal imperatives dominate EU policy, but the book fails to provide a left case for secession from the European Union. There is not even a consideration that progressives who follow Lapavitsas may be jumping out of the neoliberal frying pan of the EU and into the authoritarian, racist neoliberal fire of unknown and terrifying dimensions.