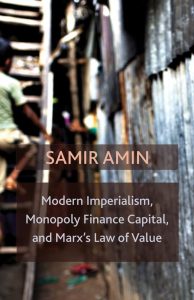 Last August, the world lost a great Marxist theorist, Samir Amin. Amin was politically engaged throughout his life, worked in planning agencies in Mali and Senegal, and contributed to the theoretical elaboration of Marxist theory. Amin published dozens of books that cover a wide range of topics, including, amongst other topics: Marx’s theory of value, imperialism, the history of the global South, and Maoism. Although his writings are very accessible, one might find it difficult to begin a study of his writings. Monthly Review has recently published the definitive one-volume anthology of Amin’s writings Modern Imperialism, Modern Finance Capital, and Marx’s Law of Value. This fabulous collection contains the complete text of the Law of Worldwide Value and Essays on Marx’s Value Theory, as well as an essay on the contemporary relevance of Marx’s Capital. These three texts are an excellent introduction to Amin’s thought.

Amin originally developed the ideas for The Law of Worldwide Value in the late seventies in the Law of Value and Historical Materialism and Unequal Development. They were part of debates taking place between Paul Sweezy, Paul Baran, Arighiri Emmanuel, as well as Maoist political organisations. The Law of Worldwide Value is an updated version of these books and applies their basic theoretical formulation to contemporary capitalism. One of Amin’s main arguments is that Marx’s theory of value is foundational to historical materialism, but that it must be adjusted to account for the globalisation of the value-form. Recall that for Marx, the value of a commodity is determined by the time on average it takes to produce it within a historically determinate set of conditions (i.e. technological level, state of science, development of the productive forces). The competition between many isolated capitalists forces an average social value to emerge, which determines the prices of commodities. During Marx’s time, only a few countries had undergone a bourgeois revolution and fully established a capitalist mode of production. Therefore, the law of value only operated in some European social formations, as well as the United States and a few Asian countries such as Japan. Although most African and Latin American countries were dominated by the major capitalist countries, they still had pre-capitalist modes of production and therefore were not regulated by the law of value. Amin points out that the capitalist mode of production has today been globalised, resulting in the globalisation of the law of value. The value of commodities is therefore not dependent on the national social formation in which a capitalist mode of production is operative, but the international capitalist market.

For Amin, global capitalism is divided into the imperialist nations of the centre, and the oppressed nations in the periphery. Although there is a global law of value, there is an unequal exchange between the nations in the periphery and the centre. The peripheral nations in the South, such as Tanzania and Colombia, produce goods that are exported to the nations in the North, such as the United States and Great Britain. According to Amin, the value of a commodity produced in the South is the same as in the North, which exercises a determinant function on global prices. However, this does not mean that both receive an equal benefit because a structure of unequal exchange is operative between them. The imperialist nations appropriate the products of the working people in the oppressed nations by exploiting this structure of inequality. Unequal exchange results in perpetual underdevelopment in the South, even when some countries such as Zambia or Angola experience economic “growth”. They remain underdeveloped because they are unable to reinvest the economic surplus into their own national development and must accept trade contracts written by the imperialist countries. Amin shows that the people who suffer the most from unequal exchange are the working people of the global South. He says that “though there exists but one sole labor-power on the scale of globalized capitalism, that labor-power is recompensed at very different rates” (84). Workers in the peripheral nations receive a much lower-wage for the same labour as workers in the imperialist centre. In Essays on Marx’s Value Theory, Amin conceptualises this with his notion of “imperialist rent”, which demonstrates how the surplus value produced in the periphery goes to benefit the people of the imperialist countries. Although Marx wrote Capital in an earlier stage of capitalism, Amin argues that we must study it in order to grasp the way that the law of value structures imperialist rent and unequal exchange.

Because there exists a structure of unequal exchange, Amin says that the principle contradiction in contemporary capitalism is “the one that counterposes the peoples of the periphery (the proletariat and the exploited peasantry) to imperialist capital and not, of course, the periphery as a whole to the center as a whole” (93).For Amin, every defeat of imperialism in the periphery benefits working people across the world and puts it in a better position to fight for a socialist revolution. Politically, this line is helpful for three reasons. First, it thoroughly grounds politics on a class analysis and allows for the creation of class solidarity between the workers in the centre and the periphery. Workers in the imperialist countries can do this by supporting national liberation movements and anti-imperialist governments, which significantly weaken imperialism and free the people of the South from capitalism. Second, Amin’s formulation is helpful because it can be used to criticise narrow nationalist and Third Worldist theories, which claim that the principle contradiction is between the whole center and the whole periphery. Such theories prevent the development of proletarian internationalism by putting the working people of the imperialist countries against the workers of the peripheral nations. Third, Amin helps us shed illusions about the progressiveness of the national bourgeoisie, which historically have betrayed the working class after a successful national democratic revolution. Although the national bourgeoisie can be brought into a united front with the working class, it has usually prevented the people of the periphery from disengaging from capitalism.

In the last chapter of The Law of Worldwide Value, Amin includes an interesting discussion of the history of anti-imperialism, and how his own theoretical formulations are derived from debates within these movements. Important debates about anti-imperialism emerged with the Zhdanov Report, in which Soviet leaders developed the theory of peaceful coexistence between imperialism and socialism, and the theory of non-capitalist development. Under the leadership of Nikita Khrushchev, the Soviet Union agreed that it would not interfere in liberation movements in the colonies, in exchange for peaceful coexistence with the imperialist countries. Furthermore, the Soviet Union viewed newly independent countries lead by the national bourgeoisie, such as Iraq as ‘non-capitalist’ and therefore free from the contradictions of capitalism. Amin argues that this line prevented communists from engaging with the national liberation movements and resulted in uncritical support for anti-imperialist governments. He makes the interesting claim that the non-aligned movement “was the product of a radical leftwing critique that was at that time conducted within communist parties” (123) rather than nationalist leaders such as Nehru, Sukarno, and Nasser. Amin places Mao Tse-Tung, and the communist parties in Egypt, Iraq, the Philippines, and Iran at the center of the non-aligned movement. This was reflected in the basic principle of the non-aligned movement, which held that the people of the periphery could only become free if they embarked on an independent path of socialist construction. This is quite different from someone like Vijay Prashad, who argues in the Darker Nations that the non-aligned movement was an independent project of Third World liberation, with the nationalist leaders at the forefront. The strength of Amin’s analysis is that it allows us to perceive how the work of communists and leftists created the non-aligned movement that began at Bandung in April 1955.

Modern Imperialism, Modern Finance Capital, and Marx’s Law of Value is a great one volume introduction to Amin’s works. It covers all the major themes of his thought and has references to direct the reader to his main texts. Amin’s writings will be of interest to anyone who wants to understand the contemporary dynamics of imperialism, global capital accumulation, and socialist construction in the oppressed nations.