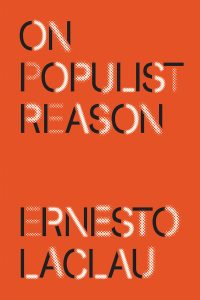 James Hodgson is a Teacher of Economics, and has a Ph.D. in Politics from the University of Yo …

Many now claim that populism is the defining feature of contemporary politics, or at least that we are currently living through “a populist moment”. With the electoral success of Donald Trump in the United States, the election of right-wing populist Jair Bolsonaro to the presidency of Brazil and a multiplicity of similar political developments around the world, populism is undoubtedly now a globally dispersed phenomenon. But what is populism? And what’s wrong with it, anyway? Critics tend to focus on the abundant personality defects of populist politicians, rather than theorise about populism as a political category. The risk here is that populism simply becomes a rather meaningless term of abuse, an umbrella phrase for every bombastic newcomer of whom the established political class disapproves; or else becomes conflated with more primitive strains of ethno-nationalism. We need to be clear, therefore, on what we mean by populism, and not surprisingly the avalanche of invective found in the discourse of contemporary media is not helpful in this task.

However, it turns out that academic writing on politics is of no great help here either. With a few notable exceptions, populism has been systematically neglected in political science and democratic theory. Perhaps this is because, in an increasingly technocratic and broadly “liberal” political order, many academic writers hoped such unbecoming and vaguely unpleasant discourse was a thing of the past. It was simply too embarrassing for genteel liberal philosophy to contemplate such a Bacchus-like creature as Berlusconi, let alone another Mussolini or worse. Obviously, the reports of populism’s demise were greatly exaggerated. Whatever the cause of its historic neglect, academic political theorists, caught like a flock of deer in the headlights, have now belatedly started to redress this oversight. However, not all the writers of what we may now regard (albeit with mixed emotions) as the “pre-populist era” were quite so careless; some did happily dive into the cave of the Cyclops in search of wisdom. If we wish to understand populism free from the current hysteria surrounding Trumpism and Brexit, then we would do well to revisit these texts and see what they have to offer.

One such work is Ernesto Laclau’s On Populist Reason. Originally published in 2005, it has recently been re-released in paperback form. (The publishers no doubt reasoning that if the end truly is nigh, then we might as well understand how we arrived at eating squirrel meat by candlelight.) Laclau himself was a noted Argentine political theorist and was based for many years at the University of Essex. His political thought was in the genre of what might broadly be called post-Marxism or post-structuralism, drawing upon the work of such eminent European philosophers as Saussure, Derrida and Lacan. He was primarily concerned with the analysis of such thorny issues as discourse, identity and hegemony. Perhaps his most enduring work – Hegemony and Socialist Strategy – was co-written with his wife, Chantal Mouffe, the noted theorist of agonistic democracy. On Populist Reason therefore stands in a tradition sensitive to group-based demands for recognition, to social oppression and to complex social psychologies. These sensitivities both inform and propel the book forward.

Laclau’s book is neither a polemic nor a normative argument, but rather an analysis of the concept and practice of populism. It is motivated by Laclau’s suspicion that the dismissal of populism is somehow involved with ‘the dismissal of politics tout court, and the assertion that the management of community is the concern of an administrative power whose source of legitimacy is a proper knowledge of what a “good” community is’ (x). Against this methodological Platonism (the well-spring of a certain tradition of political philosophy), Laclau argues that there is something of the populist logic inherent to any process of social identity formation, thus offering a novel and affirmative take on the concept. Rather than spending his time hunting for the once and future definition of populism, however, his task is instead ‘to show that populism has no referential unity because it is ascribed not to a delimitable phenomena but to a social logic whose effects cut across many phenomena’ (xi). Populism has no definite political programme, therefore, but is a manner of articulating unfulfilled demands and creating solidaristic communities. It is, ‘quite simply, a way of constructing the political’ (xi).

The book is divided into three stages. Though the effect is cumulative, they are relatively self-contained, and the reader can dip in and out of each section at his or her pleasure without losing any of the insights presented. (Indeed, the book is perhaps best read in a non-linear fashion.) The first section introduces the raw intellectual materials through which populism might be analysed, including a brief survey of the existing literature, and forays into the worlds of intellectual history, Gustav Le Bon and the psychology of mass behaviour. The second section goes further in developing the conception of populism, examining such phenomena as chains of equivalences, social heterogeneity and ‘floating signifiers’. In the remaining section, this conception is deployed to make sense of actual existing instances of populist moments, such as Peronist Argentina, Kemal Atatürk’s secularisation of Turkey and the People’s Party of America in the late nineteenth century. He concludes with some reflections on Žižek, Hardt and Negri and Ranciere.

The main takeaway from Laclau’s book is that one must already be familiar with the genre of political theory in which he writes and the thinkers which he touches on. Without such a familiarity, the reader must navigate a particularly dense thicket of technical jargon which can be more than a little frustrating, thus leaving much of the analysis inaccessible to the educated layperson. We are left with a swirling soup of insights, many of which are interesting, though rarely advanced as a comprehensible thesis. Moreover, weighing in at just over two hundred and fifty pages, On Populist Reason is by no means a long book. However, it is certainly heavy-going, even for those with a background in the tradition of analytic philosophy. A dizzying array of names are reeled off, but these authors are not unpacked in a sustained fashion, and the reader must cope with them as best as he or she can. For example, at one moment, Laclau begins to contrast his conception of populism with Jürgen Habermas’s idea of constitutional patriotism (198-199). This would have been a very illuminating discussion, as Habermas’s political interventions have been highly influential in both intellectual and popular debates in contemporary Europe. Once again, however, this contrast is not developed in any detail, and the reader is left wondering what is going on and what might have been. This no doubt presents an obstacle to the book’s longevity and to how it speaks to our current political moment.

This not to condemn the book completely, however. There are insights into the nature of populism to be gleaned for those willing to look. These include the claim that populism ‘never emerges from an absolute outside and advances in such a way that the previous state of affairs dissolves around it but proceeds by articulating fragmented and dislocated demands around a new core’ (177). That is, populism is always internal to the political order (worth remembering in a time of increasing Russophobia) and is the result of some dissatisfaction or unfulfilled demand by the populace. It is Janus-faced in that it has both a subversive face (against the status quo) and a reconstructive face (wishing to construct a new order). We are told that something called a ‘heterogeneity’ (rather than merely textbook pluralism) always has a constitutive role to play in the formation of ‘the people’, and that populism as Laclau conceives it is to do with the underdog, or the plebeian class taking on the role of the people as a whole. This final insight – what might be called the necessary synecdochalism of the populist creed – is especially interesting, but little is done with it.

Despite its manifold flaws, there is still much to admire in the book, however. Indeed, it is at its strongest when it delves into historical examples, and Laclau proves more than capable of taking the reader on a tour of various populist movements and figures throughout history. This in itself is a timely reminder that populism is hardly a creature of the twenty-first century and may be a pillar of the democratic political order itself, though one does not have to sign up to Laclau’s viewpoint to see it that way. Moreover, the comparisons of various strands of populism, such as the differences between Latin America and Eastern Europe, prove particularly illuminating. Populist movements in the former were based on appeals by citizens to the state, in conflict with the corrupt oligarchs and military generals who steered the system for their own advantage. By contrast, populism in Eastern Europe was based much more on ethnic group appeals which had been suppressed under Soviet rule, rather than a common citizenry. Populism is not, therefore, necessarily ethno-nationalist in outlook, and as Laclau puts it ‘there is no possibility of pluralism for ethno-populism” (196). The possibilities for a more progressive and engaging populism do exist, then, if only the political actors existed to aggregate the plurality of demands into a single movement.

In summary, On Populist Reason is a mixed bag. On the one hand, it is highly refreshing to read a book about populism in which it is not cast as the bogeyman du jour. It is a failing of much of the current literature that it does not treat populism in a much more objective or sympathetic manner, seeing it as an illness to be cured or a symptom of a wider malaise, rather than as something necessary to the political or to modern democracy itself. It will be of greatest interest to those fluent in the genre of post-structuralist political thought and well-versed in those continental European thinkers mentioned in this review. For outsiders, its attractions are rather more limited, owing in part to the traditional confines of the continental genre (though it should be noted that Laclau’s prose style is probably the most accessible out of all the writers in that impenetrable crew). We might go so far as to say that contemporary liberal political philosophy had the right method (clarity), but not the right subject; while post-structuralism had the right subject (real politics), but not the right method. That being said, for those brave souls who are willing to make the arduous trek up the magic mountain, there are plenty of interesting vistas to behold.