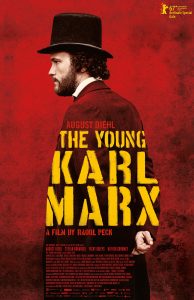 Any film about Karl Marx faces some notable potential difficulties. First, although his life may have been more interesting and varied than those of most philosophers, the interest we have in Marx today stems from his writings: how can a life whose enduring significance ultimately derives from hours sat in libraries reading, thinking and writing be represented in a cinematically engaging way? Second, the nature and content of Marx’s works raises problems of representation, given that its central ‘characters’ are abstract and impersonal forces and individuals, appearing only as personifications of economic categories and bearers of class relations. Finally, these issues of representation are further complicated by the existence of a large body of Marxist film theory, much of which – focused less on the social, political and economic conditions of its production and consumption and more on formal analysis – has insisted that there can be distinctively Marxist forms of cinematography, editing and so forth.

In the sense that he has produced an intelligent, informative and entertaining film, Raoul Peck has skilfully navigated these difficulties. In part, he has done so by offering something relatively formally conventional: although it offers a sympathetic portrayal of Marx, this is not an especially ‘Marxist’ film. Beginning in 1843 with the suppression of the Rheinische Zeitung and ending in 1848, it revolves around the relationship between Marx and Engels. While it is unnecessarily flippant and cliched to describe it as a ‘bromance’ – as have various press reviewers – the film’s basic structure could indeed be described in rom-com terms: the heroes are introduced independently; there is a ‘meet cute’ in which suggestively charged insults are exchanged and mutual antipathy gives way to admiration and devotion; the relationship intensifies but faces obstacles; the obstacles are overcome in a final triumph – though here the triumph is not a declaration of love or proposal of marriage but the publication of the Communist Manifesto. Given that the Manifesto’s authors are its centre of attention, this does tend to be a male-dominated film, though both Jenny Marx and Mary Burns are given significant screen time, and both are shown as intellectual and political partners of Marx and Engels rather than merely as love interests.

The film opens with a bucolic scene of peasants collecting wood in a sun-dappled forest, interrupted by troops on horseback riding in to strike down the wood gatherers; over these images, we hear Marx reading from his 1842 Rheinische Zeitung article on wood theft laws. This may seem an odd place to start a film about Marx: the scene depicts peasants rather than workers, state power and violence rather than ‘the dull compulsion of economic relations’ (Marx, 1996: 726) and, if anything, conjures nostalgia for rural simplicity rather than demands for the overthrow of capitalism. The opening is apt, however, given that we are here dealing with the young Marx and his transformation through the 1840s from radical liberal to revolutionary communist: as Marx himself claimed in the 1859 ‘Preface’, it was precisely episodes like those in the forest – a brutal and direct expression of class power – that first forced him to confront ‘material interests’ (Marx, 1987: 262).

State power is again emphasised in the following scene, this time directly affecting Marx, as the offices of Rheinische Zeitung are raided by police and its writers arrested. Similarly, after meeting in Paris in 1844, Marx and Engels are chased through the streets by government forces (though here the scene is played for comic effect rather than political resonance). In the case of Engels, the struggles against authority take on an Oedipal hue, as he is shown arguing with his factory-owning father and agonising over the contradictions between his social and intellectual positions – ‘A bourgeois actively intervening against the proletariat…. Pushing the communist cause, while working in trade and industry.’ The film gives credit to Engels’ first-hand insights into industrial capitalism and their importance to Marx’s work, as well as suggesting that it was Engels who prompted Marx to read the ‘English economists’. As Marx says to Engels in Paris: ‘Your knowledge of the workers’ world is unrivalled… You know both the workers’ misery and the upper spheres of the bourgeoisie.’

Much of the rest of the film takes place in smoky rooms or dingy backstreets. The focus is on the intellectual and political development of Marx and Engels, but they are not portrayed in idealist fashion as isolated geniuses: they are presented as developing their ideas in collaboration and conflict with others. This may in part have been an aesthetic choice: it is easier to show Marx and Engels squabbling with their contemporaries and rivals than it is to show the act of thinking (though there is one scene of Marx in a library making notes on Ricardo and muttering quietly to himself about price and labour). But it also accurately places the pair in their intellectual milieu (this is likely to be the only film you will ever see in which Max Stirner makes an appearance) and rightly insists on the collective nature of intellectual labour.

Proudhon and Weitling in particular are shown as foils: while the former is criticised for his abstractions, the latter is criticised for his lack of theory, neatly encapsulating Marx and Engels’ attempts to navigate the boundaries between the abstract and the concrete, the ideal and the material, theory and history. Nor is this a hagiographical portrayal: Marx is shown as intelligent, energetic and witty, but also arrogant, confrontational, and moody; it is hinted that his theoretical disagreements with Weitling are mixed with envy at the latter’s ability to enthuse crowds of workers. In contrast to Weitling’s crowd-pleasing homilies, Marx becomes frustrated with his audience and is unafraid to challenge their assumptions. In one of many moments that attempts to illuminates Marx’s ideas – rather than simply his life – Marx responds to a heckler’s claims that ‘There’ll always be bosses and workers’ by shooting back: ‘Saying “there’ll always be” is a bourgeois notion. Capital wants us to think that. But everything moves. Everything is subject to change. Nothing lasts. All social relations – slavery, serfdom, wage labour – are historical and transient. The truth is, current conditions must change.’ As a concise summary of Marx’s basic approach, this little speech could hardly be improved.

Very occasionally, the attempt to expound Marx’s ideas or set them in their context sounds a little clunky, at least to those already familiar with his work. During the police raid on Rheinische Zeitung, for example, Marx suddenly shouts ‘I’m sick of you too, Bauer, and all you Young Hegelians!’ After vomiting onto the pavement following a day-long drinking session with Engels, Marx stands up to deliver the eleventh thesis on Feuerbach. Much of the dialogue, however, seems to have been adapted from Marx and Engels’ correspondence. As in those letters, the film is multilingual, and is set in locations across Germany, France, Belgium and England. As well as lending authenticity, this helps emphasise the internationalism of Marx and Engels’ outlooks and of the wider communist movement. Near the end of the film, we find the men and their partners on the seafront at Ostend. In what is the only moment in which two women talk to each other without a man present – though they are talking about the men – Jenny and Mary stand to one side in conversation, with the former showing some discomfort at the of the latter’s more radical attitudes to family and sex. Karl and Friedrich, meanwhile, roam the beach as Engels tries to revive the enthusiasm of a tired and morose Marx, the grey sea evoking not only their isolation and mental turbulence as they struggle to finish the Manifesto, but also the breadth of their horizons and of the communist movement.

The final moments of the film break from its formal conventionality: workers look directly into the camera as we hear Marx and Engels read some of the famous passages of the Manifesto. Captions tell us about the 1848 revolutions and Marx’s subsequent exile in England, before the well-known photo of Engels with Marx and his wife and daughters appears on screen. During the credits, we are shown footage of significant historical events, from the 1929 Wall Street Crash to the 2008 crash via May ’68, and various heroes and villains, from Che Guevara to Margaret Thatcher. Although undeniably rousing, the music chosen to accompany this sequence – Bob Dylan’s ‘Like A Rolling Stone’ – is arguably misjudged, summoning baby-boomer nostalgia revolution and inadvertently implying that both Marx and revolution are figures from the past. The montage of images, however, makes the point effectively that history is both difference and repetition – old struggles in new forms, revolution and counter-revolution. As the final caption puts it of Capital: ‘An open, immeasurable work, unfinished because the very object of its critique is in perpetual motion’.