Marx & Philosophy Review of BooksReviews‘Society and Social Pathology: A Framework for Progress’ by R.C. Smith reviewed by Neal Harris 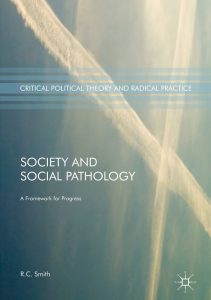 R. C. Smith’s text is an important contribution to the rapidly growing body of work on social pathology diagnosis. While pathology diagnosing social critique is usually associated with the Critical Theory tradition, Smith’s study roves far beyond Critical Theory and left-Hegelianism, and engages with the sociology of health, psychoanalysis, prefigurative politics, psychology, sociology and philosophy (amongst others). If forced to categorise the text, I would suggest Smith writes as a cross-disciplinary sociologist, or perhaps, even more broadly, as a cross-disciplinary social scientist. It is thus worth stressing that, unlike other discussions on this topic, this is not a text written by, or for, ‘pure’ Critical Theorists, or ‘pure’ social theorists. Indeed, compared to other studies on social pathology, one is immediately struck by the wealth of quantitative data which is discussed (and well utilised to support Smith’s arguments). This review will argue that both the strengths and weaknesses of the text are rooted in the author’s more expansive, cross-disciplinary, engagement.

The text is organised into five chapters, the first of which is an extended introduction. Utilising a rich array of statistics, Smith argues skilfully for what he terms ‘the social connection’ (8). This is perhaps the text’s key strengths: Smith is at pains throughout to link individual suffering to social pathologies. In this regard the wealth of quantitative data utilised helps make a highly persuasive case. Smith provides a plethora of empirical studies to support his argument that increasing social suffering, in the form of the incidence of mental health diagnoses (7-9), or cardiovascular diseases (15), is directly related to the social conditions of late-capitalism (23). Smith easily convinces the reader that there is a causal link between some forms of individual suffering and the form of social life. From its clear articulation in the introduction, the existence of the “social connection” is ever present in this study. Smith deserves real credit for this.

The second chapter, An Alternative Conception of Social Pathology, discusses a different approach to social pathology than sociology of health inflected analyses. Fromm, Freud and Honneth are engaged with in this section. One might view this second chapter as housing the themes more regularly discussed by Critical Theorists. While the engagement with Fromm is thought-provoking and cogent, other parts of this chapter are slightly more problematic. This second chapter could perhaps be lightly revised in a later edition of the text. I return to this shortly.

Chapter Three, History, Systems of Domination and Moral Norms might be presented as the more ‘philosophical’ section of the text, serving to thoroughly account for the complexity of, and variations in, the ‘social connection’. As Smith argues,

… if we are to understand social pathology, conceptualizing the complex interconnection between the individual subject and his/her social conditions is the first place to start. In studying the relation between one’s sociohistorical-cultural conditions and the impact those conditions have on the individual subject… we will be able to pave the way for a more comprehensive analysis of society and its pathology and discontents (125).

Social pathologies thus need to be viewed from a broader, truly historical perspective. When one begins to do so it become apparent that various forms of social life, not merely capitalist societies, evince pathologies. To this end the chapter engages well with Adorno, and draws out that ‘domination’, as much as capitalism, is the antecedent social ill.

The penultimate chapter, The Individual in Capitalistic Society, again draws heavily on Adorno. Here the question is broadly how the subject should be comprehended in social pathology diagnosing critique, and Adorno’s work is presented as an important part of that answer. To this end, Smith seeks to rescue Adorno from the numerous post-structuralist thinkers who attempt to appropriate him as one of their own (170-173). Drawing on Sherman, Smith argues that such attempts are ‘plain wrong’ (171), as they neglect the importance of the Marxist theoretical infrastructure to Adorno’s presentation, and, by extension, its importance to Adorno’s understanding of the subject. It will be interesting to see what seasoned Adorno scholars make of this submission. Personally, I have sympathy with Smith’s desire to rescue Adorno from post-structuralist appropriation, however the manner in which he seeks to do so might perhaps raise eyebrows from some more proficient Adorno aficionados. I shall leave it to them to comment further here.

The concluding chapter, Emancipatory Politics and Social Transformation, points beyond the pathologies of the present, towards a means of “healing” (249). Smith shows support for forms of prefigurative politics, and presents the foundations for a “holistic economics of healing” (283). This is an interesting presentation, and most definitely serves to extend existing discussions on social pathology. There is a lot of fascinating material to engage with here, however due to space limitations, that will also have to wait for another occasion.

Smith’s work has some real strengths. The discussion roams far and wide, vastly extending the usual terrain covered by Critical Theory texts on this topic. As a result, the book is rich in areas for future discussion and debate. Smith’s smooth integration of empirical data to support his arguments is meritorious, as are his effort to link his broader arguments to Nafeez Ahmed’s work on the interconnectedness of global crises. Further, Smith’s use of Erich Fromm as a central figure is a pleasant surprise, and the attempt to reinstate Fromm as an important social theorist is a cause many will fully support. In short, there is thus a lot to be positive about; Smith’s work is truly worth engaging with, largely because it moves beyond the usual confines of texts on social pathology diagnosis.

Equally, while Smith proficiently and intriguingly shifts the field of discussion, his engagement with the pre-existing Critical Theory literature is a little more limited. To start with, there are some bizarre omissions in the text. Axel Honneth (2007) and Frederick Neuhouser (2012), inter alia, have repeatedly argued, and with good reason, that Rousseau is a crucial figure for understanding pathology diagnosing social critique. While Smith’s text roams far and wide (the bibliography is a titanic 46 pages), there is no discussion of Rousseau at all. Equally, there are several prominent social theorists, such as Frederick Neuhouser, Nancy Fraser and Rahel Jaeggi, whose work on social pathology is truly prominent in the wider literature, who are entirely absent from this study. A charitable interpretation may suggest this is not necessarily a serious weakness: it is entirely acceptable, if just a little curious, to write a book-length study on social pathology, while excluding some of the most discussed dramatic personae.

That said, there are some serious issues that do arise from Smith’s failure to engage with the key Critical Theoretical debates on social pathology. Take for instance Smith’s discussion of Axel Honneth and social pathologies (section 2.6 and important parts of section 2.7). Axel Honneth’s influential work on social pathology has been increasing fused with his (even more) influential critical theory of recognition. There is thus a growing body of theorists who operate within a ‘pathologies of recognition’ perspective, seeking to diagnose social pathologies in the recognition order. The utility or otherwise, of such a framework, is at the core of many of the debates surrounding social pathology diagnosis, yet Smith fails to engage with these themes in his text. More problematically, where he does engage with contemporary Critical Theoretical literature, absent an account of these debates, there is a real loss of granularity in his analysis. For example, Smith’s discussion on Zurn (103) fails to truly capture the controversial nature of his argument, namely that a particular recognition-cognitivist logic can be found in all social pathologies. For Zurn, it is only “second order disconnects” within recognition relationships which constitute social pathologies. This is an incredibly restrictive framing of what constitutes a social pathology, both in its narrow cognitivism, and because it is operates exclusively from a recognition paradigm. But because Smith fails to adequately draw out the essential, and highly contested, nature of the recognition vs. redistribution debate to the study of social pathology, the controversial nature of Zurn’s influential framing is occluded. This is just an example, and I do not want to state that there is no merit at all to Smith’s engagement with contemporary Critical Theory and social pathology. More specifically, my claim is that a deeper analysis would be beneficial here, as would locating the argumentation he does put forward more effectively within the important social theoretical debates.

Thus, while the text is a truly important and stimulating read in that it offers new grounds for social pathology scholarship, it might equally be critiqued for a lack of depth on the key debates in Critical Theory in the study of social pathology. Ultimately, both the strengths and the weaknesses of Smith’s text are rooted in Smith’s more expansive, cross-disciplinary, project.