Marx & Philosophy Review of BooksReviews‘War Against the People: Israel, The Palestinians and Global Pacification’ by Jeff Halper reviewed by Garrett Halas 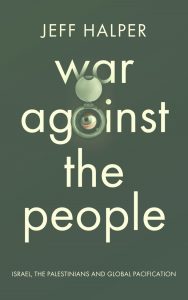 Jeff Halper
War Against the People: Israel, The Palestinians and Global Pacification

Garrett Halas is a Ph.D. Sociology student at Carleton University in Ottawa, Canada. He studies …

What are the global political circumstances that have allowed Israel to achieve five decades of occupation in the face of a global community advocating for the observance of human rights and international law? How is Israeli occupation situated within the context of global capitalism? And what does the trend of international indifference to Palestine reveal about the relationship between security and capital in the 21st century? Jeff Halper addresses these core questions in War Against the People by locating the Israeli occupation within the context of the capitalist world-system and connecting the pacification of Palestine to a larger strategy of global pacification.

Since the birth of neoliberalism, the transnational capitalist class of the North have continued to exercise control and domination over global circuits of capital in the South. As the North exploits and extracts wealth from the global South, the world becomes increasingly polarized and this strain only intensifies with the expansion of neoliberal reforms. While this new globalized economy has led billions into abject poverty across the globe, it has also ushered in a generation of private wealth without historic precedent. As the North impoverishes the South, it also enriches the owners of industry who exploit workers of the North and South, as seen in the emergence of transnational elites contrasted against a ‘planet of slums’ (11).

Halper argues that this new global economic exploitation has introduced a new global class struggle that is addressed through a system of global policing, which he refers to as ‘global pacification’ (9). Halper argues that pacification is exercised through ‘securocratic’ warfare, which he argues, is fundamentally different to traditional interstate warfare because of its resemblance to policing (11). The militaries of the hegemonic bloc are engaged less in practices of national defence or armed conflict, than they are in practices of global policing, carried out as international crime control. The primary difference between warfare and policing is the asymmetry of force between opposing sides. While traditional interstate warfare is fought between relatively symmetrical forces, policing is practiced under conditions of pre-established dominance. Halper argues that the shift from interstate war to securocratic war has coincided with the spread of global capital and the formation of a global hegemonic bloc. As capital spreads across the globe, so do the forces securing it circuits.

Global pacification requires a global ‘pacification industry’ to supply, equip, educate, train and aid in this process. Halper argues that global pacification techniques are greatly facilitated by the global division of labour, developing new and increasingly sophisticated policing technologies and techniques. Thus, the forces of global capitalism are not only felt in the way the poorest of humanity are policed, but also in the actuarial rationale of managing security production and distribution on a global level.

Since its establishment in 1948, Israel has been in constant war against Palestinian resistance. As a nation fighting for its survival and to make up for its small size, Israel has adapted its forces and relations of production to equip its military with the most current technologies. Throughout this period the Israeli economy slowly began to specialize in high-tech security technologies that would bolster its military capabilities. In 1967, the Six-Day War proved that the Israeli military was more than capable of achieving its national security, and that Arab forces, including Palestine, were no longer a formidable military threat. The occupation that commenced thereafter has stood as a reminder of Israeli military strength against a colonized population.

Importantly, Israel’s pacification industry originally emerged as a necessity, but since the 1967 war, the Israel-Palestinian conflict has taken on the characteristics of securocratic warfare. The occupation constitutes an asymmetrical distribution of force as Palestine has no army, navy, or air force and is at the mercy of Israeli precision targeting and other advanced weapons systems. Halper admits that it is not immediately or clearly obvious what Israel has to gain from its occupation of Palestine. Not only is it costly both financially and in terms of human life, but it is being carried in out in the face of nearly unanimous international opposition and international law urging Israel to accept a two-state solution along the 1967 borders.

What does Israel have to gain?

Halper’s central claim is that the occupation is a testing-ground for high-tech security commodities. Israel does not demolish the West Bank or Gaza strip, nor does it return to the 1967 borders, because Israel depends on the occupation to operate as a ‘test-laboratory’ for its military and police techniques and technologies. The geo-political and economic circumstances facing Israel give it a unique advantage in becoming an important player on the global stage. Not only does Israel’s military demonstrate a high degree of flexibility, horizonal integration and cooperation as well as continual technological upgrade, but the industries supplying the materials for these developments have also become highly sophisticated. Halper includes a catalogue-like description of some of Israel’s most advanced weapons systems throughout a large portion of the book.

As global capitalism continues to demand more sophisticated, integrated and globally networked forms of security, different nations around the world turn to Israel as a leading figure in the high-tech sector of the global pacification industry. As core and semi-periphery nations across the world seek to carve their own space in the global capitalist economy they are becoming increasingly interested in Israel as a model for how to pacify their own targeted populations. As a result, Israel has filled an important niche role in the global pacification industry. For the core and semi-periphery nations around the world this has led to relaxed criticism of Israeli occupation because criticism is counter-productive to forging diplomacy with Israel, and the Palestinians are implemented in the production process of the commodities these nations seek to consume from Israel.

As Palestine is implemented in the production process of Israeli security commodities, the perpetuation of the occupation becomes necessary. Ultimately, Halper concludes that Israel’s profoundly popular status generally found among world leaders in international politics, and its on-going conflict with Palestine are two sides of the same coin, which is bolstered in the context of global capitalism and global pacification.

In War Against the People, Halper addresses large questions with great originality and clarity. He also develops answers to questions that may otherwise be difficult to formulate. Why does Israel exercise such exaggerated control over Palestine? Why are its responses to Palestinian resistance so asymmetrical? Why are heads of state across the globe so silent on this issue? Why does Israel continue to play cat-and-mouse with Palestine? Without accounting for the global context, it may be difficult to view Israeli pacification as anything but malevolence. But the global context provides and important groundwork for interpreting these questions in a way that recognizes the instrumental calculus of world leaders on questions of foreign policy.

Furthermore, his text brings an under analyzed perspective into academic and activist discourse on the Israel-Palestine conflict. Expressing dissatisfaction with explanations centered on ethnic difference, the Jewish lobby, Israeli extraction of Palestinian resources, or U.S. ‘friendship’, Halper says he began to develop an understanding of the world-system to develop a clearer idea of Israel’s role within a global context

On the surface, War Against the People may give the initial impression of a theoretically inconsistent text. Halper sometimes makes quick references to theoretical concepts that may not connect with each other as well as his overall argument may suggest. However, whatever Halper sacrificed in theoretical consistency was enhanced in descriptive detail through his unique perspective. His core argument revolves around the relationship of security and capital within the global context, and the role of Israeli occupation within this arrangement. Halper’s two most important contributions to Marxist analysis include his vision of i) the pacification industry and ii) securocratic warfare as a global process between security and capital. These concepts are indispensable tools for further understanding the groundwork of global capitalism and how it is related to contemporary forms of violence evident on a global scale.

The text is academically rigorous as it discusses specific weapons, weapons systems and organizational structures of the Israeli military/police-industrial complex. His in-depth detail of these various instruments and organizations allows the reader to fully appreciate the strong empirical foundations of his theoretical framework. His text is an exemplary application of pacification theory and world systems theory. Any scholar with an interest in political violence, policing, or the Israel-Palestine conflict would surely benefit from this meticulous and thought-provoking work.