Marx & Philosophy Review of BooksReviews‘Working the Phones: Control and Resistance in Call Centres’ by Jamie Woodcock reviewed by Robert Ovetz 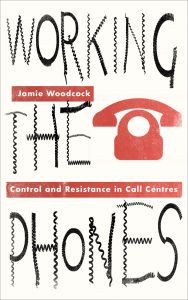 Robert Ovetz, Ph.D. studied with Harry Cleaver for nearly a decade at UT-Austin. He is a precarious …

While reading Working the Phones I suddenly remember that I once worked for a brief time in a call center as an undergraduate student. We were calling out of the local phone book raising money for charities. I quit when we were told to hit people up for money for “Blue Santa” (local police Christmas gift fund). Years later, I found out my employer scammed half the money we raised. The call center workers portrayed in Jamie Woodcock’s book aren’t calling out of the phone book anymore. Computers are central to the disciplining and exploitation of their labor and call centers are more centrally integrated into the global relations of production. Yet, like me, they are quitting and engaged in other forms of refusal of work that never occurred to me at the time. To investigate resistance to work in UK call centers, Woodcock gets a job in one. Once inside, he undertakes a fascinating “workers’ inquiry” to understand the organization of their work, and, most importantly, new tactics, strategies, organizational forms, and objectives to reignite working class struggle.

Working the Phones is an invaluable contribution to the ambitious Wildcat series published by Pluto Press that seeks to investigate new forms of working class struggle, a tragically neglected project that is recently experiencing a long overdue resurgence. Woodcock’s book picks up one stream of the renewed interest by undertaking a workers’ inquiry which was originally proposed by Karl Marx in 1880 but was overlooked until the 1950s. For the next 3 decades Italian, French, UK, and American working class groups, now collectively better known as autonomist marxism, made it the focus of their work, undertaking workers’ inquiries in auto plants and other factories. As Woodcock observes, such a project “forms the basis for an understanding of the new contexts in which the workplace is organized and requires an investigation of the current conditions upon which new forms of organisation can be built.” (30) While he overlooks the workers’ inquiries into unwaged labor in the home, undertaken by Wages for Housework, and in the schools and universities, conducted by Wages for Schoolwork, Woodcock makes a compelling case for taking back up the finely develop analytical tools of our predecessors, a project which I wholeheartedly share.

Woodcock chose to focus on the rapidly growing call center industry where an estimated 1 million workers toil in relative obscurity despite being one of the largest industrial sectors in the UK. After narrowing down his focus to call centers making outgoing sales calls, he eventually obtained a job and gets to work in more ways than one. The final product of his workers’ inquiry “from below,” in contrast to those “from above” done from outside the workplace, is a sharply focused analytical model for inverting the class perspective from capital to labor, as Mario Tronti and Harry Cleaver proposed. While originally the basis for his dissertation, this short book is nothing like the often acrid dry tone of such academic tomes. It is entirely accessible, easy to read, and even generously sweetened with cheeky humor. I frequently found myself laughing, a first while reading about class struggle. It was a true pleasure to read from beginning to end.

What makes it such a vital contribution to the project of workers’ inquiry is that the book is extremely well organized into four main themes: working class composition (ch. 2), capital composition (ch. 3), everyday forms of resistance (ch. 4), and the recomposition of the power of an increasingly precarious working class (ch. 5). The organizational logic of the book reflects the analytical structure of a workers’ inquiry: study the current technological organization of production (capital composition), how workers are currently organized in production (working class composition), and the strategy, tactics and objectives of the newly emerging forms of working class struggle (working class recomposition). This extremely effective organization of the book immediately makes Woodcock’s book an instant classic entry into this body of work. Not surprisingly, Woodcock is continuing this work as an editorial member of the impressive new on-line workers inquiry magazine Notes From Below.

But Woodcock isn’t interested merely in doing a sociological study of what Erik Olin Wright and Joel Rogers naively call “high quality” and “low quality” work. Drawing on the groundbreaking work of Harry Braverman analyzing the division of industrial labor, Woodcock analyzes call center work as a model of Taylorist rationalization in which concept is separated from execution and “managerial control is programmed into technology” (66). Workers read from a highly regimented script with extensive computerized and human dictating of the pace of work and ubiquitous surveillance of the workers.

Call center work would appear to be lacking in any space in which workers could carry out resistance. Managers repeatedly harp on the disproportionately female workers to “smile down the phone,” to sell what Arlie Hochschild calls “emotional labor,” the appearance of warmth and friendliness in order to manipulate potential customers to buy or renew insurance they can’t afford, don’t need, and don’t want. Woodcock contrasts call center work as low autonomy “chain” to high autonomy “brain” or “affective” “mental” labor, a reflection on the new composition of capital as shifting from exploiting “bodies” to the “minds” of workers (54-57). However, this dichotomy overlooks that the emphasis on mental labor is more common in the wealthy industrialized North, while the old Fordist model is still very much dominant and even expanding in the rest of the world.

Even in the midst of a classic example of the existing totalitarianism of the workplace, Woodcock finds a “repertoire of resistance strategies” in a myriad of ways. He identifies micro-level relations among the hourly workers as well as between the bottom rungs of the workers and low level management who are merely hourly workers with larger bonuses and surveillance responsibilities (104).

Ironically, the most common form of resistance is quitting, just as I had done in my brief call center work experience. Quitting was so widely used during Woodcock’s undercover stint that by the time he was fired for low productivity after only a few months, he was one of the longest serving employees in his original cohort. Such high turnover, lingering in mundane “team building” staff “buzz” sessions, beating the clock for breaks, and other everyday forms of resistance illustrated the widespread existence of not merely resistance but refusal of work. Ironically, the low level managers who were paid an hourly wage nearly as low as the call staff would collaborate with the workers to artificially lengthen “buzz” sessions at the end of the month to keep workers who are ineffective sellers off the sales floor in order to artificially maintain their current sell rates and secure their monthly bonuses. Ironically, these low level managers were covering for unproductive workers while even increasing their own pay (70).

The linkage between everyday forms of refusal and working class struggle is at the center of Woodcock’s focus. The myriad forms of everyday resistance led Woodcock to observe that “call centres are not workplaces devoid of any form of struggle, despite their low levels of unionisation and officially sanctioned industrial action” (111). Nevertheless, the difficulty Woodcock observed, which is identical to all other workers’ inquiries, is how to transform defensive everyday forms of resistance into organized collective action. Woodcock seeks to explore F. Berardi’s point that individual and collective forms of refusal of work is the starting point for a wider working class revolt. While such tactics do little to shift the balance of power in the workplace, an organizing effort need start with these minor actions and grievances to turn widespread discontent into overt struggle with management (112). The challenge is how to overcome the existing composition of capital which impedes such organizational strategies in order to recompose working class power. Here, Woodcock observes, unions have failed miserably by abandoning the difficult task of turning these micro struggles over and against work into organized resistance in favor of struggles over wages and benefits and by partnering with capitalist political parties in the electoral arena (113).

One answer to this challenge lies in Mario Tronti’s call for a “strategy of refusal” whose “challenge is to find the moments of resistance that are already taking place, attempt to understand how they can be turned into a refusal, and seek out the organisational forms that could develop this further” (114). The workers’ inquiry is critical to demonstrating how these moments of unorganised resistance express a refusal of work. “The resistance can therefore be used to understand what kinds of strategies and tactics can develop from the experience of work itself” (119).

Woodcock’s call for expanding the autonomist marxist project of the workers’ inquiry from below is not only timely, it is long overdue. We may ignore his conclusion that the recomposition of the working class will necessitate new forms of organization, tactics, strategy, and objectives  at our own peril (163). The global working class has been consistently losing the class struggle for nearly my entire lifetime. Many of our unions have conceded the fight to a holding position on strictly wages and benefits and cozying up to politicians while they “have failed to relate to the anger and resistance at the workplace level” (144). Our tactics and strategies have gone stale and all discussion of objectives are absent, retrograde, or simply repressed. But something is afoot across the call centers, shops, classrooms, kitchens, warehouses, depots, and other sites of waged and unwaged work. Everyday forms of refusal and struggle can be found almost anywhere we bother to look, bubbling up from below like a volcano ready to erupt. And when we bother to look it is no easy task to articulate and translate these into new effective tactics, strategies, objectives, and organizational forms. At least now, we are fortunate to have Working the Phones as a guide for how to do it effectively.