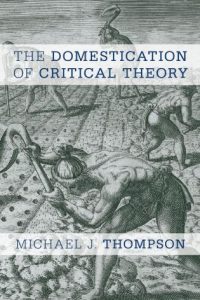 What passes for Critical Theory today is nugatory; it is philosophically weak, and politically compromised. In Thompson’s words, the project has ‘abandoned the search for the real mechanisms and sources of social power’. Echo-chamber ‘academicized political philosophy’ nebulously wafts around conference rooms, languorously ‘sealed off from the realities that affect and deform critical subjectivity’ (3). The Domestication of Critical Theory delivers a bellicose assault on the complicity and inanity of today’s overstayers at The Grand Hotel Abyss. As he establishes in the preface, Thompson’s text is both a thoroughgoing social-theoretical critique and exposition, but further, a clarion call for the reclamation of Critical Theory. Thompson urges Critical Theorists to return to a direct engagement with capitalism in order to critique, and through critiquing, to resist, the deformation of consciousness caused by neoliberal rationality.

One can summarise The Domestication of Critical Theory most crudely in three theses; Thompson offers one essential critique (the neo-Idealist fallacy), and two affirmative theses (the utility of a sophisticated base-superstructure model, and the need for a critical social ontology). The former is by far the most eye-catching. Thompson’s critique of what he terms “neo-Idealism” is a frontal assault on the shibboleths of intersubjectively derived critical social theory. Honneth’s critical theory of recognition is the most explicit target. I shall explore this in more detail shortly.

For those less acquainted with the primary literature, Thompson’s text may be a challenging read. Indeed, to present, and to meaningfully evaluate Thompson’s submissions of what has been “domesticated”, and what has done the “domesticating”, it is necessary to offer the briefest summary of the transformation that has occurred within the Critical Theory tradition over the past forty years.

Critical Theory has undeniably changed substantially since the early days of the “first generation” Frankfurt School theorists. For the project’s esteemed forefathers, Horkheimer, Adorno, Marcuse and Benjamin, Critical Theory was a unique fusion of theory and praxis; it was a rejoinder to the mutilating effects of instrumental rationality on subjectivity and consciousness. Through the very process of critique, consciousness fights back. There was thus an explicit confrontation of the dominant social forces in first generation texts, and a clear disdain for both Western capitalist and Soviet state capitalist forms of life. Identifying a productivist bias, and an impotently totalising critique in the first generation’s canonical texts (think Dialectic of Enlightenment, or Minima Moralia), a “second generation” of Critical Theorists emerged in the 1970’s. The central figure leading this reorientation of Critical Theory was Jurgen Habermas. To his supporters, Habermas is credited with expanding the horizons of an ailing, outmoded, research programme, and esteemed for bringing analytic and continental approaches into productive dialogue. Yet for Thompson, Habermas’s turn away from the Marxist-Weberian paradigm marks the commencement of the ‘domestication’ of Critical Theory, both politically and philosophically. With The Theory of Communicative Action, Critical Theorists began to identify emancipatory intersubjective forces within the capitalist lifeworld, and within the innate capacities of social subjects. The most prominent member of the “third generation” of Critical Theorists is Axel Honneth. Developing Habermas’s bridging of continental and analytic traditions, with an emancipatory intersubjective focus, Honneth is the foremost advocate of a Critical Theory of Recognition. It is the explicit neo-Idealism of Honneth’s recognition paradigm which sits centrally in Thompson’s crosshairs.

So, what does Thompson mean by neo-Idealism?  For Thompson, the neo-Idealist scholar sits outside the Marxist-Weberian paradigm, ‘proceed(-ing) from the premise that there is a self-sufficiency to the powers of intersubjective reason, discourse, structures of justification, and recognition’ (15). Crucially, such theories ‘stem from an account of reason, of social practices and noumenal capacities that are divorced from the distorting potency of social power, rooted in the material organization of social life, to shape norms, values, and cognition’ (15). Thus, neo-Idealist texts are predicated on the foundation that there is an autonomous power, a pure, uncorrupted emancipatory capacity, within various forms of intersubjective and cognitive action. Thus, framed most crudely, there has been Habermas’s theories of language, Honneth’s theories of recognition, and Forst’s theories of justification etc. For Thompson, the belief that such capacities can exist, untarnished by the dominant social rationalities, is unjustified, and entirely oppositional to the original Critical Theoretical project, namely to combat the denaturing impact of pernicious rationalities on human consciousness. While the theories of the second, third and fourth generation of Critical Theorists are more palatable to a broader academic audience, the sacrifice has been to render such theory impotent ‘to critique the actual mechanisms of social domination and power in modern societies’ (15).

In contrast to neo-Idealism, through a turn to Rousseau and to Durkheim, Thompson articulates the significance of what he terms ‘constitutive power’ (27). Thompson defines constitutive power as ‘the capacity of any agent or institution to form, shape, or constitute the values, norms, cognitive capacities, and frames of any subject to the extent that said subject internalizes them into his own personality system and pattern of cognition’ (30). Expressed most simply, ‘constitutive power is a means by which the subjectivity of the subject is equipped with value-patterns that have their sense of validity already fused within them’ (30). Thompson’s critique of neo-Idealism is that ‘processes of communication, of recognition, of the capacities needed for “justification,” [can] all be colonized by the constitutive dimension’ (32). At core, Thompson’s submission here is perhaps just a sophisticated reassertion of the foundational animus of the first generation of Critical Theorists, namely that the capacity for critical thought was becoming pathologically distorted by social imperatives. Thompson bloods this critique against Rainer Forst to great effect:

We are asked as Rainer Forst proposes, to consider a conception of critical cognition where “moral persons have a fundamental right to justification, and a corresponding unconditional duty to justify morally relevant actions”. But this simply sidesteps the entire problematic that critical theory placed at the centre of social theory: the extent to which the reification of consciousness renders subjects acritical to the extent to which the socialization into a value-system that possesses the internal validity ready-made can predispose subjects to forms of cognitive pathologies such that their ability to call for justifications and critique whither (32).

More synoptically, Thompson throws down the gauntlet to neo-Idealists thus:

If my basic thesis is even conditionally accepted, then it seems to me that the claim for founding an “intramundane possibility for emancipation,”, or an immanent critique of  society, is unwarranted and the theory of recognition collapses into a neo-Idealist moral philosophy – one that suffers from the matrix of social relations shaped by material forms of power (64).

Such an argument, in itself, seems highly persuasive.

As expressed, The Domestication of Critical Theory, is not merely a book of social theory and philosophy; Thompson is fighting to chart a new direction for the broader Critical Theoretical project. For Axel Honneth, ‘Critical social theory must shift its attention from the self-generated independence of systems to the damage and distortion of social relations of recognition’ (Honneth, 2007: 72). Thompson is not in agreement, as he reads Honneth to be making an explicit attempt to move Critical Theory ‘away from its Marxian foundations’ (67). Considering that Honneth’s Freedom’s Right goes as far as to identify numerous forms of freedom that are created by the market itself, it seems hard to deny that the explicit Marxian foundations have been suffering subsidence. Thompson presses his case on multiple fronts, declaring in turn, that recognition-theoretical approaches ‘produce a political theory of identity rather than a critical theory of modern domination’ (65), and that ‘recognition … emphasises social action at the expense of the distorting influence of social structure and function’ (65). Beyond the text, support could be lent to Thompson’s claims by asking who cares for Critical Theory nowadays beyond the projects own practitioners? Wolfgang Streeck’s How Will Capitalism End, a substantial text, drawing on multiple Marxian thematics, does not see any utility of turning to contemporary Critical Theory. It does seem as though the third and fourth generation approaches are failing to penetrate departmental boundaries with the potency of earlier paradigms.

If the Critical Theoretical project is to remain politically and intellectually relevant, it would must engage reflexively with Thompson’s text. The neo-Idealism and neo-liberal apologism presaged by Habermas, and manifest tout court in Honneth, must be brushed aside. In its place, Critical Theory must return to an explicit focus on the distortion of subjects’ rationality and consciousness ‘through social processes shaped by the imperatives of social power and interests’ (3). Thompson is perhaps at his most convincing in his dethroning of the neo-Idealist fallacy. What makes Thompson’s text so persuasive is the clarity with which he restates the incompatibility of intersubjectively derived theories of judgement, recognition and emancipatory communicative action, with Marx’s foundational Copernican insight. It remains demonstrably the case that ‘it is not the consciousness of men that determines their existence but their social existence that determines their consciousness’. Seeking innate emancipatory capacities from subjects enmeshed in neo-liberal, racist and patriarchal dynamics is to occlude Marx’s most important lesson.

While this review reflects a distinctly positive engagement with the book, there remain lacunae that warrant further clarification. As Patrice Canivez has already commented; if one accepts Thompson’s critique of neo-Idealism, and the potency of constitutive power, what then is the genesis of Thompson’s own critical position? In short, is Thompson’s approach totalising, and overdetermining? How does one develop a critical voice, in a society dominated by constitutive power? These foundational methodological questions seem unanswered in the text.

Further, where do we go from here? What are Thompson’s suggestions for political transition, and for resistance? In many ways Thompson succeeds in articulating the paradoxes and complicities of contemporary Critical Theory, but in so doing he returns us to the totalising paralysis of earlier generations. The Domestication of Critical Theory is indeed a crucial social-theoretical and philosophical contribution. While I am convinced by Thompson’s critique of the contemporary domesticated state of Critical Theory, what now? What hope for the future? Where is the politics of transition?

I thus await Thompson’s forthcoming The Spectre of Babel: Political Judgement and the Crisis of Modernity (SUNY Press, 2019) and Twilight of the Self: The Eclipse of Autonomy in Modern Society (Stanford, forthcoming) with great interest.