Marx & Philosophy Review of BooksReviews‘Returns of Marxism: Marxist Theory in a Time of Crisis’ by Sara R Farris (ed) reviewed by Bill Bowring 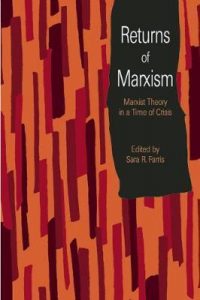 This rich collection was initially published in 2014 by the International Institute for Research and Education (IIRE), which opened in Amsterdam in 1982. One of the founding Fellows of IIRE was Ernest Mandel. The book is edited by Sara R. Farris, who teaches sociology at Goldsmiths College, University of London.

The 20 chapters in the volume (including the Introduction) are all revised texts of papers presented during a two year seminar series at IIRE between 2007 and 2009, and a number of them are revised versions of earlier publications. The readers is therefore offered a series of insights into the state of Marxist theory some 10 years ago. Nonetheless, this reasonably priced collection is highly recommended, and contains, together with some oddly short chapters, some real gems.

In her Introduction Sara R. Farris writes: “The collection of essays presented in this volume aims to demonstrate the richness, rigour and importance of Marx s thought for developing alternative worldviews and politics in the present. We hope the reader will find these texts interesting and useful not only in her efforts to make sense of the world that surrounds us, but also in her fight against the many forms of injustice brought about by capitalism.”

Is this hope fulfilled?

The texts are divided into six different sections, with the aim of proposing, according to the editor, “a path for reading them as contributions to broader significant problematics within the Marxist tradition” (7). The sections have impressively diverse headings: Reading Capital (five chapters); Re-Reading Marx (three chapters); Marxism and International Politics (three chapters); Historicising Historical Materialism (three chapters); Feminism and Queer Marxisms (two chapters); and Many Marxisms (three chapters) – and an Introduction by Sara R. Farris.

The 22 authors of the chapters, only four of whom, disappointingly, are women, are geographically diverse, drawn from nine countries: two scholars from Australia, one from Canada, two from China, two from Denmark, three from England, five from Germany, one from Italy, five from Netherlands, and one from Scotland. The shortest chapter is 13 pages: Jeffrey Webber on the re-groupment of popular forces against Rafael Correa in Ecuador. Peter Drucker on socialist feminist questions about queer activism is 14 pages. The longest chapters, 25 pages each, are Guglielmo Carchedi on “The Crisis and Marx’s theory of knowledge”, and Frieder Otto Wolf on “What ‘capitalism’ is, what it means to be against it, and how to end it.”

For this reviewer a high point of the collection is the chapter by Michael Heinrich, “A Short History of Marx’s Economic Critique” (63-86). This is an excellent translation into English of a revised version of Heinrich’s 2009 “Theoriegeschichte der Marxschen Ökonomiekritik” in the collection Hello Marx: Zwischen “Arbeiterfrage” und sozialer Bewegung heute (Peter Bedcherer and Karen Schierhorn (eds), Hamburg: VSA Verlag). The title is rather deceptively modest for what is a lucid and bracing introduction to Heinrich’s central message: that Marx was categorically opposed to the assumption that he had established a “socialist system”. As Heinrich insists, “Above all, there are no texts to be found that show directly or indirectly that he wanted to build any kind -ism.” (66). Later in the article Heinrich explains that rather than a single consistent oeuvre, or, as for Althusser, a simple break between a younger, more philosophical Marx and a later focus on political economy, “we find in Marx a whole series of attempts, discontinuations, shifts, new concepts and new beginnings.” (72).

Heinrich concludes by declaring that “Marx did not expect people to take action against capitalism on moral grounds, but because of the fact that their immediate vital interests are constantly put into question. When people repeatedly resist those relationships, however, they will learn to fight, not only for an immediate improvement in their situation under capitalism, but also, from time to time, to challenge the very existence of capitalism as such. Marx’s Capital is quite helpful in those struggles. It may well turn out, as a self-confident Marx once claimed, to be “the most terrible missile that has yet been hurled at the heads of the bourgeoisie (landowners included).” (80-81, quoting Marx to Becker 17 April 1867, MECW vol. 42, p. 358).

At the conference “Capital.150: Marx’s Capital Today” held in London on 20 September 2017, Heinrich’s topic was “Communism in Marx’s Capital”, and is available at  https://youtu.be/cZSccinSMp8. This is well worth watching especially as he was speaking on a panel with three great young female Marx scholars, Tithi Bhattacharya on “Social reproduction theory: conceiving capital as social relation”; Lucia Pradella on “Marx’s Capital and the power of labour: imperialism, migration, and workers’ struggles”; and Beverly Silver on “Marx’s general law of capital accumulation and the making and remaking of the global reserve army of labour” – all on the same YouTube video. When he was asked by a participant whether he could sum up Marx’s lifetime of research and writing in one word, Heinrich replied “Struggle!” This reviewer agrees. It is now abundantly clear, as Heinrich insists, that there is no predetermined end of capitalism, but struggle is an open-ended process – “much is possible but nothing is for sure” (81).

Another chapter which caught this reviewer’s close attention is “Towards a Critical Political Economy of European Governance”, by Jan Drahokoupil, Bastiaan van Apeldoorn, and Laura Horn, from Germany, Netherlands and Denmark (193-213). This is a revised version of their Introduction to their edited volume on neoliberal governance in the European Union, Contradictions and Limits of Neoliberal European Governance: From Lisbon to Lisbon (Palgrave Macmillan, 2008). The revision has left in place a number of rather tantalising references to chapters in their collection, referred to, confusingly, as “this volume” ( 207, 208, 209).

Of particular interest to this reviewer is the fact that the authors mobilise a “critical realist perspective” for their critical political economy, drawing on Roy Bhaskar’s explosive 1979 The Possibility of Naturalism and Margaret Archer’s 1995 Realist Social Theory, as well as Hubert Buch-Hansen’s 2006 paper “Beyond rationalism and constructivism: a critical realist intervention in EU studies”, delivered at the ESA Critical Political Economy Workshop in Amsterdam, the “Amsterdam Project”. They stress “the dialectical interplay of structure and agency over time in which agency is never pre-social but always operating within the bounds of given social structures while the latter are at the same time dependent upon (individual, collective, strategic or less strategic) human agency for their reproduction or transformation.” (199) Furthermore, the authors start from the idea that (social) reality is stratified, “and that therefore we need research strategies that are able to probe at the deeper levels of non-observable but real structures that account for what we observe empirically.” This methodology, which Marx described as “science”, was, as the authors point out, developed in Andrew Sayer’s 1992 Method in Social Science: A Realist Approach. The 1971 edition of Antonio Gramsci’s Prison Notebooks also provides a rich source of development in the authors’ illuminating if brief analysis of the nature of the EU and its institutions.

Another thought-provoking chapter is Bertel Nygaard’s “Reconsidering Bourgeois Revolution” (247-70), drawing on his 2007 PhD Dissertation, which was in Danish. The focus is on the French Revolution of 1789-1799. Nygaard first points out “significant tensions in traditional uses of the category ‘bourgeois revolution’ through an outline of main points in its conceptual development, then suggesting a revised model for reconstructing the important issues involved in ‘bourgeois revolution’ while attempting to avoid the difficulties of earlier uses.” (248) Of particular interest is Nygaard’s focus on Marx’s notebooks of 1843-4, in which Marx conceived the French Revolution “not primarily in socio-economic class terms but as the foremost example of political emancipation, that is, the separation of the social sphere from the political sphere.” That is, the emergence of ‘the state as such’, the pure state, recognising each social individual as a citoyen, a public social being. The other side to this process was the emergence of the privatised social or economic sphere of human lives, the sphere of bourgeois existence. (253) Nygaard notes Marx’s insistence, basic to him and to Engels, that analysis should begin from the concrete and historically specific character of the object, not transhistorical schematism. (254)

Elsewhere, Carchedi’s chapter, mentioned above, proposes a reading of the theory of value as the necessary framework to articulate a theory of subjectivity and knowledge production, a Marxist theory of knowledge as the condition of possibility for a theory of crises. Bellofiore’s chapter, on the other hand, exotically entitled “Chrysalis and Butterfly, Ghost and Vampire: Marx’s Capital as the ‘Gothic critical economy of zombie capitalism,” (41-62, with no references), attempts to assess the nature of contemporary capitalism in terms of ‘centralisation’ without ‘concentration’, whereby financial capital is increasingly central to valorisation and workers’ organisation and struggles are made more difficult by the schizophrenic emergence of the labourer as a ‘traumatised’ worker, a ‘manic-depressive’ saver and an ‘indebted’ consumer.

Finally, this is indeed a rich collection, to be acquired and savoured.