Marx & Philosophy Review of BooksReviews‘World Revolution, 1917-1936: The Rise and Fall of the Communist International’ reviewed by Chris Gilligan 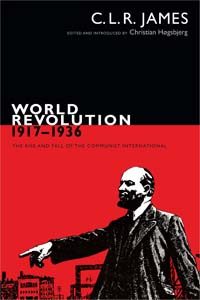 C.L.R. James
World Revolution, 1917-1936: The Rise and Fall of the Communist International

World Revolution, 1917-1936, originally published in 1937, was a landmark publication for the international Trotskyist movement. This edition, with extensive supplementary material, was published in 2017, to mark the centenary of the October Revolution in Russia. The timing is fitting. The book was originally written as a fierce critique of the Stalinisation of the Third (or, Communist) International, which had been established by the Bolsheviks in 1919, as a forum that brought together revolutionary movements from all over the world. After Stalin came to power, in the Soviet Socialist Republics (USSR), the Third International became increasingly subordinated to the foreign policy concerns USSR. Christian Høgsbjerg’s substantial introduction, (57 pages, including notes and images), does a great job of placing the book in its historical context. Høgsbjerg has also gathered together more than a dozen reviews of the book, written shortly after its publication. This edition also includes some additional work of C. L. R. James from the period 1937-1939, with explanatory notes and references provided by Høgsbjerg.

C. L. R. James was a remarkable, and unconventional figure, of twentieth century Marxism. In 1901, he was born in the British colony of Trinidad. He did not seriously study the work of Marx, Engels, Lenin and Trotsky until after he moved to England, at the age of 31. But, over the course of a few years, he became an internationally recognised figure in the Trotskyist movement. James had an intense, and critical, engagement with the international Trotskyist movement, over a period of almost two decades. He was a leading member of the Marxist Group in the Independent Labour Party (World Revolution is dedicated to the Marxist Group). After he moved to the USA in 1938, James became a leading member of the Socialist Workers Party (SWP), (virtually all of the Trotskyist groups that have ever existed in the USA can trace their origins to the SWP). In 1939, James met with Trotsky, then in exile in Mexico (extracts from these discussions are reproduced in the Appendices to this edition). From the time of the Hitler-Stalin Pact in 1939, however, James became increasingly critical of Trotskyism. He eventually broke from Trotskyism in 1951 and, apart from a year-long stint as editor of The Nation, (the paper of the Trinidadian pro-independence People’s National Movement), he remained independent of any organised Left party for the rest of his life. He was a prolific writer and has published books on topics as diverse as cricket, anti-colonial struggles, Athenian democracy, Marxism and Hegelian dialectics, slave revolts in the Caribbean and American literature. His continuing intellectual influence can be seen in the secondary literature on James, which has only grown since his death in 1989.

As Høgsbjerg notes in the introduction, James was motivated to write World Revolution because, after joining ‘the organized Trotskyist movement in Britain in 1934, [he] had almost immediately become aware of the shortage of literature it had at its disposal’. (12) James drew on some of Trotsky’s work that was available in English (such as his three-volume History of the Russian Revolution) and other works by that James read in French because no English translation was available. James also benefited from discussions with people ‘who had visited Moscow or been at the heart of the Communist International at one point or another – such as Harry Wicks and George Padmore’. (13)

World Revolution was written in the febrile political environment of the mid-1930s. In 1933, Hitler came to power in Germany, in part as James puts it, due to ‘the colossal blundering and treachery’ of the Stalinist policy of equating Fascism with Social Democracy (‘Social Fascism’). (322) In 1935, imperialist aggression heated up as the Italians, under Mussolini, invaded Abyssinia (modern day Ethiopia). The Soviet Union continued to supply oil to the Italians. In 1936 the Spanish Civil War broke out, when nationalist forces sought to overthrow the democratically elected Republican government. Alongside the rumblings of what became the Second World War, the world revolution was being undermined by the creeping influence of Stalinism amongst the international workers movement. Reading history backwards, it is easy to think that the dominance of Stalinism was inevitable. Høgsbjerg points out, however, that the second Moscow show-trial in January 1937 was unsettling for many members of the pro-Soviet Union Communist Party of Great Britain (CPGB). When the Committee for the Defence of Leon Trotsky organised a meeting in London in February, the attendance so exceeded expectations that some people had to be turned away. Amongst those who attended were many members of the CPGB. As James remarked later in life, the trial of a leading figure in the February and October revolutions, who was also the leader of the Red Army who helped achieve victory in the civil war, ‘was a crisis for them’. (20) In this context, World Revolution made a significant impact, a fact that can be seen in the reviews of the book, by important left figures like Fenner Brockway, Harry Wicks and E. H. Carr, collected by Høgsbjerg.

World Revolution is, in many respects, an orthodox Trotskyist work. Trotsky and Lenin are the heroes of the book, and Stalin the villain. ‘In so far as individuals personify movements’, James wrote, ‘Trotsky personifies the principles of Marxism, Stalin the degradation of the Third International’. (87) The first five chapters of World Revolution are devoted to laying the foundations for the arguments to come. James outlines key principles of Marxism and Leninism. He discusses the betrayal of the principle of internationalism by the leading figures in the Second International in 1914. He points to the 1917 Russian revolutions as beacons of world revolution. He outlines the defeat of the German Revolution of 1918 as a major setback for both the fledgling USSR and world revolution. He also points to ways in which this defeat was a major impetus to the setting up of the Third International. Over the course of the following nine chapters he catalogues the betrayals of world revolution by Stalin. James blames Stalin for killing the German Revolution of 1923, ruining the Chinese Revolution of 1925-27 and helping Hitler come to power in 1933. He points to the doctrine of socialism in one country as a betrayal of the principles of Marxism and internationalism. He counterpoises the Left Opposition’s ‘whole approach to the fundamental problems of the Soviet Union in the spirit of fearless facing of the truth before the party and the masses’, to Stalin’s method of using ‘the party and State apparatus to cover up failures and under a false appearance of success suppress criticism’. (276). In the final chapter, James provides a clarion call for the Fourth International as the only hope for keeping alive world revolution.

World Revolution is also, however, an unorthodox Trotskyist work. It contains a seed – the characterisation of the USSR as state-capitalist – that was later to be developed as a central element of a critique of Trotsky and Trotskyism. Trotsky characterised the USSR as a ‘degenerated workers’ state run by a ruling parasitic caste of Stalinist bureaucrats’. (28) Høgsbjerg notes that the term ‘state-capitalist’ was circulating amongst some sections of the Marxist Left in the mid-1930s. George Padmore, for example, (a fellow Trinidadian Marxist who headed up the Third International’s ‘Negro Bureau’ from 1929 to 1933), argued in 1936 that the state-built, state-owned and state-managed railways in colonial West Africa were not socialist, but ‘state capitalist’. (29) The most significant influence on James’s thinking on the USSR, Høgsbjerg suggests, was Boris Souvarine, a founding member of the French Communist Party and an early and active member of the Third International. Souvarine opposed Stalin from at least 1924. He characterised the USSR as state-capitalist in his highly critical 1935 biography Staline (James’s English translation of Staline was published in 1939).

This critique of the USSR, and of Trotsky, was more fully worked out and elaborated by James and his co-collaborators in the Johnson-Forest Tendency (JFT), over the course of the 1940s. Shortly after joining the SWP, James (whose Party pseudonym was J.R. Johnson) teamed up with Raya Dunayevskaya (Party pseudonym Freddie Forest) to form the JFT. The JFT gave theoretical and empirical substance to the phrase ‘state-capitalism’. In World Revolution James had noted that ‘[f]or Marx and Engels, collective ownership did not mean Socialism’. (80) He also noted that Lenin had warned that the New Economic Policy (NEP) of 1921 was a necessary retreat, forced on the USSR by the combined deprivations of the First World War and the Civil War. The NEP allowed peasants to sell produce on the open market in the USSR. James cited Lenin’s warning that ‘every speculative deal [on the market] means the restitution of commodity production and therefore the restitution of Capitalism… so long as there still exist two classes, those of peasants and workers, socialism cannot be realised, and an irreconcilable struggle goes on incessantly’. (163) The JFT built on and developed the insights of Marx, Engels and Lenin. The culmination of that intellectual labour appeared in 1950 as State Capitalism and World Revolution (co-written by James, Dunayevskaya and Grace Lee-Boggs). The following year, the JFT followed the organisational logic of their arguments, and finally broke from the Trotskyist movement.

The timing of the re-publication of World Revolution, to mark the centenary of the 1917 Russian Revolutions, might make the reader think that the work is only of historical interest. It is not. It is worth reading today because of the contemporary resonances. History does not repeat itself; every period has its own specificity. Nevertheless, there are recurring themes and there are different conjunctures that can be fruitfully compared. The 1930s that followed the Great Depression and witnessed the rise of fascism has some obvious parallels today. James warned that the Stalinist characterisation of social democracy as ‘Social Fascism’ rendered some sections of the Left ‘physically incapable of seeing the wholesale destruction of Social Democracy going on before their very eyes’. (346) Something analogous appeared to be happening with those soft on Trump Leftists, who argued that a Hillary Clinton Presidency would be worse than a Trump Presidency because of her imperialist approach to foreign policy.

If you are interested in the development of Marxist philosophy, in response to the horrors of the Stalinist counter-revolution, I recommend that you read World Revolution. Then follow this with State-Capitalism and World Revolution (1950), co-authored by James, Dunayevskaya and Lee-Boggs, to see how many of the ideas in World Revolution were developed, some of them transformed and others critiqued, in the intense intellectual hothouse provided by the JFT. Then compare Facing Reality (1958), co-authored by James, Lee-Boggs and Cornelius Castoriadis, and Marxism and Freedom (1958), written by Dunayevskaya. The latter two books demonstrate the very different trajectories of those ideas after the split between James and Dunayevskaya.