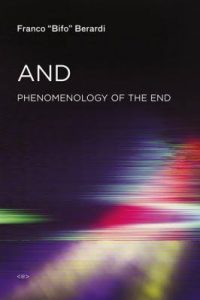 Franco “Bifo” Berardi
And: Phenomenology of the End: Sensibility and Connective Mutation

The Italian media theorist and activist Franco ‘Bifo’ Berardi will be familiar through his active participation in the events of May 1968, and his association with the Italian Operaista movement, which is also known as the Autonomist Movement. He founded the magazine A/traverso in 1975 and worked on the staff of the first independent radio station in Italy, Radio Alice, from 1976 to 1978.

In AND: Phenomenology of the End: Sensibility and Connective Mutation, Berardi argues that a shift in the collective global consciousness is occurring. Our current mode of production, which Berardi calls semiocapitalism, produces an acceleration and compression of time, as well as a de-territorialization of space. In this milieu, our bodily rhythms, aesthetic sensibility, social behaviour, and psychological expectations are mutating, and we suffer from the effects.

Berardi’s first intervention is to develop a method for the analysis of semiocapitalism, which he calls a ‘phenomenology of sensibility’ (11). Building on the Rhizomatic analyses of Deleuze and Guattari, Berardi claims that the task of the philosopher is to, ‘map the territory of the mutation, and forge conceptual tools for orientation in its ever-changing, deterritorializing, territory’ (11). In place of a dialectical analysis, he emphasizes the emergence of overlapping ‘psycho-cultural regimes’ that subject those who live under them to affective detachment and aesthetic desensitization.

Most of the text revolves around his description of a digital social world that he calls the ‘infosphere’ which is characterized by hypercomplexity and algorithmic decision processes operating at a pace that exceeds human cognitive and affective capacities.

A central feature of Berardi’s analysis is the apparent loss of the human ability to use language to exercise human agency in the pursuit of freedom and self-determination. On this point, he makes a distinction between the use of language as a process of ‘conjunction,’ on the one hand, and an emergent form of linguistic sociability that he calls ‘connection,’ on the other. Conjunction is an intentional, creative act, wherein human subjects use language to assemble meaningful identities, choosing among alternative ways of existing in a groundless world where opportunity and possibility are determined through thought, word, and deed. ‘Conjunction is a random concatenation, whose only rule is desire’ (226). Conjunction is the process by which reality is socially constructed by autonomous individuals who continually create their autonomy. Conversely, ‘connection’ is a reactive, passive, mode of interaction in which humans are mere conduits of information, transmitting words and images whose meaning is overdetermined by automated systems. Conjunction requires struggle, negation, compromise, and cooperation, so it can facilitate solidarity. However, connection simply involves drifting from one cause to another, without struggle, and without forming a vision of society worth struggling for.

Although it seems counterintuitive, in a world of corporate and media driven consciousness raising and incessant campaigns of awareness, our heightened state of connectivity has also decreased our capacity for genuine empathy, because the infosphere provides meaning without human agency, intention, or compromise. With no reason to go outside of ourselves, we react to predetermined social causes while remaining nested in personalized digital cocoons until provoked into a reaction by the next parade of images.

From Berardi’s perspective, history, in the Hegelian-Marxist sense of the development of human self-consciousness, autonomy, and self-determination, has halted. Moreover, evolution, as a reciprocal relationship between humans and the environment we have created, is also at an end. At this moment in history, we are,

witnessing a paradoxical reversal. . .technology is replacing the determinist God that God had decided not to be, because it is transforming language into a chain of automatisms, and therefore cancelling the indetermination that was the condition of [the] possibility for freedom (274).

The cyber-capitalist base of the global economy creates an infosphere driven by reified technologies and recursive information systems. The constant barrage of advertisements, entertainments and distractions is so finely-tuned and programmed for capturing our feedback that it already knows what we want; e.g., If you like X, you might like, Y. We are all recognized. We express ourselves in endless surveys, and our opinions about everything from tacos to global warming are noted as making a difference. The dream of self-fulfilment and the promise of happiness demands constant participation, but the concentration of cyber-capital does not trickle down. The infosphere promotes an ethic of constant connection and productivity, an electronic Protestant Ethic, with similar anxieties. The disappearance of private, personal, time, and the dominance of the commodity-image is a form of alienation so inclusive and seductive that we cannot say no. Under the hegemony of the algorithm, humans experience loss of agency and meaning. So fully determined by, and integrated into the infosphere, humans become a ‘swarm.’  This absorption into hyperreality produces a latent sense of boredom and unfulfilled expectation that erupts in the swarming euphoria of social panics that fizzle out before they can be understood and converted into forms of solidarity and collective mobilization.

The speed at which global financial transactions take place also undercuts the possibility of rational discussion, reflective criticism, and the formation of a collective political will. The result is a constant awareness of risk, threat, and ambiguity that sends us running for sanctuary or swarming into the streets in a panic.

Cyber-capitalism devours the present because it continually creates and recreates visions of spectacular, risky, futures but provides no space for agency. So we wait for the next event to erupt as an image on our electronic screens, react to it with full awareness that we are going to be watching ourselves reacting, and then create our own pixelated version of the event, which is absorbed into the infosphere. The images go viral and serve to invigorate the system. Not really knowing why we are caught up in a swarm, and not having struggled to attain the consciousness that could sustain an effective transformation of personal or collective behaviour, we dissolve back into our cocoons until the next opportunity to swarm hails us.

It is not only the pace and rate of economic transactions and the spread of information that has outrun our human capacities for communicative action. Information reaches a saturation point, generating a smokescreen of unnecessary complexity that produces psychological overload, cynicism, and resignation. More communication results in less meaning and becomes a nuisance rather than a useful tool.

The ideological force of the infosphere lies in its ability to control human behaviour while offering a semblance of freedom, agency, and autonomy. The tools that we own, program, and control, such as smartphones, smart cars, and smarthouses, are the immediate interface in which we recognize our autonomy and freedom, but the engine of the infosphere is powered by the cyber-elite, a club whose members consist of a tiny minority of the global population, but whose decisions affect the rest of the world’s workers, the ‘precariat,’ defined by precarious employment in the global system. Wedged in between us and them, there are a series of automated systems operating according to algorithms that convert random individual actions into determined, coordinated, sequences and structures. Empowered in our immediate environments, busily using our digital prostheses, we look through the infosphere at the cyber-elite when they appear as personae, celebrity images carefully concealing their real existence and actions. With every swipe of our screens, we consolidate the power of a tiny minority whose wealth, actions, and identities grow more opaque as we search for them and pass along information about them.

In brief, the system has not only colonized the lifeworld, the lifeworld has become a system. Our ability to distinguish the two and sense the danger has been lost. Enlightenment, the courage to use our intellect to emerge from immaturity, has turned into cunning and artifice. Our ability to move beyond mere survival into the realm of creative self-expression has degenerated into a clever facility with information and a new preoccupation with survival.

This is a work of theoretical ingenuity and methodological innovation containing a variety of observations, empirical examples, and critical insights. However, a few criticisms are in order. The dizzying array of concepts and examples may leave the reader wondering what the central thesis is; or if there is one. Berardi’s Rhizomatic approach confines him to a series of descriptions of an endless horizon of experiences whose connections to other experiences in the infosphere mutate and proliferate, but he has no standpoint from which to launch his critique. He often seems to be describing a form of life from which we have fallen away, or a plan that has gone awry, or a recognizable process of historical change, but there are either too many examples or he does not have a clear standpoint. It is hard to decide which form of life is worse, the mind-numbing boredom and loss of affective sensibility that Berardi associates with endless drifting through a landscape of trivial distractions on the internet, or the ‘idiocy of rural life’ in preindustrial societies, characterized by repetitive celebration of customs and traditions punctuated by frequent periods of inebriated escapism or religious enthusiasm in the midst of fear, isolation, and physical hardship.

Berardi places emphasis on the preconscious, affective dimension of human behaviour. Although our immediate experience does indeed have a non-cognitive, affective, dimension, it is always-already shaped by our conscious expectations. Could it be that our heightened connectivity relativises our understanding of such a great quantity of problems that we become desensitised to the qualitative difference between them? We then encounter the world primed to perceive and to feel, risk, fear, threat, and pain, a sensibility which positions us as clients and victims rather than autonomous social and political agents. The suggestion here is that just as Marx described commodity fetishism as a problem of value equivalence, one could analyse semiocapitalism dialectically, in terms of the production of an ideological superstructure of information equivalence, pseudo-complexity, and overload that collapses the hierarchy of suffering and distributes it so effectively that we cannot trace its origins to economic processes that we might change.

Berardi does state that we must find ways of ‘reviving the intensity of bodily sensitivity’ (291) and ‘disentangling the potency of the general intellect from the techno-economic apparatus’ (291). Unplug: this seems to be his message. This may appeal to a few upper-middle class professionals who have the means to experiment with voluntary simplicity.  But those who languish in underdeveloped nations will not be able to follow a neo-rustic lifestyle, and they don’t want to, because they live a rustic lifestyle which they want to leave behind.