Marx & Philosophy Review of BooksReviews‘Abolishing Freedom: A Plea for a Contemporary Use of Fatalism’ reviewed by Michael Principe 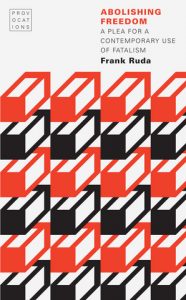 Frank Ruda
Abolishing Freedom: A Plea for a Contemporary Use of Fatalism

Frank Ruda’s Abolishing Freedom is both philosophically and stylistically daring. The book, says Ruda, ‘aims at abolishing freedom in all prevailing senses of the term’ (1). At present, “freedom” has become a term of disorientation. It seems nearly impossible to stand against it, while freedom at the same time increasingly serves to justify systems of oppression. ‘Freedom of speech’ is a rallying cry of the far right. Healthcare, education, and public welfare generally are attacked in the name of freedom of choice. Belligerent and cruel foreign policies as well as the job insecurities of the gig economy are presented as furthering freedom. The list goes on. In an effort to break this impasse, Ruda embraces fatalism. The intent is liberatory; that is, he seeks, through his analysis, to lay out the preconditions for a fundamentally different orientation to freedom, and, invoking Marx, ‘prepare for the real movement that abolishes the present state of things’ (172). Ruda, furthermore, enacts this preparation within a Badouian conceptual landscape: ‘fatalism is an assumption that makes it possible to prepare for what one cannot prepare for—that is, for what Badiou calls an “event”’ (9).

The use of fatalism is not unprecedented in the Marxist tradition. Gramsci remarks in the Prison Notebooks ‘how fatalism is nothing other than the clothing worn by real and active will when in a weak position’ (Gramsci 1971, 336). For Gramsci, revolutionary consciousness is energized in times of defeat by the idea that victory is assured in the end by the necessary course of history. Gramsci, like Ruda, rejects mechanistic determinism, but sees a subjective use for fatalism. While Ruda’s analysis, like Gramsci’s, is justified by the circumstances of the moment, he goes much further, suggesting that something like his notion of fatalism is metaphysically necessary for finding our way to fundamental change.

Toward this end, Ruda seeks to uproot the popular and philosophical tendency to view freedom as a personal capacity (free will) that one always or already has; ‘Reduced to being a capacity, freedom already has its reality (maybe even its full reality) in its possibility’. This, Ruda sees, as a conflation that ‘leads to the idea that freedom is already real without actually being realized’ (3). This naturalization or substantialization of freedom is conceived by Ruda as fundamentally Aristotelian and his task is its removal from the philosophical and social field of play, as its consequence is a kind of totalizing indifference and an ongoing choice to forgo commitment. Because one has freedom of choice, one never has to exercise it.

The text has an aesthetic unruliness to it and is best read as, in part, performative. It begins with a set of “provocations” which serve Ruda as a kind of preliminary ethics:

‘Start by expecting the worst!

Act as if you did not exist!

Act as if you were not free!

Act in such a way that you accept the struggle you cannot flee from!

Act in such a way that you never forget to imagine the end of all things!

Act as if the apocalypse had already happened!

Act as if everything were always already lost!

Act as if you were dead!

Act as if you were an inexistent woman!’ (xi)

These are the slogans of Ruda’s ‘comic fatalism’. For Ruda, comedy lies in the ‘gesture of continuing even after everything seems to have been relinquished…’ (168). One slips on the banana peel and then carries on as if nothing had happened. The above list in effect commands this continuation. In addition, Ruda seeks to derive these principles by constructing a ‘kind of Hegelian counter-history of rationalism’ (10). Embracing the excess of his list, he asserts,

[t]he argumentative style…cannot but be consciously redundant or, in other words, somewhat tautological…This is not the case because I aim to bore my readers but because the counter history of rationalism I present cannot but repeat the very same argumentative move time and again in new and different forms (12).

In this vein, he examines a sequence of thinkers: Luther (a kind of prelude to Hegel), Descartes, Kant, Hegel (who is more or less the star of the show here), and Freud.

He moves from an emphasis on divine providence in Luther and Descartes to the secular fatalisms of Kant and Hegel. While Ruda’s readings are stimulating, they are also highly selective and speculative, including reflections on Descartes’ contortions regarding the relation of mind to body in the Passions of the Soul and a reading of Kant mainly informed by Kant’s younger, rather obscure contemporary Carl Schmid.

Essential to all of these readings is the idea that fatalism is conceptually necessary to arrive at the notion that freedom is something that can happen to us or be forced upon us and thereby constitute a new subjectivity. It can’t preexist this moment. Freedom is not possessed by anyone. It is not something one uses. So, Luther in his dispute with Erasmus follows St. Paul:

Belief emerges from a conversion experience…There is no inner realm (of freedom) from which faith can emerge. Rather ‘my “inner” approaches me radically from “the outer”’ I experience faith only when I encounter God, and I am thus forced to renew myself (16).

Ruda reads Hegel in part through Luther, citing Hegel’s remark, ‘What began with Luther as faith in [the form of] feeling and the witness of spirit, is precisely what spirit, since becoming more mature, has striven to apprehend in the concept in order to free itself, and so to find itself, in the present’ (110). Given the kind of totalizing movement that is Hegel’s system (a completeness that must contain incompleteness), freedom, within this system, again cannot be a capacity,

since all capacities must be realized and are always already exhausted and dissolved when the true freedom of spirit emerges. Philosophy thus cannot be a philosophy of capacities (and therefore cannot be Aristotelian), as it emerges only when everything we are capable of has already vanished (111).

The stages of Hegel’s Phenomenology represent attempts to cling to some stability for knowledge and subjectivity. However, for Ruda, ‘the very idea of stability is unsustainable. Reason cannot escape the conclusion that there is nothing to cling to, and this knowledge is continually brought about by the very attempts to escape it.’ This instability is absolute knowing. Knowledge is based on something that cannot be ‘integrated’ into itself. Instead of being an apologist for the status quo, Hegel’s ‘absolute fatalism,’ for Ruda ‘is the very precondition of preparing for that for which we cannot prepare’ (127). Ruda, much like Badiou, uses revolution and falling in love as examples of events for which preparation is impossible. This space that cannot be integrated allows for new subjectivities to emerge via the occurrences of love or revolution, which cannot be chosen. Freedom cannot be a capacity. It cannot exist, for then it could be integrated. What Ruda calls ‘fatalism’ is needed for the emergence of something fundamentally new.

As for Freud, Ruda takes him as a repetition of Hegel. That which is right in front of us, even the smallest of things, like slips of the tongue, are understandable and do not fall outside the realm of the rational. Everything matters. We must count in the realm of the existent even that which seems not to exist. Ruda quotes Lacan: ‘We must be attentive to the unsaid that dwells in the holes in discourse, but the unsaid is not to be understood like knocking coming from the other side of the wall’ (135). Freud is explicit: there is no psychic freedom. Ruda points to a number of places where psychoanalysis leaves room for a different emergent freedom. For example, in so called “free association”, the determinism at the core of the psyche is brought forward:

What comes to light here is that a different concept of freedom is at stake in psychoanalysis—a freedom that is not in contradiction with determinism and is not a given capacity of my consciousness but something that emerges precisely when I am compelled and coerced (151).

Finally, in order to arrive at the oddest of Ruda’s preliminary ethical commands, he improvises a bit on Freud’s infamous claim that ‘Anatomy is destiny’. While the male child is born directly into the Oedipus complex, the female child has more than one possible developmental destiny. Ruda notes that given Freud’s view that humans are essentially bisexual, the male and female developmental schemes do not necessarily apply only on the basis of biological gender. “Woman”, then is essentially the name for a choice of developmental destiny, a name, according to Ruda, for courage:

Hence, says Ruda, ‘Act as if you were an inexistent woman!’

What of the liberatory project after all of this? Much of the text is devoted to bringing the above-named sequence of thinkers to Ruda’s side. This is part of its performative dimension. Ultimately, whether these interpretations are successful or not has little or no bearing on whether Ruda’s rejection of freedom of choice and freedom as capacity is correct. One thinker that might have been helpful to hear about here is Karl Marx. Early on, Ruda, aligning himself with Marx, at least for the moment, as a critic of freedom, cites the well-known passage from Capital describing the marketplace as ‘in fact a very Eden of the innate rights of man. There alone rule Freedom, Equality, Property, and Bentham’ (2). Ruda’s occasional references to Marx raise many questions regarding his overall project. Is Marx on Ruda’s side or not? Can we make sense of the exploitation of labor without a robust notion of coercion? Does the notion of alienated labour presuppose a notion of freedom as capacity? These questions regarding Marx and freedom are easily multiplied.

Finally, and most importantly, how does Ruda’s project relate to actual political practice? Does thinking about such practice (what we might choose to do to bring about a better world) presuppose something like the Aristotelian capacity rejected by Ruda? Upon finishing Abolishing Freedom, one cannot help asking what, if Ruda is right, is to be done?’