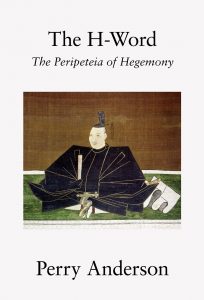 Perry Anderson
The H-Word: The Peripeteia of Hegemony

This slim volume by Perry Anderson is a companion to The Antinomies of Antonio Gramsci (also published in 2017). Gramsci, the Italian thinker and political activist who died in a fascist prison in 1937, is best known for his theorizing on hegemony, which was the term he used for the systematizing cultural tools social classes employ to achieve and maintain political and social domination. Gramsci’s posthumous influence on Marxist and socialist thought was enormous, and gave birth to a veritable cottage industry of Gramsciana. With his essay The Antinomies of Antonio Gramsci (which originally appeared in 1976), Anderson, a well-known British historian of ideas and former editor of New Left Review, now in the twilight of his career, became a key voice within this crowded field. The debates provoked by Anderson’s analysis became crucial reference points for Gramsci scholars. The new volume reprints the original essay accompanied by extensive commentary by Anderson on its importance as well as characteristically acerbic responses to his critics.

The H-Word will, I suspect, appeal to a much smaller audience. Rather than focusing primarily on the Gramscian understanding of hegemony, Anderson sets out to trace the different ways in which the term has been employed by political thinkers beginning with Homer and Herodotus all the way to the 21st century. The word itself is the focus, not any particular theoretical underpinning. Since hegemony has been ascribed many different meanings by as many writers, the book does not tell a coherent story but instead moves to and fro in time and space as best suits the author’s framework and interests.

The result is in some ways impressive. Anderson deploys his formidable erudition to craft short chapters on the conflicting understandings of hegemony among Ancient Greek and Roman historians, Russian revolutionaries, Prussian military theorists, Italian communists (where Gramsci shows up), Anglo-American international relations scholars, Chinese statesmen from Confucius to Mao, post-structuralist Marxists (where Gramsci reappears), and the architects of the European Union. This is accomplished with admirably clear and jargon-free prose, and the book is a pleasure to read. There is no payoff at the end, however; no meaningful conclusions can be gleaned from the peripatetic travels of a malleable, and therefore infuriatingly vague, term. The H-Word comes in as a minor work late in the career of a major scholar. It is occasionally self-indulgent and, on one unfortunate occasion, unnecessarily mean spirited.

The principal difficulty in developing a coherent sense of the evolution of hegemony as a concept is the parallel existence of “two streams of thinking”: the first interested in relations of power between states, the second in relations of power between classes within a state (107). The former can be traced back to the Greece of Homer and Herodotus – ‘of course, the origins of the term hegemony are Greek’ (1) – as well as, Anderson claims, relying on somewhat facile cultural translation, to the China of Confucius and Mencius, but it only received a “full-blown” theoretical treatment in the 1930s by the capable hands of the German jurist Heinrich Triepel. The latter was developed by socialist and anarchist thinkers in pre-revolutionary Russia, but their contributions were minimal compared to the seminal treatment of hegemony by Gramsci. Anderson chooses to tell these two stories simultaneously in a sequence of chapters that is more or less chronological, and as a result, it is often the case that the end of one has little to do with the beginning of the next.

In fits and starts, the reader is shown a series of times and places in which writers interested in inter-state politics happened to adopt the word. Anderson takes advantage of the brisk pace to sometimes advance unsupported assertions about why and how the term gained or lost popularity. For example, while it is found in Classical Greek sources it is almost absent from their Roman analogues. This, Anderson claims, is because the expanding Roman Republic ‘did not require’ the term (6). Likewise, after the signing of the Treaty of Versailles ‘hegemony faded from official discourse’ (35) because, Anderson contends, Britain and the United States “disavowed” that they were hegemonic or intended to become so (which does not explain why politicians or scholars from other countries followed suit and stopped using the word).

The whirlwind literature review outlines how scholars since Triepel have disagreed about the very meaning of the word, let alone how to employ it as an analytical tool. Thus, while for Triepel ‘hegemony was a type of power that lay between “domination” and “influence” – hegemony was stronger than influence but weaker than domination’ (31), for later thinkers the term had other significations. Ludwig Dehio believed that hegemony is ‘a power greater than any other, and so a threat to every other’ (42); Rudolf Stadelmann stated that it was ‘a guided balance’ through which ‘a power which was cautious and respected’ watched over the international system (45); and John Mearsheimer wrote that a hegemon is ‘a state so powerful that it dominates all the other states in the system’ (177). Anderson explains each view clearly and generously, with one salient exception. For some reason, he cannot hide his contempt for the Anglo-American tradition in international relations known as “realism”.

While Anderson is never shy about expressing his opinions about the quality and merits of others’ works, his animosity towards realist scholars seems personal. Unlike any other theoretical approach in the book, Anderson rejects realism on moral grounds: ‘As an outlook it not only lacked emotional appeal, but more importantly a sense of the utopian passion for justice inherent in human nature, incapable of reconciliation with the idea that might makes right’ (37). More jarringly, his discussion of the German-American thinker Hans Morgenthau quickly turn from harsh criticisms of the work into venomous ad hominem attacks. Anderson mocks Morgenthau’s “bombast” (52) and “incoherencies” (53), and portrays him as unscrupulous, status seeking, insecure, ignorant, and intellectually dishonest. Morgenthau was, in Anderson’s telling,  ‘temperamentally disinclined to acknowledge any debt, perhaps because he so often borrowed from others’ (53). There’s no escaping the sense that Anderson is settling some sort of old score with Morgenthau in public. This adds nothing to The H-Word and is frankly unbecoming of any serious work of scholarship, let alone one by so accomplished a scholar as Anderson.

On the second stream of thinking about hegemony, focusing on relations between classes, Anderson has much more to say. Given his deep knowledge of Gramsci, the brief summary of the Italian’s theorizing of hegemony is unsurprisingly masterful. While for Russian revolutionaries, most notably Lenin, hegemony addressed ‘the role of a working class in a bourgeois revolution against absolutism’, Gramsci approached it ‘in a heuristic form with an intellectual range that transformed it into a far more central concept’. His ‘key move was to generalize it beyond a working-class strategy, to characterize stable forms of rule by any social class’ (19). For Gramsci, hegemony ‘acquired two enlargements of meaning in tension with each other. It now included both the extraction by rulers of consent from the ruled and the deployment of coercion to enforce that rule. […] Gramsci’s intention was to conjugate the two’. Unfortunately, Gramsci’s Prison Notebooks ‘were fragmentary and exploratory, not finished or cohesive, allowing for oscillations or inconsistencies in expression’ (21).

In a handful of pages, Anderson amply demonstrates Gramsci’s significance and the reasons why he remains a touchstone for socialist thinkers the world over: ‘What had to be explained were the ways in which […] an exploitative order was capable of securing the moral consent of the dominated to their own domination. Such ideological dominion, Gramsci argued, must propose a set of descriptions of the world, and the values that preside over it, that become in large measure internalized by those under its sway’ (21). But, Gramsci recognized, below the stability achieved by this worldview, there always existed the threat of domination by force. ‘Hegemony was polyvalent: unthinkable without assent, impracticable without force’ (23). Gramsci’s thought aimed to produce ‘a unitary synthesis of history and strategy, covering at once the legacy of the pre-capitalist past, the pattern of the capitalist present and the objective of a socialist future’ (78). He transformed the idea of hegemony ‘from a merely political to a moral and intellectual form of leadership, an understanding that the subject of a hegemony could not be any socio-economically pre-constituted class – but had to be a politically constructed collective will’ (94).

Anderson is just as good when discussing Gramsci’s heirs. Chapter 8 should hold particular interest for political theorists interested in the development of Gramscian insights by later scholars, including Stuart Hall, Ernesto Laclau, Chantal Mouffe, Ranajit Guha, whose Dominance without Hegemony Anderson declares ‘the single most striking work ever inspired by Gramsci’ (102), and Giovanni Arrighi, who attempted to synthesize the inter- and intra-state notions of hegemony. The fact that Podemos, the left-leaning Spaniard political movement born out of the most recent financial crisis, uses Gramscian terms in its political discourse earns it a mention or two (e.g., 95). Less fortunate are non-European movements that do the same, such as the Zapatista Liberation Army in Mexico, who are completely ignored.

While the sections on Gramsci and his intellectual successors are superb, the discussion of China is perfunctory and unsatisfying. Indeed, it may not even belong in the book. Anderson takes it for granted that the Chinese term ba is analogous to hegemony because that’s how Western historians often translated it (117-118), even though on other occasions ba was rendered as ‘domination’ instead (139, n. 28). Certainly China’s Warring States Period (574-221BC), during which Confucius and his followers spoke of baquang and other such terms, was in many ways similar to Ancient Greece before the Alexandrian conquest. But that does not mean that the word hegemony is important for understanding the period. There are plenty of historical examples around the world that could be analyzed through the prism of hegemonic politics. The fact that China’s current government is Communist does not help explain how its case fits in with the rest of the volume.

Equally unnecessary is Anderson’s running commentary in the last few chapters on the current role of the United States as now-you-see-it-now-you-don’t global hegemon. Anderson gives pride of place to current analyses that agree with his own view, such as Charles Doran (62-63) and Susan Strange (73-74), but his notions on the subject seem stuck in the George W. Bush years or, worse still, in the Vietnam era.