Marx & Philosophy Review of BooksReviews‘Why Only Art Can Save Us: Aesthetics and the Absence of Emergency’ reviewed by • Silvia Mazzini 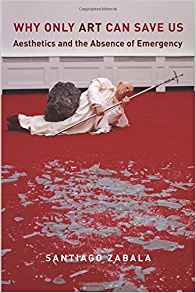 Santiago Zabala
Why Only Art Can Save Us: Aesthetics and the Absence of Emergency

Silvia Mazzini is Assistant Professor at the University of the Arts in Berlin. She is currently …

Despite what its title might suggest, the aim of Santiago Zabala’s most recent book, Why Only Art Can Save Us, is not aesthetic but, rather, exquisitely political. Of course, even a cursory look at the book’s index evinces a rigorously philosophical outlook, and the body of the text itself is an aesthetic analysis of twelve works by contemporary visual artists, supplemented by an organic theoretical treatment developed in the first and third part of the book. These elements, however, act as a hinge, thanks to which one can open up, like a sudden lightning strike, a powerful call to political reflection and political praxis: a call that emerges not primarily from theory, but in and from the artworks discussed—a call, as the author himself underlines, that ‘we can no longer overlook if we care about our social, urban, environmental, and historical salvation’ (110).

Following Heidegger, Zabala believes that, in the era of globalized capitalism, every financial, cultural, and political phenomenon is reduced to an objective scale. Within such a system, then, only what falls within and is framed by the parameters of realism and scientific calculability is recognized as real, while all the rest is omitted, hidden, not considered or left to the margins. Put otherwise: because such a system claims for itself a monopoly of truth, proclaiming itself unique and absolute, within it there is no space for difference to emerge. In this sense, there is a “lack of emergency” within it—and precisely this, Zabala emphasizes, is the greatest emergency of all. Art (rather: a certain type of art) is, however, capable not just to inform us of this emergency, but also and especially to immerse us in it, to make us participate in it, to position us in front of it—to ‘call into question our comfortable existences’ (111) and enable us to respond to it as an existential call. I will return to this point, which has rich implications and great present-day relevance, which might be uncomfortable (but is necessary nonetheless!) for us as Marxists, post-Marxists, or ‘non-non-Marxists’ as Ernst Bloch put it.

Zabala does not conceal the fact of being a partisan for what and who is left to the margin, insofar as they do not correspond to the image of the world imposed by the capitalist system. These margins are, in philosophical terms, the ‘remains of being’ (a phrase that served as a title for his 2009 book). They represent an alternative in which it is worth the risk to hope for and to invest in an important albeit ‘weak’ alternative—actually, one that is important precisely because it is weak (it is worth remembering here that Zabala was and is one of the most brilliant disciples of Gianni Vattimo, the founder of the so-called ‘weak thought’, now known with even greater political echoes as ‘the thought of the weak’).

Starting from these presuppositions, Zabala, in the second chapter, analyzes twelve works by visual artists who illustrate in a surprisingly clear and striking way what the first, theoretical section adumbrates. These works have no pretense to normativity and are not themselves representative of what art is or should be. Zabala reminds us, in fact, that even within the capitalist world there are artists and artworks that are completely integrated into the dominant system and reinforce its structures and ethical/aesthetic implications. The twelve works were chosen instead because they are capable of showing perfectly the kind of art that is capable of disclosing the emergencies of the present-day and, in so doing, saving us from them. But how?

Through photomontages showing the Twitter logo in an industrial turkey farm, by way of imposing open-air sculptures made up of abandoned plastic bottles that will never decompose, with wax figures of Palestinian refugees accompanied by audio and video testimonials, along with several other examples, the artists chosen show us political, financial, and technological paradoxes that frame our social lives, problems raised by urban slums, e-waste, or plastic, the environmental emergencies or ignored histories. kennardphillipps, Jota Castro, Filippo Minelli, Hema Upadhyay, Wang Zhiyuan, Peter McFarlane, Nele Azvedo, Mandy Barker, Michael Sailstorfer, Kardy, Alfredo Jaar, and Jane Frere come from the most disparate corners of the earth and operate according to different styles and modalities, but, for Zabala, their works have something precious in common: they know how to present alterations in an incisive way.

‘These alterations produce disruptions that require interpretations, response, and intervention instead of contemplation’ (23). Alterations are a shock, a rupture, a leak. And it is precisely through these leaks that the other, the different, has a way of entering into contact with us. Alterations, in fact, break through the unitary and seemingly inexpungible ‘picture of the world’ that capitalism advances, breaking this ‘frame’ and showing the justificatory insufficiency of purely scientific paradigms. All this forces us in some way to find an explanation, to expand the points of view that we formerly had to interpret this new event and ‘update’ our picture of the world. Here it is worth remembering that this is an original and, at the same time, faithful elaboration of the hermeneutic theory that, from Heidegger to Gadamer and passing through Pareyson and Vattimo, upholds the ontological, and not only literary, juridical, or religious, character of the science of Hermes. For hermeneutic ontology, in fact, the encounter with a book or a work of art, like the encounter with a person or a landscape, is an experience, a journey (Er-fahrung) that cannot leave us unchanged, but which brings a change in ourselves, in our way of hearing and feeling things, in our Weltanschauung. To encounter a work requires us to enter into dialogue with it, to start a conversation, an exchange. But if, for Gadamer, this operation brings forth a fusion of horizons, Zabala, following Vattimo’s steps instead, underlines and defends the (productively) disturbing character of the clash (Streit) of interpretations. The aim, then, is not for everyone to think the same way, but for everyone to exchange different opinions, to live with the different, and put this difference to work. The exchange of different interpretations proposes a model of anarchic truth—in which anarchy, following Schürmann, is not understood as the absence of rules, but the absence of a single, universal, and indisputable rule. Interpretation is an anarchic action, then, insofar as it can never aspire to absolute completeness, insofar as it is not subjugated to the authority or the hegemony of a single interpretation.

The novelty of Zabala’s emergency aesthetics resides in its locating the salvific effect of the work of art in the horizon of an anarchic theory of interpretations and, in particular, in the call that the encounter with the work of art aims continuously at each one of us. ‘The truth of art no longer rests in representations of reality but rather in an existential project of transformation’ (7). Understood in these terms, interpretation is already an action that adds vitality, and art is a constant mobilizing toward battle—even and primarily a battle with ourselves, insofar as the shock produced by works of art presupposes the casting into doubt of ‘our’ truths, of paradigms and ideas that first seemed certain, but which now are no longer enough to ‘encounter’ what lies before us. This does not imply that we have to abandon our political positions, our choices or allegiances: what is asked of us is rather to always consider the other, to fix our ideas and our political praxis with each situation with which we are presented, so as to avoid applying principles in an automatic way.

In other words: even the early twentieth century avant-gardes, not to mention Benjamin and other thinkers, have underlined the beneficial effect of the shock produced by works of art. This small electric shock awakes us from our slumber and makes us feel like we are on the right side (we should admit once in a while, don’t leftists always feel like we’re in the right?), stimulates in us debates over and re-visions of the frames with which we interpret the world, thus opening up a new world, a new way of seeing the world, a general reconsideration of our way of standing in it. This new way is an ‘adventure of difference’ (Vattimo), a coming-into-relation that is always renewed with tradition, in continuously enriched contact from interpretations with and of others.

The aesthetics of emergency, then, has nothing in common with state of emergency theories like those of Schmidt or Agamben and, in fact, contra Agamben, Zabala does not set forth a theory of positive passivity, or a present absence from the world. In fact, radical instability leads to a complete and even existential immersion in present-day emergencies. ‘We cannot simply observe, describe, and understand emergencies without being part of them’ (112). In this sense, we participate in emergencies, we all become the emergency. This participation often brings with it an aesthetic praxis of participation, as we have had the chance to notice in the most varied artists, from Tino Sehgal to community theater to urban gardens, in which the public (the word is not an accident, but alludes to the etymological and politic roots of the res publica) is the engine and actor of the artistic event. All of this is celebrated with great interest by Zabala, but it is not the central aim of this aesthetics of emergency. Zabala casts his focus on the existential claims of art, which call into question our ‘comfortable existences’ (111), reminds us to always be open to revision and enables us to respond with political praxis. It has to do with a warning of great importance, which is democratically addressed to everyone and in equal measure: yes, even to whoever seeks to rebel against the political and financial framework of capitalism, to engage with struggle for the environment, to bring a voice to the voiceless. Today’s capitalism, in fact, as Hardt and Negri observe, is capable of appropriating the different or, in Zabala’s terms, of normalizing it and reintegrating it into its system, thus neutralizing emergencies. The large corporations dedicated to developing organic products to increase its sales (even McDonald’s sells “organic” products!); the adoption of political correctness by Wall Street bankers, countries’ displays of shame and remorse for past genocides, all these show us how everyone—even us—has to put into doubt his or her Weltanschauung, to find new horizons, to open new tears to allow for emergencies to puncture the dominant “picture of the world” and to give space, anarchically, to what is always new and different each time.