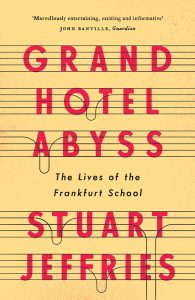 Grand Hotel Abyss offers an accessible, exhilarating history of the Frankfurt School. The cast of characters extends far beyond the central troupe of Theodor Adorno, Max Horkheimer, Erich Fromm, Herbert Marcuse, and Walter Benjamin. Jeffries interweaves analysis and anecdotes on thinkers as diverse as Angela Davis and Ian Fleming, Alain Badiou and T.S. Eliot, Marcel Proust and Stanley Fish, and Richard Sorge and Siegfried Kracauer. Grand Hotel Abyss will be of particular interest to scholars of Critical Theory, twentieth-century intellectual history, political theory, international relations, and cultural studies. While Jeffries cites extensively, and this work is a Verso publication, this is not a purely academic text, and (framed most crudely) should be approached as a vivacious group biography of substantial academic merit. This is by no means a criticism, and the read is all the more charming and engaging for Jeffries’ genre and style.

Indeed, perhaps Jeffries’ greatest achievement is the manner in which he humanises some of the most austere, (philosophically) negative, and intellectually intimidating thinkers of the past century. Drawing on innumerable letters, published diaries, biographies, auto-biographies and his own substantial research, Jeffries draws out the intense and evolving relationship between these idiosyncratic theorists and their work, and eloquently illuminates the extent to which crude contingency shaped their philosophies and output. Jeffries succeeds in making this a truly personal, truly human illumination, be it presenting Marcuse’s letters addressing Adorno ‘dear Teddy’ (341), or Adorno signing off his missives to his parents affectionately, with ‘heartiest kisses from your Hippo King’ (212). Jeffries recounts how a young Horkheimer’s illicit romance with a distant cousin has him scandalising his bourgeois family, fleeing a pistol-packing uncle straight into Police custody. Having read Grand Hotel Abyss one cannot help but view these formidable, Appollonian dialecticians in a new, and substantially more personable light.

What is perhaps equally striking is the social circles which the Frankfurt School scholars inhabited. It is a star-studded cast; Adorno plays Verdi at a dinner party in Malibu. Who is providing a parodic mimicry? Charlie Chaplin, of course. After the musical interlude, flustered handshakes with Hollywood stars, perhaps more recitals from Thomas Mann’s Dr Faustus, just head a little East into Pacific Palisades. It is not just Adorno who is presented as an embodied, breathing subject. Jeffries should be credited for showing the sublime excess of talent floating adrift in the interwar and exile years. It is Arthur Koestler fleeing with Walter Benjamin, and on the figurative next page, Ludwig Wittgenstein is attacking Karl Popper with a poker.

But it would be deeply unfair to Jeffries to present Grand Hotel Abyss as built on salacious gossip, as some bloated Heat magazine supplement for the modern-day Frankfurt School acolyte. Throughout, Jeffries is thoroughly immersed in critical and historical theoretical commentary, be it through turns to the established historians of the Frankfurt School, Martin Jay and Thomas Wheatland, or the unorthodox Stephen Schwartz’s commentary on Benjamin’s demise. Ultimately this is a highly engaged portrayal of the Frankfurt School’s output, especially the work of the so called ‘first generation’. Jeffries should be commended for his analysis of both Negative Dialectics and Dialectic of Enlightenment. Both texts are presented with a rare lucidity, making their core submissions accessible to even an unfamiliar reader. This is no small feat. Jeffries’ clear, and impressively detailed account of Erich Fromm’s dispute with Herbert Marcuse, as played out in Dissent, should also be acknowledged. Not only does Jeffries succeed in producing an accessible commentary, he is truly alive to the theoretical and intra-disciplinary nuances at work in what can at first seem more clash of egos than intellectual contretemps.

Jeffries’ engagement with Walter Benjamin is also particularly impressive. Drawing on Proust, Baudelaire, Brecht and Goethe, Jeffries artfully positions Benjamin as ‘The Last European’, a figure who effortlessly elided disciplinary and cultural boundaries. While it is perhaps Adorno who most immediately comes to mind when one considers ‘The Frankfurt School’ in abstraction, Benjamin plays a clearly dominant role in Jeffries’ narrative. It is with an extended analysis of Berlin Childhood Around 1900 that the book commences. It is indeed an ‘exquisitely suggestive memoir’ (29), with its lilting, melancholic submission to transience. It is a fitting and beautiful way to pass through the gates of the Grand Hotel Abyss, entering to the siren call of aesthetic merit, commensurate with its apparent incompatibility with praxis. Benjamin is, of course, endlessly quotable. His aphoristic and eschatological turns are mesmerizing. Indeed, the unenviable task of determining which Benjamin quotations to exclude must have been a painful one. However, Jeffries integrates his quotation and his analysis seamlessly, and is not afraid to quote at length when needed. A case in point is Jeffries’ engagement with Benjamin’s discussion on Paul Klee’s Angelus Novus in Theses on the Philosophy of History. Jeffries draws out with beautiful simplicity Benjamin’s argumentation, while retaining the aching pathos of his delivery. Jeffries is perhaps at his very best when he writes about Benjamin.

While I broadly commend Jeffries for this theoretical engagement, and indeed the praise could perhaps be piled even higher, I raise two areas of the mildest critical consternation.

Firstly, Jeffries’ otherwise impressive analysis does not explicitly engage with what has increasingly been framed as the true ‘explosive charge’ of Critical Theory: the concept of ‘social pathology diagnosis’. Axel Honneth (2004, 2007), current chair of the Institute for Social Research, the symbolic home of the Frankfurt School, has written extensively about the centrality of this heuristic to the potency of the Critical Theoretical project. The precise nature of social pathology diagnosis, and what constitutes a social pathology, is one of the most contested social theoretical debates in contemporary Critical Theoretical scholarship. There is a special issue of The European Journal of Social Theory forthcoming engaging with exactly this discussion. To diagnose social pathologies is to social-theoretically tackle the social ‘wrongs’ which are not immediately accessible within the traditional rubrics of ‘social injustice’ or ‘social illegitimacy’. For the residents of the Grand Hotel Abyss it was the ‘form of life’ that is found-wanting: they were presenting a truly excoriating, at times truly totalising, critique. The theoretical infrastructure of social pathology is increasingly acknowledged as central to their capacity to engage meaningfully in such an endeavour (Freyenhagen, 2015). It would thus have been of real interest to see Jeffries engage with his characteristic clarity on this crucial, and increasingly discussed, aspect of Frankfurt School’s thought.

Secondly, Frankfurt School inspired Critical Theory is currently engaged in a fierce conflict, suffering a profound identity crisis. Michael J. Thompson’s (2016) much discussed The Domestication of Critical Theory presents a damning indictment of recent developments in the interdisciplinary project; narrating the ascendancy of a philosophically unsound, and politically impotent, ‘neo-Idealism’. For Thompson, the dominant Critical Theoretical representatives have lost their way, have become apologists for capitalist modernity. Habermas, Honneth (and to some degree Forst) increasingly imbue intersubjective processes with a transcendent, emancipatory potential, incompatible with the manner in which capitalistic structures were deemed to reify consciousness in the work of earlier Frankfurt School theorists. It is not that Jeffries is entirely silent in this debate, he offers one deep, if oblique, jab at Honneth as presenting ‘a parody of recognition’ (388); yet there is no sustained critique here. Unlike Chip Lambert, one senses Jeffries will not be dethroning his shelves of his Minima Moralia and his Dialectic of Enlightenment. And yet there is frustratingly limited engagement here, perhaps Jeffries, like so many of the characters he depicts, is reticent to engage in the rough and tumble of praxis. The final pages, symbolically (or not) see the author returning to the aesthetic dimension, there is no elegiac call to arms. In true Frankfurt School style, rather, there is a call to cognition. Jeffries leaves us pondering on the impossibility of, and necessity to, think differently; to think critically. Such an injunction would be well directed to the latest developments in Frankfurt School Critical Theory.

But perhaps that is being too harsh on Jeffries. In a little under 400 pages he has walked us through over a hundred years of world history and philosophy. And it is a spritely sojourn. Grand Hotel Abyss is at its best when it sticks to its strengths: offering detailed, located and immensely human engagement with the ‘first generation’ of Frankfurt School scholars. Jeffries’ text would be an ideal accompaniment to Martin Jay’s (1973) The Dialectical Imagination: A History of the Frankfurt School and the Institute of Social Research and Thomas Wheatland’s (2009) The Frankfurt School in Exile.