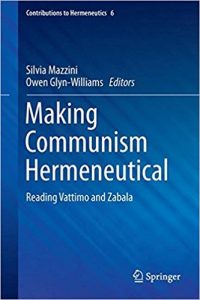 Lev Marder holds a PhD in Political Science from the University of California-Irvine. His broad …

Herbert Marcuse quickly abandoned his brief attempt in the early 1930s to revitalize and ground Marxism by augmenting it with Heidegger’s hermeneutics or existential understanding of being in this world. In large part, Heidegger’s cozying up to Nazism made it difficult for Marcuse to continue the project. Until Gianni Vattimo and Santiago Zabala published Hermeneutic Communism in 2011 (reviewed here), there have been no similar bold attempts by such high caliber thinkers to again consider the potential of the fusion between hermeneutics and Marxism. For Vattimo and Zabala, both Marxism and hermeneutics can serve as guides to fight for the weak against oppression, and oppressive metaphysical impositions. This commonality demanded that at least another attempt be made to combine their forces and it served as the impetus for Vattimo and Zabala’s Hermeneutic Communism (2011). Making Communism Hermeneutical: Reading Vattimo and Zabala (2017) is a collection of critical responses to Hermeneutic Communism edited by Silvia Mazzini and Owen Glyn-Williams.

The edited volume keeps the conversation about Marxism and hermeneutics going. After each chapter, Vattimo and Zabala briefly respond to the critical analysis so as to ‘establish a (double) conversation, in the best hermeneutic tradition” instead of polishing the “only good or “real” interpretation’ (xv). The objective is to generate conversations that continue to spawn interpretations and disrupt the perpetuation of the dominant interpretation that, in reductive terms, insists on the inevitability of capitalism for the foreseeable future. In entering these conversations, Vattimo and Zabala deny that they own or know the true meaning of their project and instead allow for the truth to emerge through the conversations.

The conversations revolve around three themes, with a part of the collection devoted to each of them: hermeneutics, weakening, and communism. This effectively documents the provocative and great strides that the original work has made in three areas: first, in defending hermeneutics as opposed to metaphysics and carving out a space for it in political activism; second, in showing its relation to political activism on behalf of the weak—that weak thought, as intended by Vattimo, offers resources to the weak in struggles against capitalist oppression; finally, it documents how hermeneutics can specifically be married with communism.

Very appropriately, the collection opens with a section on hermeneutics, addressing challenges to the political import of hermeneutics. For one, Eduardo Mendieta questions if politics should even be based on philosophy or hermeneutics (3-14). Jeff Malpas and Nick Malpas suggest that truth is still necessary as the objective of hermeneutics (19-30). Peg Birmingham considers if Vattimo and Zabala rely on principles and therefore truth rather than interpretations, while also opening a new frontier for conversations by linking Hermeneutic Communism with Hannah Arendt’s understanding of political action (53-62). These contributions give Vattimo and Zabala an opportunity to clarify some of their ideas and particularly how they think their project is future oriented rather than being bound to the truth of the present or the past.

Six years passed since the publication of Hermeneutic Communism and in that time Hugo Chavez, whom Vattimo and Zabala at the time offered as a model for Barrack Obama, passed away and Venezuelans today find themselves in dire conditions. Vattimo and Zabala now point to Podemos in Spain as the harbingers of change—as one of the forces showing how the dominant framing of democracy, which favours the dominant can be re-framed, re-interpreted to favour the weak (15, 126, 152). The claim is that hermeneutic communism cannot be rejected outright by associating it with Chavez any more than hermeneutics can be rejected due to Heidegger’s Nazi leanings, or communism can be rejected due to the many faults of the Soviet Union.

The next set of conversations, in the second section, “Weakness”, addresses the means and ends of weakening dominant structures through hermeneutics. They range from comparing the critical tools of hermeneutics with phenomenology (85-93), critical theory (95-112) and Daoism (153-60) in serving the interests of the oppressed to a discussion reminding readers that this tool is not non-violent and not immune to reinforcing hierarchies (127-34).

All of these contributions, even in their criticism of Hermeneutic Communism, fulfill the original purpose of the text to once again, and through conversations, bring serious attention to the ways in which hermeneutics could lead to emancipation and the possible limitations of this tool. If Vattimo and Zabala have given a reductive portrayal of capitalism, the weak, and exaggerated the power of hermeneutics, their interlocutors are quick to expose the gaps, offer alternatives, and push the adherents of hermeneutic communism to clarify and improve their conception. The engagements also highlight the project’s cosmopolitan character in that it prompted the distinct responses of Jeff Malpas from Australia, Silvia Mazzini from Germany, Liu Liangjian from China, American thinkers including Babbett Babich and William Egginton and others.

However, these conversations are missing participants whose voices could have considerably heightened the critical engagement with hermeneutic communism. At least three voices in particular stand out. First, Francis Fukuyama, whom Vattimo and Zabala present as a metaphysician par-excellence in Hermeneutic Communism, has no response here. A conversation between Fukuyama and the authors of Hermeneutic Communism in this collection would have defined for the readers the terms of debate concerning the alternative to the contemporary forms of democracy and capitalism rather than almost by default reaffirming Vattimo and Zabala’s position on their own terms. Second, Dimitri Ginev has published several papers questioning the political orientation of Hermeneutic Communism, since its publication in 2011 and his critical voice, a conversation with him, could have also produced valuable insights into the kind of community that Vattimo and Zabala envisage. Lastly, Making Communism Hermeneutical: Reading Vattimo and Zabala does not include an explicit feminist critique. The attention that the original work and this collection pay to interpretations and how they can facilitate emancipation beg for a feminist critique, for a comparison with standpoint theory, and at least with Donna Haraway’s politics.

On the one hand, all these omissions weaken the collection’s intensity. On the other hand, they signify that Making Communism Hermeneutical: Reading Vattimo and Zabala is just the next stage in the project and hopefully this serves as an invitation for another volume of critical engagements continuing and broadening the conversations.