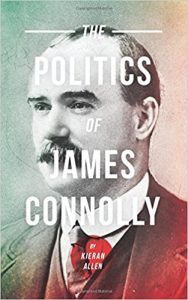 James Connolly, who was born in Edinburgh in 1868 and died at the hands of a British army firing squad in 1916, is unrivalled as a revolutionary figure in both Ireland and Scotland. He is an iconic figure, like Che. A working-class Marxist who led an uprising that, while defeated, lit the flames of the Irish War of Independence. Kieran Allen, a committed Irish Marxist and a Sociologist based at University College, Dublin, has provided a concise, clear and readable account of Connolly’s politics.

The Easter Uprising of 1916 was led by James Connolly, whose small Irish Citizens Army, a well drilled Marxist militia, joined with members of the Irish Republican Brotherhood. The plan was to seize Dublin, which would act as signal for the Irish population to rise and expel the British forces out of Ireland. Connolly, it is said, assumed that the British forces would be reluctant to bombard the centre of Dublin because of the damage this would cause to the property of the rich and powerful. The uprising was soon defeated; it failed to inspire support from the Irish population, the British Army rushed in troops and the Navy commenced with a brutal bombardment. After six days Connolly and other leaders of the uprising surrendered. There followed the execution of key leaders, including Connolly, who was so badly injured he had to be tied to a chair to face the firing squad. Revulsion at these executions led to resentment and the successful War of Irish Independence from 1919 to 1921 is widely seen as a result.

The Easter Uprising proclaimed the creation of an Irish Republic. Connolly was an advocate of a socialist republic, and the legacy of his mixture of Marxism, critical Celtic enthusiasm and republicanism have endured to this day. Indeed, while he was alive the socialist organisations he was associated with were tiny, and Irish republicanism was largely hostile to the left. He can be said to have produce a specifically Irish socialist republican tradition. The entire Irish left reference his name and ideals, typically Sinn Fein, the political party associated with the Provisional Irish Republican Army, now the third largest party in the Irish Republic and the second largest in the North, give him prominent place.

Connolly, with his short moustache is a literal icon, to be seen on flags, stickers, posters and the like. I have, for example, a Connolly key ring. His legacy is more than as a symbol of Irish independence. He became a socialist as a young man in Scotland and threw himself into political organising. He was involved with a string of early socialist organisations and spent time in the USA as a professional organiser for de Leon’s Socialist Labour Party. His family were of Irish descent and on moving from the USA to Ireland he became a trade union organiser as well as founding several Irish socialist political parties. He helped write for, and edited, a number of socialist newspapers. His literary output was considerable and included the monumental Labour in Irish History. Not only was he a working class leader but he was of working class origin; his father was a night soil man who literally collected the shit in the slums of Edinburgh. Connolly’s formal education was modest in the extreme but his intellectual achievements vast.

Kieran Allen provides the biographical detail for Connolly and places his work and thought within the context of Irish independence struggles and developing Marxist thought at the time of the First World War. I have a few criticisms of the book, but Kieran does a service to those who wish to learn more about Connolly. With the current rise in interest and activism on the left in both Ireland and beyond, it is very good to see this book back in print, Connolly, I would argue, remains relevant today.

Kieran Allen provides a good thumbnail sketch of the politics of Irish independence struggles from the 1890s to the Easter Uprising. Ireland was, of course, Britain’s oldest colony. The Irish Independence Party pursued a parliamentary campaign but was gradually eclipsed by more militant forces. Irish nationalism was dominated by often conservative Catholic opinions and many of its leading figures were explicitly hostile to socialism. Connolly recognised the importance of promoting Irish freedom and argued that it was possible to work with non-socialists in a common struggle. Despite this, he was clear that Irish independence was both necessary but insufficient, noting:

If you remove the English army tomorrow and hoist the green flag over Dublin Castle, unless you set about the organization of the Socialist Republic your efforts would be in vain. England would still rule you. She would rule you through her capitalists, through her landlords, through her financiers, through the whole array of commercial and individualist institutions she has planted in this country and watered with the tears of our mothers and the blood of our martyrs. (Connolly 1997, 124)

The wider context of Second International socialism is also outlined. After Marx died in 1883, mass socialist parties emerged, most notably in Germany in the form of the SPD. Marxism was becoming a large-scale movement and Marxists organised under the banner of the Second International. Engels worked to popularise Marx’s work and the labour movement in many countries took on a Marxist flavour. There were several severe problems with what appeared on the surface to be an accelerating international revolutionary force.

The so-called classic Marxism of the period tends to stress the historical role of the working class as an inevitability rather than as an intervention within a particular conjuncture. With electoral success in Germany, reformism via thinkers like Bernstein, suggested that a non-violent constitutional politics was more appropriate than revolution. The destruction of the Second International, although a direct result of the First World War, was over determined by this lack of theoretical sophistication and the growth of reformism. Famously, the various national sections of the International, including the socialist parties in France and German, voted to support the war.

Connolly and Lenin were notable as opponents of the First World War. In 1916, Liberty Hall, which was the headquarters of Connolly’s Irish Citizen’s Army, was wreathed in a giant banner which read ‘’We Serve Neither King nor Kaiser, But Ireland.’ Lenin’s politics were based on the need to intervene to promote revolution rather than waiting for history to take its supposed Marxist course. In turn he argued that the First World War was a creation of imperialist rivalries and that revolts against imperialism contributed to human liberation.

While Kieran Allen does a decent job of outlining the complexities of both the Irish context and that of the international Marxist movement, his prose can at times seem a little didactic. Too often perhaps a revolutionary ideal in the form of Lenin is used to assess Connolly’s worth. Clearly Connolly is not Lenin, and assessing the former by examining the latter does not provide a fully rounded critique. Nonetheless the criticisms advanced of Connolly are sympathetic and largely appropriate. Connolly was not a theoretician in the same way Lenin was. It might also be argued that he was prepared to make compromises with Catholicism and nationalism that might be seen as diluting Marxist commitments to a secular and internationalist future.

As an icon Connolly often seems more like a symbol of revolutionary virtue than a political leader struggling in difficult circumstances to create change. He is often appropriated, as Kieran Allen notes, by conservative Irish nationalist who seek to down-play his Marxist commitment. In turn, the Communist Party of Ireland have tended to show Connolly as the Irish Lenin. Connolly was intellectually strong, self-critical and tactically flexible, as such I guess he would have advocated seeing his own thought and action as imperfect but advancing.

There are two other weaknesses with the book, one historical the other contemporary. While it is difficult to provide detail to all the important relevant debates and contexts, it would have been good if more detail of Marx and Engels commitment to Irish freedom had been discussed. Engels seems to have been introduced to the issue by Mary Burns, his Irish partner, and visited Ireland in the 1850s. He began to write a history of Ireland and even learnt Gaelic. Both Marx and Engels, like Connolly, were aware of an Irish primitive communism based on collective land ownership. Marx and Engels’ often enthusiastic but sometimes pessimistic estimation of Irish struggles would of course properly require a book length survey.

In contrast, in the 21st century Irish politics is rapidly changing. Sinn Fein, a party that claims to be both socialist and republican and promotes Connolly, is increasingly successful electorally. In turn, those on the left critical of what they would see as Sinn Fein’s reformism, are also growing, with People Before Profit electing Assembly members in the North and socialist TDs being returned to the Republic’s Dail. Clearly the situation has changed dramatically since Kieran Allen first wrote this book in 1990 and it is a shame that while it has been republished, it has not been updated.

What lessons does Connolly have for revolutionaries in 2018? He clearly shows that Marxist politics demands intervention; neither spontaneity nor an assumption that history will unfold in a series of fully predictable stages is sufficient. In turn, tactical flexibility is necessary. Connolly’s approach justifying armed struggle was necessary in 1916 but from social movement activity to electoralism, specific tactics will depend upon a clear analysis of a concrete situation. Working with non-socialist movements can be used to impart a socialist character to those one articulates with, although without strong practical and intellectual leadership the risk is that socialism may be diluted. Republicanism in the sense of a rejection of monarch and an embrace of deep democratic self-governance, must be an intrinsic part of socialism.

Connolly advanced Marxist philosophy through his deeds, while his texts are not as theoretically sophisticated as, say, Lenin’s or Gramsci’s, his words have the power to inform and enthuse. All serious socialists should read him. Kieran Allen’s book will encourage committed engagement with Connolly’s work, which is to be applauded. Connolly was a revolutionary and one of his weapons was song, ‘For our demands most moderate are, we only want the earth.’ Music is a way of mobilising Marxist commitment too. (Connolly 1997, 292)