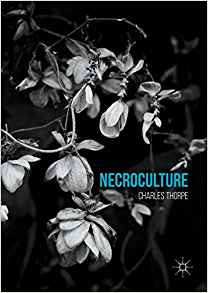 Charles Thorpe’s Necroculture is a social critique of late capitalism’s attraction to violence and to what is mechanized and lifeless. In addition, the book demonstrates the continued relevance of Marxist humanist Critical Theorist Erich Fromm, whose critiques of “necrophilia” and technocracy are featured prominently. However, many other theorists are employed, though more in passing; Zygmunt Bauman perhaps features second-most prominently. The book has five chapters, addressing economic relations, ecological destruction, transhumanism, pornography, and right-wing populism, respectively.

In the first chapter, Thorpe articulates capitalism’s reliance on what is “dead,” drawing on Erich Fromm’s association of the hoarding of wealth with “necrophilia” (analogous to Freud’s death drive). According to Fromm, the necrophilous are “zombies … whose soul is dead, although their body is alive … who chatter instead of talk,” who are chronically bored, who are attracted to “reports of crimes, fatal accidents, and other scenes of bloodshed and cruelty,” and who prefer gadgets and management to living beings and spontaneity (Thorpe 23, citing Fromm’s Anatomy of Human Destructiveness). According to Fromm and Marx, as Thorpe points out, capital is the rule of the dead over the living. When workers sell their labor time, their consciousness and potential creativity are reductively measured and increasingly replaced by machines. Their social identity and self-worth begin to depend on their possessions, and soon the workers absorb the public discourse that treats reality as a realm of objects in abstraction from human makers. Thorpe argues that late capitalism produces dependence on objects (phones, drone warfare, etc.) that separate their users from direct lived experience. As alienation accelerates, society is populated by the “living dead,” whose lives are consumed by the “dead time” of labor and the anomic, boring, death-like time of contemporary leisure. Finally, capitalism’s true character is expressed in the apocalyptic fantasy of the destruction of humanity and nature. As an economic system, capitalism ultimately rests on “exterminism,” the industrialized production of war and environmental devastation, a term Thorpe borrows from E.P Thompson and Rudolf Bahro.

Thorpe concludes the first chapter with a reflection on the vampire and the zombie in popular culture. While the vampire is aristocratic, individualistic, and romantic, the zombie represents the disenfranchised, excluded poor, rendered disposable through their exclusion from the economy. The identification with the vampire, and the enthusiasm for “prepping” to kill the zombie, represents a growing identification with exploiters against the exploited. The excluded of society, represented by the zombie, remind us of our own mortality, unfreedom, and precarious social position, through their evident “social death”; the desire to eradicate the zombie arises as a desire to be free of this reality (31). Thorpe identifies the zombie apocalypse both with a fear of loss (suggesting that one should save wealth, accumulate goods and guns, build a bunker, hunker down and prepare) and with a fatalistic apocalyptic fantasy of giving up, embracing the zombie-like future (33).

The second chapter addresses ecological destruction, beginning with species extinctions and the sequestration of remaining nature in zoos and preserves. An extension of this abstraction from nature is the genetic engineering of species for capitalist production, such as faster-growing salmon that need to be kept separate from existing ecosystems. Even the concept of “life” is breaking down, merging with the mechanical, Thorpe points out that a new scientific field devoted to “Artificial Life” is emerging, seeking to create “biological phenomena out of artificial components” (67). Building on this idea, “transhumanists” like Hans Moravec (Robot: Mere Machine to Transcendent Mind) and Ray Kurzweil (The Singularity is Near) predict an evolution beyond the biological to a future in which humans will achieve immortality through physical synthesis with machines; the technologized self could occupy more than one location at once, like a program running on multiple computers. To Thorpe, this transcendence sounds more like a new way to die than a new kind of life.

In Chapter 3, Thorpe expands his critique of transhumanism beginning with the concept of time. According to Thorpe, under late capitalism everything is changing, yet nothing is happening. Despite their apparent creativity, Kurzweil and Moravec simply assume that the transhumanist future will be capitalist. They conceive the future as a labor-free utopia (all work done by lesser machines) with constant innovation and space exploration. Today’s poor, however, are conceived less as potential recipients of the salvific project of technologized eternity than as outmoded entities that technological determinism will surpass. (After all, probably not everyone will be eligible for an upgrade to immortality right away.)

Transhumanism functions as an eschatology; the transhumanist end of history replaces early humanity’s harmony with nature by a new harmony with machines. As humans merge with technology, the universe becomes conscious of itself and transcends the bounds of space and time. The problem, however, is the lack of human agency. The subject of the transhumanist future is a human-machine amalgam in which individuals and the human species are surpassed. In short, it’s a nice promised land if you can be there to see it, but you can’t. Thorpe also points out that Kurzweil serves on a U.S. Army advisory committee and is active in the development of military artificial intelligence (129-30). He compares Kurzweil’s enthusiasm for powerful, “precise” military robots with Marinetti’s fascist futurism and “religion of speed” (131).

In Chapter 4, Thorpe explores the objectification of women in prostitution, human trafficking, and pornography, and briefly critiques sadomasochism/BDSM. Like Fromm, Thorpe believes boredom and sadism are interconnected. The computer, both a tool of labor and a means of amusement, helps to foster bored detachment and contempt, manifested not only in the growing abusive pornography industry, including child pornography, but also in trolling. According to Fromm, the chronically bored person “often is the organizer of a ‘mini-Colosseum’” of fantasies of cruelty (172). Pornography sadistically depicts and inflicts pain on women, who are described in pornography as “dirty,” “filthy,” and “nasty.” By contrast, lifeless technologized sex dolls and robots are referred to as “honey” and “sweetie.” In real relationships, the pornography addict struggles to see female partners as people and begins to feel “like a computer” himself (183).

Rather than repressing sexual desire, Thorpe argues, capitalism is “sexualizing”: “Frustrated as human beings, we are encouraged to seek satisfaction as sexual beings. Freedom is constructed as sexual freedom” (192). Since capitalism cannot satisfy a rich panoply of human needs adequately, it levels them, leaving the individual experiencing a “void” or, in the case of some pornography addicts, a “vertigo” (feeling of constant falling) (192).

In the final chapter, Thorpe shows how the basic human needs for individuality and community (a dialectical relationship that features prominently in Fromm’s writing) are left unmet by U.S. capitalist culture, especially by the growing fanatical free-market libertarianism of movements like the Tea Party. (The book was written before Trump’s election, but is frighteningly predictive of the cultural shifts of the past year.)

Building on Erich Fromm’s classic work Escape from Freedom (1941), Thorpe focuses his analysis on U.S. right-wing individualists’ obsession with “negative freedom.” In Escape from Freedom, Fromm built on Hegel’s distinction between negative freedom (“freedom from”) and positive freedom (“freedom to”), arguing that capitalism and the Enlightenment had produced negative freedom, but that humanity now needed an understanding of what freedom could be for. Otherwise, loneliness, anomie, and fear would lead to “escapes from freedom,” submission to new authoritarian and fascist movements in the future. Employing Fromm’s critique of negative freedom, Thorpe argues the U.S. right-wing authoritarian populism, for all its rhetoric of defending constitutional liberties and slogans like “Don’t Tread on Me,” is less a defense of liberty than an escape from freedom. He explains in this particularly trenchant passage:

In America, negative liberty is currently the key discourse of political reaction. It has a nostalgic and kitsch quality to it. Freedom from constraint seems today to be prized not so much for what one can do with it, but rather as a protection against the uncertainty that comes with social change. ‘Freedom from’ is sought less as freedom from authority than as freedom from disaster. Negative freedom today manifests itself as a flight from uncertainty towards sources of ontological security. Symbols of negative freedom, especially the gun and a fetishized Constitution, serve as sources of security of the self for lumpen and frightened elements of America’s middle class. The economic and political system they defend produces the insecurity that drives them more and more desperately to wave the banner of negative freedom (206).

According to Thorpe, the U.S. right-wing’s fascination with guns, the gold standard, and readings of the Constitution that resemble fundamentalist readings of the Bible (denying having any interpretive lens, ignoring historical context), all reflect the frantic pursuit of security by clinging to a kitschy, nostalgic past. Studying the National Rifle Association’s rhetoric, which treats “freedom” as a fragile family heirloom passed down carefully through the generations, and exploring George Zimmerman’s descent into classist and racist paranoia, leading to his killing of African American teen Trayvon Martin, Thorpe demonstrates that the U.S. right’s obsession with guns has more to do with social and economic insecurity and reactionary nostalgia than “defending freedom.” Ultimately, the individualism of late capitalism is as phony as its sense of community, for which patriotism serves as a shallow substitute.

Beyond the right-wing’s apocalyptic fantasy of civilizational collapse forcing a return to “rural simplicity,” a theme Thorpe explicates, we need a radically hopeful and humanistic vision for the future. Thorpe probably would agree that necroculture is combatted not through an alternative apocalypticism (merely destroying existing society, a temptation of some left-wing as well as right-wing rhetoric) but through revolutionary transformation towards a higher level of individuality and community.

Necroculture provides many bright flashes of insight into late capitalism’s decline, and Thorpe’s work with Fromm is refreshing. Perhaps because of the book’s ecological focus, Thorpe does not explore Fromm’s concept of humanism as a unity of theory and practice, as solidarity. Fromm’s humanism and his defense of a “humanized technology” (see The Revolution of Hope: Towards a Humanized Technology) might even suggest some potentially redeemable impulse within Moravec’s “transhumanist” vision of the future, but not at the expense of human agency and ethical practice.