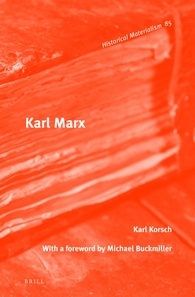 The republication of Karl Korsch’s masterly study of Karl Marx provides a useful reminder of the theoretical insights of the author, made during a period of major upheaval and debate among the then faltering international communist and workers movements. The book provides, not only an in depth examination of Marx’s core ideas and work, it is also to be viewed in many ways as a summary of much of Korsch’s understanding of Marx and Marxism. Ideas such as the principle of historical specification and Korsch’s own understanding of dialectics, political economy and historical materialism feature prominently.

The reissued edition contains a highly useful foreword from Michael Buckmiller (vii-xv) detailing the nature and purpose of the work itself in its original conception. Though I do not wish to dwell on this too much, it is worth pointing out that the book was published as part of a series titled ‘Modern Sociologists’ (vii). The aim of the series was to expand and popularise the theories of great thinkers in relation to the academic discipline of Sociology in the United Kingdom (vii). More detail regarding this can be gained from reading the foreword, it is worth considering when approaching the work that Korsch is both engaging throughout with Sociology and also demonstrating how Marx overcomes the limitations of the discipline. The book is therefore not a biography despite the title, it is a theoretical exposition of Marx’s thought and work, structured by core thematic topics. Korsch provides detailed chapters on these topics starting in an introductory style before moving onto more complex ideas.

It can be said that Korsch’s life project was to argue that Marx’s work could only be understood when rooted in its correct historical context, and that this was what made Marx’s work not only different but ultimately superior (12-26). While Korsch discusses many ideas and themes in this book, it is the idea and theory of history that unifies the work.

Korsch, at the start of the book discusses the idea of `The Principle of Historical Specification’ noting the necessity and importance this had for Marx. As Korsch notes ‘Marx comprehends all things social in terms of a definite historical epoch’ (12). The Marxian conception of society according to Korsch rests with an understanding of the specific character of capitalistic development and how this is then constituted in the present epoch (13). This means first of all not accepting the notion of most bourgeois thinkers in treating many modern categories as eternal but rather viewing them as specifically constituted through the capitalist system. Marx did not view or treat categories such as exchange or commodities as eternal (16) but rather as ever changing in meaning and value dependent upon the historical conditions in which they existed. Thus for Korsch ‘Marx’s study of society is based upon the recognition of the reality of historical change’ (33). The grasp and understanding of historical specificity is what sets Marx’s work apart for Korsch, it takes him beyond a mere descriptive account of capitalism by locating its historical evolution and constitution.

This point ultimately feeds into all of Marx’s work on society in general, the idealist phase of his early work had ultimately failed to grasp the significance of how history unfolds and societies change. For Korsch, the move from Marx’s earlier philosophical idealism to his later scientific materialism is grounded in his understanding of history (51). This is based around the genesis of drivers in societal history. Marx, when viewing capitalism, noted its class based dynamic alongside property and ownership rights, in order to fashion a perspective of how this came to be; and this meant analysing these concepts but also appreciating their constitution in the historical epoch. The failure of bourgeois thought did not solely lie with its description of capitalism, but rather a failure to appreciate the historical and revolutionary process that had brought capitalism into existence (169). Thus Korsch notes that Marx ‘defined all social phenomena historically, and, indeed as a revolutionary process which results from the development of the material forces of production and is realised by the struggle of the social classes’ (169). This synthesis of factors sums up Korsch’s interpretation of Marx on history, that is to treat the above concepts holistically and to recognise the necessity of historical change as the determining factor in their character (50). Thus the nature of one society is based upon the revolutionary manner in which it has transcended the previous one. Bourgeois society and its ideology is a rejection of feudal and aristocratic society and while those forms can linger they are ultimately eradicated.

Korsch sees Marx’s work as a theory of society in general, the theoretical propositions Marx developed were drawn from an idea of society taken as a whole. Korsch having witnessed the devastation of the workers movement in Germany and beyond, never lost sight of the significance of Marxism as a critical conception of existing society in all its forms. Marx was never atomistic in his investigation, the premise of his entire work was that only a theory of society in its entirety was fully capable of understanding and then revolutionising that society.

For Korsch, Marx opens up the possibility of a change from bourgeois society to a proletarian society by revealing the fundamental antagonism at its heart. Communism is the recognition of the historical movement of society and the nature of its antagonisms (55). Korsch thus draws the link that is sometimes overlooked when reading works such as Capital, that the Marxist conception of society is always a revolutionary one. Marx’s political economy was and is always a critique of political economy. While he commended political economy as the supreme theoretical tool for understanding society he did not ever shy away from being critical of it as a bourgeois theory. Marx recognised the importance of theorising society, the critique of political economy was not simply a criticism, it was the idea of proletarian revolution as Korsch puts it (112). The scientific socialism of Marx and Engels never sought to decry the revolutionary ambitions of those around them, it did however point out that without a concise appreciation of bourgeois society, revolution would remain inconceivable and not progress beyond small insurrections (114). The praxis of theory and action always remained a central consideration of his work, one no doubt feels that when writing this Korsch is primarily aiming it at the sociologists of the day, his target audience.

The context in which the book was written no doubt played a part in its content and tone, Buckmiller alludes to this in the foreword. Korsch by now on the run from Nazi Germany opens with a quote from Marx’s letter to his friend Arnold Ruge in January 1843 ‘In Germany there is now nothing I can do’ (1). This seems an obvious choice given his circumstances at the time, it also incorporates much of what Korsch’s study is about. The movement in its practical sense was over in Germany and other parts of Europe. The moment had passed, it was time, as Marx had done during his life, to reassess and to investigate what had gone wrong. Much of what Korsch wrote and the concept of historical specificity is a direct criticism of how international communism had conducted itself during the twenty years since the Bolshevik Revolution. Korsch had never ceased to criticise the ideas of much of the Communist International nor his previous party, the Communist Party of Germany (KPD). The book reminds us not just of Korsch’s original insight into Marx’s work, it also reminds us of the optimism and failure that marked the period. Korsch writes in a tone that continually emphasises the power of Marxist analysis; however, it is constantly drawn out against the problems of how it has been interpreted and misused.

There can be a presumption that since Korsch wrote consistently about historical specificity and context there is little to be gained from reading him today. There can be no denying the importance of history in Marx’s work. Korsch was not the only one to understand this, Marxism has always engaged heavily with the idea and theory of history, from Walter Benjamin to G.A. Cohen and Korsch’s understanding of history forms part of this lexicon of work ,. Korsch recognised that a lack of grounding in the practicalities of any context would lead to a situation where revolution and communism would simply be assumed to take on the form of what had happened in Russia, this was a constant source of frustration for him in Germany.

History for Korsch was a pivotal idea in the Marxist canon, if an understanding of it was fully comprehended by the workers then decisive action could be taken and a revolution would be potentially possible. Korsch understood the applicability of the Bolshevik model in Russia owing to the historical context of its society. However, Korsch was always critical of attempts to apply this model in a manner that did not suit the context or country. For Korsch, this point had become lost in the official doctrines of Marxist-Leninism. What had once been a dynamic theory of society and how to change it, had now stagnated, following years of poor decisions and theoretical conformity. Korsch was never a conformist and his book on Marx is in itself a useful reminder of the critical views of official communism put forward in a time when such ideas were dismissed and those who put them forward were castigated for heresy.

To read Korsch is to be reminded of Marx’s critical faculty and capacity, it is also to understand the importance of history and how we interpret it. To critique bourgeois society is to critique its history and how it is presented. Korsch remains as important now as he did then and the need to critically engage with bourgeois society’s ahistorical discourse is vital. History cannot be simply left to those who would do no more than declare it at an end in present bourgeois society.